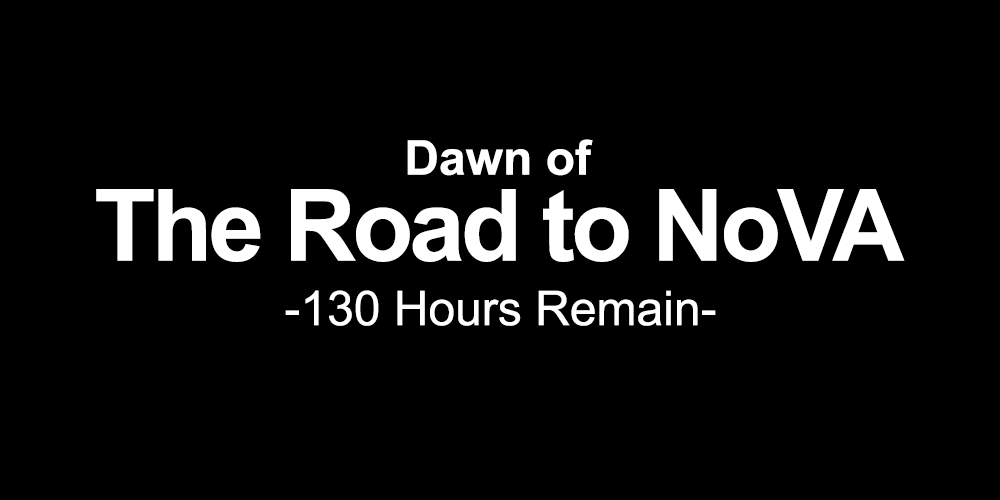 The 2019 NoVA Warhammer 40,000 Grand Tournament starts on Friday, August 30th. That means that between today – June 3rd – and the event, I have 87 days to have an army painted and ready to go. During that time I’ve got a 7-day vacation planned with friends, plus I’m bound to lose a few days when my in-laws visit, a few days to work travel, and a few days to other stuff. Let’s call that 20 days where I can’t paint or assemble things at all. If I assume that, conservatively, I’ll average 2 hours a day on hobby time between now and NoVA, that leaves me 134 hours of hobby time to decide what army I’m bringing and get it painted and ready to go.

OK hold on — let’s rewind a bit and talk about why this is a problem. (cue ocarina music)

My Original Plan for NoVA 2019

I didn’t really post my list last time around in favor of talking about the Red Corsairs I was working on. That’s partly because it was in flux and partly because I wanted to show off some models. The list I was planning to bring was a riff on the Forgeworld stuff list I wrote up with One Wing in our Vigilus Ablaze article a couple of months ago. Specifically, this was the plan:

I don’t have points up there but that comes out to less than 2,000 points and would probably take an additional unit. The general idea was to use the Kytan’s LEGION keyword to get buffs from the Dark Apostle, Lord Discordant, and Abaddon, and to make the Supreme Command detachment a Soulforged Pack to allow the Kytan to Advance and Charge. Overall I liked the strategy OK, and had just picked up a Kytan to start assembling once I’d finished the Red Corsairs detachment.

Now because I’m a dumbass moron, I decided I wanted to use new Abaddon and only new, swole chaos bois for my NoVA army, which functionally meant painting a whole new force from scratch. Taking what I’ve already got painted in that list (about 50 cultists), my painting list for NoVA looks like this:

That’s not too bad, but it’s cutting things real close when I know that I’m likely going to have more shit come up that will stop me from putting in all the hours I need, and that’s before I have to deal with stuff like multiple days of rain and excess humidity preventing me from priming something on schedule. It also doesn’t account for the fact that I need to get in at least 3 to 4 practice games before NoVA, which will take another 10 to 20 hours of time from my schedule. So look, it’s definitely doable, but it’s not a small task at this point and it leaves me essentially no time to paint anything that isn’t going to be part of my NoVA army. The upside is, I’ve already finished 7/17 Red Corsairs before writing this (more on that later), so I’ve at least made good progress on that particular detachment.

You may have noticed there’s a lot of past tense in those sentences above. That’s because, my whole galaxy brain plan to use a Kytan was written up before… 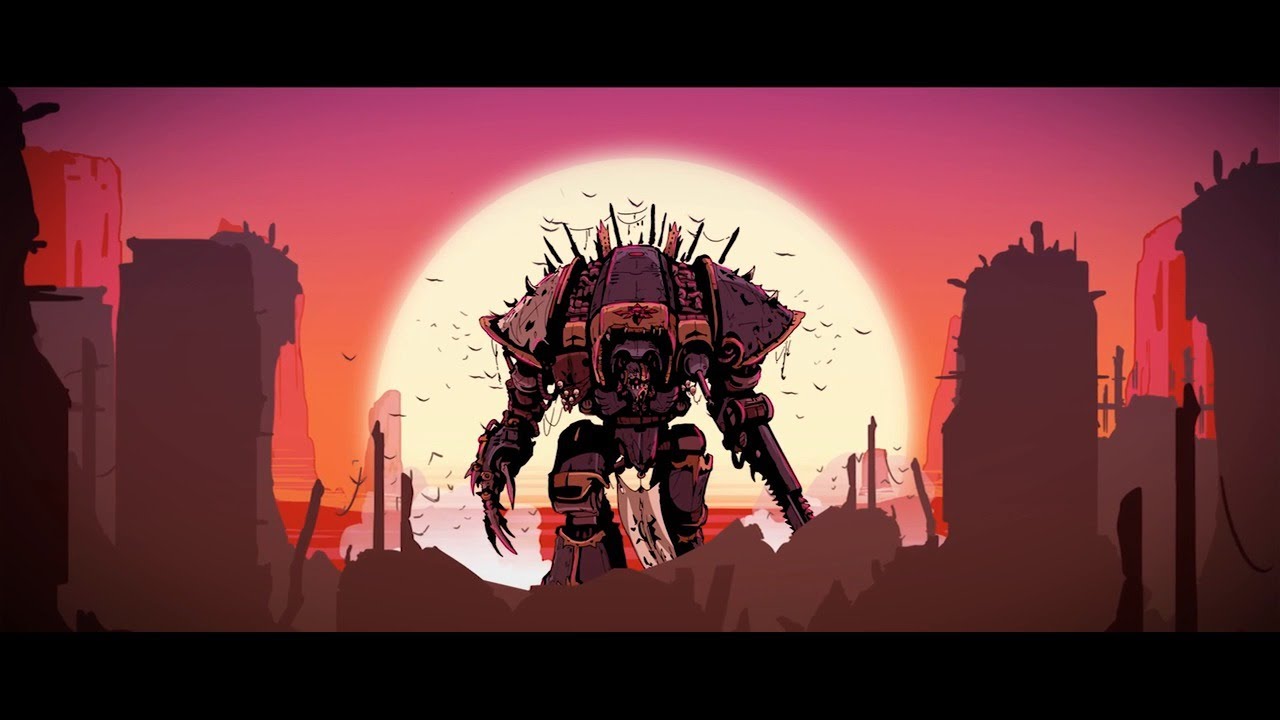 I mean, don’t get me wrong — it is extremely cool and good that they are doing Chaos Knights. It just sucks for my list-building plans. The whole point of using a Kytan Ravager was that the Chaos Knights, having access to only two stratagems and a single warlord trait, were theoretically inferior to a Legion-keyworded Kytan that could take advantage of buffs from Black Legion characters and the Daemonforge Chaos Space Marines stratagem. If the Chaos Knights get access to an entire host of broken-as-hell new strategies (they will) and sweet new knight weapons (they will), then they’ll likely blow the Kytan out of the water power-wise, and also give access to a 3 CP-generating Super Heavy detachment. At this point I pretty much expect that the Chaos Knight codex will warp the meta entirely thanks to Chaos’ ability to have really good CP generation from Red Corsairs detachments, but how much they’ll warp the format will depend on how much Games Workshop wants to move the new kits, I suspect.

I also have to admit that even from a painting/modeling standpoint, a Chaos Knights release theoretically doesn’t suck *that much* for my plans, because as it turns out, I brought a chaos knight and two chaos helverins to NoVA last year, and I’ve mostly finished another double-gun Chaos Knight, giving me already a full detachment I can work with (albeit one with shitty gun choices, I’m sure), and painting a knight is as easy as painting a Kytan Ravager, so making the switch will actually save me a lot of hobby time.

As a refresher, here are the knights I took to NoVA last year, which included two converted Helverins: 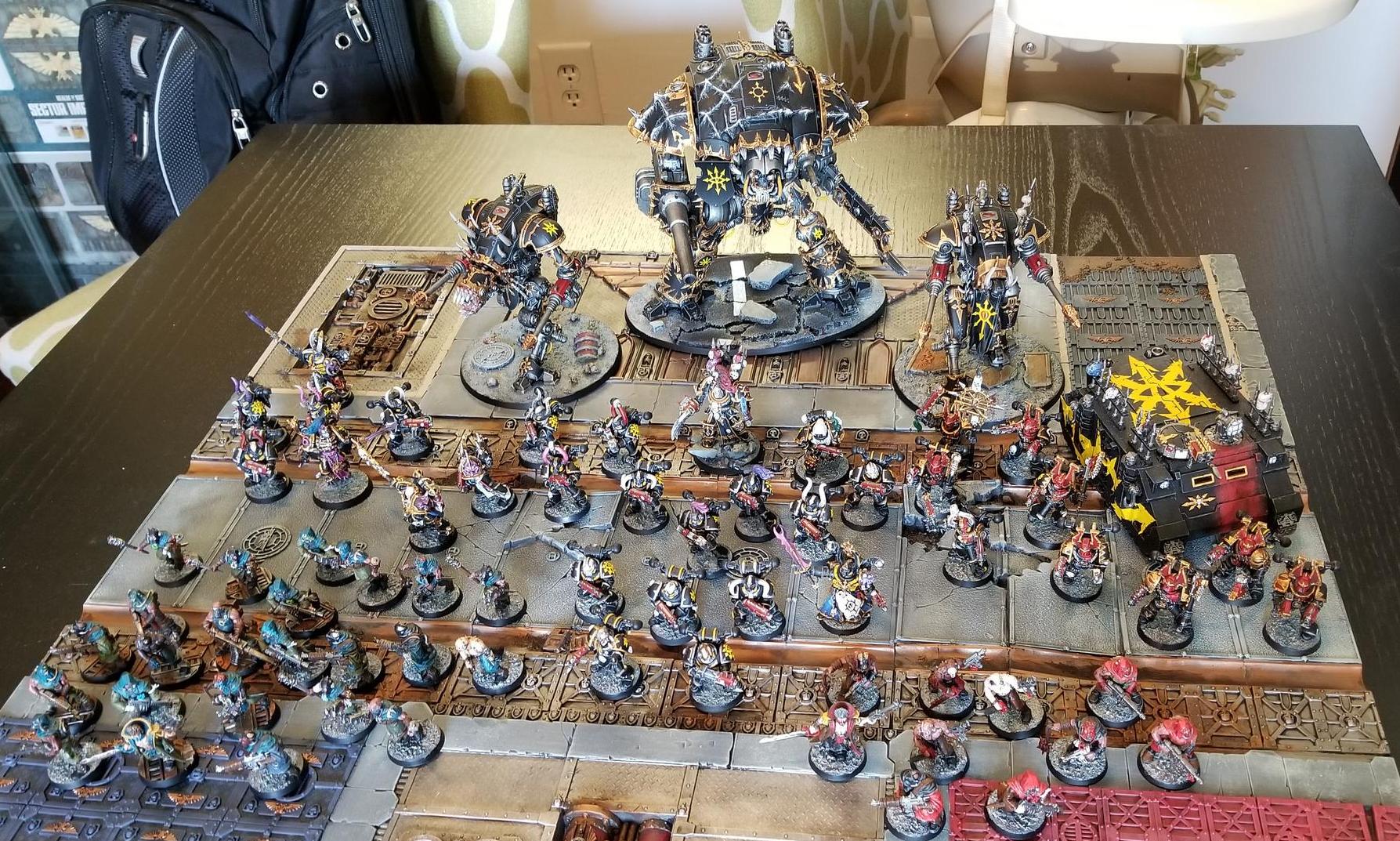 And here’s the newer knight I was working on, which I’ve dubbed “The Slaughterknight,” and which you may or may not remember from my oldest posts on Goonhammer showcasing works-in-progress. I’ll post some finished photos of this guy if he makes the final army list. He’s geared out for ranged combat, but like my other Chaos Knight he’s likely to be outclassed by the new options in the Chaos Knights codex in a way that will almost certainly make all of my work on him completely worthless. 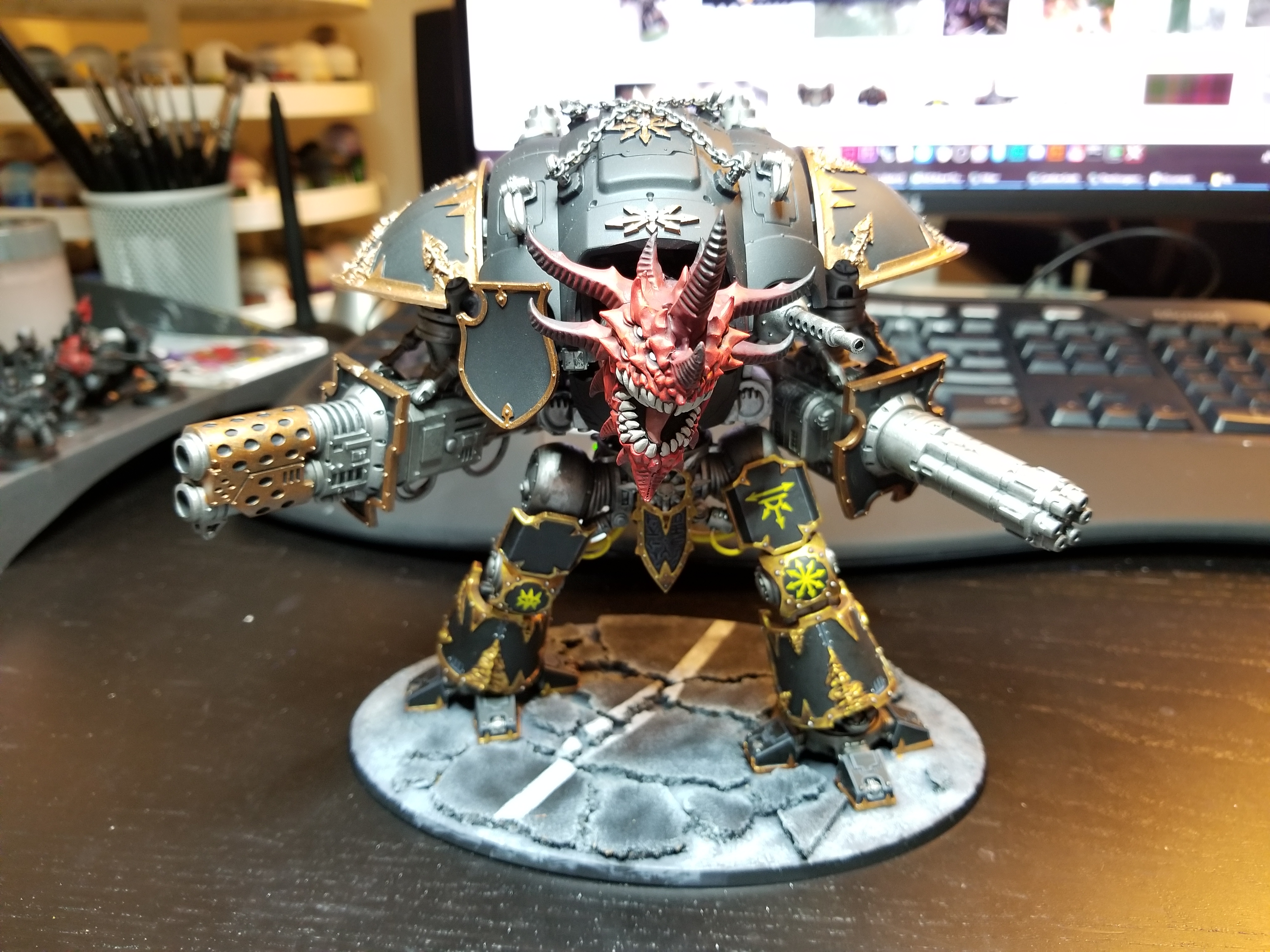 Speaking of final lists, I can’t really plan for a Chaos Knights release without seeing the models, but if I do end up running knights, right now I expect my list to change to be something like:

Plus or minus a few extra things, cause that one’s very light on points compared to my Kytan list, but the upside is that it has more CP to play with (21 CP) since it gets 3 from the Super Heavy Detachment and doesn’t have to burn any on specialist detachments. It also doesn’t really leave room for a Lord Discordant, unless I want to give up a Sorcerer or a Dark Apostle (and the free warlord trait they’d get from Council of Traitors), which I really don’t, unless I paint him as a Red Corsair, which I really don’t want to do. Maybe I can magnetize his shoulder pad, though. That’d give me an easy way to swap him out and if I paint his cloak red he’ll pass as a red corsair pretty easily. If I make him a Red Corsair, that’ll likely mean that I’ll push more models into that detachment though, to get another daemon engine in there. I really don’t want to do that, though, because that puts me too far down the road of “having a Red Corsairs army” and that’s something I really do not want to do right now. I’d rather they just be a 17-model add-on to my Chaos Space Marines that I roll out for serious(tm) games.

So the bad news is that I’m still not sure what I’m taking to NoVA and a lot of it will be up in the air for another month or two as I wait for Chaos Knights to come out and a few more tournament results to come in, giving me a better idea of what the meta looks like. The good news is that I’m making pretty good progress on my Red Corsairs. First off, I finished painting my Huron Blackheart conversion and I’m pretty satisfied with how he turned out. 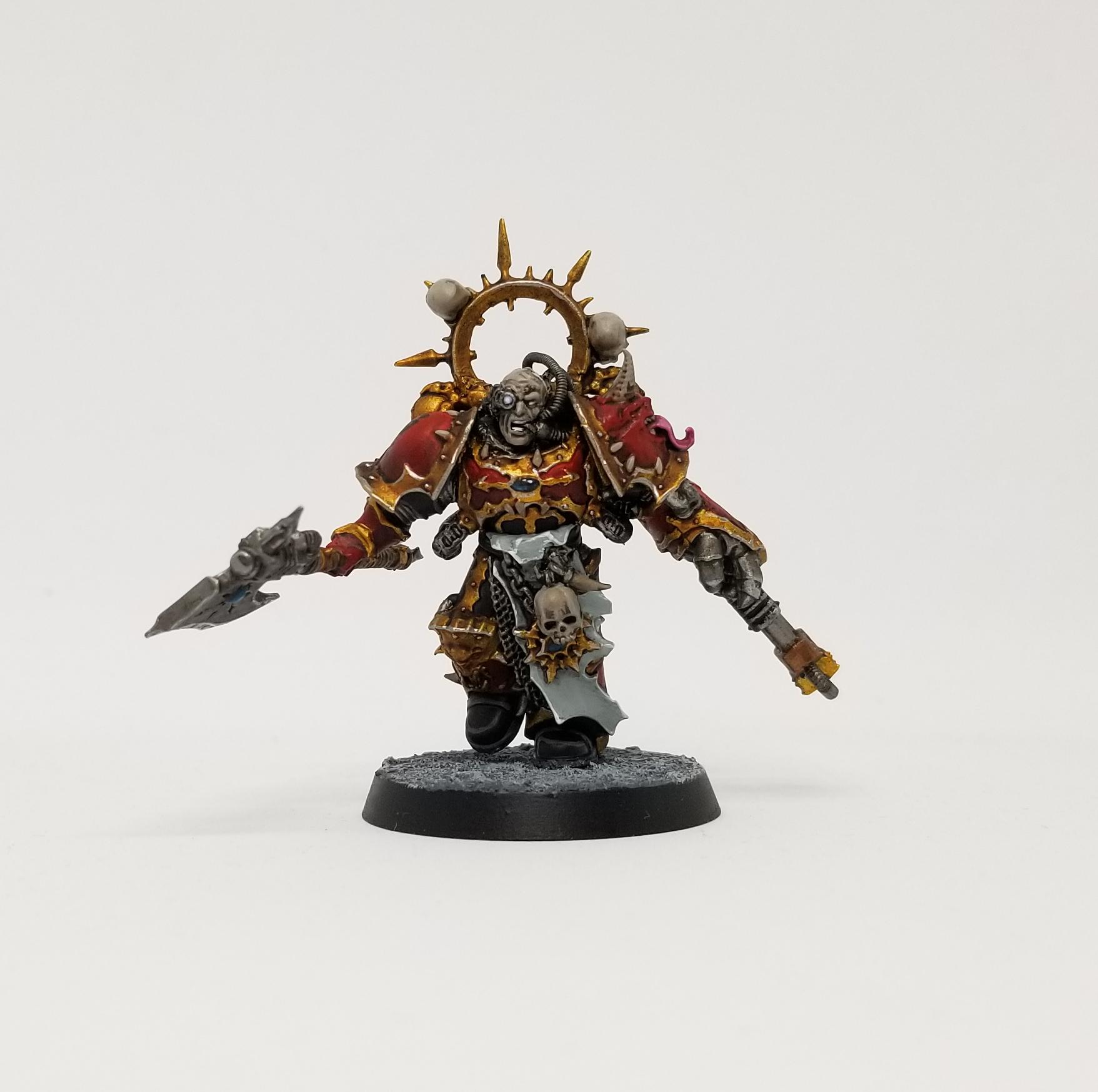 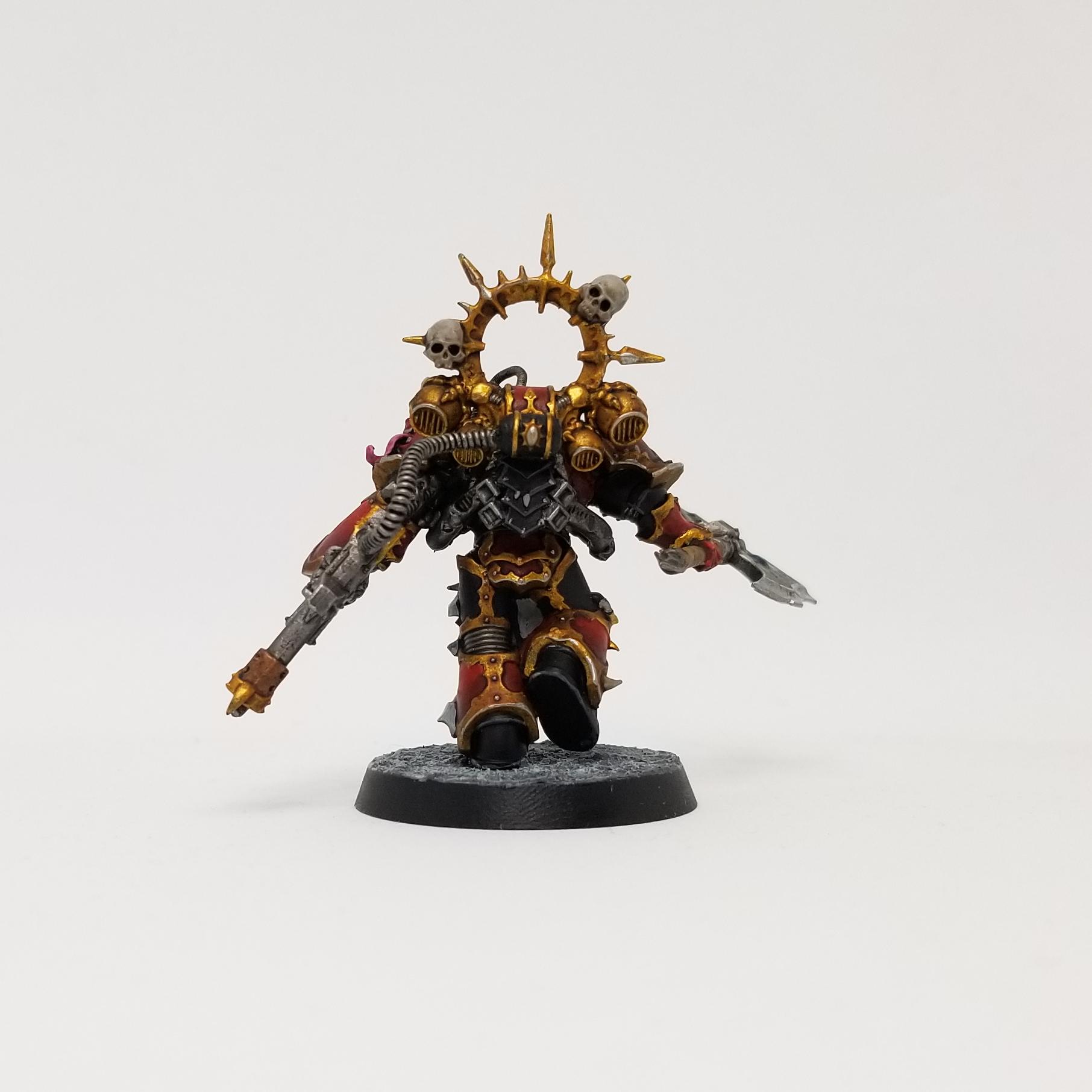 I’ve also finished the Jump Pack Sorcerer, the other two Aspiring Champions, and two of the Chaos Space Marines. I’m less satisfied with these overall, but that’s also because I’m spending a lot less time on them in an effort to push them out, so they’re getting a kind of half-speedpaint treatment in terms of quality. The upside is that I’ve settled on a Red Corsairs scheme I like, which I was worried wouldn’t happen. The way they’re done in the codexes and  materials they can kind of come across as looking a little too much like harlequins (the real world stuff, not the 40k faction), and a little too wonky. What I’ve settled on is doing red greaves, chest plates, shoulders, vambraces, and helmets, with black trim on the non-helmet red areas and metal trim on the black areas. 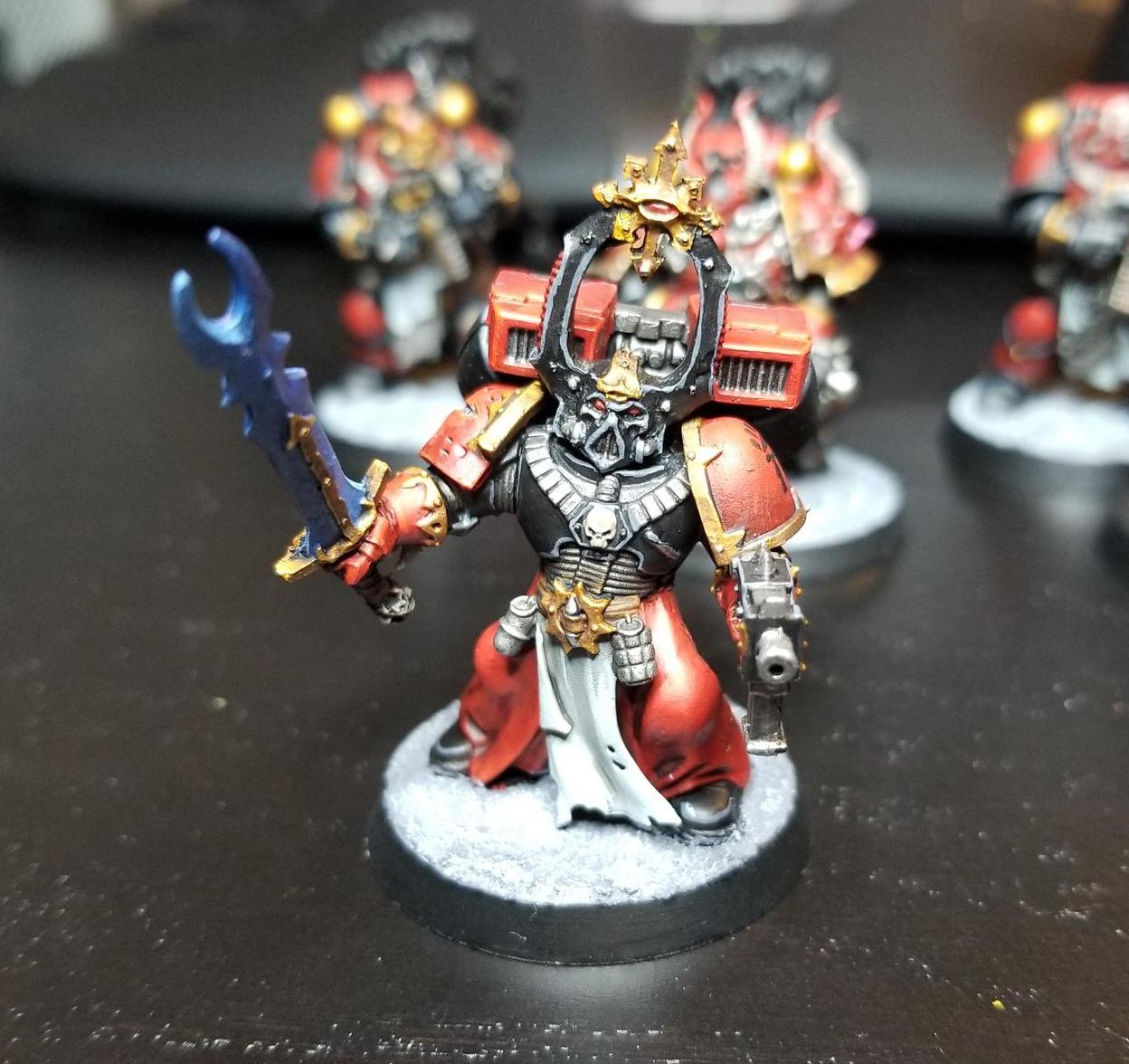 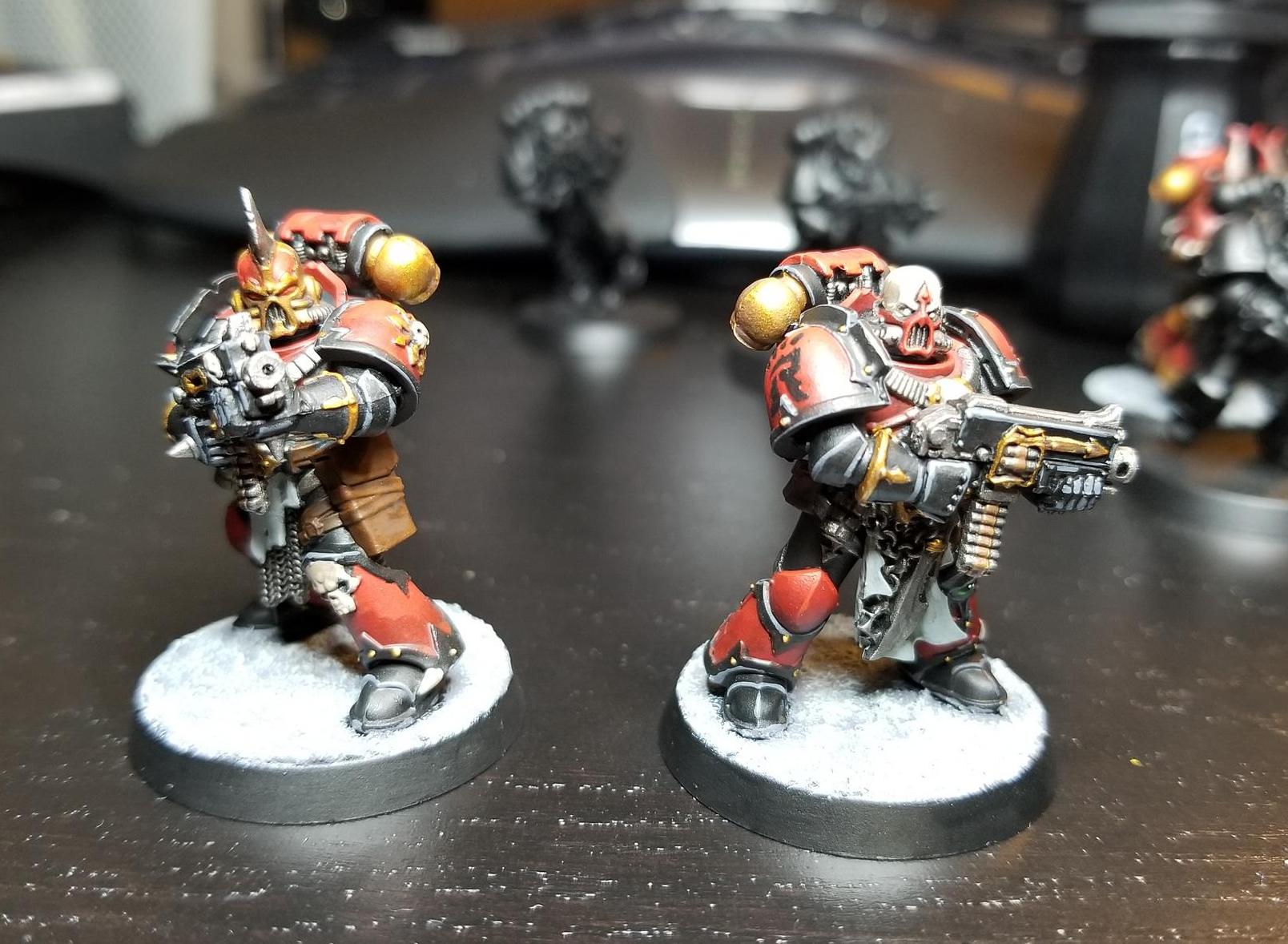 The Aspiring Champions, who get a bit more gold trim 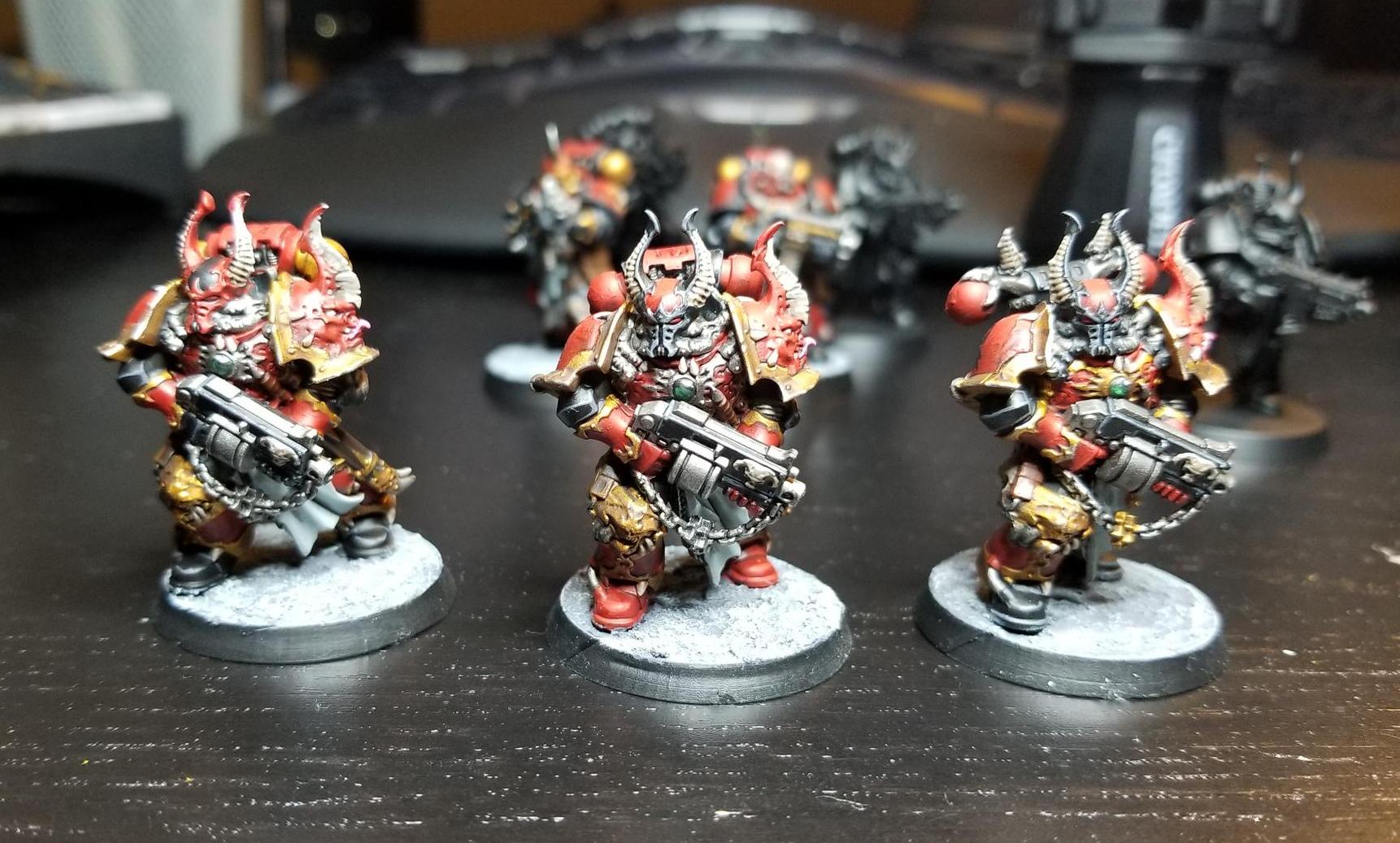 Going off my original goals, that means I’ve only got 10 guys left to paint in my Red Corsairs Battalion, and four of those already have red down on them. Here’s the pile progress before I put coats of red down on two more mans:s 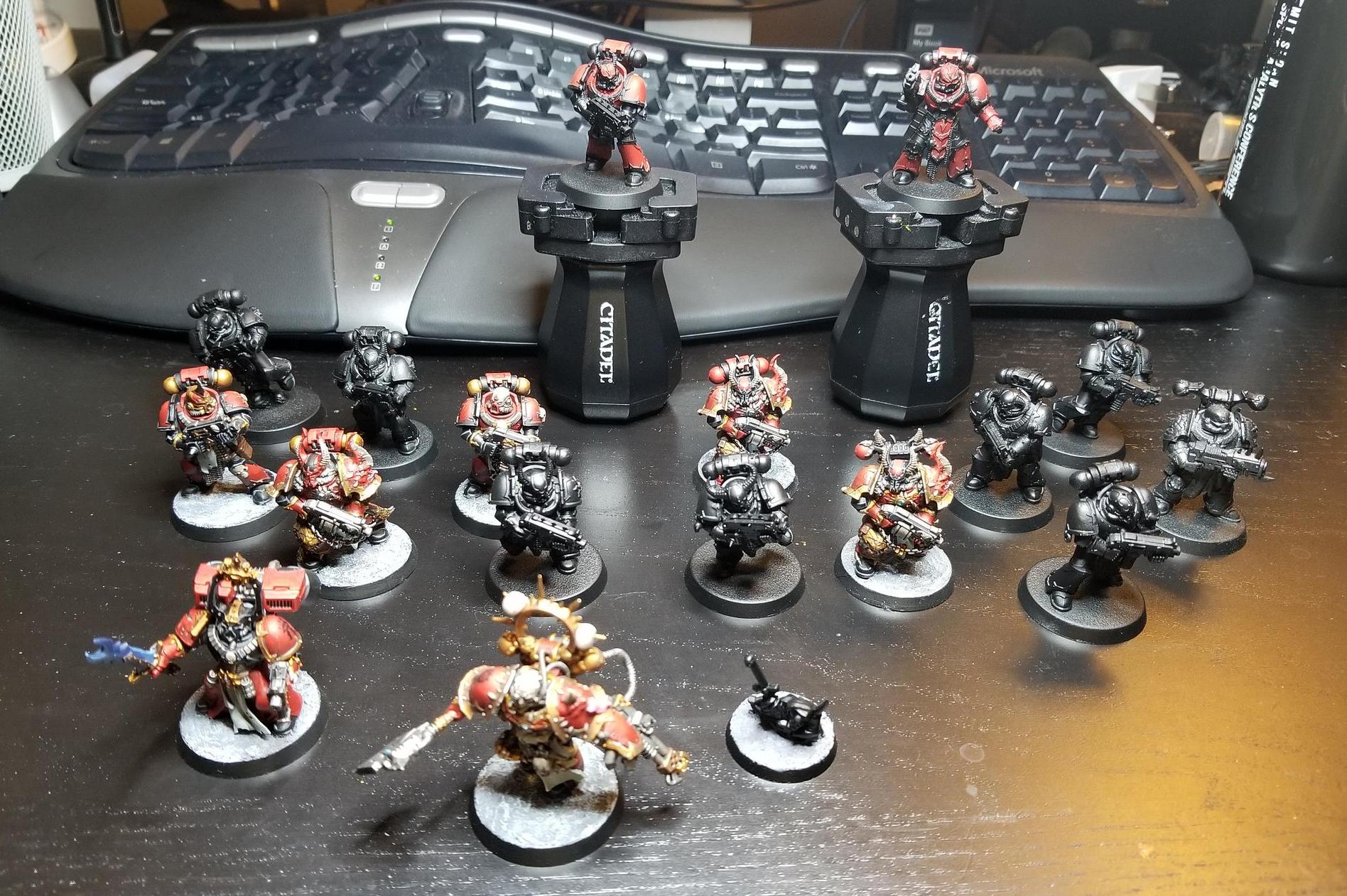 Hey, I just might be able to pull this off after all.

Join me in another week or two when I review additional progress on my Red Corsairs and buckle in to analyze the meta and what my options look like. At this point I can get away with ignoring most of those questions because I know that the Red Corsairs will 100% be part of my final army so I can punt on everything else but as we get closer to the event and better strategies materialize I’ll have to nail more of that down.