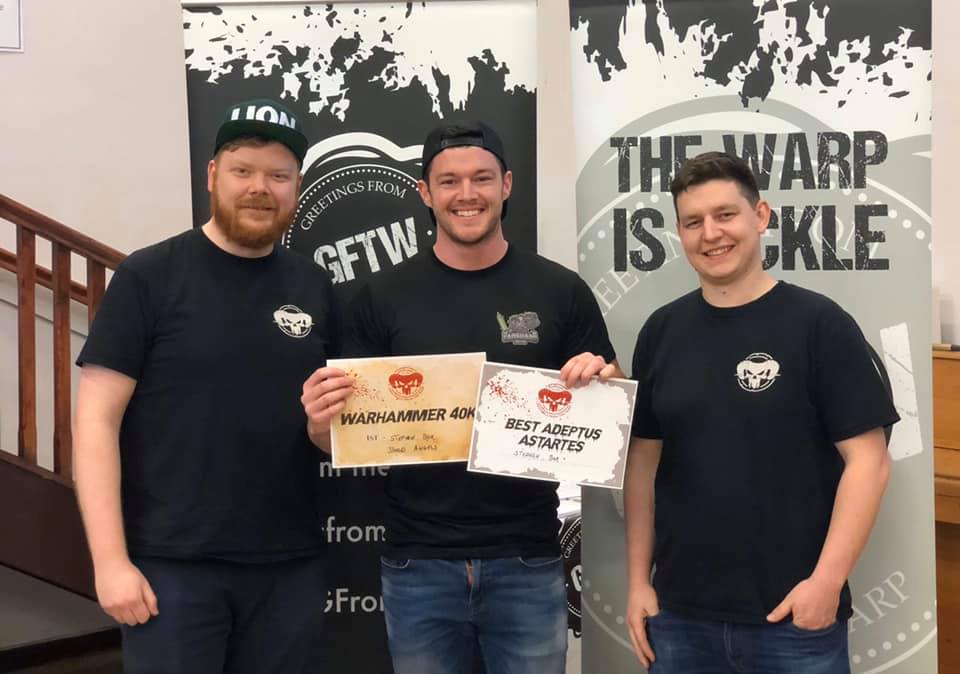 We previously covered Stephen Box’s Blood Angels in our LVO preview, and it was clear then that it was only a matter of time before he’d be able to pilot the list to a win. In this week’s interview, we sat down with Stephen to talk about his success at the recent Warp Storm GT, and his thoughts on running Blood Angels.

Goohammer: Hey Stephen, thanks for speaking to us, and congratulations on winning the Warp Storm GT. First up, tell us a bit about yourself.

Hey guys, thanks for the interview and the feature, I really appreciate it. I’m a big fan of Goonhammer and love the articles you guys do.

So me, I came back to 40K during the dawn of 8th edition and for me I needed an outlet that wasn’t fitness or bodybuilding, I had just won the IFBB European Fitness Model championships and needed something else to focus on for my mental health. 40k gave me that time away from my laptop and helped me destress.

My background has always been competition, I have played international and national level volleyball and a very good standard of hockey, so sportsmanship is something I have ingrained into me.

This was the reason I started my channel Vanguard Tactics. To not only help improve the standard on the table but also off the table.

Talk us through your list – how does it work, what’s your general game plan? Are there any specific match-ups where it’s stronger or weaker?

This is the first list I have ever run that I could see myself playing for the next 12 months. I can’t tell you how much fun it is. I think I love it so much because you live and die by every decision. A wrong move and it’s game over. The wrong move from my opponent and it can be game over for them. The skill level to wield this list is what excites me most. It works by threat saturation. You have to screen and zone me out in the backfield but without giving up the board at the same time. My list can be extremely “killy” if you make a mistake, but often I wait and bide my time. I look to take control of the board, and then in true Spartan style when I go on the offence the entire army moves as one, saturating the board with threats my opponent has too much to deal with.

T’au is a really hard match up [for me] as I can’t deal enough damage fast enough, along with anything that has a really good invulnerable save like Grotesques. The Blood Angels play well into most Marine factions like Iron Hands, Imperial Fists and Raven Guard. In 17 tournament games I have only lost to the Brohammer list with added Impulsors – which stop my wraps and charges – and I lost to Imperial Fists with 5 planes and 7 pieces of artillery, and I went second in both.

One thing to note is that I do rely on terrain to hide from a lot of the power gunlines out there.

You’ve been running Blood Angels for a few events now, including the Las Vegas Open. Have you made any changes to the list over that time, or has it been more or less the same? This event was 1,750pts rather than 2,000 – how did that affect things?

I kept the list exactly the same for LVO where I went 4-2 and then Beachhead going 5-1 only losing to Vik with IH who won the event. The list at the time didn’t need changing, but my ability to use the list needed work. I didn’t lose those games because of my list, I lost those games because I made mistakes. I coach and teach people to look inward and improve rather than blaming their faults on other factors. But the 1750 forced my hand to change my list. I stripped out everything that wasn’t essential. I wanted the 3x Sanguinary Guard and the Death Company. A lot of people really hate the DC as they are a glass cannon, but they have won me so many games when used correctly. So I dropped everything that I didn’t use 100% of the time and TBH that mentality is something I am taking forward to my next 2000 point event and have changed the list again. I can’t wait to see what that does. It’s seriously gross.

How did your games go? Any particular standouts?

I was super pleased with how all of my games went, my list scores well on the secondaries and can outscore most armies on the primary objectives, focusing on achieving Hold More and the Bonus. A stand-out game for me was round 4. Both of us were 3-0 at that point and I was going second to Raven Guard. The table had no usable terrain for me to take advantage of so I made a decision at deployment that I think won me the game: I put every single model on the line and just took the hit from the Thunderfire Cannons and the Grav Cent bomb. But I knew if I could survive that turn, my counter would be so hard that I could screen out the board and take control. That’s exactly what I did and it worked a treat.

What’s coming up next for you? What events are you attending – and are you taking Blood Angels?

You’re not just well known as a 40k player, but also as a content producer in your own right, with the Vanguard Tactics YouTube channel and the Competitive Warhammer 40k Podcast. What inspires you to create this kind of content?

(Editor’s Note: You can find Stephen’s blogs, podcasts, and free courses at www.vanguardtactics.com)

At first I wanted to see if I could produce something unique in regards to battle reports that focused on just the tactics and strategy rather than dice rolls and general game play. This went down really well with my commentary at every stage of the game. But I really fell in love with making content that helped give back to the community, like my videos and podcasts around sportsmanship. I’m not afraid to speak out and speak for those of us that can find conflict a struggle. My message is that I just want everyone to feel confident and comfortable at the table top.

I trained to be a teacher and have been coaching athletes’, bodybuilders’, and actors’ nutrition and training for the last 10 years, so breaking down complex information into something simple is what I strive to do with all of my content to help people improve their skill at the tabletop.

In what’s probably one of your most famous videos, you focused on bringing to light some cheating issues in the community and working to bring about positive changes in the competitive scene. Do you feel like those changes have gone far enough, or do we still have work to do? How would you like to see persistent cheating dealt with in future?

Yeah I couldn’t believe quite how far it reached, to be honest. I had no idea what would happen. But it certainly started the conversation around sportsmanship. My video isn’t about naming and shaming as that’s not my style plus its irrelevant. The point of the conversation is that currently we do not have the infrastructure to deal with people that are persistently “cheating” or being poor sports. The competitive community is growing and there is a tiny percentage that can ruin it for others. I brought light to an issue so that those who have been put off in the past now know something is being done, processes are being put in place to ensure everyone has a good time. Have we done enough? We haven’t scratched the surface yet, but we will get there. But it will only get done if people can be respectful, speak up at the right times and to the right people.

Finally, and zooming out a little bit, how do you feel about current 40k in general? Is there anything you’d like to see changed?

To be honest, the game is actually in a great place, yes there are issues with IH and IF with their win rates, but on the whole it’s moving in the right direction. The guys at Frontline Gaming are doing wonders with the ITC singles mission pack, the WTC are moving team events forward like never before and GW have upped their game in regards to conduct and sportsmanship at their events. The only thing I would change, is again, something in regards to misconduct at events, a process put in place to track and reprimand those players that breach rules constantly. These are your typically win at all cost players and if their precious points were taken away from them then maybe they may think twice.

Important question for you: Seize or No seize?

To be honest I think I prefer it without.

Thanks for taking the time to talk to us today!

No worries at all and again thanks so much for having me.

You can find the rest of Stephen’s blogs, podcasts, and courses at www.vanguardtactics.com. And as always, if you have any questions or feedback, feel free to drop us a note in the comments below, hit us up on Facebook, or e-mail us at contact@goonhammer.com.