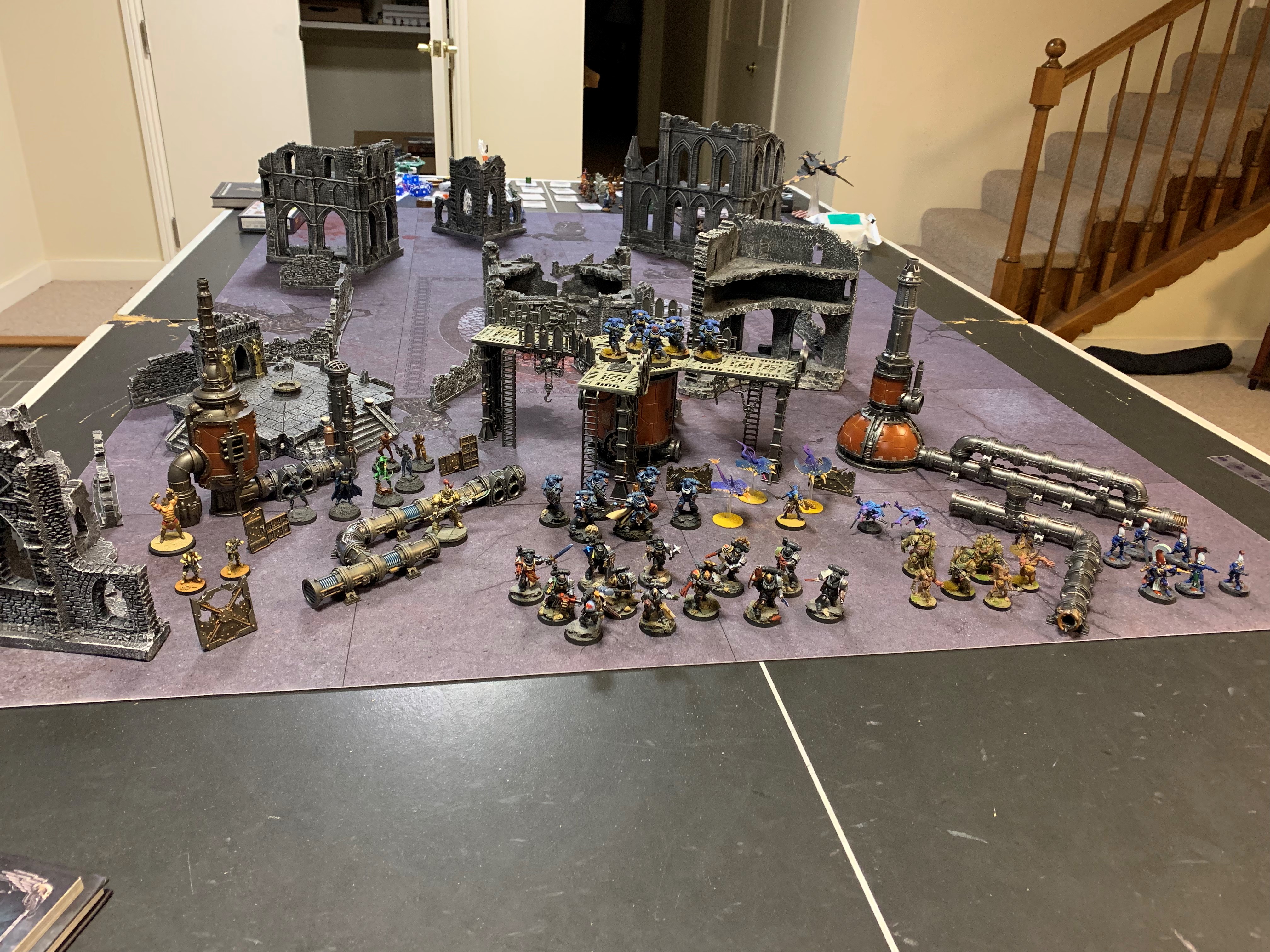 Inspired by the many talk of accomplishments for the year in the Discord but having quit the forums, I decided to post my review here on ye olde goonhammer. While it feels like I did fuck all in 2018, I did apparently manage to paint 53 models, which seems all right for my first full year in the hobby, particularly given how turbulent this year was career-wise. So without further ado, here’s the full spread, including the KT mechanicus terrain (which I guess bumps the number up): What you may immediately notice is that this is not an army shot. It is pretty obvious I have trouble sticking to projects. The most consistent was my Deathwatch Killteam but even that petered out. With Adepticon looming and strong plans for NOVA, I am hoping this events will galvanize me to get full armies done and have both more models and more cohesive models to show off at the end of 2019.

The Odd Ones Out

I started the year playing Batman The Miniature Game, which is a fantastic skirmish game but honestly I don’t enjoy painting the models, which is why the paintjobs are all pretty sloppy. While ostensibly a much larger scale than 40K, at 35mm, the more realistic proportions result in much finer details and Knight Models suffers from terrible QC and poor casting, which makes painting these guys a slog to me.

I also briefly tried my hand at Infinity and Arena Rex. The Infinity models are fabulous and crisply detailed despite being true 28mm. But without a strong game scene and no event plans, my interest here quickly fizzled. And while the models are great, I just don’t enjoy painting them like I do GW stuff. It’s a similar story for Arena Rex, where the models are really fantastic but if it’s not GW, I’m just not that interested.

I did a bunch of one-off models as I toyed with ideas for new armies. Of these, I hope Custodes actually come to fruition in 2019 as I’d really like to get a nice Imperial Soup army completed in the coming year. I feel like it will allow me a lot of painting variety as well as the flexibility to field different forces of varying effectiveness on the battlefield. One of the things I’d really like to see happen in 2019 is more 40k games played. I played a ton in 2017 and almost none at all in 2018, for a number of reasons and I’d like to change that. With Kill Team on the way, I quickly whipped up a Death Guard Kill Team, which never saw the table as the difference in point costs meant this wasn’t actually 100 points. This was my first foray into dipping and while there is no quick way to paint Death Guard thanks to all those god damn details, I was pretty pleased with the results.

The brunt of my Kill Team hobby time was on my beloved Deathwatch. I’d originally planned on making an army out of these guys but lost interest given Marines’ perceived weaknesses on the table. While not a powergamer per se, I also am loathe to field anything to is trash tier. Though perhaps my perceptions were wrong and also CA has done a fair bit to improve Marines I’d like to think. Regardless, these guys were so much fun to paint, with each model essentially being a character with his own unique backstory and details. I briefly joined a local KT campaign and because almost everyone was fielding space marines of a sort, I decided to go GSC and even managed to paint up two little friendly buggers. I started the year in 40k painting blue dudes, namely my Crimson Fists. As the only Mexican Space Marines, they naturally appeal to me, but the unviability of an all Primaris force dissuaded me from continuing. Fortunately, Vigilus and White Dwarf have really reinvigorated Pedro’s Crew and I hope that Captain Ramirez will see some action in 2019 as part of my planned Imperial Soup. I have learned a lot since painting these guys, as they were done in January or February and it will be interesting to revisit the Fists next year and see what I can do.

Near the end of the year, I also went back to my Eldar briefly. I played these guys a lot last year but paradoxically stopped because they were too good, or were at least perceived as such. My local meta is pretty soft and I got tired of everyone complaining about playing Eldar, so I just sort of stopped playing. Since then, people have moved away and the meta has maybe toughened up a bit, plus I’m more focused on events than local stuff, and so I decided to jump back in to the Eldar. I had lots of Eldar plans but these were disrupted when I was invited and accepted to join TEAM ULTRAMARINES at Adepticon in 2019. So the Space Elves have been put aside once again so I can focus on other boys in blue, the proud sons of Guilliman and best space marines ever. Working on these guys has been very exciting, as I am pushing myself to work on weathering and battle damage, which is uncharted territory for me. I currently have a batch of 16 more intercessors on my painting table and hopefully they will be ready to showcase soon!

Up next is getting at least 1K of Ultras ready for Adepticon at the end of March. With luck I can have 1500 so that the Friendly and Gallant can also be Ultras, but we’ll see. After that I will probably take a break to paint non-army stuff, maybe Rogue Trader or Blackstone Fortress, and then decide what else 2019 holds based on what my plans for NOVA 2019 are.

Here’s to more models next year!