In today’s article we’re joined by Jack Harpster from The Art of War, who will be providing their thoughts on Adeptus Custodes.

The Adeptus Custodes were riding high after their new codex earlier this year proved to be too powerful for the meta to handle. Custodes proved to be the first in a series of four overtuned codices, each of which would turn the meta on its head upon their release. While the balance dataslate seems to have fixed the problems Harlequins and Tau presented to the meta while still leaving them as strong choices, the Custodes were not as lucky. Custodes were a highly durable army that got most of that durability by abusing Emperor’s Auspice and Arcane Genetic Alchemy, along with having a deep toolbox in Esteemed Amalgam and Martial Discretion. With the balance dataslate, three of those four faction-defining stratagems have been limited to one use per game and on top of that, the durability Stratagems are now locked to infantry-only.  Tack on the removal of Objective Secured from the non-troop infantry and Custodes are sitting in a rough place.

On top of that, the dataslate didn’t just push the broken armies down, it also improved previously struggling books, with the biggest change being the widespread gifting of Armor of Contempt to marines, Sisters, and Heretic Astartes. Custodes now face new, more difficult problems to solve on the tabletop as not only have they lost durability and utility but in the zero-sum game of the current meta they’ve also lost damage output. This leaves Custodes as a slow army with good but expensive stats, decent objective control, and a lack of ranged damage, essentially placing them in the Death Guard’s previous niche. There may be a build focusing on the forge world grav-tanks that solves some of those problems at the expense of others, but we’ll cover that more down below.

Lets look at how the faction’s matchups have shifted following the balance dataslate.

Custodes will thrive against any opponent who lacks the damage output to deal with their units in the middle of the board.  Eldar and Harlequins in particular are two armies that might have serious problems killing three shield guard in cover on an objective and can get blown out by fast grav-tank shooting

Custodes will have a terrible time against anyone who can blow them up at speed.  Tau still shoot too hard to handle and Tyranids have an exceptionally dangerous psychic and fight phase.  Certain marine archetypes may also give infantry based Custodes problems by being too durable to kill at range with Armor of Contempt and too hard hitting in combat with lightning claws now being far less susceptible to losing their rerolls.  Finally, Necrons seem almost unbeatable for current Custodes given they have no real way in their book to kill a reanimating Necron warrior unit. 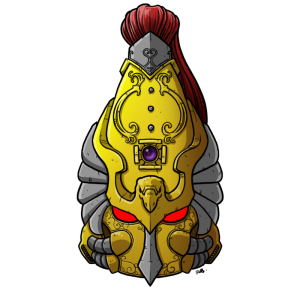 There are two approaches to designing a Custodes list that I see going forward:

Option 2 is particularly appealing because by attempting to speed the game up and table your opponent quickly, you may only end up needing each copy of the key utility stratagems during the game, mitigating the fact that you can only use them once. However, option 1 is a tried-and-true strategy for durable armies and while it isn’t flashy, can still win plenty of games. Both game plans want to be Emperor’s Chosen for very different reasons. The durability army needs to be able to survive in the center of the board in a metagame where the top armies pump out a ridiculous number of mortal wounds whereas the fast, aggressive army wants rerolls on units which otherwise would be unable to receive them.

This list is as durable as Custodes realistically get.  The dreadnoughts are a big ball of tough stats that pushes your opponent as hard as possible while the infantry dig into objectives behind them and start racking up a point lead.  The bike captain goes out on his own to solve problems or take objectives and Trajann and the Blade Champion provide close support for the Shield Guard and make taking objectives back tricky for your opponent.  While I think this list is less likely to make a top finish at a supermajor than the one I wrote for this site when the book first came out, I think the underlying game plan is a strong one.

This list is heavily inspired by the success of Ryan Snyder, who ran a unique six grav-tank list to high placings at many events over the last couple months.  I suspect he will continue to do so as this archetype avoided the durable, grindy, CP reliant game plan most other Custodes lists leaned into and thus avoided the worst of the nerfs.  The witchseekers hold back field objectives while every other element in the army sprints forward, attempting to gain line of sight to your opponent and kill them.  Even without defensive stratagems, this list presents many opponents with too many threats for them to deal with at once alongside crippling firepower.

That wraps up our look at Adeptus Custodes but we’ll be back with more Faction Focus articles looking at how things have changed. Stay tuned for more to come – we’ll have more from both the Goonhammer and Art of War teams covering a variety (but likely not all) of the game’s factions.

You can get more great analysis and insight from the Art of War by heading over to their site.