A Day at the Races: A Turn Order Review of Long Shot 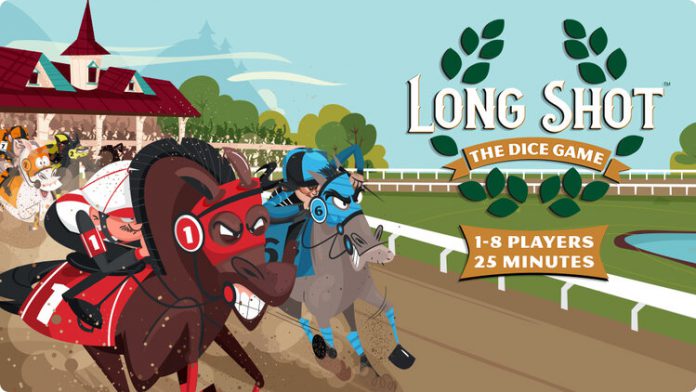 Horse racing, historically, is one of the oldest, semi-universal “sports” of human history. For some reason, humans really like watching horses run in an oval. While there are certainly debates over the treatment of horses, the weirdness of horse husbandry, exclusion of minorities and economic disparity between those who labor to race and those who simply own a horse, horse racing, in an abstract, is a shot of adrenaline where storylines can develop in the blink of an eye. Translating that experience to the tabletop is not always a success, as many types of racing board games can sometimes get lost in their own mechanics or attempts to create that tension through systems or design.

Long Shot, a roll and write game from Perplext, manages to do exactly what it says on the box: create the experience of a horse race that doesn’t overstay its welcome, presenting a quick, intuitive and fun game that does have a few little caveats along the way. Grab a mint julep and don’t worry about betting the farm as we dive into what makes this game work, and what you should consider before picking it up yourself.

“Take One of Those Every Half Mile and Call Me if There’s Any Change.”

Long Shot is technically a re-implementation of a game of the same name, but shaves off a lot of the “board game” aspects of the original and tightens up the overall package to make a quick playing and engaging little game. While roll-n-write, flip-n-write, etc. etc. games have been flooding the market as of late, Long Shot also has a lot of competition in a very crowded market. Thankfully, it manages to both streamline a larger game into something digestible, and understands roll-n-write games perfectly to create a game that really does play in about 25-30 minutes (in most cases; more on that later). In honesty, this might be enough to consider Long Shot a success simply on the merit of being a “quick” game that is actually quick, but let’s talk about what is really going on that makes the game work.

At the start of the game, each player (1-8) will be dealt a player board, dry-erase marker, and a starting card that gives them two things to get started with: spots to mark off on their BINGO-esque concessions track, 2 starting bets on 1 of 8 horses, as well as 12 dollars. After dealing out the 8 horse cards (the version I bought at Barnes & Noble contained 3 sets of horse cards, plus 1 extra mini-expansion, so four total), the game is ready to begin. If that seems like incredibly fast set up, well, it is! After playing an initial teaching game of Long Shot, I found repeated plays, even with new players, were lightning fast to set up and start, which is a blessed thing.

From there, rounds go in sequence, with the active player rolling two dice: one denotes a horse, the other how far that horse moves (1-3 spaces). Afterwards, horse cards are checked to see if other horses move as well (1 space), and then the active player takes 1 of the following actions based off the rolled horse: Mark a space on their concession board that matches the rolled horse, buy a helmet (allows player to bet on horses past the red line), jersey (allows the player to mark ANY horse on the rolled horse’s card to move when that horse is rolled), bet up to 3 dollars a turn, buy that horse (if possible), or use a Wild Card (3 total) to take any of those actions but on ANY horse. Once the active player has done so, each other player does so, and once everyone playing has taken one action, the dice are passed and the action repeats. While players can take their actions very quickly, there are some things that might affect actions taken, so it is important to make sure players go in order!

This mostly comes down to the use of the BINGO like concession board. Once a player fills a horizontal or vertical row, they can take a bonus, which includes things like buying a horse for free, taking free bets, and most crucially, moving horses backwards OR forwards. As powerful as that might seem, each bonus can only be used once, so strategic use and planning of when to ‘BINGO’ your concession can make or break a race; also, horses cannot cross the finish line with these movements, meaning that they are best used to jockey for position rather than try and claim an early victory.

Coming Around the Bend

While that seems like a lot of talk about mechanics, it is important mostly to establish how the game works to get to the real excitement at play here: since you don’t get to control WHICH horse moves, each dice roll can have explosive results on the state of the game. The horse you bought and bet on may suddenly just not move for turn after agonizing turn, until suddenly you use your bonus to shoot them forward 3 spaces, only to find out that another player has also bet on your horse, and uses theirs to send them towards the finish line… Only for another player to casually, without drawing attention, sneak their dark horse candidate into the winner’s circle by making quiet, calculated actions.

Or, alternatively, your table erupts in a madcap dash to make the horse that hasn’t moved all game to suddenly contend for first place, and it works, only for everyone to realize no one bought that horse OR bet on it, and your winner clears the game with barely 50 dollars to their name. Even sabotaging other players (or yourself) really has little repercussions, as the game is so quick and fast that players can’t hold grudges for long. And, since no one really ‘controls’ a horse specifically, actions like moving horses backwards or forwards isn’t quite as much of a personal attack as it might seem in other games, which helps to mitigate table conflict and fighting.

The best part about Long Shot, from my experience playing, is that the tension really does build to a crescendo the way a real race does. While early leads and non-moving horses may seem to spell out the ending ahead of time, abilities, simultaneous moves, and sudden, unexpected rolls turn the game into a literal madcap race to the finish. My table went from casually engaged to the game on active turns, looking at phones and idly chatting, to suddenly hyper-focused and yelling with excitement as the pack of horses all rounded the final corner. Horses went forward, touching the finish line, only to be sent back, then forward, then back, and then, suddenly, victory. Then the battle for second, and third, before moving on the scoring.

“Marry Me, and I’ll Never Look at any Other Horse.”

Overall, Long Shot was a blast. It was great to open a game, flip through the instructions, and have the game played and over within about an hour. On further plays, that time absolutely decreased, as players understood the rules and small complexities and kinks were ironed out in the overall experience of the game. I played this game at 4, and found that to be probably the max I would recommend, but I could see the game accommodating 8, just that I would not probably play it at that amount if I could avoid it. From experimenting a little, the biggest change in adding or subtracting players was that the game did not particularly go faster than it did otherwise, but the larger player count did increase slowdown. That said, that was about the only real negative. Aside from buying horses (which players likely aren’t going to be able to do more than probably twice except at smaller numbers), the actions taken by players aren’t restricted by what other players do, and Wild Card actions give players an out if there is something they really want to do on their own turn but the roll dictates otherwise.

However, something I noticed at 2 is that Long Shot becomes a strategic and almost bloodthirsty game, one whose tension is punctuated by hilarious rolls neither player wants. This turned the game into something I didn’t expect, but welcomed it quite a bit. Since only two people are playing, often both players were able to purchase 3 horses, nearly 4 by the time the game wound down to the absolute end (and players didn’t focus on betting). This made it more directly competitive about wanting ‘your’ horses to win, but the randomness of the dice made it so that, even with direct attempts at controlling winners, the result was unexpected and hilarious. One of my favorite two player games of Long Shot involved NEITHER players winning ANY of the top three slots, even with the use of BINGO spaces and abilities. 2 isn’t my favorite number to play Long Shot at, but it works quite well, as does the built in solo mode.

The box also comes with the aforementioned horse sets. There are 3 in the base game, and 1 current mini expansion (if you find the game at Barnes & Noble, it includes it, can’t speak for other retailers). These alter horse abilities, but nothing else (price, odds, simultaneous horse movements), and the box suggests playing with each set a few times, and then shuffling or dealing them out randomly. I really liked this variability, as the powers are not game breaking, but game influencing, making all of them fun or interesting to try at least once. Being able to mix and match the sets after trying them out was similarly nice, adding a lot of variability to which abilities might appear.

Honestly, Long Shot was not the game I expected to be reviewing next, but it’s currently the game dominating my table. It’s fast, simple, and accessible, making it a great time. It has yet to overstay its welcome, and the set-up and tear down time of it make it so easy to cart around that I’ve found it a great choice for getting to the table. Also, it looks great–the colors are bright, the horse tokens are fun to play with and move around, and everyone at the table can get excited and involved in the game without worrying about complex rules or systems, something other roll-n-write games often struggle with. At two, games can last barely twenty minutes, and at 4, we managed to have games take 30 minutes or less, meaning that multiple races were possible. If you’re looking for a new, all-ages, featherweight class game to open up your game night with, wind down after a long day, or simply play in succession to simulate your own Kentucky Derby, Long Shot is a great game and comes highly recommended.