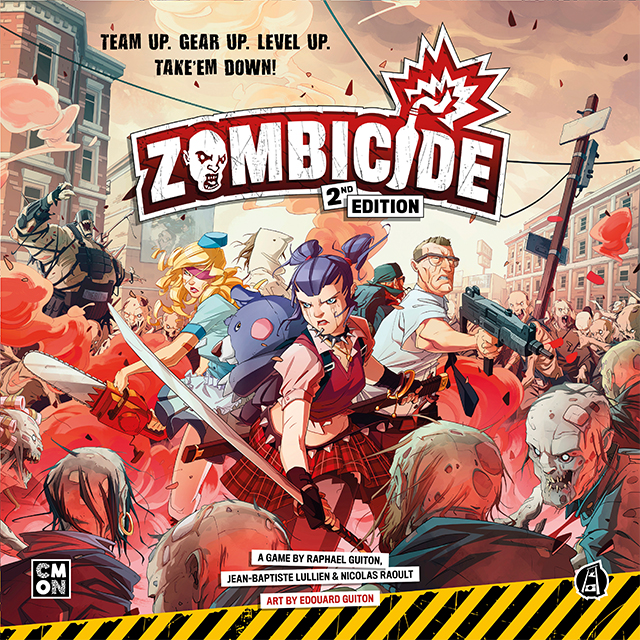 This month, I went back to Gen Con after a few years away from the Midwest in general. My family tends to move around a lot and since we have moved to the West Coast the logistics of planning, booking, boarding pets, and boarding planes has seemed insurmountable.

Then a few weeks ago, I had a buddy in need. He was running some events and needed some support: he was looking for everything from an assistant for his education events to someone to run some games. Since I have moved so far away from all the friends I’d made over the past dozen conventions, I figured that if I could swing the flight. I’d snag his hotel sofa bed and try to remember what my life was like pre-COVID, pre-Empty-Nesting, and pre-Wow-How-Did-I-Lose-Touch-With-Everybody.

My buddy and I got into a discussion about what was needed and next thing I know, I was committed to running CMON’s hit game of Zombicide: Second Edition on top of half a dozen other events…and part of my brain screamed, “Are you insane?!”

I’m a board game collector. If I want to get technical, I’m a third-generation board game enthusiast probably bordering on “hoarder of board games”. But I am not usually one to teach people games. I tend to leave the explanation to others, thinking that I’ll probably forget something important. If I end up teaching games, it’s usually something quick and easy like Red7 or Forbidden Island, because I can struggle with remembering every little rule in bigger games. Especially with all the eyes on me. Yet here I was, eyeballing what we affectionately call “2E” and wondering how to whittle these big boxes down to a compact binder, overcome my anxiety, and teach it to a bunch of strangers…because my little event sold out in a week!

Zombicide is a family favorite at my house. So much so that my partner has collected everything for the First Edition of Zombicide. As the years have gone by, we’ve added Prison Outbreak, Angry Neighbors, all the extra Survivor characters (except two promo Survivors from the very first Kickstarter, but that’s another story), Ultimate Survivors, dice towers, Zombivors, barricades, Zombie Dogz, Zombie Crowz and more. And that’s just First Edition! Second Edition—which I ran—isn’t as expansive at this point, but it can use any of the 100+ First Edition Survivors and zombie types. I had a lot to consider.

One thing I love about Zombicide games is that they work just as well with four players as they do with eight; just as long as you have enough zombies and spawn points to keep things challenging. Six is the recommended party with “2E”, but we picked an eight-character roster and made sure it was a well-rounded team. My partner painted the models up to make them easier to recognize at first glance, assigned them colored pegs for their character boards, and helped me pack everything up. I watched some play tutorials online, ran a couple practice games with my chosen scenario, took some deep breaths, and hopped on a plane.

For those of you who haven’t played Zombicide in any of its several forms, this is a co-op, over-the-top, Hollywood movie-style survival game. The missions sound like chapters in a journal and they range from 30-90 minutes if you use the ones in the rulebooks and know how to set up quickly. The vast majority of “2E” scenarios require all Survivors to stay alive and hit the exit without a zombie in your face in order to win. It’s not impossible but it isn’t usually simple, either.

I love the game because you really need to talk to all the players at the table while planning your moves. If you decide to go for the glory by running off on your own without anybody having your back, you’re likely to single-handedly boost the danger level up to something unmanageable, or even get yourself killed and end the game early. A player’s Adrenaline Points affect the danger level for the whole party; the higher the players’ AP are, the worse the zombie spawns become!

You want to know who can heal you, who has the best high-damage weapons, and who can open doors silently. Every role counts when you’re sneaking around looking for objectives, slugging it out with a Walker or Runner (1 HP) or scrambling for a weapon that can kill Fatties (2 HP) or Abominations (3HP). There are very few weapons in this game that deal 3HP of damage in one blow; I recommend throwing a Molotov cocktail from a safe distance!

In any given scenario, Survivors will be searching for and trading equipment to fight the zombies, trying to manipulate their movements and the zombie flow to get to the end of the mission. Mission goals often include collecting objective tokens or companions before reaching a designated exit space. Sometimes the challenge is controlling the number of zombies on the board. Other times it’s just a matter of which doors to open when, collecting objectives in the right order, and escaping before any Survivors take too many hits and die.

Zombies like to spawn in dark rooms when buildings are unlocked; they can pop up while survivors are searching rooms for equipment and when they spawn during their designated turn, some of them have more than one action or an ability that can make them especially dangerous. Runners can move twice or move and attack all in one turn; some Abominations have special rules that restrict survivors’ actions or the effects of certain weapons, making them extra difficult to kill.

Most of my Gen Con players were pretty new to the game, and there’s a lot to explain to a new player. It is a little information overload right at the start, but as the turns go by you tend to fall into a groove. Grab equipment and objectives, fight some zombies, run from others so the other Survivors get a shot at them. Keep everybody close to the same AP level so that the zombie phase doesn’t overwhelm the board. Move zombies towards the Survivors, spawn new zombies, reset round, pass the first player token, and begin again.

My group had good strategies and were a friendly batch of strangers. They debated options. They asked for advice. They listened to the youngest player in the group, who had more experience with the game than most of the adults at the table. Best of all, they played a balanced game and escaped the board with time to spare.

I think my first major solo-run event went well. I got past my anxiety after getting through most of the rules. There was laughter, some “oh no!” moments, some jokes, and a great finish. The players took photos of the board at exciting moments and cheered when they cleared out a dozen zombies with a nice explosion. Running Zombicide: Second Edition one of the high points of my Gen Con. Turns out that I can teach!