A Review of Magic: the Gathering’s Strixhaven Expansion, Part 1 of 4: The Mechanics

With the imminent release of the new Strixhaven set, we’re evaluating the first years as they make their way into the academy. And also the set’s cards, we guess. In this article – the first of four in our series – we’ll examine the key mechanics of Strixhaven, how they work, and talk about what they mean for game. Note that as our typical coverage is focused on Commander (and to some extent Conquest), we’ll be primarily examining the set’s mechanics and cards through that lens, though where we think something might have use in another format we’ll make a note. For more on how the set will shake out in Modern, consider checking out The Dive Down Podcast, who do some pretty great analysis of Modern.

There are four key mechanics in Strixhaven, three new mechanics – Learn, Magecraft, and Ward (which is going to be evergreen moving forward) – and one returning mechanic in modal double-faced cards.

Learn is a new keyword ability on some cards that lets you either reveal a Lesson card you own from outside the game and put it into your hand, or discard a card to draw a card. This is an ability stapled on to a number of spells and permanents in Strixhaven. In kitchen table magic, this is hilariously strong, because it means you can grab a card from anywhere in your collection. In competitive play however, “outside the game” means “in your sideboard.” In Commander… well, this means it varies according to where you’re playing and who’s in your playgroup. Most Commander play doesn’t use a sideboard or a wishboard, but those could certainly become more commonplace. Either way, because the these effects are very limited in scope – Lessons are a small set of cards – they’re much less powerful than Wishes. And in the worst-case scenario, you can rummage a card if you need to churn something.

As part of the Learn mechanic, a number of spells in Strixhaven have the Lesson type (as well as a handy icon in their upper left corner), which mark them as spells that can be grabbed this way.

All of the Lessons are Sorceries, and there are five monocolor rare Lessons, five enemy hybrid common Lessons, and five colorless Lesson spells – that is, their mana costs contain only generic mana – and the effects on them range from “trivial” to “worth consideration.” For the most part, they’re utility spells more than anything powerful.

FromTheShire: Learning is a cool mechanic, and I really like that they added the rummage ability so that even if your playgroup doesn’t use a sideboard, you still get an effect. Far too often these kinds of keywords are more akin to ‘Splice onto Arcane’ or the draft specific things from Conspiracy and don’t really do anything for you. There’s obviously a slippery slope argument to be made, but I think these may be a good place to open up the dialogue with your playgroup about sideboards. Wizards went pretty conservative with these for our purposes so there isn’t a concern about people doing anything busted with the current crop of cards, and introducing sideboards or wishboards can be a fun addition to your games of Commander. My personal playgroup fortunately allows some non-standard things like my silver border Baron Von Count deck as well as sideboarding, and it has never been a problem for us. Part of that is certainly down to attitude and a group that knows each other well enough to know that I am using those slots to activate Spawnsire of Ulamog and not for Burning Wish into some game ending combo. I can understand the Rules Committee not wanting to open the door for wishes because that could lead to some real shenanigans in pickup games, but if you have a stable playgroup, I think allowing the Lessons to function is perfectly fine.

BPhillipYork: For now I don’t see much impact of Learn mechanics in commander, though they do have the alternate option to cycle after casting, which could be used in certain contexts, such as putting fatties in to your yard in colors that don’t necessarily have amazing cycling options, but since the RC seems pretty adamant about not allowing wishboards, I can’t imagine they’ll allow Lesson boards, and a large part of the point of the card will be lost.  However if your local pod or LGS allows for such boards they could easily offer a way to effectively tutor in cards from outside the game.

The colorless lessons on the other hand are interesting in some ways since it’s typically much easier to reduce colorless costs than colored mana costs. Cards like Helm of Awakening could potentially be leveraged to “spam” out Lessons. In addition some of the lessons offer colorless ways to do things that have been previously fairly limited within the color pie. Red and blue really struggle with enchantment control, red in particular, so a way to destroy any permanent could be a valuable way to have some solution to a series stax piece.

TheChirurgeon: I like the mechanic a lot but I agree that it feels a bit too much like Splice in that this really needed a full block of cards to work with. As-is I’m not sure the as-fan in Limited will be good enough to have multiple options there. It’s a real strong kitchen table mechanic, though.

Magecraft is a new ability word for triggered abilities that trigger whenever you cast or copy an instant or sorcery spell. The ability is interesting because it’s one of the first abilities to trigger off copying spells as opposed to just casting them, meaning that it has interesting interactions with other abilities like Storm. This can create some interesting combos to play with in Commander. Right after she was spoiled, players had already figured out the game-winning combo with Professor Onyx up there and Chain of Smog.

FTS: I’m probably more stoked about the Archmage here than another two card combo. One of the most powerful and abusable things in Magic are cards that ‘cantrip’, or draw you a card, when you cast them, and this turns alllllllll of your instants and sorceries into one. In general, the ability is a little bonus for doing things you already wanted to be doing, and then sometimes the right card with the right storm count is just going to win you the game.

BPhillipYork: Magecraft is huge, there are several really strong magecraft, abilities and storm counts and have long been a mainstay of Commander, it’s also in many sense prowess 2.0, but the fact that it counts on copies is enormously powerful, there are many ways to copy a spell that copies spells instantly going infinite.  I had already built a Grixis conquest and EDH deck around this mechanic.  It’ll be big.  Like really, really big.  And flashy, and fun.

TheChirurgeon: I wish this was the new evergreen mechanic/replacement for Prowess, really. It’s just great and there’s already many nasty combos you can pull with these effects.

The newest evergreen keyword ability and potentially the design team’s long-awaited answer to the problem of giving blue creatures another keyword after deciding Prowess was too good, then maybe it was OK, no wait it was too good, Ward is a triggered ability that protects creatures. Whenever a creature with Ward  becomes the target of a spell or ability an opponent controls, that spell or ability is countered unless its controller pays the cost. So not quite Hexproof or protection, but still a major deterrent, especially early in the game.

FTS: Ward is neat, but it’s going to matter much more in the kind of cEDH games that Phillip plays than my typical table. Most of the time we are going to be able to pay for it without it being more than an annoyance, or the creature is going to be dying to a boardwipe rather than targeted removal. That being said, when it comes in clutch it’s going to be extremely satisfying.

BPhillipYork: Ward is a nice compromise, shroud was a bit of miscalculation, hexproof was a bit too strong, protection has it’s own issues, making a creature unblockable and immune to damage creates some issues, especially for red.  Ward is a really nicely thought out mechanic in my opinion, because while it’s going to default to Ward X, pay x colorless mana, ward can also be scaled up and down.  Ward 10 is insurmountable, but you could Ward X, where x is the number of basic lands you control, and there are already wards that require discarding or paying life.  It’s also worth nothing that the ward counters the spell, which has some mechanical implications (and it’s a triggered ability) so you could in theory counter the trigger, and if your spell can’t be countered, then you can just ignore the ward ability.  Personally I think this is a really good mechanic, fairly well balanced since it’s scalable, and could even be more made more complex, for example, you could have a ward X, where the controller pays X and that determines the ward, or ward with counters, or a creature that gives ward counters.  There’s really a lot of design space for this new keyword. 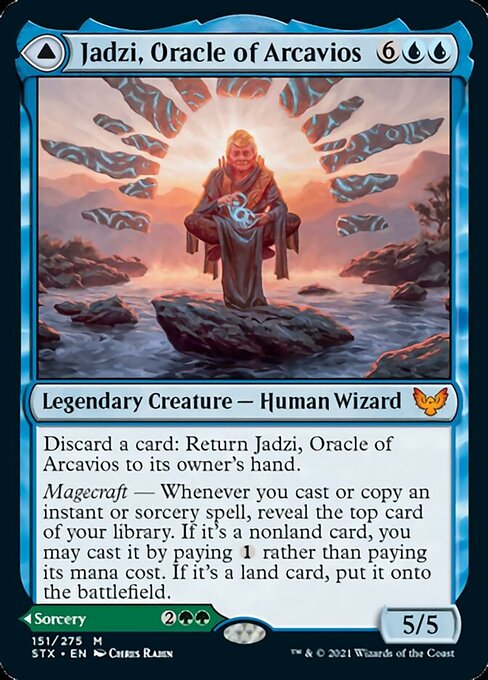 Similar to Zendikar Rising and Kaldheim, Modal Double-faced cards (MDFCs) return here, this time with sorceries on one side instead of lands or artifacts, though there’s a cycle of five creature-creature deans and, similar to Kaldheim there is a modal double-faced Planeswalker, this time with two planeswalkers to choose from. Unlike the transforming DFCs of past, modal DFCs can be cast as either side. 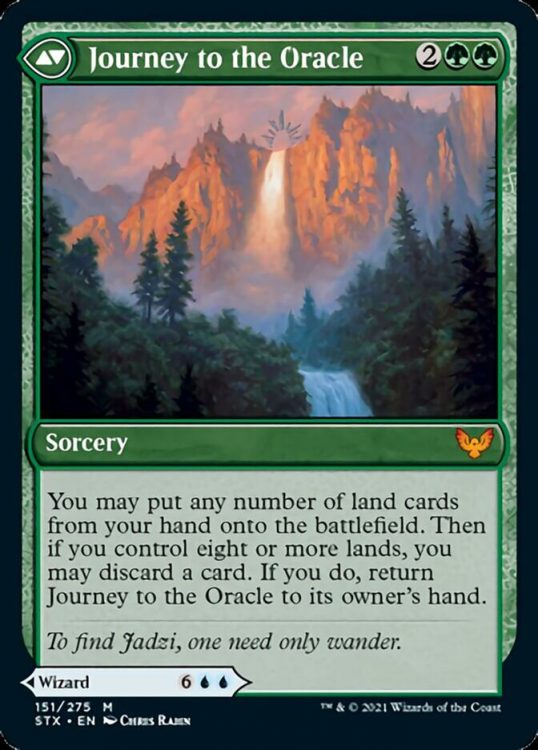 FTS: Having the MDFC’s return is great, and there are some fantastic ones in the set. With the huge variety of game states and threats you may find in Commander, one of the most powerful things a card can be is versatile and MDFC’s fit that bill perfectly.

BPhillipYork: MDFC’s are great, great mechanic, more please. Way more. One of the worst parts of magic is when you just draw no land or tons of land.  And while these MDFC’s don’t involve land, there is a similar issue with getting only creatures or only spells.  I also really like the way that the legendary ones interact with color identities for commander and conquest.

That wraps up our look at the set’s mechanics. Join us next time as we do a deeper dive into the set’s cards, looking at the monocolored (WURBG) cards in the set, picking out our favorites, and talking about the future build-arounds. In the meantime, if you have any questions or feedback, drop us a note in the comments below or email us at contact@goonhammer.com.