A Song of Ice and Fire: How To Handle Invincibility 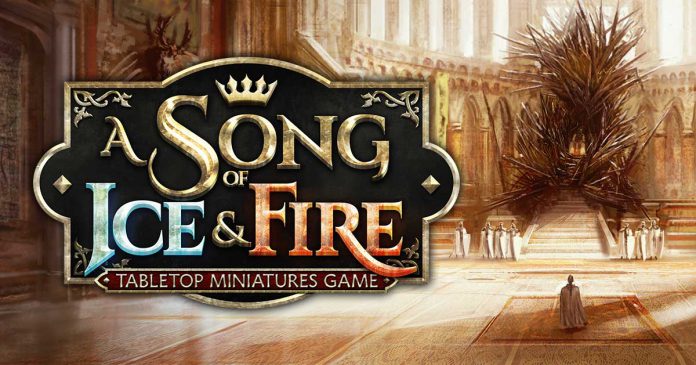 SOIAF is a really good game. There’s enough happening on the tactical layer with cards, NCUs, and various tricks that it makes a game about putting rectangles into different rectangles incredibly spicy. Every so often I hit some incredible combo, either used by or against me, that I need to take a quiet note of because it changes the conceptual landscape of the game decisively. One I’ve grown increasingly aware of is the idea of the invincible unit.

There are certain combinations that pass all the way into ‘figuratively unkillable’ – durability enhancing attachments on already durable units that create absolute bullet sponges. You won’t really understand how pointless engaging one of these units is until you have the fight, but what I can do here is indicate that ‘don’t even bother’ is a real answer.

The existence of these units is not a balance problem. By and large they all wind up on the ‘impractical to kill’ side of things and not ‘too much damage’ side of things. This means that you can oftentimes simply avoid them – they’re usually 9 points minimum, so the rest of the army will really suffer to pay the cost of them.

Every faction has something like this and I’ll go through the greatest hits with you now.

How It Works: You take a swing at Selmy and land 6 hits. With 4+ saves he blocks 3 of them, and then spends a Faith Token to activate Hardened to block another, taking two wounds. He then makes a panic check on 3+, which he passes, and because he has Joffrey on the tactics board he immediately heals two wounds and gets a faith token. Total damage: 0.

Oh sure, maybe you get a cool flank charge with lance cav and push that math around a bit. Instead you deal 6 wounds to him, which he heals two of. And then the next time you make the swing he’s auto blocking 2 hits instead. Meanwhile, one of your units fails a panic check and then the Lannister player plays Fealty to the Crown and gives Selmy four wounds back and then you’re right back where you started.

How you crack it: You don’t want to have to do this, but if you have to do this, the only way is to make him fail a panic check. Hard, because he’s 3+ morale, but if you put down a corpse pile where he’s expected to be (usually the center) and then engage him with something tough and vicious you’ve got a chance. Not a good chance, though. I’ve seen Selmy’s Sons engage 5 Free Folk units simultaneously and not die, but if he fails two panic checks in a row then he might run dry of faith tokens and have lost the chance to heal 4 wounds.

You can also not attack him. His faith tokens fuel both his attack and defense, and if you’re not giving him a chance to make panic checks then he’ll burn through his offensive gas really quickly and wind up barely hitting harder than Stormcrows. 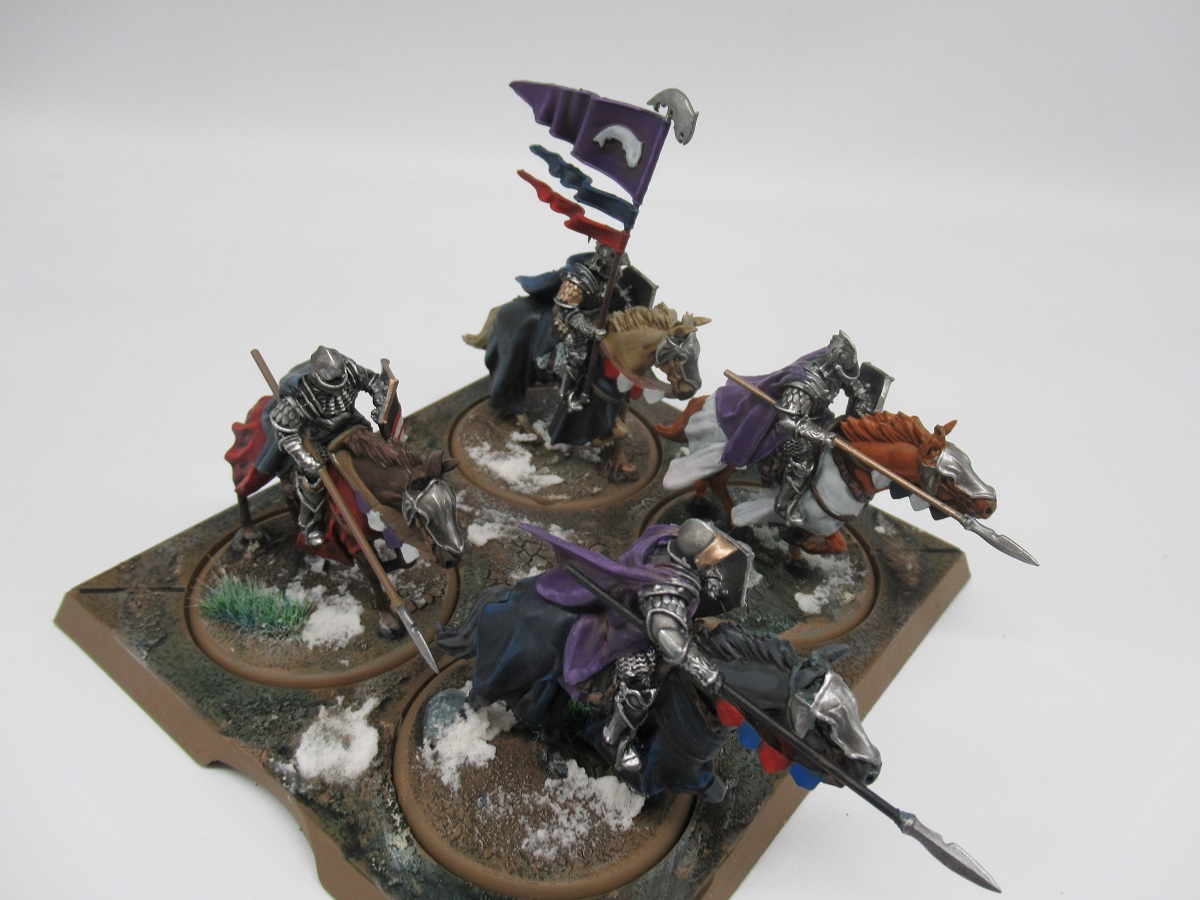 How it Works: Lance Cavalry don’t look nearly as scary once they’ve made the impact. They’ve lost 4 dice now that they’re no longer charging so your elite infantry can just go ahead and win the ensuing brawl, right? Wrong! The Winterfel Guardian gives both Dauntless and Stubborn Tenacity which means each time they pass a 5+ panic check with re-rolls from Eddard – which will be always – they heal a wound and deal a wound. Also the Stark player will have bowmen shooting into close combat doubling the rate that this happens. They’re Rose Knights on horses!

How you crack it: If you have to do it, sustained pressure and concentrated force. Eddard only has four tokens and you can slog through them if you keep it up. It also helps if you can get into those archers because that halves the harm/heal array. With 18 points spent on cav and a 6 point NCU there will be some pretty big gaps in the enemy line to engage the few units that remain. 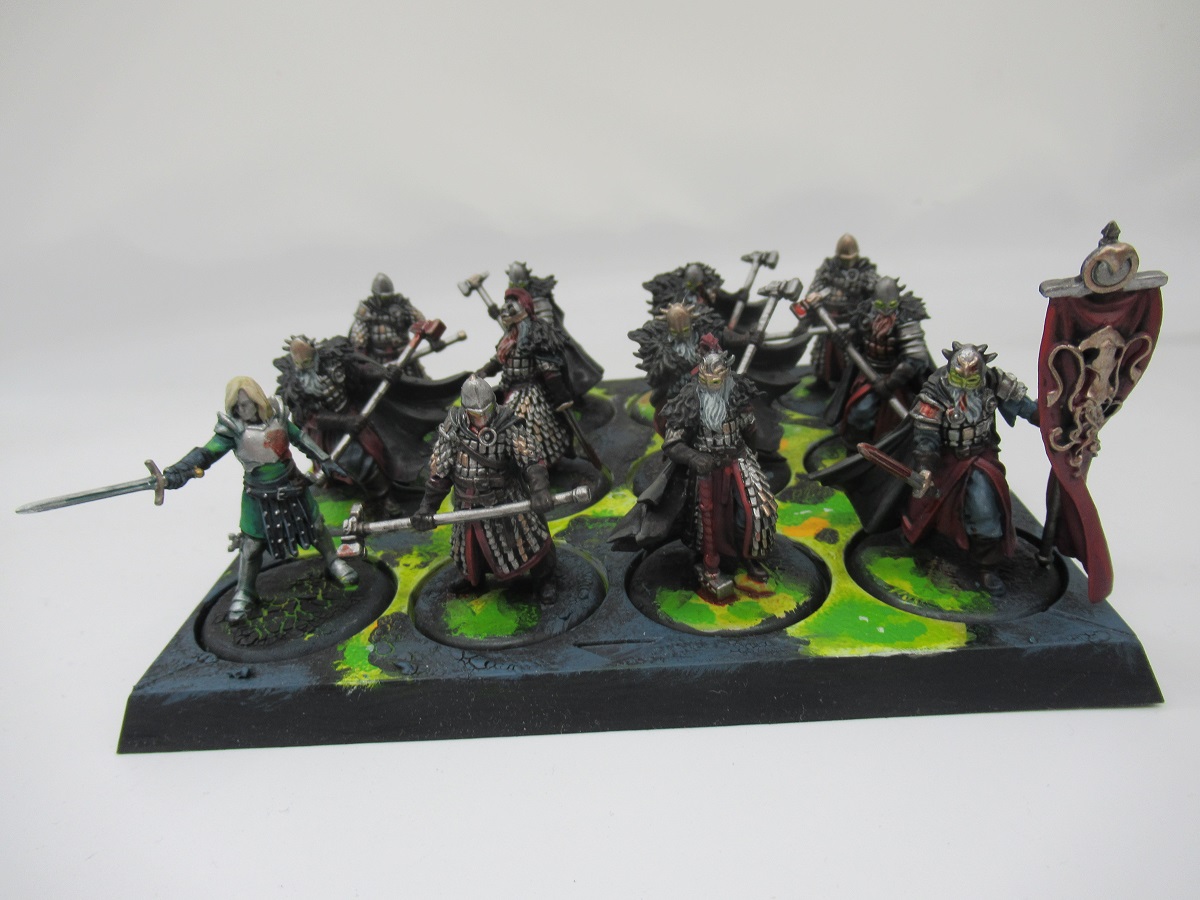 How it Works: Beron Blacktyde is one of the best NCUs in the game. He gives a unit resilience until it fails a panic check – and oh hey, as part of this theme, we’ve got another 3+ morale unit that heals wounds when it passes panic checks, but this one also takes half the number of wounds, rounded down when Beron’s influence is up. Those 6 hits turn into 3 failed saves which turns into one wound which is then healed when the Blacktyde pass their 3+ panic check.

And this one’s even worse than Selmy because Qarl has Expert Duelist. This means he wins most of these Invincible Unit mirror matchups because he just kills the attachment with all the synergies and wins the subsequent slugfest. And that’s not even getting into how good Greyjoy healing is.

How you crack it: You don’t. You really don’t. More than any of the others in this list you just let them have that objective. They want it more than you do and have invested a 9 point unit and 5 point NCU into making it happen. One move to consider is moving a unit onto the objective first, and then whenever your turn comes, rather than take a pointless zero damage swing just retreat one inch. You’re not even making yourself unusually vulnerable because the Blacktyde get rerolls normally and if you do this it can take two or three turns before you stop scoring.

Upside is that Beron can’t be everywhere at once, and you can get an unopposed hit off if you’re the first player and claim the swords before they can. The other possibility is to engage them with cavalry, which Qarl at least can’t Expert Duelist.

How it Works: This is the same idea as House Stark’s Winterfel Cavaliers – pass a morale check, heal a wound, deal a wound, crush in the long fight. Charismatic Renley is usually on hand for the +1 morale, else it’ll be Loras Tyrell, and Baratheon players will often run two of these backed by a bunch of healing that stacks on the chip damage. They’ll do pretty well against a lot of other extremely durable units because of the autowounds as well.

How you crack it: This one’s a little more manageable than the others. The morale is good but not great, the 3+ save can be circumvented by things that deal autowounds (giants, dragons), and it’s vulnerable to getting pinned, flanked and overwhelmed. They’ve also got no mobility at all so if you have to fight an invincible brick then this one gives you a few more options than normal. That said, there’s essentially no chance of winning a sustained brawl with these – their attack is nothing special but they’re experts at grinding their opponents down over time. Burst them down if at all possible. 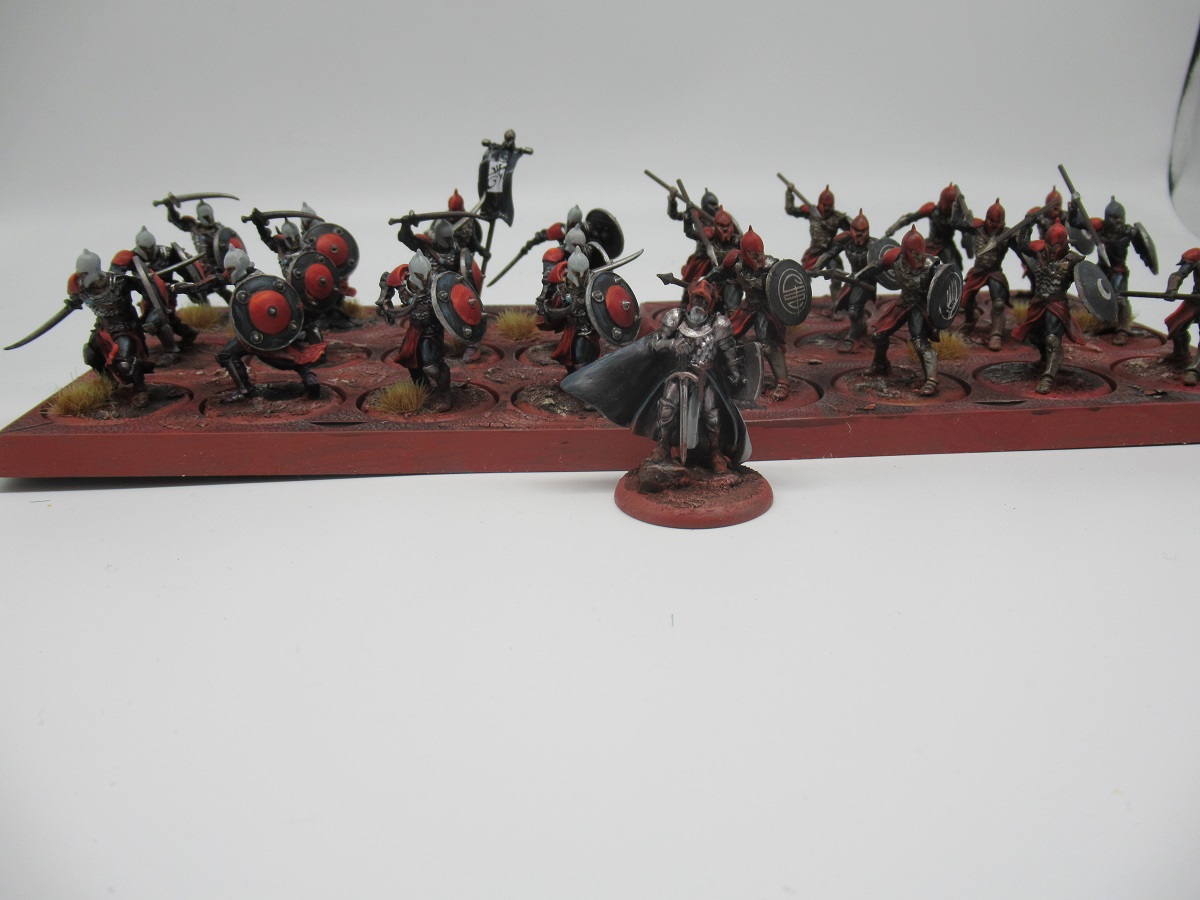 How it Works: “I, an intellectual, will simply avoid such an obviously indestructible unit,” you think right up until Belwas taunts you. Then you charge him, and he plays like five different cards that are some variation of ‘fuck you for charging me’.

How you crack it: Belwas is very much the Targayen version of invincible: his invincibility doesn’t have nearly the same sustain as other factions’ versions, but he’ll do a lot more damage to you at the beginning of the fight in exchange. He’s really looking to capitalize on this by finishing a unit that charged him with a follow-up countercharge with cavalry, blowing a massive hole in your line. But the cavalry won’t be anywhere near as durable as Belwas himself letting you switch targets very effectively after that initial horrifying charge has resolved. Also watch out for the Belwas player placing stakes that he wants to taunt you over.

Shieldwall is also an order, and Unsullied Pikes are resultingly very vulnerable to getting ganged up on. If you’ve got two units engaging them at once you’ll start to get through those defences – and you’ll probably have to commit those resources because of the Taunt aura.

Night’s Watch: Donal Noyle in Veterans of the Watch

How it Works: Shieldwall, Disrupt and Counterstrike, usually with Coldhands standing behind them adding another -1 to the attack. You send a unit of infantry with 4+ to hit into them and you’ll be hitting on 6’s and taking wounds for every miss while he blocks 3 automatically. Stormcrows going into these guys might as well not even be there; they are but meaty fog that the Veterans will walk through unperturbed.

How you crack it: Fast. If you want to kill these do it fast. If you, say, put Khal Drogo into the flank and kill Donal you might think you’re doing well but you need to put the boot in and finish the job because of how the Night’s Watch tactics deck works. If you get into a sustained slugfest with a single unit that unit will collect tactics cards until they’ve got seven cards hanging off them and your damage slows to a trickle. Amon can also heal 6 wounds at a time if he claims the bags on a 1-rank Nights Watch unit, so the difference between ‘almost dead’ and ‘entirely dead’ is especially important for fighting Night’s Watch.

How it works: You comprise your army entirely of Raiders and then you get two more units of raiders from the Endless Horde. You grab all the objectives and then rack up points while nothing of yours gives up VPs on death. Maybe add a chariot and a unit of Thenn for your commander to be in, but mostly it’s Raiders. Some of the Raiders might have Walrus Chieftains – and resilience is kind of disgusting on raiders – and your commander is probably Manse, making them all weirdly resistant to morale damage

How you crack it: Resist the urge to spread yourself too thin and contest every objective. These are ‘just’ raiders, but they’re raiders backed by the Free Folk tactics deck and you’ll be fighting them two to one. What’s worse than getting timed out by objective scoring is getting timed out by objective scoring while the FF player picks off extended units with flank chariot charges. It’s also worth remembering that the FF tactics deck has some sledgehammers in it, but it runs out of gas eventually. You will almost certainly feel overwhelmed on turns 1 and 2, feel like you’re losing and that it’s impossible, but then the tidal wave starts going out and you look around and realize they’ve got nothing left. Keep a defensive formation and focus on recovering from big tactics card combos rather than feeling you need to race to the bottom.