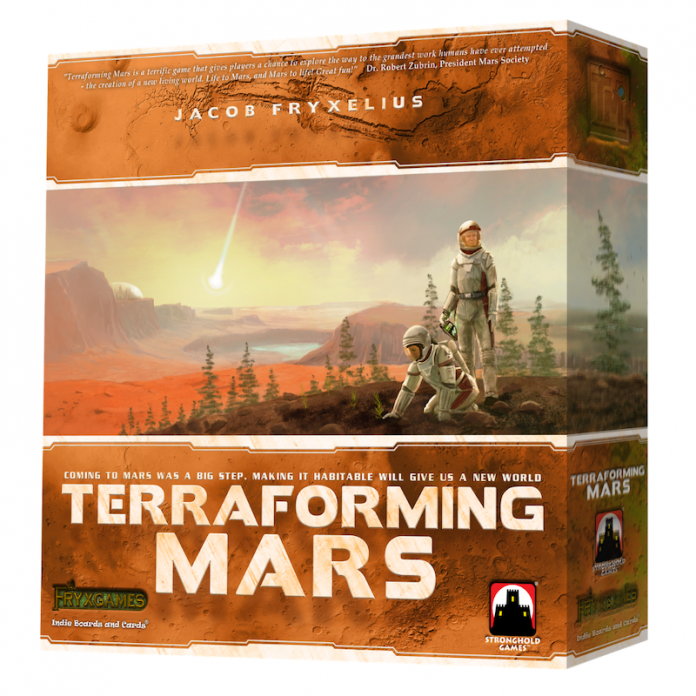 Terraforming Mars, a critically acclaimed board game released in 2016 by FryxGames, takes players into the seats of futuristic corporations whose minds are focused on just two things: making money and terraforming the red planet. Not necessarily in that order either.

By accumulating resources such as money, steel, titanium, and energy, players are able to fund projects to change Mars. Players can create forests to increase the oxygen, build cities to house new citizens, create new industries, and even blow up asteroids! There are as many ways to win as there are corporations to play. While it is all about getting victory points (called terraform rating (TR)) how you got about doing that is up to you.

With such a variety in terms of gameplay the award-winning game has unsurprisingly had more than a few expansions since its release. First, players were given the chance to also colonize Venus in Venus: Next. Then, the other sides of the red planet became available to colonize in Hellas & Elysium. And players were also given new options at game start in Prelude and more room to grow in Colonies. There were also many more smaller releases in between these! The game has truly grown well beyond its initial release.

And following that growth, we once again have a new way to terraform the red planet! The newly released Terraforming Mars: Ares Expedition is not a new expansion to the popular game, but a brand new way to experience it. Similar to games such as Race for the Galaxy and Aeon’s End, Ares Expedition turns the usual corporate terraforming experience on its head. For those familiar with Terraforming Mars, the adjustment will not be too severe, but it is new enough to feel like playing the game for the first time all over again!

At surface level, the two games look very similar. They have the same corporations, art, projects, and resource types, but in the gameplay the two could not be more different.

Within the game, you still play a corporation funding projects, gathering resources, and aiming to terraform mars. But how you go about these things has changed completely. Instead of taking turns funding one or two projects, players take turns simultaneously. And you no longer fund whatever you can afford, and regain resources generation to generation. Instead, players must decide what actions will be possible to do each generation.

As each player chooses these actions secretly, and you are limited in what you can choose, there is a chance that you may not get to do something you hoped for this generation. Even if you have the resources.

For example, perhaps every player chose the Construction action. This means that while every player can play a blue or red card, no one will be able to develop a green card, draw new cards, or produce any resources this generation. Including money.

Perhaps every player chooses to Produce, which means everyone gets resources, but no progress on terraforming mars can take place this generation.

But this also means that if every player chooses a different action from each other, everyone is allowed the opportunity to do much more in a turn than they expected, allowing their corporation to reach new heights!

In order to truly explore the differences between Terraforming Mars and the new Ares Expedition, let’s explore a corporation’s journey through both games. Let’s choose Ecoline as our corporation, as it is playable in both games.

Ecoline’s strategy is all about accumulating plants, building forests, and increasing the oxygen. This is true in both games. However, the tactics you use to go about these are slightly different.

In Terraforming Mars, it is common for Ecoline to increase their plant production, accumulating plants every generation to build forests. They would then find ways to build cities within their newly forested areas for even more points!

But in Ares Expedition, a corporation is not guaranteed to be able to produce resources every turn. They have to take the Production action. Which means, in order to play a resource focused corporation like Ecoline, in Ares Expedition, you would need to regularly take the Production action. And since you have to take this action to get your plants, it makes sense to produce as much as you can to get the maximum amount of benefits from that action!

So while Ecoline in Terraforming Mars could focus on plants, forests, and cities almost exclusively with fairly consistent success, in Ares Expedition they feel the need to diversify much more strongly.

Even when playing the same corporation with almost the same goals, the gaming experience can be quite different for players!

The game may look nearly identical on the surface, but Ares Expedition has the potential to be both a faster gaming experience and far more strategy heavy. It is also worth noting that as this game is so much more card heavy, you can play it on smaller surfaces and the clean-up is far quicker!

It’s not often that game redesigns of this magnitude can find that balance so well, and it makes this game that much more of a unique experience!

Those who enjoy Terraforming Mars will enjoy Ares Expedition as a way to revisit a beloved game in a new way. Those who enjoy Race for the Galaxy will enjoy being able to play a similar game with new mechanics and strategies. And those who simply enjoy in-depth, detailed games that can be played relatively quickly will absolutely love Terraforming Mars: Ares Expedition!