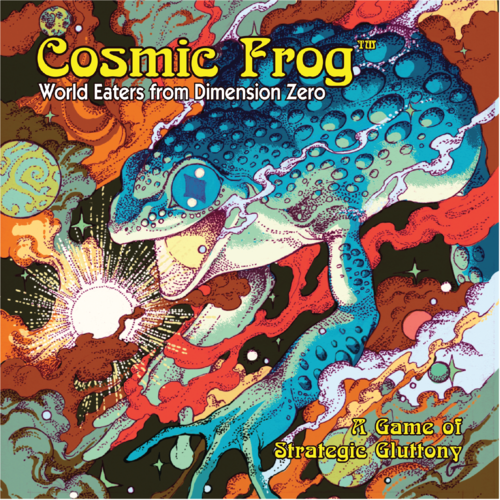 Imagine a frog. This frog is unlike any frog you’ve ever seen. For starters, it’s two-miles tall. It towers over the land. It is dwarfed by the vast emptiness of the cosmos. In these cosmos waits another frog, biding its time. The first frog, heavy and fat, leaps into the air where it is rapidly, violently assaulted by the space-frog. The victim…fades. Blasted into another dimension it disappears as it vomits a torrent of raw elemental terrains. Smiling, the space-frog consumes this land in turn and retreats to its own small island in the stars.

Cosmic Frog, by Jim Felli, is a weird game. Its premise of two-mile tall frog beings reconstructing a shattered realm by consuming primordial earth and vomiting it back up into a pocket-dimension is weird. Its blend of gaming mechanisms is weird. In fact, the only thing that isn’t weird—the only thing that makes sense—is that it’s a Jim Felli design.

Felli, and his publishing company Devious Weasel, are a bit of an anomaly in today’s market. He does his design, testing, and publishing on his own and goes straight to retail without relying on Kickstarter. Despite the success of Cosmic Frog his games still have a feel of the independent underground. You don’t know what you’ll get, you don’t know what it will feel like, it will certainly be unfamiliar, but you know it’ll be good.

Whereas many of the titles hitting the market these days feel like a mad-lib of mechanisms, Jim’s never do. Bemused is a social game you don’t play to win you just play to avoid loss (and it breaks my brain). Zimby Mojo is a hectic game of tenuous alliances and racing cannibals through a labyrinth. Shadows of Malice is the closest you’ll get to ever evoking the themes and feel of Elden Ring‘s explorative discovering on the table.  Sure, Cosmic Frog has industry staple mechanisms like “Asymmetric Player Powers”, “Hex Based Movement”, and light “Set Collection”, but describing it that way is useless.

So let’s get to the hard part of reviewing this game.

The dominating element of Cosmic Frog is known as the Shard. It’s a serpentine arrangement of stacked terrain hexes that makes up the “board” of the game. Setting this up is a little clunky, as each of the 84 empty hexes will have up to three pieces of terrain stacked in it at the start of the game. This is your Shard, your swirling mass of primordial land that represents only the promise of a new world, and it almost certainly will never, ever, be repeated or matched by anyone else who ever plays Cosmic Frog.

On to this shard you will descend with your Rayna (the giant two-mile tall frog) to consume land and store it in your Gullet. Your Gullet can hold 4 pieces of land, but care must be taken before gorging yourself. Every piece of land you ram down your froggy throat will slow you down and make you a more tempting target to aggressive frogs.

If you can fill your Gullet and jump back into the Aether surrounding the Shard you’ll have the chance to regurgitate terrain into your Vault. Only lands in your Vault will score points at the end of the game but there’s a catch. The geometric configuration of your stacked land matters greatly. The Great Gods want a variety of land types, but also want connected strings of similar land. Stacks can be created to generate mid-game resources, but can get in the way of scoring lines. Complicating matters is the fact that land enters your vault in the opposite order it was consumed (Last In, First Out).

This makes the general business of eating land and barfing it back out an experience that feels like constructing and managing your own Tetris blocks. Instead of time and speed breathing down your neck, it’ll be your opponents.

Early in the game land is plentiful. Typically I find players engage in a sort of cautious peace as they zero in on certain land types and gobble them up relatively unopposed. As the game goes on this changes. Meteors strike the shard destroying land and shrinking the board. Suddenly more aggressive player powers are valued—oh yeah the radioactive energies of the cosmos mean your player powers are horribly unstable. As resources decline, hostilities increase and suddenly this game goes from Tetris to Smash Brothers.

These frogs can fight, and with the right powers they can fight hard. If you’re in the same area as an opponent you can expend Oomph, your life resource, to engage in titanic combat. The goal is to punch your opponent off the Shard if necessary and then square into an alternate dimension. Doing so causes them to vomit up any land in their stomach and into yours if you’d like, and opens their Vault to raids.

Yeah. Your neatly maintained garden of lands all set up to score beautifully at the end? It’s vulnerable.

Players whose frog is punted into the Outer Dimensions get to watch passively as their vault is raided by others desperate for one more lake or that last bit of swamp that survived the meteors crashing into the shard. This can be tough to swallow, as “skip a turn” mechanisms have mostly been left behind decades ago. That little bit of Felli magic makes it work however; as your turns are skipped you store energy until you finally reemerge. The longer you’re stuck outside the playscape the more powerful your explosive return becomes.

A game of Cosmic Frog is a game of controlled cyclical chaos. Just as you’re comfortable with your abilities a radioactive wind mutates you and your opponents and your strengths have changed. The ground is stable until a frog eats a tile from underneath you or a meteor fragment nukes a hole straight through it. You fight, you run, you jump. You’re peaceful, you’re aggressive, you’re a political agent, you’re fighting for your world.

Weird isn’t always good, but when it comes to Jim Felli good is always weird. Like a master chef deconstructing familiar foods and reconstructing them into a familiar yet alien award winning dish, Felli designs are worth seeking out. Cosmic Frog may be his most mainstream design yet but loses none of the magic in doing so. It’s one of my favorite games of the last few years.