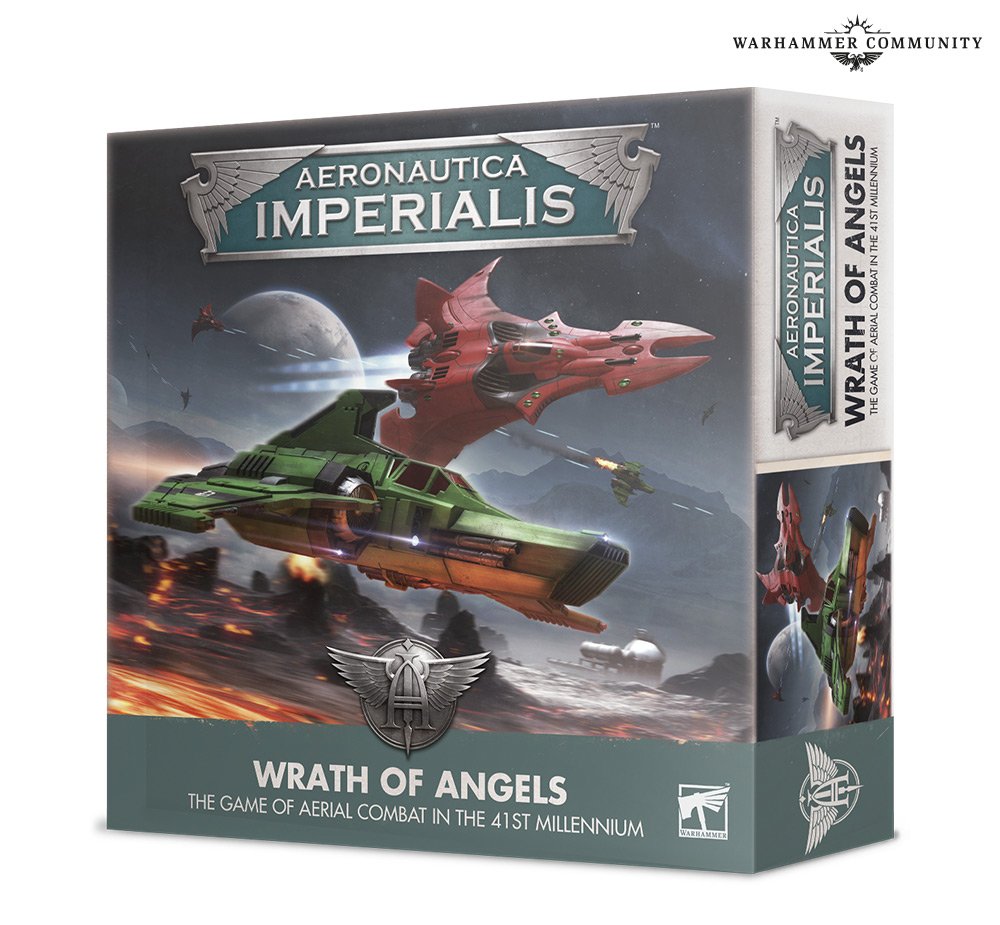 So we’re back in the game.

After 4 months of total radio silence on Aeronautica (very likely because disruption to the release schedule caused by lockdowns, Brexit, and factory issues meant that they ran out of Warhammer Community articles to put up without spoiling things that wouldn’t be out for months), Games Workshop revealed Wrath of Angels, with two new factions: Space Marines and Aeldari.

As with previous waves, there is a new starter set with an abridged rulebook, a 2 1/2 foot square map, counters and two forces, giving you enough for small- to mid-sized games. Aeronautica continues to be the cheapest GW game to get into; the starter really does give you everything you need to play and forces big enough for 100 point games at least.

The Aircraft included in the box are based on the Forge World planes again, with Xiphons and Storm Eagles for marines and Eldar Nightwings and Phoenix bombers for the Eldar, not Stormhawks, Stormravens and Crimson Hunters. There are good reasons for this; for the Space Marines being the obvious reason that the 40k planes don’t look great and have somewhat eccentric armament (multi-meltas on a plane is certainly a choice). The Eldar choices here are the same as those in the first edition of the game and the planes in that 1st edition were themselves updates of Epic models. 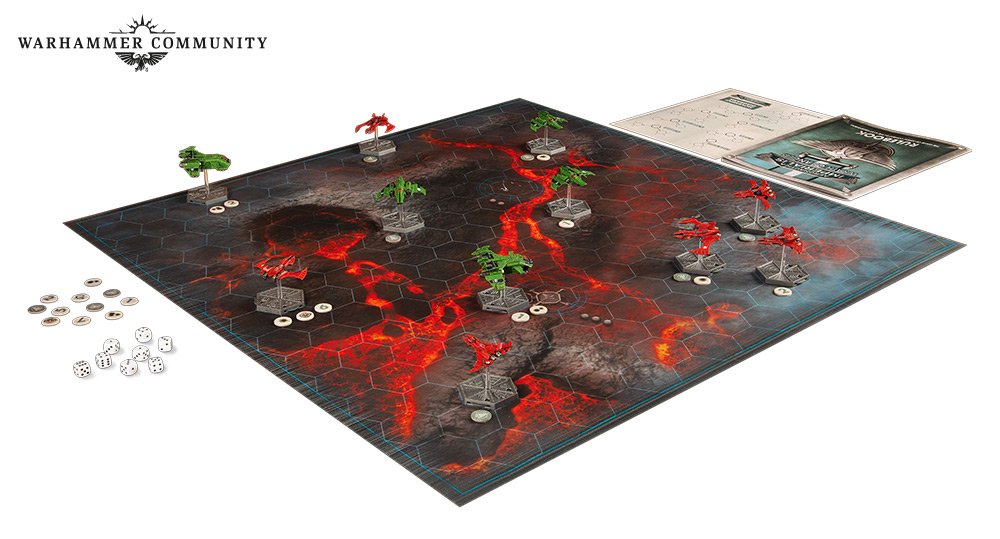 The Thunderhawk (it and the Thunderhawk transporter were the only Space Marine aircraft in 1st edition), is back and in plastic, and about the size (and likely the points cost) of a Mega Bommer. This means it will likely be about 4-5″ long.

So what does this mean for the game?

Each AI wave to date has been accompanied by a campaign book with additional scenarios and additional rules. There’ll also a new double-sided 3’x3′ map (getting at least one of these is recommended).

This means that there’ll be a big book with Marines and Eldar in it, likely featuring the Eldar Vampire Bomber and Space Marine Thunderhawk rules, and hopefully featuring the Marine Fire Raptor, Thunderhawk transporter, Ceastus Assault Ram and Stormbird (but realistically maybe one or two of them). Hopefully the Eldar have something else in there, but it’s Eldar, and they’re likely to have bombers as fast and maneuverable as Thunderbolts, so they can more than manage if they only get three aircraft as long as one of them is a bomber and one a transport.

This book will also feature more scenarios, and while the Taros Air War book was a massive improvement in terms of scenarios from the Rynn’s World book, more good scenarios – especially balanced matched play scenarios – are something the game needs.

Adding two more factions to the game brings the total number of factions to five, and gives a chance for a proper meta to develop as opposed to the current situation of Imperials relentlessly crushing Orks and mostly crushing Tau. Andy Hoare was forthright in saying that very often a quick way of ruining a game was adding Eldar to it, like for example Battlefleet Gothic, 40k, and other GW games. And while he’s right, we hope that adding them here will serve more as a balance rather than warping things in a new direction.

What does the prior edition tell us?

In 1st edition Aeronautica, holofields were a 5+ save against damage, which was taken at the end of the resolution of the shot for maximum feel bad points. Oh, you finally shot down my elf fighter? Well, let’s roll a dice to find out that in fact you didn’t. Andy has said that the new holofields’ effects are different at different ranges, with maximum effect at long range. If Eldar are generally maneuver 1-8 or 9, have a 4+ save at long range, and have weapons with reliable damage output at long range, then there’s going to be a great deal of grumbling about Eldar in store for us. If their weapons are short or medium range then Imperial players will grumble and Ork players will shout ‘Meat’s back on the menu boys!’ because they’ll have a faction that they’re an actual hard counter to.

I’ll be collecting an Eldar force myself, as I have with every other AI faction, and it’ll be interesting to see how they’ve been done and whether the game designer’s curse of the Eldar has been avoided.

With Space Marines coming to the game, this raises the interesting prospect of playing games and campaigns set during the Horus Heresy, as between Space Marines, Imperial Navy aircraft, and the Astra Militarum there’s enough variety to make scenario and campaign play interesting. I may file that idea away for later.

Rob: This also functionally means that you can run a Chaos force, in 30k or 40k. Sure, we don’t have Heldrakes or Hellblades/Helltalons, but there’s nothing stopping you from slapping a legion paint scheme and some conversion bits on these bad boys and making a traitor air force. But also, please make the Chaos flyers GW.

The miniatures look great, but there’s been some rescaling of the Xiphon (at 1/300 scale it’s tiny, but I think the original 40k scale mini had a touch of “people not knowing how big planes are” syndrome) which helps it look great.

The Storm Eagle similarly looks great, and I would love it if there was a Fire Raptor variant sprue like with the Marauder and Marauder Destroyer, Tiger Sharks, Eavy and Grot Bommers, etc.

The colour schemes are striking. The Salamanders scheme broken up with black looks great, and I can see people diving into the Horus Heresy black books for inspiration for their own chapter and legion schemes. I’m thinking of Blood Angels, and Ultramarines, both of which would look good, but so would Night Lords, Sons of Horus, Iron Warriors and World Eaters. Rob: Hell yeah.

On the Eldar side it’s all good news, and minis look exactly like downscaled versions of the FW models, and the design on those was solid (and great updates of the Space Marine 2nd edition models into 40k scale that have now been de-biggened back into Epic scale).

I’m nowhere near as excited about these as I am about Space Marines, for obvious reasons, as marines will drag a big chunk of new players into the game. However I know that there are people out there who play Eldar in every system they are in, and will get into Aeronautica the same as they would get into Titanicus if they got so much as a whiff of Phantom Titan.

I’m also seeing a pick up of activity with more people starting the game with existing factions. With another expansion on the way people on the fence about the game are buying in, as we saw with Necromunda. With Necromunda there was lots of complaining that everything wasn’t released at once, and then within a bit over a year there were plastics for each core gang. Continued support also promises that we will see Wave Four, giving us Chaos and hopefully one other faction (Necrons? Dark Eldar?) and expand the options we have further, and grow the player base more.

So exciting things are happening with Aeronautica, it’s time to bust out the paint brushes and if we’re lucky we might get in person events back by Christmas.

Have any questions or feedback? Have something you want us to cover or write about Aeronautica? Drop us a note in the comments below or email us at contact@goonhammer.com.