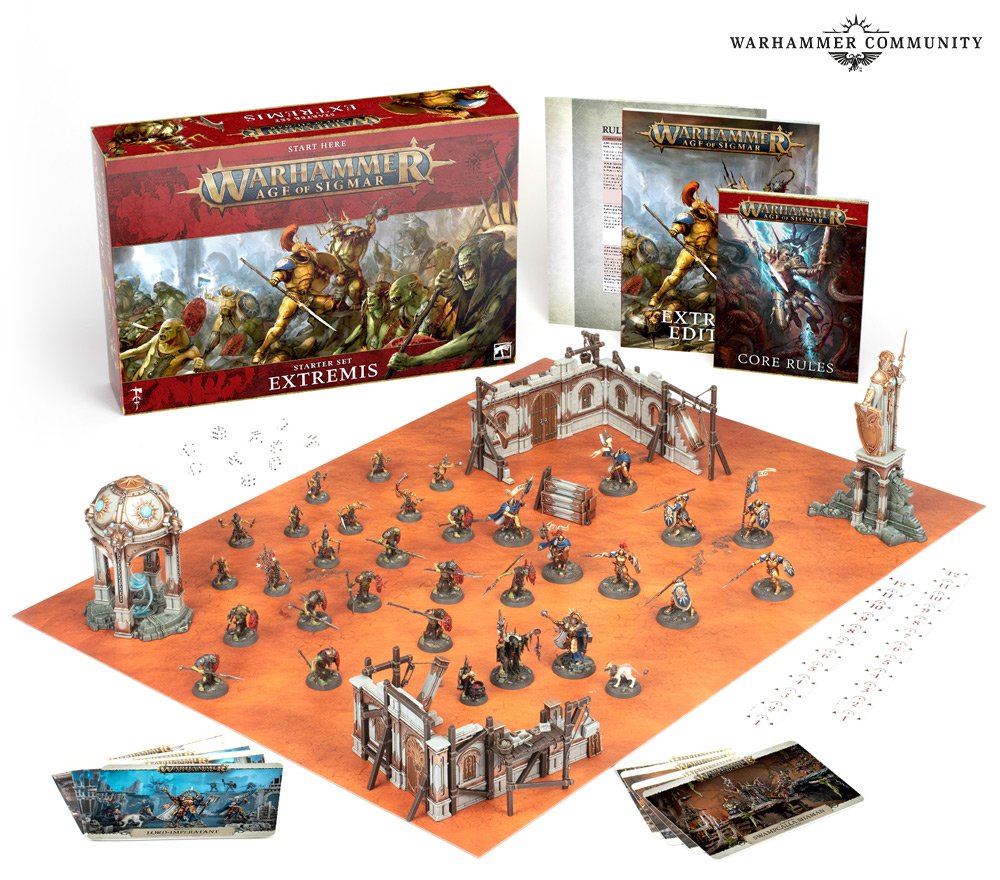 Goonhammer was given a free copy of the Extremis Edition Starter Set by Games Workshop for review purposes.

Starter Sets have been a staple of Warhammer since time immemorial. Many warhammer players memories go back to picking up a starter set that got them into the game, whether it be Assault on Black Reach in 5th ed 40k, Orks vs Empire in 6th edition Fantasy Battle or even as recent as Soul Wars for Age of Sigmar. The Starter sets are often a great way to get a whole bunch of models at one time for much cheaper than if bought separately, let players start with a (nominally) balanced army against a friend and usually contains a much more streamlined, beginner-friendly version of the rule book which eases the transition into what can be a bit of an overwhelming hobby.

Soul Wars attempted to make the transition even easier by offering three tiers of Starter sets, each with different price entry points and number of models. This model has continued into 3.0 and as of today these models will be up for preorder. Which ones are worth your hard earned cash? We’ll compare each of the three tiers and help guide you on which is right for you.

All of the editions come with the following accessories as well:

Now onto what makes them unique. 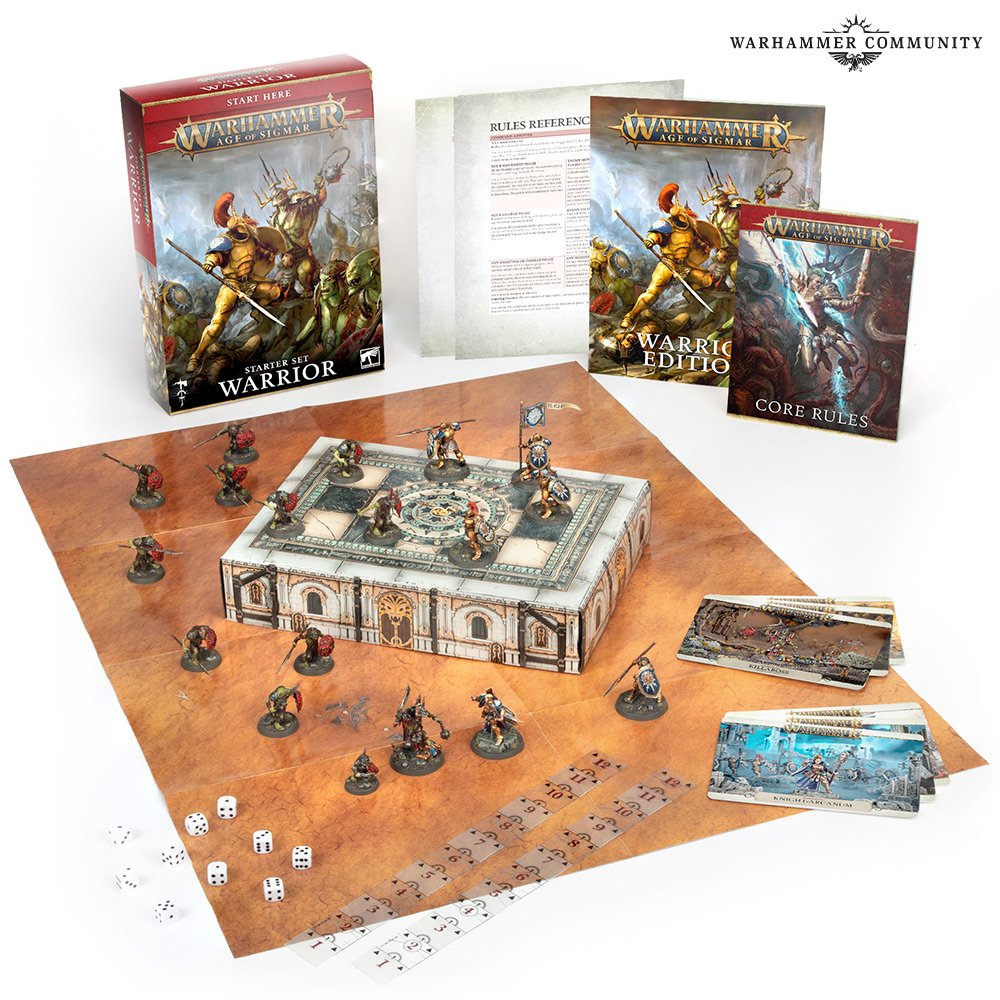 What minis does it contain?

The “budget” set, this is an odd one to recommend on it’s surface. While you can in theory play like this, I don’t think it’s going to give you any sort of grasp of what the game is like to actually play. Looking at the points, these seems fairly balanced. The point difference isn’t that much, and while the Kruleboyz get more guys they are naturally much more delicate. The problem is that with one hero and one minimum sized battleline you’re just going to charge them at each other and hope for the best. Both armies have access to Mortal Wounds on 6s to hit (Kruleboyz having it as an army ability while Vindicitors have it as a unit ability). With 2 attacks per Vindictor both sides are pretty even in number of attacks and are just hoping they strike first and get more 6s. It’s more luck based than a real game of Age of Sigmar will be and is only good for teaching the general order of combat but not the larger game. Additionally, only one side having a Wizard feels unfair as one player gets to cast spells and the other can’t do a thing about it. Particularly when this spell is a pretty nasty Mortal Wound spell. This is about to become a running theme but we’ll come back to that in the Harbinger edition.

The contents also fail to give an idea of what playing on a field will be like. The box does include a fold out mat which does save new players needing to learn to measure out a space and can just place it on a table. The terrain situation is dire however, all you’re doing is flipping the box over which has a printed pattern that looks like a raised platform of some sort. It doesn’t really do a whole lot for you.

While it’s a pretty poor way to enter the game it does serve a few purposes. The Heroes in this one are different from the more expensive sets, so while it is marketed as a starter set I think it’s better viewed as an expansion set to one of the more expensive sets. Combined with the Harbinger or Extremis Set you have the bedrock of a solid army. It also is a really great set for playing with younger children, who might not be able to grasp a full game but want to just watch the plastic men hurl themselves at each other. 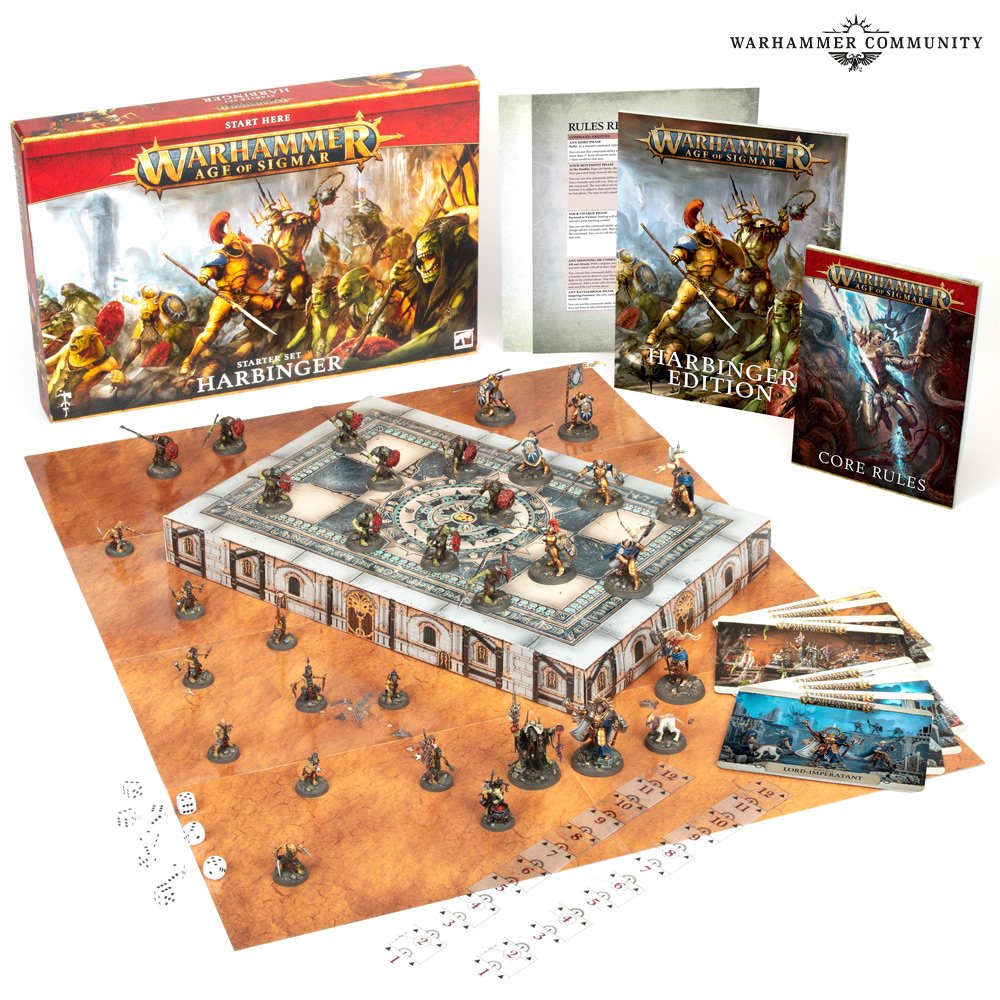 What Minis does it contain?

Man this is…not a good match up at all. Stormcast get a clear point advantage and the Kruleboyz minis don’t get much to work with despite outnumbering the Stormcast more than 2 to 1. The first thing of note is that the Heroes are completely different here, now Kruleboyz get the Wizard and Stormcast don’t. I think this leans into the same problem as the above box, just on the other side. The Knight-Arcanum also has a much nicer spell for new players, as doing D3 mortal wounds is immediate and understandable, while the Swampcalla’s spell that adds +1 to friendly charges and -1 to enemy charges will likely require a few games to understand the tactical uses of.

The Hobgrot Slittaz suck too. Just terrible little gremlins with decent but very short, ranged attack and a terrible melee profile with a redundant ability (6s explode into 2 hits is pretty silly when your entire army can convert those to mortals instead). My hope is that there is some special rule in their battletome or a yet unannounced character who can help them out. About their only saving grace is that the 6s to hit converting to mortals is an army-wide power instead of just your battleline so roll a few lucky 6s and you can win handedly. But that’s not particularly fun nor great for teaching the game. As stated above, combine this with the Warrior Edition and you start to have something here, with 2 battleline, 2 heroes and a specialty unit per side.

The terrain situation is basically the same as Warrior edition. A foldout mat, and you flip the box over to make a single large terrain piece. The same problem remains that it’s not really a terrain piece as much as a weird obstacle masquerading as such so you have to waste time climbing up and down it. Extremis edition is better about this so if you’ve come this far maybe consider it, but if you’re just going to play at your local game store or you otherwise have easy access to terrain, go with this. It’s still a much cheaper way to get access to these models than buying them separately (making some assumptions based on past pricing) so if you are interested in Stormcast Eternals or Kruleboyz and can split with someone this is a pretty good budget friendly way to get into Age of Sigmar.

What Minis does it contain?

No that’s not a mistake, these are the same minis as the Harbinger edition so all the advice about that edition still applies here. The difference is the terrain.

Rather than asking you to flip over the box tray and use that as a terrain piece on top of a paper foldout, you’re given actual terrain on an actual board. The box includes a gaming board, which is sold separately by GW and when combined with another makes a full sized board for 1,000 point games. It’s a bit cramped but as you’re not even cracking 500 points here, it’s enough. It also comes with some of the brand new Realmscape Expansion terrain. It seems to be the only place to get the Nexus Syphon terrain piece as well, as the standalone Realmscape Expansion doesn’t include this. The addition of terrain is one thing that this box can tout having over Dominion, so if that’s important to you scoop it up.

While the matchup is still pretty bad, having actual terrain does make this a bit more appetizing if this is your thing. Add it with the Warrior set and you’re getting pretty close to a real game, as you can run games as low as 750 points using the core book’s match play rules.

In terms of model selection, there is a serious problem here where the Warrior Edition is going to end up a mortal wound fest that will potentially do nothing or knock out the opponent’s unit on the first turn, and the more expensive sets feel more lopsided and don’t give a great impression of how the game runs at 2,000 or even 1,000 points. I think Games Workshop sort of trapped themselves in the logic that including one Hero, one battleline and (for the more expensive sets) one specialist unit will balance things out. This logic simply doesn’t work for an army more built on numbers like Kruleboyz.

While the balance in these sets is dire these are still a vast improvement from the Soul Wars box sets, which contained some unit sizes that weren’t even legal to play! While Matched Play isn’t the only mode to play, new players should assume they’ll be moving in that direction unless they’re going to limit themselves to friends who play Open or Narrative play only. At least giving a player a battleline and a Hero is a decent start, and with 2 battleline and 2 Heroes many players can hit the ground running.

There is a wrinkle here that does keep these from truly being an auto-recommend and that’s Dominion. Games Workshop printed a lot of copies of Dominion, enough that despite being a limited run item they are stll being sold on Games Workshop’s own site. If you are a new player I would heavily advocate you go for Dominion instead. While the price might seem intimidating, the dollar per point ratio is much more in your favor and it has all the models discussed here, plus an extra copy of your battleline and even more Heroes!  The only thing these have going for them is that eventually Dominion will sell out and never come back, and the Extremis Edition of the starters has some pretty nice terrain. If it’s still available when you read this, I’d go for it. Otherwise, grab Harbinger or Extremis (Depending on how important terrain is to you) and the Warrior edition. That’s about as close as you’ll get and it’s still a solid bargain.

If you have any questions or comments leave them down below or email us at contact@goonhammer.com.