A bit of a surprise, on top of our review of the General’s Handbook, going up for preorder this Saturday, and the Battlescroll a series of FAQs were released today covering several battletomes and supplemental material. We’re gonna go through each one and highlight what makes these changes interesting or necessary, and how they could affect your army. You can read along here.

The theme here is around how simultaneous effects resolve – namely the book cites removing models from units that fall out of coherency, deciding which objectives one controls when a unit is attempting to hold multiple objectives and abilities that affect both player’s units (Such as endless spells that hit multiple units). In all cases, the player who’s turn it is is affected first. They must pull models from units out of coherency, choose which objective they control and roll for their own units being affected first. In most cases it’s not a big deal what order this is done, but it can become very important if it’s down to the wire and deciding who controls an objective.

Some other notable changes are that when a unit affects multiple units, the units must be chosen before rolling any dice. if an artefact or ability procs on death but the bearer survives after hitting max wounds, thanks to an artefact or ability, you do not get a second chance to use it. Important with the Fueled by Ghurish Rage ability appearing in the new General’s Handbook.

This…may have accidentally been uploaded too early. We already covered the changes in the review, but in short foot heroes with Companions can still qualify as Galletian Champions and a slight clarification was made with Ravenak’s Gnashing Jaws and decimal places.

You probably guessed these surround the Krondspine and you are correct. The first is that the Krondspine has 18 wounds for the sake of any abilities that require a wound characteristic. The second is that the Wild Form rule didn’t actually include a clarification that it doesn’t need to charge if it’s already in combat.

Wrath of the Everchosen

Another Chaos book, this time Slaves to Darkness, means that the old subfactions need to be struck from the record. Subfactions, including Legion of the First Prince and Knights of the Empty Throne are formally codified in the book now, leaving only 2 armies left. 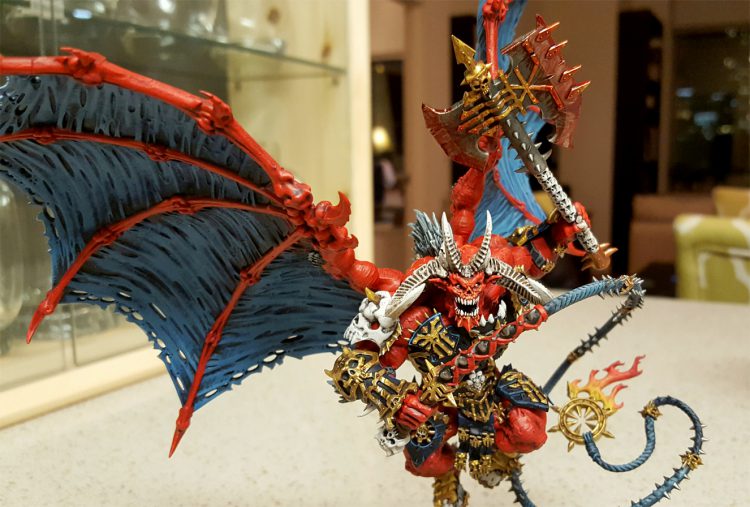 So while this might look like a lot of changes, it’s actually just one mechanical change and correcting several Warscrolls and a battle trait to account for it.

This isn’t really coherent with how Chaos works now, and rather than wait for a new book they went back into the Blades of Khorne book and changed all mentions of Khorne to Blades of Khorne. Allying in Wizards from Slaves to Darkness was also a bit unclear and could be argued that you could create a Khorne Wizard if added as a coalition unit. This has been definitely knocked off. Khorne hates that shit.

Two small changes: First, the Anvilgard Illicit Dealings Battle Trait had the option for Hidden Agents to grant D3 extra command points. This never actually told you when it happens, because in second edition that didn’t really matter, command points were tallied at the start and kept in reserve rather than spent at the end of the turn. Now you may choose which turn you get those extra command points, saving them for an important push.

Second, the Freeguild General Command Ability also suffers from 2nd edition wording by not including retreats in its “do not move” clause, since that wasn’t a distinct move action in 2nd. So now it does.

Overall, just some 2nd to 3rd conversions that had missed the changeover while waiting for a new tome.

The two battle tactics that could gain an extra Victory Point if done with Witch Aelves – Clash of Arms and Tide of Blades, were changed to remove that extra point. This was already placed on the battlescroll, which is generally intended for more “temporary” changes until they are codified into a new battletome or the Pitched Battle profiles. It’s possible they decided it’s best to just make this permanent now.

Morath-Khaine’s damage ability was not very clearly written in how wound’s transferred over. Many thought that Morathi-Khaine could not use her ward save, and damage transferred over to the Shadow Queen who could not negate it. It’s been clarified that Morathi-Khaine still gets her ward save, but if the damage isn’t negated the Shadow Queen must take it. Much more clear.

A rare Path to Glory update, players can now pursue either unique mission when they have completed the requirements for the Essential Soul Raids mission. Mostly because the other mission grants what could be a better reward for some players (Another unit.

One of the changes that is a big deal is to the Gloomtide Shipwreck. When the General’s Handbook was announced, people noted that Companions are treated as Mounts for all intents and purposes in the rules, and this hits Deepkin hard as almost all their foot heroes have a fishy friend. This also brought up the question if Heroes can or can’t garrison in the shipwreck, as it said no mounts allowed. Mercifully the book finally added an exception for companions, so they can take cover with the rest of your army at last!

Mobilise the Fleet now clarifies you must pick units that are not garrisoned and then get them inside of the ship. Garrison’s have caused many nebulous states where it isnt clear if a unit is or isn’t on the field, so it’s not shocking a correction was needed.

One clarification, if Stoneguard receive the Unyielding Toughness trait, raising their wounds to 3 and take 2 wounds can they “refresh” the ability to keep the model alive? A flat no, the ability wears off before it is refreshed again, so a model must die. A fair question to ask.

Two changes, first a unit that heals all wounds can either remove damage or all disease counters, though not both. The other change is the Glottkin’s Horrific Opponent ability, which forces a unit to flee on a failed bravery test or take D6 wounds. It wasn’t quite clear what happens if they can’t flee (usually because there’s an enemy unit or terrain behind them blocking them from doing so), and it’s treated as refusing to run. Brutal.

Interesting ruling, if an enemy cannot be affected by Monstrous Rampages, a Stonehorn can still use Unstoppable Charge. Since the movement isn’t targeting a specific unit, it can’t be negated by such an ability.

First, if a command ability is blocked from Diabolical Schemer from Thanquol, it still counts as being issued. Which means he cannot issue to yet another unit, nor can that order be issued again by another unit. Good clarification.

The other change affects Warlock Engineers and Bombardiers equally. The timing for their “overcharge” ability wasn’t well stated and should be before rolling for attacks, not to hit. Now this is corrected.

First, rules clarification. If Bela’kor uses an ability that would block movement, the target cannot use other abilities that could be substituted instead of, such as Fly High for Kharadron Overlords.

The other change is a bit more substantial. Gaunt Summoner (and Chaos Spawn) got “Slaves to Darkness” added to their name to seperate them from their Disciples of Tzeentchian counterparts. The Silver Tower ability that allows players to put a Tzeentch unit in reserve was pushed up to putting two units in reserve which actually could put this ability over the edge and make the underpowered Mark of Tzeentch a bit more valuable.

This ones a bit of a nightmare. Basically what it says is that if the Sylvaneth player kills any models with rules that kick in when they die, such as Fight on Death or Mortal Wounds those resolve before Fire and Fade applies, so they at least do some chip damage before they leave. This is largely in contrast to how it usually works, where the player’s turn gets priority, though this specifically calls out the opposite. Strange, but it’s the ruling.

A solid round of changes and a pleasant surprise on the back of the rules changes. While most are just clarifications rather than rules changes, it shows how far rules writing for the game has come that the clarity is much more apparent. It has largely been regimented to smaller, more niche scenarios.

With the new General’s Handbook and massive points adjustments it’s a new era for Age of Sigmar. Let us march onward, to victory!