Today we got a whole set of FAQ’s and Errata for Age of Sigmar, the majority of what’s been included is simply codifying the balances from the last Warscroll sheet but some are clarifications that players have been asking for for some time and very welcome to see. You can see what we think about the changes from the last Battlescroll here. Otherwise, we’ll cover the new stuff in this article. The actual newer changes from today effect only a small number of armies and only a few interactions.

Two quick clarifications that were both helpful. One was big and one less so. First, a hero picking an arcane tome can pick a spell in the spell lore as an allegiance ability. It was generally being played this way but I can understand the confusion about what step you picked a spell for each wizard (before or after an artefact).

The other one is…big. The question is if you use an ability that adds extra damage (such as Flaming Weapon) and then an ability that sets your damage to a certain number, the latter overrides it. This is going to matter for Bounty Hunters, Fulminators were liable to be one of the top units to put in Bounty Hunters, as they get 3 Damage on the charge. Far as the wording of this ruling implies, it and similar units would not get the +1, at least for the turn of the charge.

A few important changes from one of the newest battletomes on the block. First, a minor change on Shadow Queen’s warscroll to state that any wounds past 3 are ignored firmly and definitely. This is due to a poor word choice on the initial draft of the warscroll which said any wounds past the third are “negated”, but any wounds to Morathi-Khaine are transferred to the Shadow Queen and cannot be negated, meaning this ability essentially did nothing after 3 wounds. It also meant that certain abilities like Sigvald could bypass it and do damage freely. This change returns it to how it worked originally, and probably always intended by the designers.

Next, Zainthar Kai, the subfaction that allows Melusai to fight on death took a slight hit. They now can only fight when killed by a melee attack, making them far more open to being picked off.

Finally, two minor clarifications. The first removes “Already shot” from the Melusai Ironscale’s run and charge ability, as it was redundant. You already could shoot and charge, making that part of the ability unnecessarily. Mirror Dance also added a negate clause if swapping models was impossible, a realistic situation if one was surrounded in combat and were different base sizes, making it impossible to actually swap them. In this case you just return them to where they were as if the spell didn’t happen.

Perfectly suitable changes, mostly just clarifying gameplay mechanics with only the Zainthar Kai ability being actually changed. It’s going to be more important for players using the faction to be wary of being picked off by ranged attacks to shut off their powerful ability.

And just like that all of the Kharadron players finally receive an answer. Kharadon units that are embarked on their ship are able to leave their garrison during the movement phase, before the ship moves, and then both units can make a normal move or run after. This has been the single biggest question for Kharadron players since 3rd edition dropped and changed the wording around garrisoning. It’s nice to finally have an answer on how they’re meant to interact.

Also, Great Endrinworks are officially Unique Enhancements. This has been played this way pretty much since launch but good to know.

The only things here are a small clarification to Epedmius’ tally rule, allowing only 7 diseases to be tallied across a game in total and also specifically that if Gotrek is affected by Disease he will only ever suffer 1 wound from it, regardless of the amount of disease tokens. 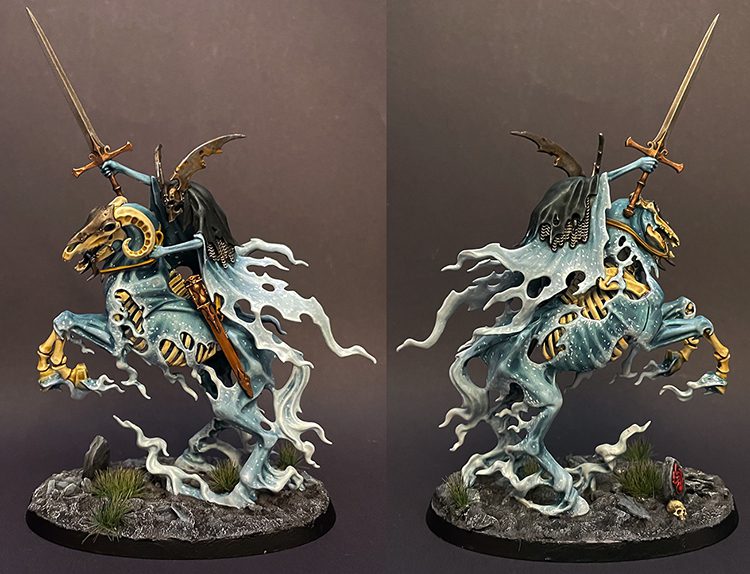 Nothing too exciting here, Furies can retreat away from Grieving Legion units in the combat phase which normally doesn’t allow that. Dreadblade Harrow also can chain command abilities and copy an order issues from the General to themselves or another Nighthaunt unit. The clarification that they must be a Nighthaunt General is basically stating you can’t do this trick when allied in with Soulblight.

Two hidden changes, in its warscroll Mortalis Terminexus had its range extended from 12″ to 18″, increasing its viability a little bit. Finally one thing not stated is that Reiknor’s Condemned from Broken Realms is not invalid. While Emerald Host has been updated with new material, Reiknor’s band was not which means that you can still use them if you so wish.

Yep it’s Get Orf’ Me Land! again. Despite saying that you can pick “one” hero with this ability, some people were still confused if it meant it was ok to use it if you targeted different points with different Kraken-Eaters. No, no you can’t.

Only one note here, but an interesting one. The Mortis Engine’s ranged attack Wail of the Damned is an Area of Effect attack that hits any enemy unit within range of it (the extra distance shrinking as it takes damage) on a 4+. The curious question is how that interaction works during Unleash Hell? The decision was made that it only affects the target that charged. This is one of those rules interactions that boils down to “because we said so” but a perfectly valid way of ruling it nonetheless. Sadly the Mortis Engine doesn’t see a lot of love in Soulblight lists lately so it’s unlikely this will really be needed soon

Nothing super exciting here which we probably to be expected. Anything big was going to be in the Balance Warscroll from a few weeks back.