During the last weekend of January the first major tournaments of 2020 occurred and it was the first chance to see the meta really take shape for the year. I had left out one major tournament in Part 1 of my analysis, the Warhammer GT at Warhammer world so I’m going to include that here as well. There are a couple ways to approach this but I’d rather take a broader approach and look at all three tournaments as a while, because despite being on separate parts of the world I think it has a lot to say about how the meta has gone in a broader sense. So I’m going to put all the cards on the table first and then open with my discussion.

Couple of notes: The Warhammer GT didn’t publish subfactions like the other tournaments, and Las Vegas open was the only tournament to not allow the new Disciples of Tzeentch and Kharadron Overlords tome, which has a major effect on the results 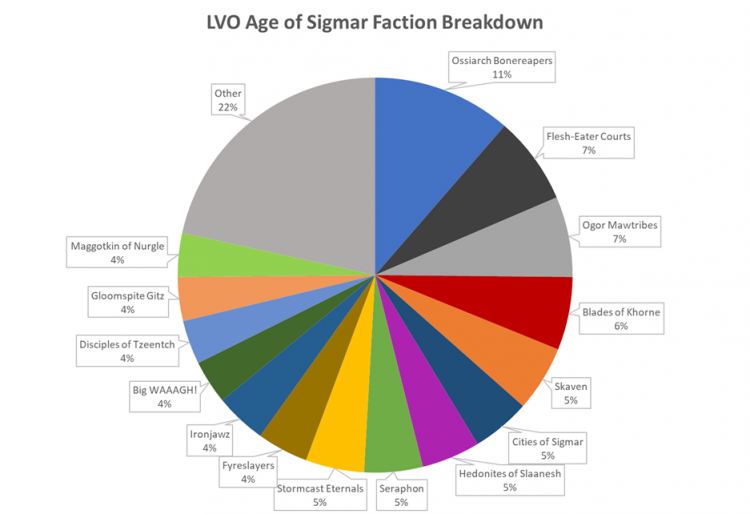 Ossiarch Bonereapers and the Disappointing Premiere

The big shock from this weekend is how Ossiarch Bonereapers…didn’t actually do very well. In every tournament, Petrifix Elite outnumbered other armies at every convention by a fairly wide margin. Yet in every case, only 1 list made it to the top 8 in each case. So what happened? I have a couple of theories.

All that said I wouldn’t say it performed terribly, just that its expectations were set so high and the proliferation of lists using Petrifix Elite lead people to believe we’d see a stronger showing. They tended to crowd pretty well in the middle. 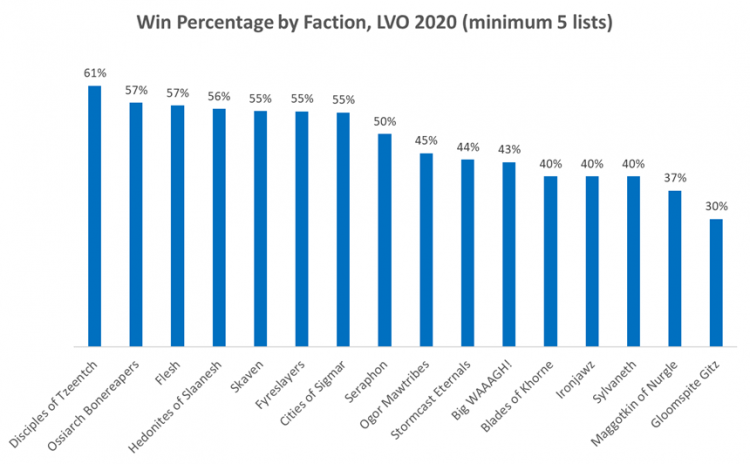 The Rise and Fall of Tzeentch

There’s no ignoring that Tzeentch did extremely well over the weekend and it’s been explained to death as to why. A powerful new book which served as a hard counter to OBR. The book seemed posed to disrupt the game but within 2 weeks of release Games Workshop made sure to release an FAQ addressing some of the bigger problems. I talk about the changes in-depth here but the short version is:

Admittedly this throws a wrench in a lot of the data that could be analyzed over the weekend tournaments. The biggest takeaway was that Tzeentch was powerful and could disrupt most every other army that was vying for top spots. Now we get a hard nerf to a lot of the things that made that army so good in the first place. I think it may draw Tzeentch back into the same win ratio as the other top armies without completely lopping it off. We’ll likely need to wait till Adepticon in March to get a new assessment on what the meta looks like.

For the time being, we can look at two other recent GT events, where it looks like disaster has been averted for now, but Disciples of Tzeentch may still have some staying power:

Some other strong armies after the Ossiarch Bonereapers and Disciples of Tzeentch were the long time winners: Flesh Eater Courts, Slaanesh and Skaven continue to maintain their rank in the upper echelons. Despite the hit that Slaanesh took in the December FAQ it seems like they weren’t slowed down too much. Fyreslayers, Cities of Sigmar and Seraphon maintain a respectable win ratio. Overall Outside of Maggotkin of Nurgle (Which uses an Older book) and Gloomspite Gitz (Which tend to have a strong luck factor) I’d say the meta has remained pretty stable. Most every army seems to have a pretty fair shot at winning and that’s a good thing.

In the upcoming months we know that Seraphon are getting a new book, and the new Lumineth Realm-Lords will premiere some time in the spring. I thought that the meta was going to start to stabilize but it seems like things are only going to shake up even more. Seraphon hold their own without even having a true battletome so they will likely be a sight to see once they have a full ruleset backing them.