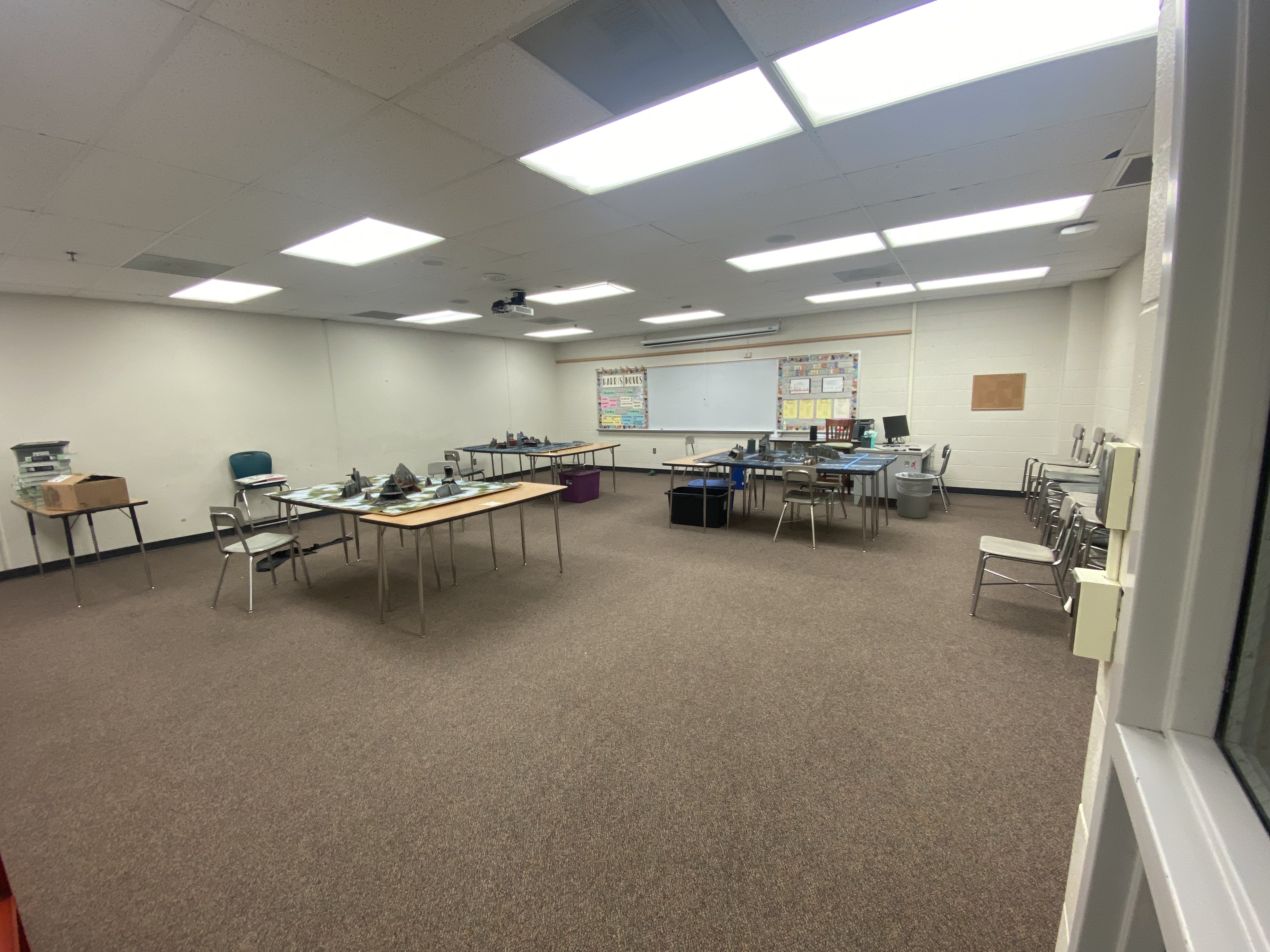 Bugeater was one of the larger events that was canceled last year due to the Global Pancake (cuz what a flop 2020 was, eh? …eh?) and so with the release of the vaccine and the ability to spread tables out enough within the event venue to accommodate, we’re back to cries of “Let the games begin!” I attended this year’s Bugeater GT in Omaha, taking Lumineths. Games at this event were run entirely in the Realm of Shadow – that’s pretty big buff to Spellportal and Geminids ( Like they needed buffs). But that kind of thing happens at events. And you just got to play and plan around it.) The missions chosen for this event had a decent spread of Hero required, monsters benefit, battleline benefit, allowing most lists to be able to shine in many of them and at least be playable in others. Having a diverse army or one that synergizes with them was definitely possible for most lists.

Other event rules to keep in mind:

Note: Almost none of my opponents/or the other players put their lists into BCP for the event so I’m going off what I can remember of them here.

– Lore of the Winds: Transporting Vortex

Sevireth, Lord of the Seventh Wind (300)

– Lore of Hysh: Protection of Hysh

If you remember my original comments on Sevireth and the Windspirits when we first saw their rules, this is my way of explaining my opinions on the quality of a warscroll/army, to bring that idea to a major event and let it stretch its legs. To reiterate, this army is extremely mobile. It shoots REAL hard. You might look at it and think it doesn’t shoot as hard as KO, or as oppressive as Eternal Conflaguration. But the ability to “scalpel” targets is akin to Host Arcanum Tzeentch mortal wounds. and with such high rend, they might as well be mortals. The list generally can’t get charged. and is a 9” threat in every combat phase even if it isn’t actually in those combats. 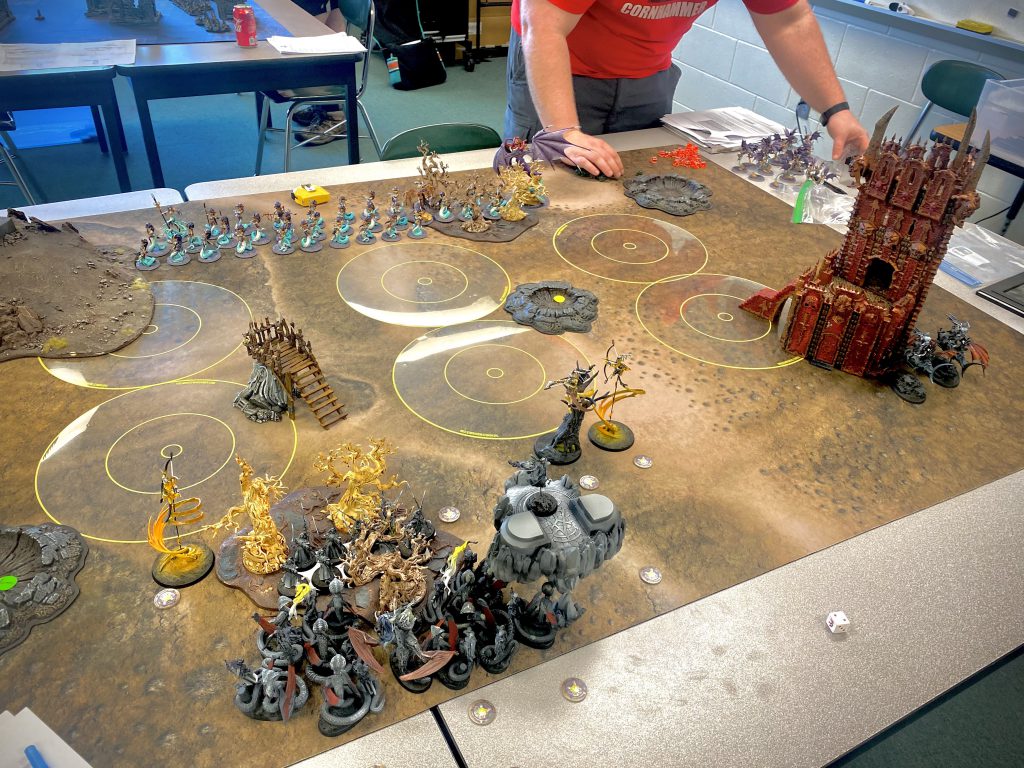 Right off the bat, this was a great game that was super close, and had many many dice rolls gone a little more in my favor, me making mistakes early on could have been rectified. BUT! That is how the game goes sometimes and that is 100% OK. Especially when you are also bringing a pretty lean and powerful list. I had fewer drops than my opponent and got to choose whether to go first or second, and I knew I had the mobility to take max score turn 1 and realistically not loose any models on the the receiving end of his turn 1. One of my secondaries that I chose was to kill 3 of my opponent’s units in a single turn. So, on top of max scoring turn 1 primary, I figured my wind spirits, if rolling properly, could take out all three of his little heroes in one go. I went first.

But as they say – the best laid plans of mice and men often go awry – especially when there’s dice involved.

During my entire first turn, including Sevireth’s flyover mortals and x12 shots hitting on 3’s (due to look out sir) wounding on 3’s, at least rend 2 and d3 damage… I did a total of 3 damage to one of those heroes.

I then backed off with the Windspirit shooting phase move, scored my 6 primary points and passed turn.

On my opponent’s first turn he stepped up and took his three heroes back from the cheeky wind spirits who just backed up so they couldn’t get charged.

Then the roll for priority went in his favor. The 20 combat snakes then ran all the way to my side of the board, jumped on my backfield objective being held by windchargers, and killed them. This took him up four points to a 7-6 lead.

On my second turn, my sevireth, guns, shark harpoons and then Empowered 10 spearmen and sharks collided against his “darkness of the Soul”-ed snakes, my sharks swung. And after 8 attacks, 3+ hit 3+ wound -2 2 damage. One bite went through, killing one snake. Meanwhile the Wardens did 10 mortals and a few more regular wounds. Are sharks scared of snakes or something? Were they just tired? I don’t really know, but they let me down. I also score four points on the primary, making it 10-7 and I’m in the lead again. 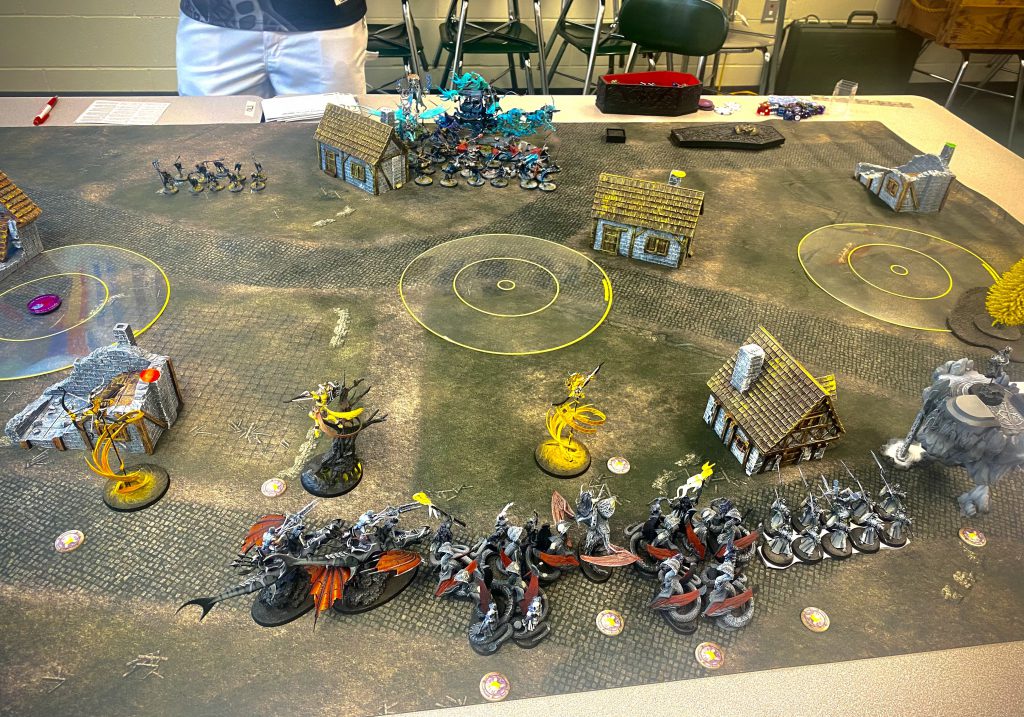 Mission: shifting objectives Vs Nighthaunt that had just played against my mate Bill Sweidan’s KO.
(what a trooper, and a great sport to boot.)

Before turn 1, the Loreseeker sat on the objective furthest from my opponent’s deployed units. While deploying he put his hexwraiths in the sky to deep strike in and charge later, so I screened my deployment with Sevireth and the 2 wind spirits. This was because at the end of his shooting phase the Windspirits could move 12”, thus moving them out of his 12” reach to declare charges. My opponent goes first, and scores 2 objectives but not the “shifted” objective, and so with battleline units, ended up scoring 4 points on the first turn, taking an early 4-0 lead.

On my turn one, 5 windchargers and a spirit take out his 5 hexwraiths holding the side objectives, while Sevireth and the other windspirit, windchargers, and the sharks all collided with pretty much everything he had on the middle objectives. Which was basically his entire army. I scored the shifted objective, plus another with a battleline unit, bringing the score to 4-4.

If I remember correctly I did double 1-2. The shifted objective stayed in the same place. (Well done, Mr Loreseeker, you just keep doing you over there). The rest of the army shot and fought and Sevireth-Ping-Pong’d mortal wounds all over the center objectives just grinding the enemy army down just a little bit more, over and over. His turn 2 was almost completely centered on fighting the center point. At the end of 2 I’m up 8-6.

Turn 3 is lots more grinding. The coach got some cheeky chargers but then got stabbed to death by wardens with at least one of his heroes dying at least once per round. I’m up 12-8 and by turn 5, he hadn’t had enough left on the board, and had only killed the sharks by the end of the game.

Again, my opponent was a real trooper and was impressed with my list rather than disheartened by the loss. Seriously a champ. 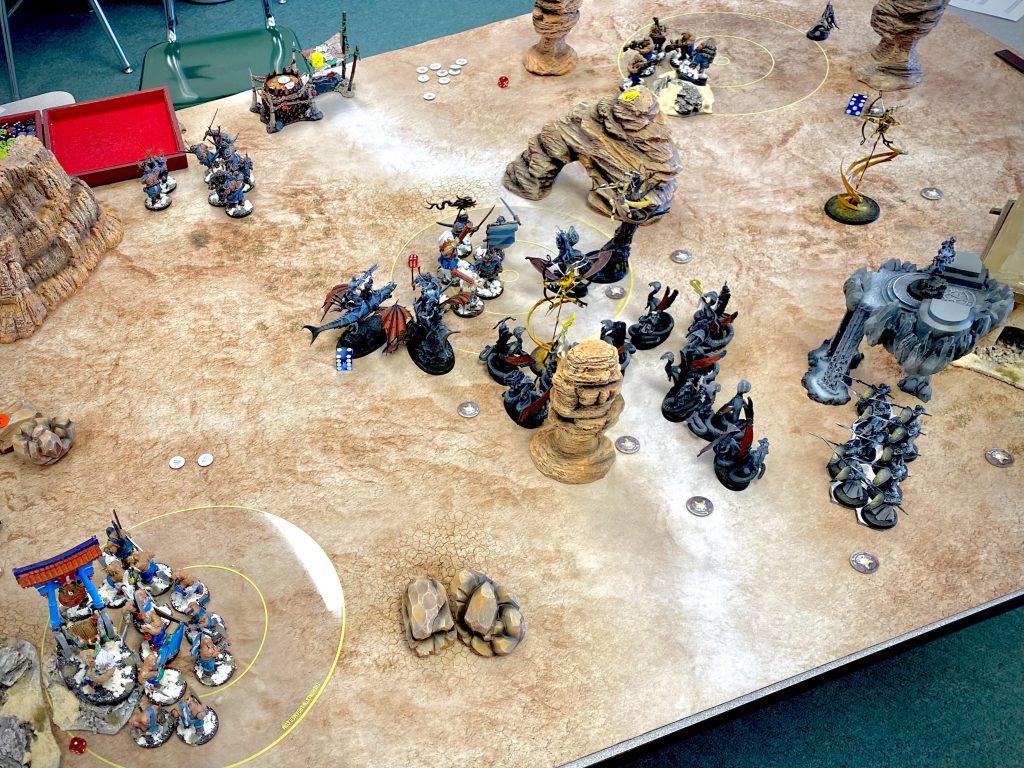 If you think that an army with 3 walking heroes taking on one with 3 wind spirits, a few units of shooting, a loreseeker, and 2 sharks on a mission in which only heroes can score would be in for a rough game well, you’d be right. It was a tough game. But my opponent was also a trooper about it. He took the first turn and grabbed the center as well as the objective on my side of the table. Meanwhile the loreseeker was sitting on the one closest to my side just mad chillin’. He takes the lead 2-0.

Then it’s my turn, after which is when I took the photo because I forgot to take one right after deployment. At this point I had shot or fought off 10 out of the 16 Ironguts (five per squad) and taken half the wounds off his Tyrant. He’s still up 2-1. Then he wins priority but  I end up killing his Tyrant and the other Ironguts on the bottom of his turn and he’s up 3-1 coming into my turn 2. Then I kill his butcher on his way to the loreseeker, with 2 windspirits shooting and combat, while the sharks and windchargers moved over to start tearing down his 8 gluttons and slaughtermaster. At this point the game is over. I score 2 meeting 3/3 on primary at the bottom of 2 and he has 1 hero left for scoring while I have all 4 still available. 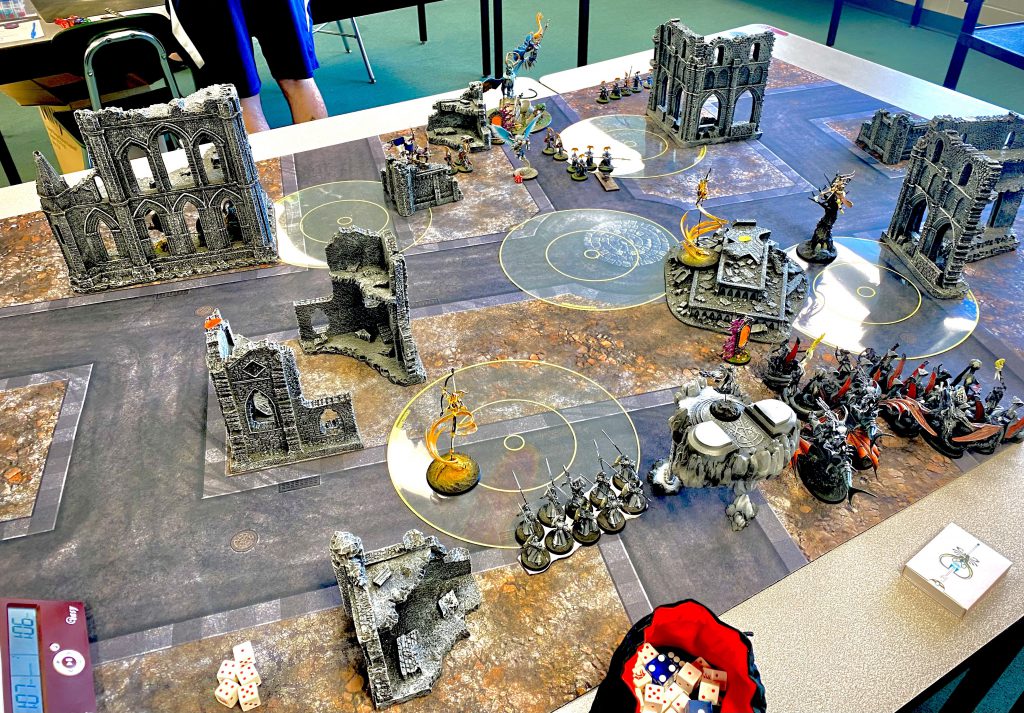 This you might notice has been the only photo with a chess clock. That’s because I was up against some who I and others have had repeated complaints against for slow play. And just generally going up against him as been a negative paly experience, mostly as a player and not his actual lists (although this one was pretty gross).

I took the first turn and instead of going for Teclis, I went for all 30 Lumineth infantry. And by the end of the turn’s shooting/combat and ping pong Sevireth over the light of Eltharion, he had 3 or so models left in each unit of Vanari, and L.o.A. was dead.

He doubled 1-2, with Teclis blowing up a lot of stuff – I lost Cathilar, the windmage, the loreseeker and a windspirit. On my turn 2 I killed his Celestant prime and Teclis, and then by the bottom of turn 3 he was tabled. And I jumped ahead on the bottom of that turn anyway, finishing the game. The game ended with an hour left in the round and 20 minutes left on his clock. 40 on mine. 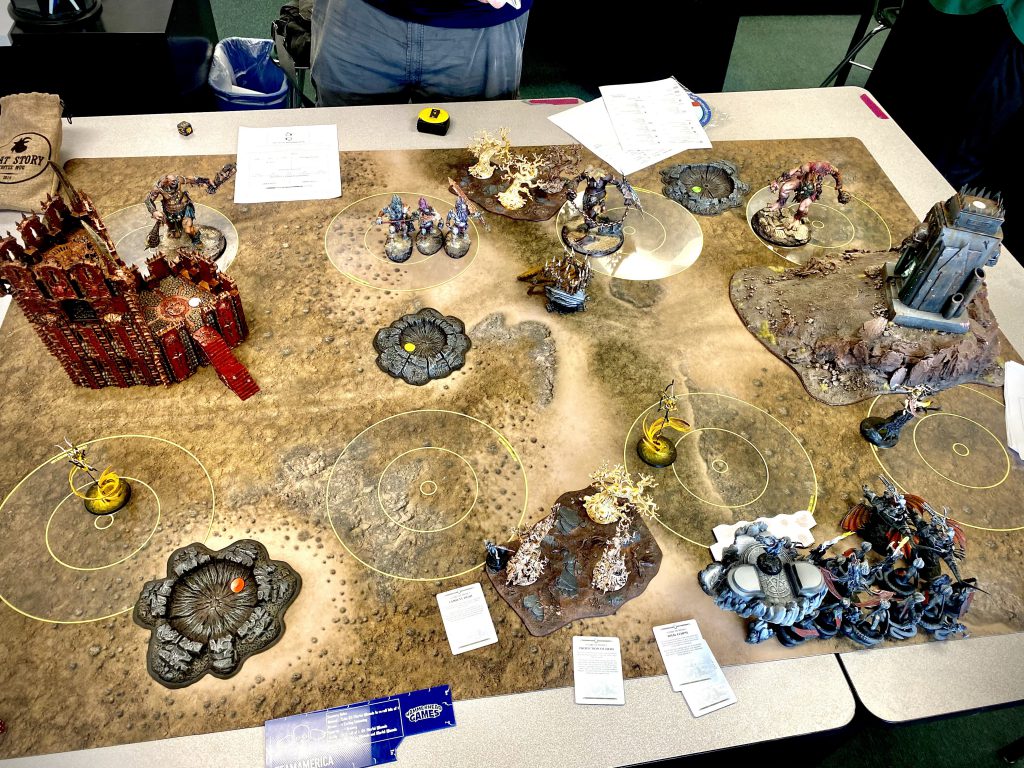 Skorched earth VS Breaker Tribe Sons of Behemat.
(who also had just come off a game against my buddy Bill Sweidan who was playing for 1st place.

This Battleplan was also a big problem for a list that can only realistically score 4 objectives at once, and against an army who moves away after you move closer. Very rough matchup for The Sons of Behemat. Though luckily the player was also a good dude. Emotions got a little spicy at least once because my army just does not interact with his and that got understandably frustrating but we talked about it and things cooled off. I would have no qualms hanging with him outside the event. Great guy all around.

the game started with my secondary mission to take his 3 Mankrushers off the table, so I only put the 3 wind spirits “into harms way” and shot and fought one and a half of them off on the first turn. On his turn the windspirts just buzzed off, and then he failed to double so the windsprits “buzzed back” to finish the job on the Mancrushers.

On his turn 2 he decided to ignore the wind spirits and then pushed a column of Megagargants down to my side of the board to take out my backfield. As the Giants came marching 1 by 1 (Hurrah! Hurrah! — Just to get that song stuck in your head), the first one got jumped by Sevireth, a windspirit, both sharks and 10 windchargers and was brought down in a single round. The next turn the 2nd giant made its way over and killed the wardens and then a shark, and then got ripped apart, ending the game with 1 megagargant left.

All in all the games were great. People were excited to be playing again. The event was held in a school and Sigmar and 40k were in different wings of the school, but max we had 3 tables per room and were all separated enough to keep covid spacing and guidelines pretty well adhered to. Which is good.

I had four great games and one match I knew I was gonna have to play because that’s just how it’s gone the last two years.  But. It worked out anyway. Mistakes were made and Lessons learned in round 1; now I’ve got to make sure they never happen again. And as I had thought going in, the list is utter filth. So it’s on to ACO with probably the same thing.

I will be a pretty busy bee this week in prep for said ACO and some of the upcoming releases so if you would like an in-depth review of my list, you can catch me over on my Patreon. There’s a lot more to cover and I’m happy to answer more detailed questions about the army, how it plays, and how to tackle whatever an event throws at you.