Previously on Road to NOVA…

Having made a critical self-assessment of my available hobby time, I decided that abandon my plans to bring Chaos to NOVA 2019 and instead bolster my existing Aeldari army by turning my Biel-Tan and Iyanden forces into a mixed Ynnari Army led by Yvraine and the Visarch.

Progress Has Been Made

The good news is that some progress has been made since my previous post. At the time, I identified 3 character models that I needed to get done for my hypothetical list:

Well, the Farseer is done!

In a prolonged period of madness, I acquired many many metal Eldar models in 2017 and it is very gratifying to actually make use of one. In this case, the Farseer sculpt is a fantastic one and easily holds up alongside the newer plastic Farseer. I really enjoyed painting him and he will be a useful addition when I can’ spare the point for a Farseer on bike.

Rather than move on to Yvraine and the Visarch, who both fill me with great trepidation, I then chose to touch up (or finish up) some of my older models that I have long neglected. I expect that one of the main stars of my list will be the almighty Wraithseer. I originally painted him up for a tournament in 2017, when he was T7 and cost way too much, so it’s been interesting to see CA18 and Index: Ynnari suddenly turn him into a very interesting choice. I look forward to fielding him on the tabletop.

You may note the Wraithseer is missing a base. Originally I had chosen to base my Biel-Tan in a dark wraithstone theme while for my Iyanden I went for a Hive Fleet Kraken basing theme (in line with the Craftworld’s fluff). Now that I am moving forward with Ynnari, I have decided to unify their basing schemes and go with wraithstone all around. I am sadly away on business as of this writing but just before I left new bases came in so expect to see finished shots of the Wraithseer and his new base a week from now!

The next model to get this kind of treatment will be my Hemlock Wraithfighter, which is sadly missing decals and edge highlights (and it will need to be rebased).

When Kill Team launched, Craftworld Eldar were underwhelming, to say the least. While their 2nd place showing at LVO in 2019 showed they definitely passed competitive muster, the reality is that a Kill Team of Guardians and Storm Guardians is boring as fuck. If only Eldar had dedicated warriors ideally suited for small-scale covert operations…

Fortunately, with the launch of Kill Team: Elites, the Craftworld roster has been significantly bolstered by two additional Aspect Warriors (Striking Scorpions and Howling Banshees) as well as some robot ghosts (very expensive robot ghosts). While neither Scorpions nor Banshees are particularly incredible in 40K proper, Kill Team will really play to their strengths and I am very excited to field a solid council of Exarchs. NOVA will be using Arena rules for Kill Team and all the non-Commander portions of Elites will be included, so I have a draft Biel-Tan roster ready to go: 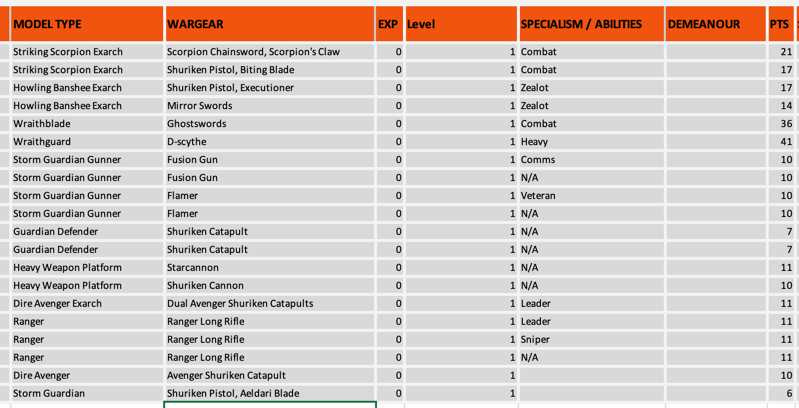 This isn’t entirely locked in yet but I think it’s a solid start. I imagine I will always be maxing out my exarch allocations as well as the heavy weapon platform (with its escorts) and 1-2 gunners with fusion guns or flamers. So while subject to change (the Wraiths are questionable at 100 points, and rangers are of marginal utility), it gives me something to go with for now.

This roster also gives me a fair bit to paint. While I have dire avengers and guardians galore, I’d like to do something special for the gunners and need to get the exarchs painted (which I’ve started as seen above). All in all, I am very excited to Eldar a try in Kill Team, my previous competitive outings have been with Deathwatch and this will be a very different experience.

As I mentioned, I am away from the painting table for a week, which saddens me greatly. However, once I’m back I hope to wrap up my Striking Scorpion Exarchs and then I may have worked up the bravery to start on either the Visarch or Yvrain (definitely the Visarch). Once I have those three characters done, I have some smaller infantry squads I’d like to work on as well as models for Kill Team. Ideally, I’d like to get a squad of Howling Banshees a well as a squad of Wraithblades (and a Wave Serpent for them) substituted into my list, but we will see if that is feasible.