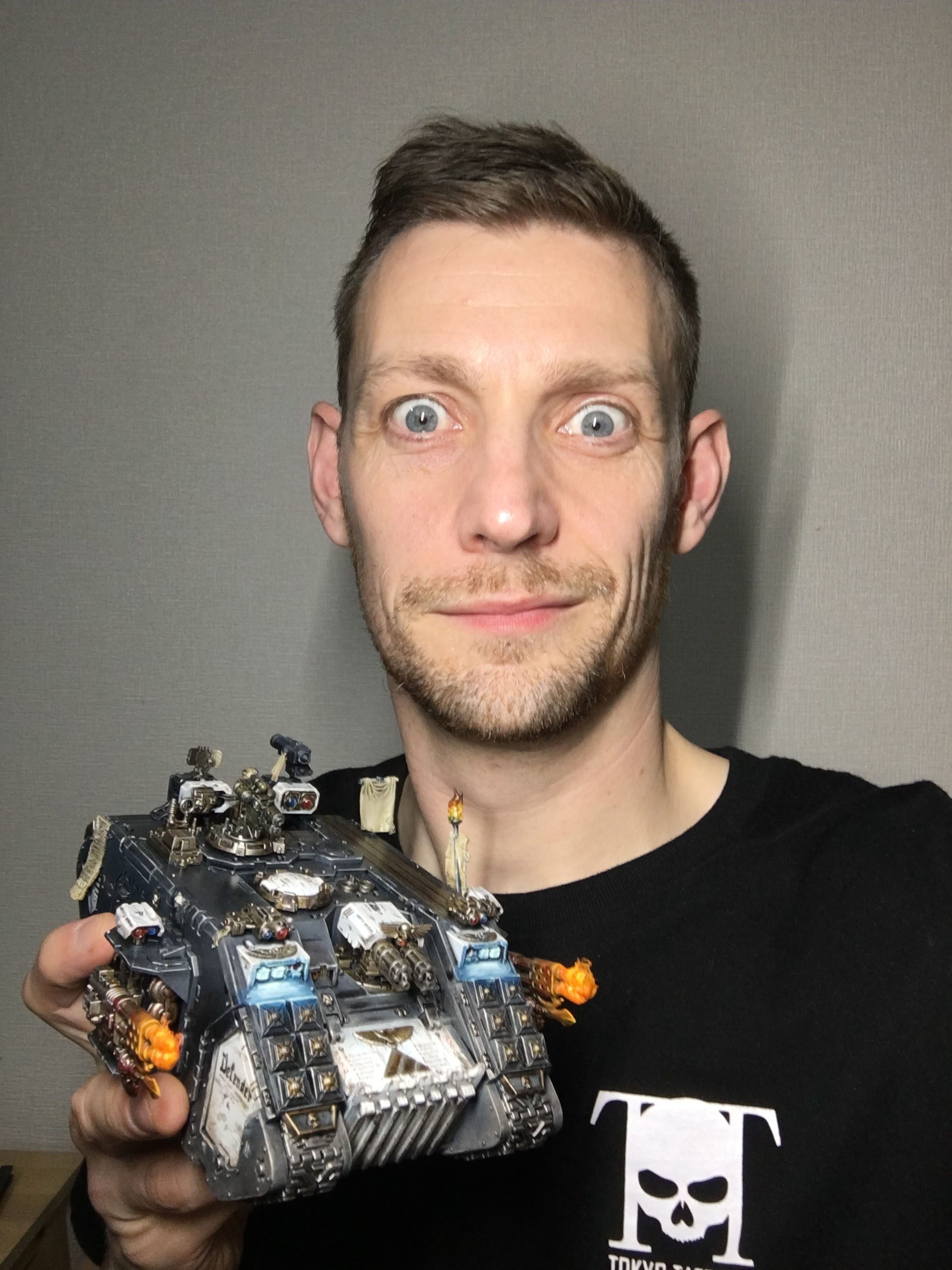 The Warhammer 40k Tournament Scene is much bigger than the US and Europe. This April, the Tokyo Tactical gaming group will be hosting its first ITC RTT, a 32-player event called the Tokyo Tactical Reborn. Goonhammer sat down with David Moss, one of the international members of the group, to talk about the group, the scene in Japan, and their upcoming event.

Q. Hi David, thanks for taking the time to speak with us. I’d like to start by asking about yourself: What’s your story? How did you first get into Warhammer and how’d you end up in Japan?

Like many people I started 2nd Ed when I was maybe nine years old, had a good few years away from the hobby and then got back in with the release of 8th. If you want to know more about my earlier hobby days then check out the Warhammer Community’s Voxcast with my brother, Phil Moss, who’s a resident illustrator at Games Workshop! He talks about our shared passion for the artistic and creative side of the hobby back in the good old days of paper back banners and black and white pencil illustrations of the Grimdark in all its glory.

Fast forward to 2007 and I came to Japan looking to work and travel but instead the company I was working for went bankrupt a few days after I arrived and I was stranded in the land of the rising sun! I’d actually sold off a lot of my 40k stuff to fund moving to Japan and at that point I think there were only a couple of Warhammer stores and they were very small.

Anyway, nearly a decade after that I stumbled across a newly opened Warhammer Store in Harajuku (Rob’s Note: Having been to this store, I can confirm that it kicks ass) only five minutes from my work and lo and behold there is a new edition of the game with the rulebook cover illustration done by none other than my brother, Phil! And within a few weeks the hobby had me again and now I’m three armies in and helping to organize the biggest events Japan has ever seen!

We are an event organizing group who not only run competitive tournaments but also run community events such as workshops for improving game skills. We’re all about bringing the scattered gaming communities in Japan together and building bridges which can help us all to enjoy all aspects of the hobby more. It was all started in 2018 by Jon Williams, who received one of the Warhammer Community Heroes awards this year in recognition of the hard work he put in to start this all.

We started with small 20 player singles events using ITC missions and after we had a single pioneer Japanese player join us we decided that we needed to become fully bilingual and help the Japanese locals and our own foreigners fully integrate more. It was no easy feat but we are there now with our most recent events having players from Japan and at least seven other countries mixed all throughout the rankings.

From 2020, Tokyo Tactical has refocused in order to have a regular schedule of large and small events all over the year and being more present internationally to advocate 40K Japanese players worldwide. Check out our new website with a series of current players’ armies, articles on Japan’s WTC team and more.  We are also focused now to have our first 2 days GT event (50 players, 5 rounds) by next year which will be a great achievement given our small-size community. 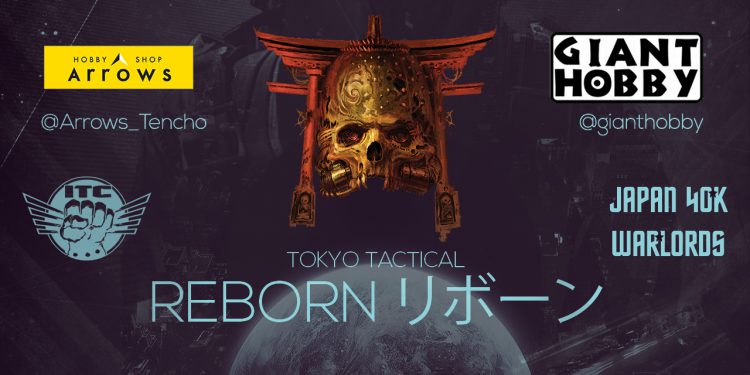 Q. That sounds great. How often do you run events?

Previously we were running one or two events a year as we were concentrating on bringing the communities together. For 2020 we have our Reborn event in April and then we plan to have a workshop about list building and advanced play tactics soon too. Later in the year we have a narrative event planned, which is going to be a challenge to do bilingually, and we are also looking to have another large event late in the year.

We are also really lucky to have great independent stores in our community who we can collaborate with to run smaller 12 player events. This was especially useful when we used a practice tournament to get the best Japanese players comfortable with using chess clocks for the first time before our main event.

Q. What’s the competitive scene like in Japan? Is there a scene outside of Tokyo?

Our events are currently the biggest there are and the only ones run bilingually. There are currently seven Warhammer Stores in Tokyo and the surrounding areas but only one store outside of Tokyo in Osaka. So Tokyo really is the hub of wargaming with our own events and occasional events run by Arrows and Giant Hobby FLGS. There is also a small but regular scene run by hardcore gamers at the West Tokyo 40k group who are mostly gamers from the military bases here. There is also the Rising Sun group who run AoS and 40k events in Osaka too; and NagoyaHammer in the middle of Tokyo and Osaka.

There are a lot of very good gamers here from all different groups and the meta is quite varied too, but the focus is often on these smaller events and local players rather than what is happening elsewhere. And let me tell you, there are some very delicious-looking armies out here. We really strive to make sure our tables and terrain are the best level they can be and the players bring some stunning armies to play on them.

We have also just formed the first ever Team Japan to go to the WTC this year so we are supporting those players by helping them to run practice events and improve their English skills. It’s an exciting time to be a wargamer in Japan!

Q. You mentioned that Tokyo Tactical includes Japanese and International players. How do you deal with the language barrier during games and events?

It’s a big issue, but one that thankfully GW has put huge efforts into fixing. Serious translation of the game came only after 8th was released so the rulebook, Maelstrom cards, datacards and the first wave of codexes were not translated and never will be. You know the little pull out foldable pages with the core rules on? Those few pages were the only things available in Japanese!

We had a serious shock when we found out that the first Japanese FAQs were actually one edition behind the English ones so we were playing two different versions of the same game. Imagine the look on my opponent’s face when I had to explain the FLY nerf to him!

Now GW has expanded their translation team and all new products from codexes, Chapter Approved, White Dwarf and of course the FAQs are released in Japanese and English simultaneously so there are some absolute hobby heroes doing all this work behind the scenes.

Our mission packs are all made bilingually, our event judges have to be bilingual and we even put in a huge effort to make a bilingual app which is free to use on our website now here (and soon available on mobile phone with our partner Fukukan). Players can use this to just press a button for the main actions in the game and the translated command comes out in a dramatic Japanese/English battle voice! I urge you to give it a go!

I will say one thing about playing against someone who doesn’t speak the same language as you. It instantly forces the two players to have a deeper layer of trust and respect than what may occur in a normal game. You both know you are there to enjoy the game yet you are both aware that there may be difficulties. But accepting that makes for games that are really enjoyable and can often feel like a shared achievement. Rather than “I beat you!” it’s more like “Wow, we managed to do that together and it was great!”

Q. Thanks for taking the time to speak with us, we’re looking forward to previewing the event later in April!

We’re more than happy, and thanks so much for helping shining a light on our community.

A big thanks to all our sponsors who have helped get us where we are today and especially local hobby stores in Japan Giant Hobby and Arrows for growing the Japanese community and supporting our event with prizes. For the first time also, Tokyo Tactical Reborn event will have some well-known international sponsors among which are Kromlech, Warzone.eu and The Art of War. Finally, a huge thank you to GW Japan and especially the translation team. I don’t think they get any credit for what they do but they are absolute heroes of the highest order!

We’ll be covering the Tokyo Tactical Reborn RTT in greater detail later this year, with a preview in advance of the event with lists and a follow-up analysis of the event itself. If there’s anything else you’d like us to cover about the event, or if you want to see more coverage of international events like this, feel free to drop us a note in the comments below or email us at contact@goonhammer.com.