The Nexus is open… who will harness the power? Credit Mantic Games.

The stories of wargaming settings are often pushed forward and expanded by the content found in various novels and rulebooks. Yet it is always most exciting when the community gets to play an active role in the direction the story may take. Mantic announced in May the dates in which their latest global campaign would be run. For those unfamiliar with global campaigns in wargaming, the general idea is that everyone battles each other around the world, but these battles actually mean something! Results are collected, tabulated, and analyzed until the ultimate outcomes are decided. Every game matters. Yes, even yours!

To bring you up to speed, the campaign follows the events brought about by the Abyssal Dwarfs in the Halpi Mountains. Dravak Dalken, chief ironcaster, sacrified hundred of dwarves in order to create the Nexus; a tear in reality to the magical planes of existence. Dravak thought himself alone in this discovery, however champions around the world felt the draw of such incredible power – and so battle will soon ensue!

We’re super excited about the campaign and have a ton of questions about it. So with those in mind, we sat down to talk with Rob Burman, Mantic Games’ Online Sales and Social Media Manage to discuss the campaign and how gamers can engage with the upcoming Fight for the Rift Kings of War Global Campaign.

Q. Hi Rob, thanks for speaking with us. First, tell us a bit about the campaign – What is it and how does it work? Is it simply a tally of victories between alignments/factions, or does it involve special scenarios being played?

Rob: The campaign is going to be an overall battle between the forces of good and evil – neutral players can decide what side they want to fight for. The good factions are trying to stop the Nexus spilling its dangerous energy into the atmosphere above Pannithor, while the forces of evil are keen to harness it for their own nefarious means. Depending upon who wins, we’ll change the narrative in upcoming supplements.

We’ll also be tracking individual faction victories to see if there’s one particular faction that comes out on top. For example, if the Free Dwarfs have more victories than the Abyssal Dwarfs, then they may start claiming back the Halpi Mountains. Meanwhile, if the Ratkin do better than the Goblins, then they’ll claim more of the area of their nest and push the goblins out. 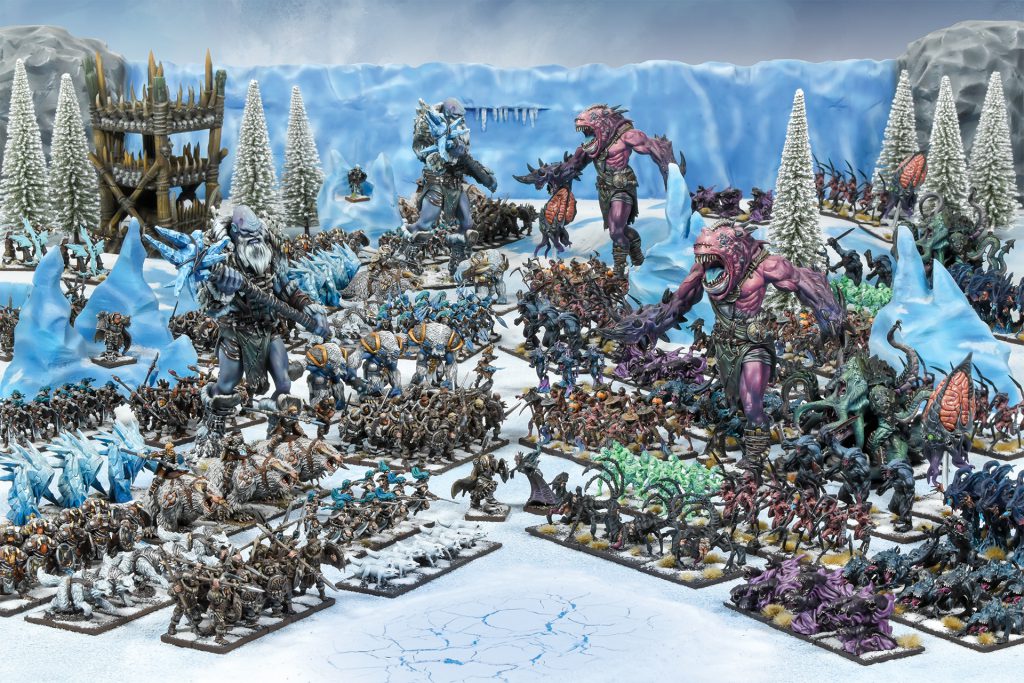 The Northern Alliance holds against Nightstalkers of the void. Good versus Evil. Credit Mantic Games.

Sounds neat. How do players contribute to results?

Rob: From August 27th to 30th, we’ll be inviting people to upload their results to a special campaign, which we’ll unveil closer to the time. If you can’t actually play that specific weekend, then you’ll still be able to upload your results.

Can individual games add to the results or is it only games played at events?

Rob: Absolutely! We really want Kings of War players around the globe to grab some buddies together and roll some dice. It doesn’t matter if you’re a hardened tournament player or someone that’s just starting out, this is your chance to influence what happens.

Do players of all factions have something to be excited about in this campaign?

Rob: As I mentioned earlier, we’ll be tracking the results of each faction and that could affect their future. We always watch the results of a campaign and things do change in the narrative or even in lists, depending upon what happens in the campaign. So, even if you think nothing has happened straight away, rest assured that we’ll be working away on something devious in the background.

The main thing is that everyone can be involved! Think of this like the climactic battle. The various armies have all marched to Halpi and are getting ready to fight it out.

Will the rules introduced in the campaign, such as the cool plane-specific spells and items, be integrated into future core rulebooks?

Rob: Good question! We always like to use this campaign supplements as a way to experiment with different ways to play. If the community reacts well to them, then we may introduce them in future editions of Clash of Kings. For example, in Edge of the Abyss we introduced the idea of formations, which were then included in a subsequent Clash of Kings.

We understand that due to the events of 2020, this campaign was postponed from its original start date last year. Has this allowed Mantic a chance to add anything to the event for 2021?

Rob: Not particularly, to be honest. However, we do hope that we’ll be able to run a campaign a year in the years ahead.

At the end of the campaign, will we get to see the statistics from around the world?

Why are Abyssal Dwarfs such a nuisance? Not only did they create the Ratkin and unleash the Nexus, but they also happen to be pretty tough on the tabletop! When will they get their comeuppance?

Rob: Ha! They are a bit of a bloody pain. They could get their comeuppance if something bad happens to them during the campaign. You’ll just have to wait and see. Hopefully they’ll all get enslaved by Ratkin, which would be some ironic justice. 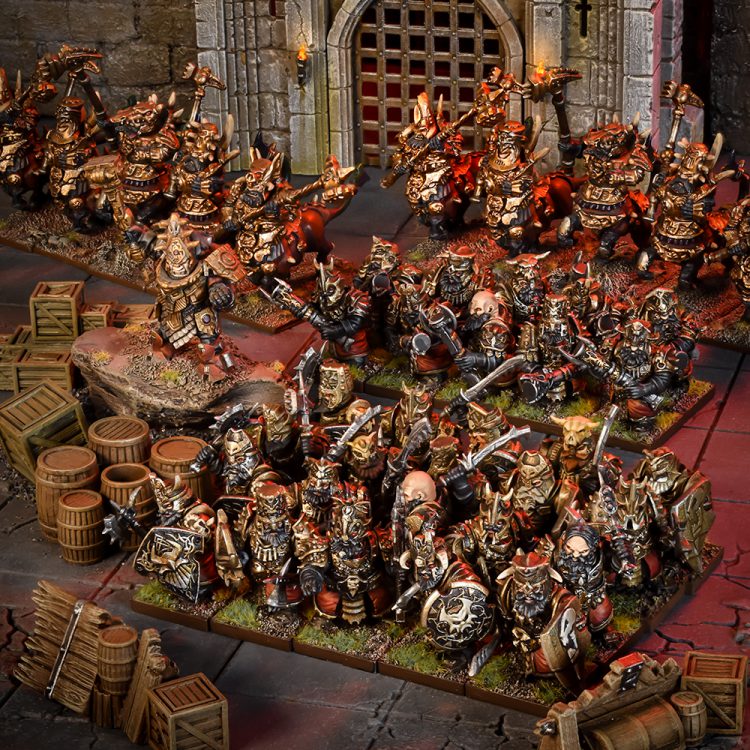 Abyssal Dwarfs – look at how smug they are. Credit Mantic Games.

Will the results of the campaign lead to long term narrative changes?

Will there be a novel or two in which these events are described?

Rob: Winged Hussar are always very receptive to novel ideas and if the campaign inspires someone, I’m sure that Winged Hussar would be interested to hear from them.

Will this campaign lead to new miniatures, such as those for the new heroes?

Rob: We have actually had a couple already. Twitch Keenear (Ratkin warlock) is a big part of the storyline, as is Grupp Longnail (Goblin wiz) who are both included in the War in the Holds two-player set. Personally I would love to see a Dravak Dalken miniature at some point but we’ll have to see if he survives the campaign first. 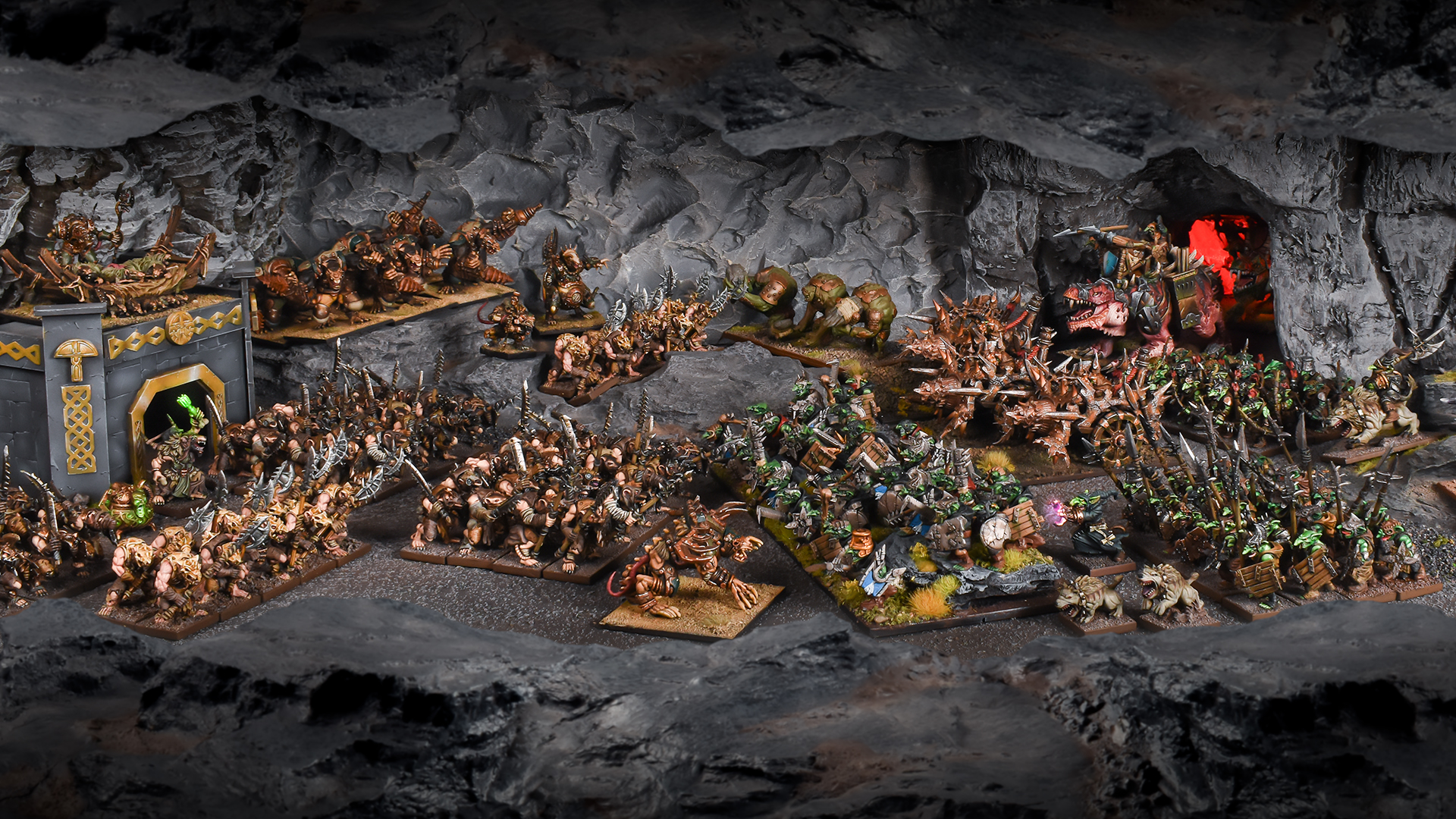 Twitch Keenear and Grupp Longnail clash in the caverns of the Halpi Mountains. Credit Mantic Games.

What else can we get excited about on the miniature front for Kings of War?

Rob: Plenty! We’re just about to release the Salamanders in July and then the Halflings are close behind in August. The reaction to both of these has been fantastic and we can’t wait for people to see them close up. They’re all spectacular. Then we might just have one more surprise up our sleeve for the end of the year…

That wraps up our discussion with Rob. We’d like to thank him again for speaking with us. Hopefully you’ve been following along with our articles and are well on your way to building up a force to take part in the event, and hopefully you’re as excited as we are. We know we’ll be joining in on the side of Evil. If you haven’t built an army yet, don’t freak out – you’ve still got time to get building and painting, and this campaign can be the inspiration to crack the whip; it definitely has been for us.

More details will be coming from Mantic as we get closer to August (like the website for result submissions). What this end-of-year reveal might be we can only guess, but chances are it will be associated with that silhouette shown in the Mantic Summer Preview. Will this be related to the campaign outcomes? Only time will tell.

If you liked this Q&A-style article, and you have some questions of your own, let us know and we can incorporate them into our next round of questions we submit (if Rob will let us!). Either drop a note in the comments below or email us at contact@goonhammer.com.