ANAmal.net’s Road to NoVA, part 1: How Do I Work This?

Hello friends. I’m ANAmal.net, or Greg, and if you know me (which, realistically, you don’t) it’s probably from PMing me with bug reports for ButtScribe, because it sucks and I keep breaking stuff.

I’ve never attended any 40k event more organized or competitive than “meetups at the nerd store”, and most of my gaming has been of the “getting drunk in a basement” variety, but I decided to go to NoVA this year, and play in the 40k GT. There’s two main reasons for this: one, I live an hour away, so why not, and two, TheChirurgeon cyber-bullied me into it.

I’ve been playing 40k on and off for a few editions now, but 8th has been by far the most active I’ve been in the hobby. It’s the best the game has ever been, I’m playing in a year-long campaign, and my painting has gotten to the lofty level of “workmanlike”, which is to say I don’t regularly get made fun of for how bad it is.

I’m also incredibly, indescribably, bad at 40k. And look, I know: everyone says that. But I’m going to level with you: those people are liars. I’ve got the real shit and I can prove it. Here are the results of every game of Warhammer 40,000 I have played, going back to the start of 2019. Witness:

This is less of a joke and more of a greek tragedy. The story of an army that murders its father and marries its mother, but then also the mother is into some powerfully kinky shit and they strangle each other because the army is so fuckin’ clumsy that it can’t tie the knots right. It’s a Russian novel’s worth of horrors. I’ve gotten dunked on, on air, by podcasts more times than I’ve won games, and that is, again, not an exaggeration. Reader, I am bad.

Pictured: 5000 points of Dark Angels that I’m not taking to NoVA.

My road to NoVA started with the Astradus Campaign, which TheChirurgeon has written about on this site a few times already We’re at about the end of round 2 of that campaign, and I’m currently tied for 3rd in games played, but tied for last with 0 campaign victory points – I should note here that two of the others have literally never logged a game, and ones that have, between them, total half the games played that I do. Again, very bad.

After being on the receiving end of so many merciless beatings, I realized the army needed help – losing every game is still funny to me, but I’m starting to worry that other players see it as a waste of time. Somehow, and I don’t understand this either, my strategy of “only painting stuff that looks cool, even if, and ESPECIALLY if, it sucks” and “only using things that are painted” wasn’t working. So, between the campaign and NoVA, I have a deadline, and I have a plan.

3: Toward a Working Theory of Gitting Gud

My first attempt at a NoVA list was to remain implacably On My Bullshit and bring 2000 points of DeathWing Terminators. Those aren’t really painted up to my current standard though, so the second list was Literally A Warhound. Third time around, I made the decision to not be a fucking idiot for once in my life, and actually listen when people gave me advice, instead of doing that thing where I agree and nod, then ignore them and do whatever it was I’d already decided to do in the first place.

Fortunately, every goon and non-goon I’ve talked to has been willing to help me out on this, and while no one has ever claimed that Dark Angels are on top of the meta, they’ve had some really good suggestions, and I’m grateful for it.

The new plan, then, in brief: No more small marines, except for Azrael. Buy a couple boxes of Intercessors, and finish my HellBlasters. Don’t buy Shadowspear, because I don’t want models that I can’t put the Dark Angel shoulder pads on. Run the flyers I have, maybe get a third one, and convert a regular Land Speeder into a TalonMaster. These are all good units, and look cool, and all I had to do to unlock them was get over my weird bullshit and actually try to win games. Nice! 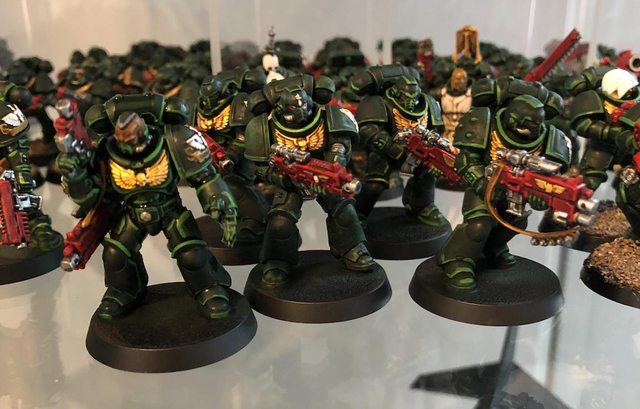 One of the many things I find I struggle with when working on lists is having a purpose for units, and thinking about how they’ll work on the table, so I’m trying A New Thing with this, which is, uhh, having a strategy. In this case, the plan is to put all the marines in a battle pile, covered by the overlapping hit/wound/4++ auras. They should survive their own plasma weaponry long enough to get murdered in close combat around turn 3, while the jets will overextend and get focus-fired off the table, and the inceptors whiff all their shots after deep-striking. I didn’t say it was a good plan, but I’m trying to be realistic here.

A very real issue with this list is CPs: the list only has 9. Azrael can regenerate them during the game, but this has never worked, on the rare occasion that I don’t forget about it entirely. I’m not about to do 30 intercessors, and I want to cancel my smallmars, so double-battalion is right out, but I’m going to have to think hard about getting an Outrider or Vanguard or Spearhead in there, and/or painting a third jet to get them into an air wing, to get at least a couple more. I typically use Weapons of the Dark Ages and Speed of the Raven a few times each, and I’ve come to rely on Intractable in lieu of getting good at positioning, so 9CP isn’t going to cut it when everyone else is rolling with 15-20.

4: Where do we go from here 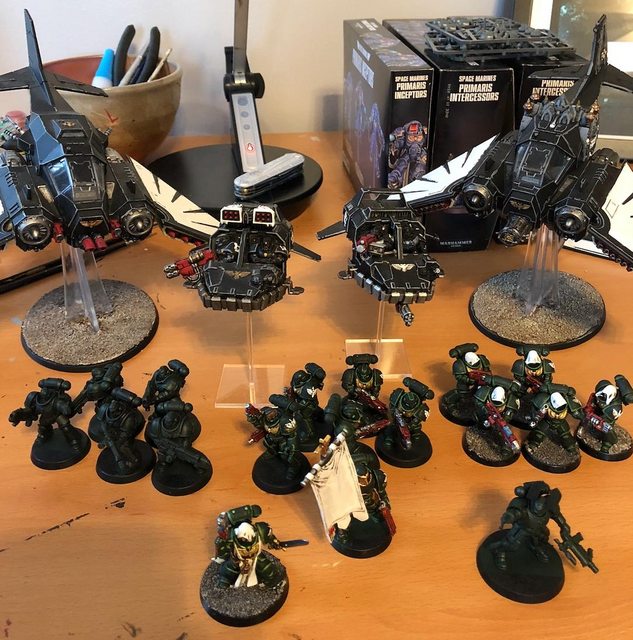 My NoVA army, as it existed last night before I painted that Phobos Captain, who actually isn’t even in the list. Wait, shit.

So that’s where I’m at right now – approaching a near-total reboot of my Dark Angels, my wonderful Mall Goth sons. I think I’ve set myself a reasonable hobby goal: painting 20-odd Bigmars across 15 weeks shouldn’t be that arduous, and there’s only a few other bits and bobs to worry about after that. My plans for the immediate future are to finish the 5 Hellblasters and 10 Intercessors that are the core of the army, and then re-visit things, and see what else I should add.

The fact is, I’m not all that good at painting, or list construction, or playing, and I’m ok with it. I’m never going to win any painting competitions (of the ten of us in the Road To NoVA series, I’d put myself at best 9th, and that includes the guy whose entire army is still sitting on sprues) or tournament trophies (see above for the murderer’s row that is my 40k W-L record). But that isn’t what I’m here for. I’m here to roll dice and nerd out, and buddy, I can’t wait to do both of those things for three solid days at NoVA this year. You can be bad at everything and still enjoy yourself, is what I’m saying.  This is also what I repeat to help myself sleep at night.

Hopefully it’s been helpful to get a look inside my rotten brain, but either way, this blog is over.