First, let’s look at progress. I made a condensed version of my army list, so I don’t have to print 10 copies of ButtScribe cards to hand out during games: 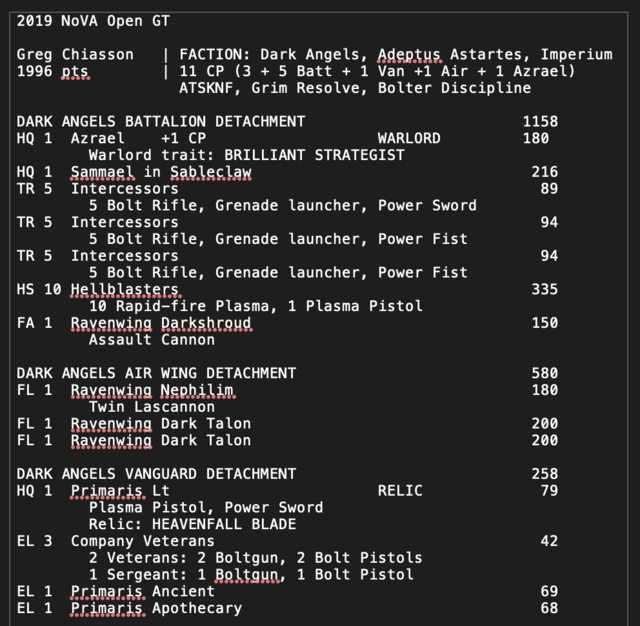 You may notice some changes from last time. You may also notice that those changes make it exactly the same as a possible list I floated way back in Part 1, and decided not to go with, because it was too much work. You can imagine how thrilled I am to be be going back to it now, at the last minute. We’ll come back to that later.

I bought and painted up a new (old) Azrael, since it was easier than emailing the NoVA organizers for permission to use my custom one. I don’t like metal models, but not nearly as much as I don’t like writing emails:

This is the less-good news. I got rocked by Wulfen in Stormwolves, 33-16.

My opponent, friend of the site SD47, was kind enough to help me out with a practice game, and I asked him to bring something harder than his usual lists – which he usually softballs because otherwise I get clobbered and no one has a good time – and he obliged. I managed to take out about 1500 points worth of his army, but only barely avoided being tabled, having a single Dark Talon with 5 wounds remaining at the end (I’m sure someone is going to come along shortly and tell me that doesn’t count). I did make him play it out, even though the game was functionally over before the start of turn 3, because I wanted to see how it went, trying to gut out a few consolation points in a losing effort.

Then, as you do, I spent the next two days getting windmill-dunked through the floor on two different Discord servers, culminating in TheChirurgeon mailing a Dark Talon to my house.
TheChirurgeon’s Note: Like 50% of the reason I mailed that jet to ANAmal.net was for the fun of making him sweat the painting deadline with the rest of us. Eat shit, buddy.

If there’s anything worse than giving up the maximum-NoVA-allowed amount of points while getting humiliated with your “new” and “improved” list, it is this: before embarking on my Dark Angels Improvement Project, I had yet to win a game with them in 8th Edition. Throughout the project, after hours of painting and list-craft, I still have yet to win a game, or even really come close – my best result remains a tie against The Sex Cannon where I had four models left and was en route to a tabling before Variable Game Length saved my ass. I mentioned ego death in an early installment of this series, but I had no idea at the time just how bad things were going to get.

This has been a lot to process, is what I mean, and Reader, I gotta say: It fucking sucks.

I guess I’ll paint this jet, then. It feels like a dick move not to, since he already bought the thing, and since we’re all on this god-forsaken road for just a little bit longer, there’s no point giving up now. All of my “practice” games with the old list are now retroactively a waste of time, but anyway, here’s an airplane:

And the actual final version of the army. For like the third time this month, I am declaring this shit done, only I fucking mean it this time:

6.4 Come To the Bottom Table in Next Six Games if U Want an Ass-Kicking

If you’re at NoVA, come say hello and tell me how bad I suck in person. I’d offer you a drink, since you’re going to need one if you’re with me in the Shame Bracket of win-path pairings, but I don’t drink on account of I got Brain Problems as regards moderation. If you see a guy playing Dark Angels, wearing a 40k BadCast shirt, and getting tabled, that’s probably me.

In all seriousness, I had fun doing these Road to NoVA posts, and as much as I’m a hopeless 40k hard case, I think this reboot is exactly what my Dark Angels needed. The convention itself is going to be a blast, and we’ll be back with a follow-up post afterwards, where you get to hear about me going 0-6 and becoming the anti-Corrode.

Listen up, because this is important: I bought two BadCast BadShirts, in two different colors, so I could wear one both days without it looking like I just re-wore the same shirt. This is more thought than I put into my entire army.

I am so fucked.