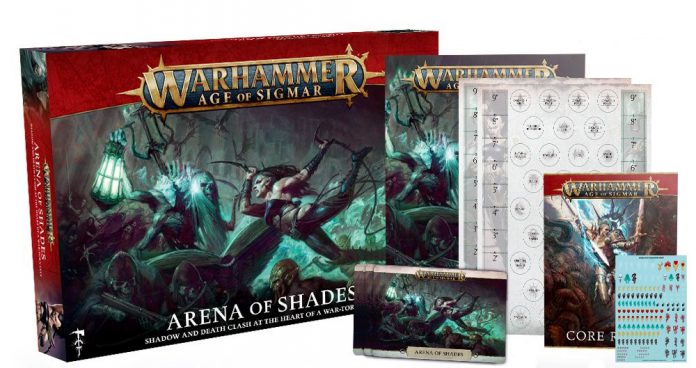 Goonhammer was given a free copy of Arena of Shades by Games Workshop for review purposes.

Arena of Shades goes on pre-order today, with a new Hero for Daughters of Khaine and a new Hero and and unit for Nighthaunt, along with points change. While we can’t confirm these will be final for the upcoming battletome, it’s worth exploring what these could mean for the factions.

We already covered the Nighthaunt, so next we’re going to address the second half of the box. Comparatively, Daughters of Khaine got fewer units with only 4 to their name: Sisters of Slaughter, Doomfire Warlocks, Khinerai Heartrenders and the brand new High Gladiatrix. Unfortunately, the box did not contain the Warscrolls for the alternate builds of the units (Witch Aelves, Dark Riders and Khinerai Lifetakers) even though they are on the sprues, so we must merely speculate what changes might be coming for them. Additionally, none of the existing models got points changes.

I’m going to get these out of the way early because literally nothing has changed at all. For Sisters of Slaughter, this is a fair decision as they were already pretty good. Sisters are a popular alternative to Witch Aelves, usually added as a 10 woman squad alongside a big blob of Witch Aelves. They can’t quite match the damage output of a squad of dual knife wielding Witch Aelves but they do the job of hampering enemy movement with a 6″ pile-in. Sadly this box doesn’t include warscroll cards of Witch Aelves so it’s hard to say if that’s been balanced out.

Doomfire Warlocks probably could have used a bit of tweaking, however. The idea of a mobile unit of wizards certainly fills a niche, but when you have Morathi why would you need more? Their warscroll spell, Doomfire, isn’t terrible. It scales up to enemy units and does its fair share of damage but doesn’t have a ton else going on. They are sometimes taken as an “extra pick” once you get your mandatory units out of the way, though I imagine most will stick to Khinerai Heartrenders or Khainite Shadowstalkers for deep-strike potential.

This is where things at least start to get interesting. Khinerai Heartrenders are very popular, they’re cheap deep strike fodder you can drop into the enemy back lines, shoot and charge in to keep them tied up for a turn, or steal a point your opponent foolishly left unguarded. Because they tended to be dropped in outside of your buff range they’re usually more of a nuisance than an actual threat.

Games Workshop seemed to take issue with them being disposable chaff and gave them a little nudge up as a treat. Now they rock a 5+ save, which they technically did get from their shields but now as a flat save rather than a bonus that can free your up to boost their defense a bit so they might survive a turn. Sadly they did lose the mortal wounds on 6s.

The rest of their abilities got shuffled around a bit, they still get extra rend when dropped in, and can run and shoot. Instead of a 4+ to fire and move they can just do that now, no roll required. This will likely make them even more aggressive to drop in, shoot, move up and make a 3″ charge to try and lock down anything they can for a turn.

The star of the show and the actually new model, she’s got a lot going on. With a 5+ save and 6 wounds, she is fragile like many DoK models, but only before you support them with proper defensive buffs.

As befits her position, she integrates well with Sisters of Slaughter and Witch Aelves. All friendly Witch Aelves and Sisters of Slaughter wholly within 12″ of her become 3+ to wound and their rend changes to -1. The wording here is key, because she actually modifies the wound characteristic to a new value rather than adding a +1 to the roll, which means +1 to the roll can still be added from another source. Witch Aelves already get a +1 to Wound for being within range of a Hero, it’s hard to say if they will remove that as a warscroll was not included in the box, but for now 2+ to wound is pretty gnarly!

She’s not bad in combat either, a total of 6 3+/3+, Rend -1 Damage 1 Attacks, a 6″ pile-in borrowed from her Sisters of Slaughter minions and the Killing Stroke ability that was previewed on Warhammer Community. You roll a D3 at the end of combat and if you can meet or beat their wound score they die, otherwise it does nothing. It’s free to use and if you’ve ever fallen frustratingly short of killing a Hero, this will save your bacon.

Overally I think this lady is going to be very popular. At only 100 points she’s very easy to slip into a list and most Daughters of Khaine lists will include a 30 girl blob of Witch Aelves, or at least a few 10 woman units of Witch Aelves or Sisters of Slaughter to pad out the battleline. Her benefit to a large group of either unit far outweighs her cost for a unit you were taking anyway.

Overall, there’s a lot less going on than the Nighthaunt side. Half the units weren’t changed at all, but the changes to Heartrenders make them a touch more effective. The actually new model, the Gladiatrix, is exciting indeed. I think it will see a lot of play with the Daughters moving forward, and it won’t be long until their codex comes up!