Finishing your own army is core to the Warhammer 40,000 hobby. In our Army Showcase series, Goonhammer contributors take a look at the armies we’ve been collecting for years, and the new ones we’ve just finished – what drew us to them, why we keep building and painting, and how they play on the table. For our first installment, here’s Greg (“ANAmal.net”) with his Dark Angels.

The player: ANAmal.net
The codex: Dark Angels
Points: About 6,000
Collecting since: 6th edition

I first got into 40k back in 5th edition, and after a few fits (a box of Cadians) and false starts (a few Tau models), I eventually settled on Space Marines. Dark Angels, specifically, because I loved the concept of an all-Terminator army. I started collecting them after playing the first Dawn of War, so I decided to paint my models as Blood Ravens. I eventually gave that small army away to a goon who was just breaking into the game, and I picked up a bunch of Orks, which I also gave away to a friend who was just getting into 40k.

I think it’s important to forget things. Delete your social media accounts, and throw stuff away, especially the sentimental items, periodically. Keep moving forward, but leave no wake as you pass through the world, to hasten the point at which no one remembers you were ever there. Anyway, here’s some Dark Angels.

The core of my proper Dark Angels army started in 6th edition, with Dark Vengeance. Dark Angels didn’t, and still don’t, have a Start Collecting box, but they did feature in the 6th and 7th edition starter kits. Two sets of that provided my tactical squads, an Azrael stand-in, a wizard, bikes, and enough Terminators to run a normal squad and with some conversion work, Deathwing Knights. I decided early on that I was only going to add models to this army that were sufficiently Dark Angel-y, which means I’ve spent a small fortune on upgrade sprues over the years and straight up threw away a box of older models when I began to doubt their commitment to the Unforgiven.

One of the things I really liked about the Dark Angels is that visually, you get three armies in one. I love the variety of bone Terminators, black jets and bikes, and a core of dark green infantry. Still, to avoid looking like a crusade of randos, I tried to tie them all together with the secondary colors to maintain some coherency. For example, the weapons across all the sub-armies use the same reds, the Deathwing robes use the same green as the power armor troops, and the recipes for the metallics all carry over across the range. The emphasis on plasma weapons didn’t hurt either, though I would like to see GW draw units from the Spooky Archaeotech Vaults of the chapter more.

Remember the Deathwing knights? Well, the other bits from the that kit went onto Dark Vengeance bodies to form a Command Squad, which no longer exists, so they’re used as an Apothecary, Ancient, Champion, and 2 regular dudes now. All told, it’s about 2,000 points of Deathwing. This includes the only two metal models in the entire army – the stone-cold classic Terminator Chaplain, and an old chainfist Terminator, who I painted up and added to the army after he was the sole survivor out of about 25 guys that hammered TheChirurgeon’s Warhound to death in our first Apocalypse game.
TheChirurgeon’s Note: I fuckin hate that stupid asshole Chainfist guy 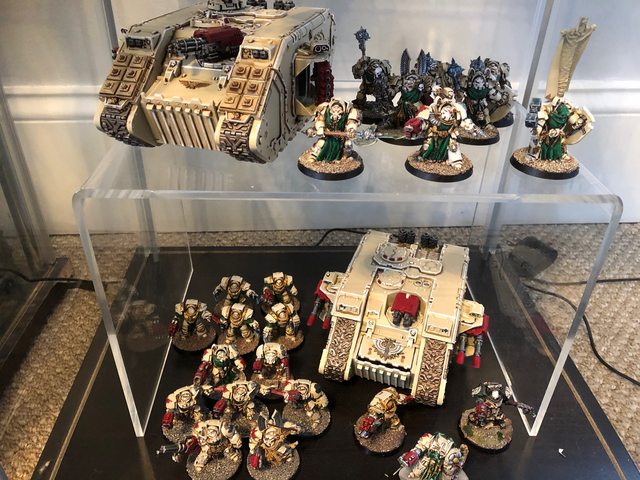 I also picked up a Betrayal at Calth set and some other random kits a while back, and used those models to bulk out my power armor marines. The assault squad are Mk4 bodies with Mk7 jump packs, plus various bits I pulled out of the box. I’m extremely happy with the way those models came out, and it sucks that they haven’t been worth using in a game for years now. Also included here are some dreadnoughts, transports, characters, etc. There aren’t any real conversions in the army to write home about, but I did some minor reposing on the plastic Contemptor Dreadnought and stuck on a few icons on it to punch it up. That’s about as far as I go with modeling, I suppose – some kitbashed limb swapping, making heavy use of Dark Angel bits, maybe a repose here and there, that sort of thing. I don’t do green stuff and there’s vanishingly little Forge World in here. 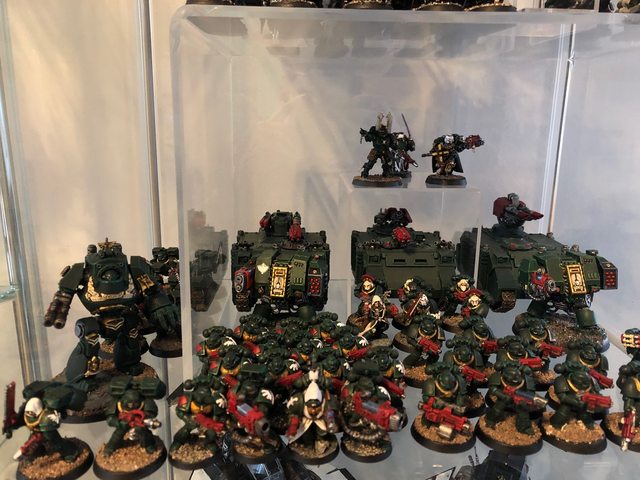 I’ve been pretty slack with the Ravenwing elements of the army, despite them being good, because I hate painting bikes. I do have a couple of jets, which were a present/own from TheChirurgeon (I assume this was payback for making him build and paint a Titan), and Land Speeders, but I will never convince myself to paint the other 15 bikes I have. There’s a Darkshroud too, I guess, but that’s on the painting table, not in the cabinet. I hate that model, though I tried to convert away some of the more troublesome bits of it. These are some of the older models in the army, along with the tactical marines, but I still think the Cyclone launcher looks sharp on top of a speeder, and it doesn’t fall off all the time like the metal one does. Again, with the emphasis on melta over plasma (which is rare, usually I go whole-hog on plasma guns), you can tell these were for a past edition. 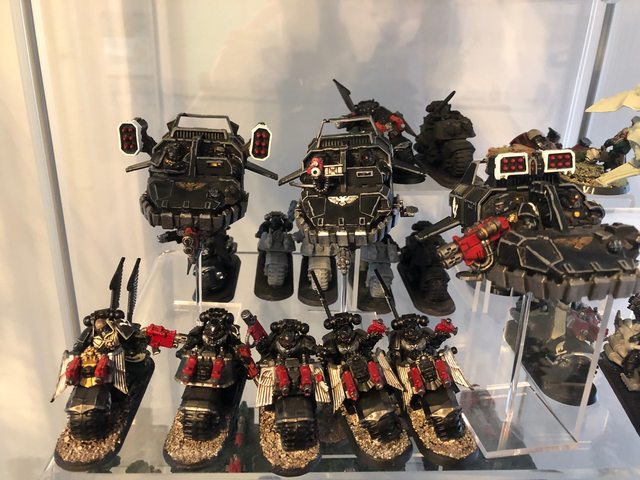 The major part of the army I actually use these days is the 2000 points of mostly Primaris marines and Ravenwing that I’ve been calling the NoVA Corps, a joke that I keep making but never seems to land. I like Primarises! I do not like that the various Phobos models from Shadowspear haven’t gotten multi-part releases that I can put Dark Angels upgrades on, and I don’t want the other Chaos half of the box, so I haven’t picked that up. These guys have all gotten the 5th company heraldry on their kneepads, which is something I haven’t historically done, but I think adds a lot to the presentation. They also need to be based, now that they’re all painted, but that’s not stopped me from playing them. I have severe brain worms about not playing with unpainted models, but for some reason it doesn’t apply to basing.

On the table top, these guys have been a fucking disaster for me. There are reasons for this. For one, up until about a year ago, every game of 40k I played I was drunk off my ass for at least part of it. For another, I built large portions of the army in 6th and 7th edition. They weren’t good then, but the switch to 8th, which I think is an amazing improvement for the game, did them no favors. It’s only been recently that my Road to NoVA pushed me into Primaris marines, and I’ve seen some better results, which in my case means getting tabled in 5 turns instead of 3.

So that’s the main idea of this thing, an entire Detolf full of Bad Marines, most of which are just taking up space. Currently, the army clocks in, not counting supporting elements like my Knight, or Vindicare Assassin, or Warhound Titan, at right around 6,000 points. I don’t count unpainted models, but if I did, it would probably be over 7,000. I’ve been stockpiling bits for a fever-dream project of a Fallen detachment, but so far all I have for them is an assembled, unprimed Cypher. 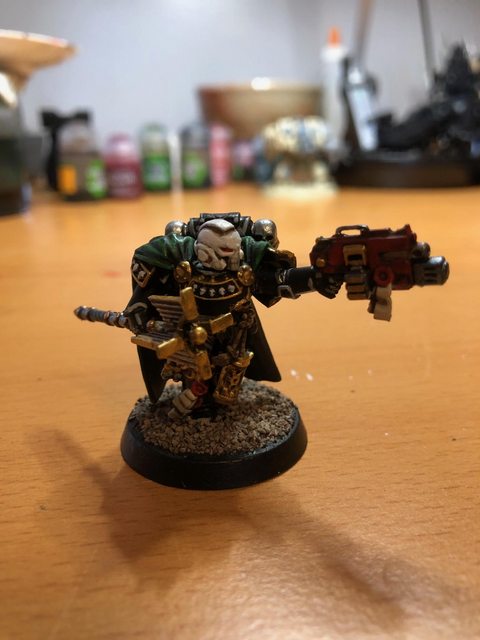 My Astradus Warmaster, Interrogator-Chaplain Barbatos. He’s based on the Dark Apostle or whatever from Betrayal at Calth, with a Reiver head and an arm swap to add a combi-plasma. He’s not a great unit, and has died literally every time I’ve fielded him, after hurting himself more through plasma overheats than he did damage to the enemy, but I do like how the model came out. 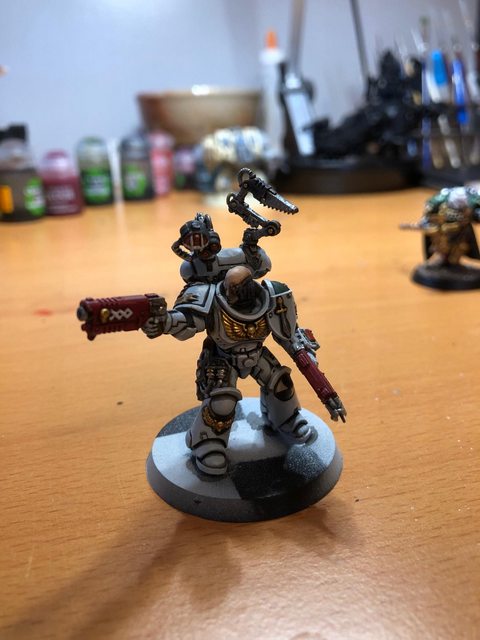 Another light kitbash, my Primaris Apothecary uses a torso, arm, and leg from an Intercessor box. I mostly dig this one because he’s one of the most recent models I’ve done. I’m setting myself up to get viciously dunked on here, but I’m proud of the paint job. Also I love that he’s dual-wielding tactical medication pistols. 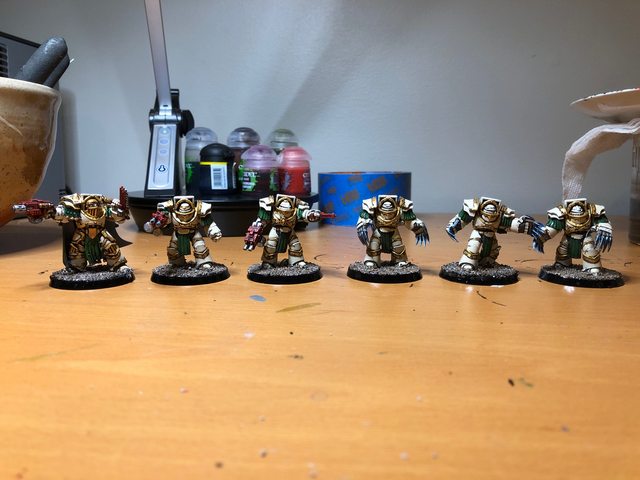 A unit of Cataphractii Terminators and a Terminator Master (Captain, for Codex-having chapters), continuing my bullshit of putting maximum effort into painting models that are trash on the tabletop (in fairness, I put the lightning claws on them before the Bolter Discipline changes that made shooty Terminators better). These are those same Calth guys from a while ago, but I only painted them recently. They were my first models after I dumped all my gummed-up Citadel paint pots and treated myself to the Vallejo Game Color suitcase, which was a huge step forward for my trash painting standards. Neither of these units have ever seen play, but I think they look sharp.

In terms of next steps with the army, honestly, I need a break from it. They aren’t getting given away anytime soon, but they suck to play, and I’ve painted so many Dark Angels by now that I want to pick up another army, or at least a Kill Team, as a palate cleanser.

But before I can do that, I have a Chaplain Dreadnought in progress, as an “upgrade” for the incredibly useless Barbatos, and some basing that needs to be done. Past that, I’d like to paint Sammeal’s jetbike – it remains, after years and edition changes, one of my very favorite models in the entire 40k range. I may Contrast up the rest of the bikes just to get them done, but that sounds like a chore, and I already have enough of those. Of course, there are always new Primaris Lieutenant releases on the horizon, so while I’m tentatively calling them “done” now, I suspect I’ll be returning to the Dark Angels, my largest and dearest 40k army, before too long.

Editor’s Note: If you want to follow along with future developments on ANAmal.net’s Dark Angels, check out his Road to NoVA, which updates every couple of weeks. You can read the prior episodes here: