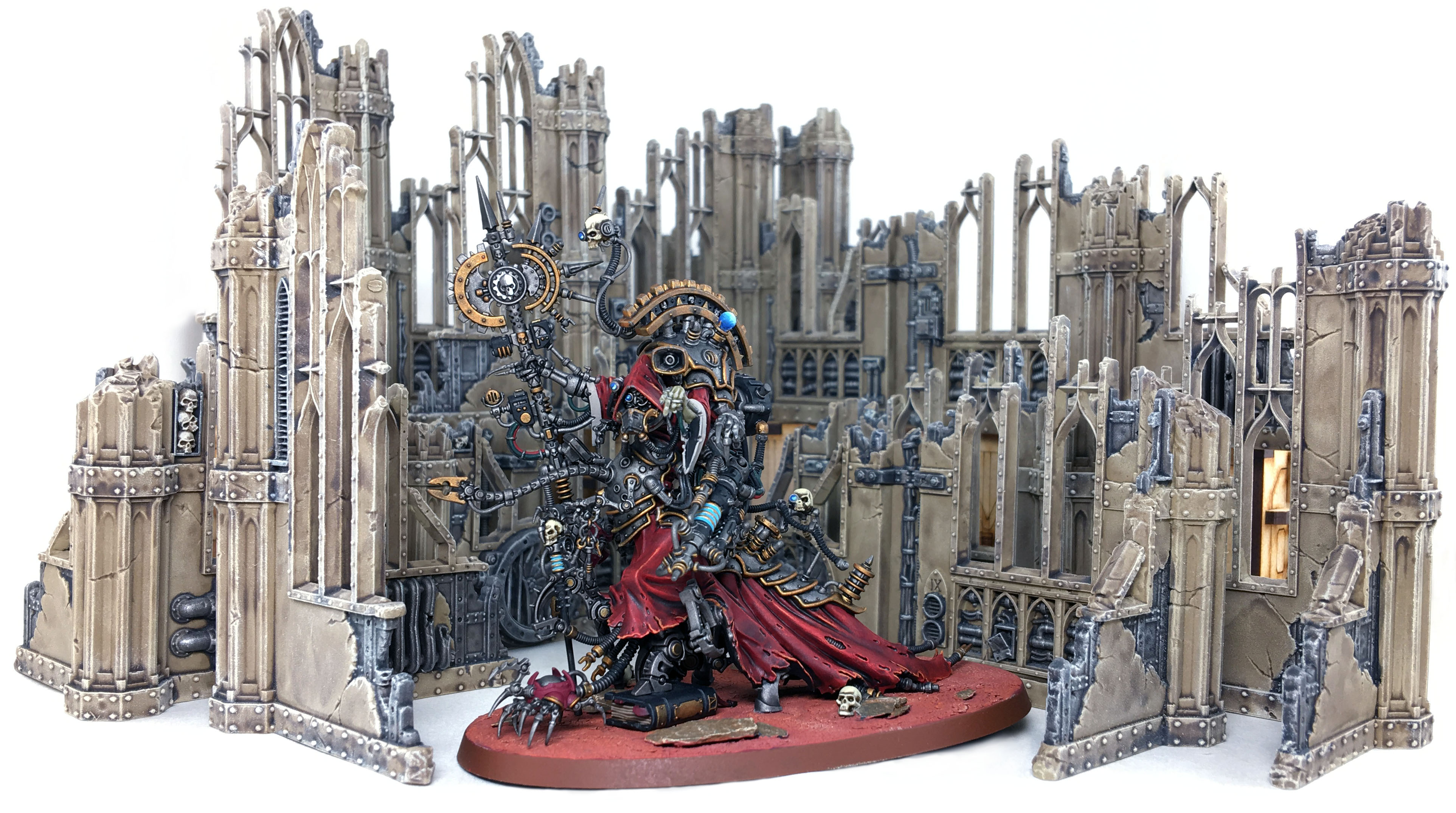 Finishing your own army is core to the Warhammer 40,000 hobby. Every Thursday in our Army Showcase series, Goonhammer contributors take a look at the armies we’ve been collecting for years, and the new ones we’ve just finished – what drew us to them, why we keep building and painting, and how they play on the table. This week Andrew is talking about his beautiful Adeptus Mechanicus!

The Painter: Andrew Haywood
The Codex: Adeptus Mechanicus
Points: About 2400
Collecting Since: March 2018
Instagram: bobbyanything
I also post under the usernames Duct Tape or Pendulin depending on the site/forum/phase of the moon.

I find it interesting how so many people in this hobby have been a part of it for so long. “I started collecting back in the Rogue Trader era,” or “my brother and I got in trouble playing Warhammer during recess,” or “I screamed ‘For Cadia!’ as I came out of the womb.” I’ve got none of that. I unboxed my first ham only a year and a half ago.

Let’s travel back to a simpler time: early 2018. Young Andrew, wide-eyed and full of wonder, was flipping through Games Workshop’s site, looking at all their nifty models. Knowing nothing about the rules, lore, or factions, I was struck by how many options I had in front of me. I browsed the site at the urging of a friend who recently got into Warhammer with his Necron army. I didn’t want to copy him, so the only option I ruled out were those metal skeletons. Having since learned about Necrons’ place in the meta, I am only too glad my friend bit that bullet for me.

I browsed model after model, until I came across the one. Once I found it, I knew that it would be the capstone to my army. No matter what it’s rules or lore was, I needed to build it, I needed to paint it, and I just needed it. From there, the rest of my first shopping cart filled itself, and a week later it was in my hand. The one, the only:

Before we get to my army, let’s take a minute to talk about Cawl. Have you seen this model? Have you? If you don’t own it, take another look. Cawl’s too busy to reload his own gun, so he built an arm to do it for him. He has a floating skull whose sole job is to run cables along his mechano-spider cloak train. He has a skull-topped electric pimp-cane and you could miss noticing it entirely with how much crazy cool stuff is going on in this model.

Unfortunately, you can’t have an army of just Belisarius Cawls, so I had to flesh it out a bit. A pair of Start Collecting Skitarii boxes and some Kastelan Robots got me on the way. It wasn’t long before I had a little bit of everything the faction has to offer.

I’m now sitting at around 2400 points of Admech, with over a quarter of those points coming from six Kastelan Robots. Initially, I hated the robots. That goofy face on top of a 60’s era lumpy body just didn’t resonate with me. Fortunately, I found some third-party heads and pauldrons which completely changed my opinion on the model. With an upper body closer to the Castellax Automata, they’re now among my favorites. I’ve not yet played a game with all six of them on the battlefield, but I’m looking forward to the first time I declare the target of my shots and reach for one hundred and eight (108) dice. Given that they’ll be parked next to Cawl and rerolling any hit rolls I don’t like, I expect that single salvo to take a solid five minutes to resolve, and for there to be naught but a smoking crater where their target once stood once they’re finished.

I’m also running a trio of Sydonian Dragoons/Ironstrider Ballistarii for the fast attack slot. They are another of my favorites in the Admech faction, with their only downside being that you need a second mortgage to afford them. Now, I know what you’re thinking, “But Andrew, the Dragoon and Ballistarii are built using completely different weapons!” So let’s talk about magnets.

I magnetize my minis to a degree that’s frankly ridiculous. I never quite know what the best combination of bits is, so I just build and magnetize everything. Not just weapons, I’m talking about magnetizing my Skitarii’s heads so that I can swap them around to make my units each have matching headgear. Those Dragoons/Ballistarii? Fifteen magnets each.

To round everything off, I’ve got an assortment of Skitarii, Priests, Datasmiths, Servitors, and Sicarians. Or, as I like to call them, cannon fodder.

I have three main goals for my army going forward, the first is to reach capacity for the different models available, the second is to have the makings of a strong competitive list, and the third is to catch ’em all.

By “reach capacity” I mean own the practical maximum amount of an individual model. For example, once I hit three Dunecrawlers, the Rule of Three would prevent me from ever fielding a fourth, so building my final Dunecrawler is on my todo list. For Kastelan Robots, I recently achieved this by building my fifth and sixth robots just a couple months back. Other than Dunecrawlers, I’m still working on reaching capacity with Priests, Sicarians, and Skitarii .

For a competitive army, I don’t mean a tournament winning one. I mean simply that I have an army which best plays to its strengths. Right now the trend for this seems to be Kataphron spam with plenty of Dragoons for screening. These are two models which I’d like to double or triple the number I have, but each time I think about picking up another box, I think about the ridiculous number of magnets I need, and instead work on something else in the backlog.

And lastly, I gotta catch ’em all. I really love the Ad Mech’s aesthetic, lore, and mechanics, so each time a new model is released I’d like to snag it even if it doesn’t really fit with how I’m building the army. This means I have a Tech-Priest Manipulus and Skorpius in the backlog. In theory I might slow down buying each and every Ad Mech Roboboi that comes out; however, since I started down this path, Games Workshop has only released two new models, so I don’t think it’s too likely to be a runaway issue.

There’s quite a few models which I’m particularly proud of. My Kataphron Destroyer/Breacher is currently featured on Games Workshop’s store page for the model, and I couldn’t be happier about it.

Can’t have an Admech army without a Tech-Priest Dominus. Those 1s to hit aren’t going to reroll themselves (except for all the other ways Ad Mech has of granting that same buff).

Despite the Cybernetica Datasmith being absolutely awful rules-wise, I think it’s one of the better looking models in the entire Ad Mech lineup.

I built Electro-Priests mainly for Kill Team, but I really want to see what I can do with a couple units of Fulgurites or Corpuscarii.

The only placeholder I have in my army is that I use the Forge World Servo-Automata instead of Games Workshop Servitors. Even if GW’s Servitor model wasn’t hilariously silly, the Forge World one is just so amazingly cool that I’d use it anyway.

I got these five Sicarian Infiltrators (and still plan to get another five) when I learned you could deep strike them in, pop Wrath of Mars and Protector Doctrina Imperative, and deal an average of 7 mortal wounds to their Warlord if it’s left exposed.

And last, but not least, we have the humble Tech-Priest Enginseer. A staple in any Admech list.

And that’s the full tour of my Adeptus Mechanicus army. The next projects on my to-do list are Imperial Knights, Tyranids, and Custodes, each of which I have at least a couple models already finished and ready to go. I’ve also got a Grey Knights Kill Team, but I’m not looking to expand that to a full 40k Army as I generally like having a chance to win.