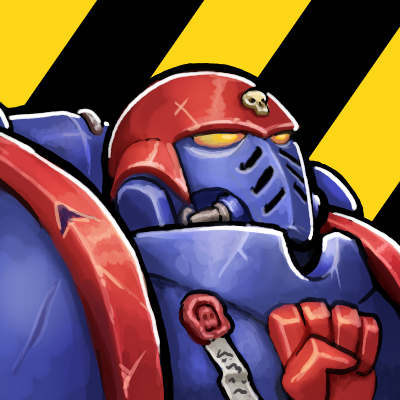 Finishing your own army is core to the Warhammer 40,000 hobby. In our Army Showcase series, Goonhammer contributors take a look at the armies we’ve been collecting for years, and the new ones we’ve just finished – what drew us to them, why we keep building and painting, and how they play on the table. This week Liam is talking about his Crimson Fists!

A young Corrode got into Warhammer roughly around the age of 10, and of course he was immediately attracted to the coolest Space Marine Chapter – the Blood Angels.

Yeah, so, as a kid I thought Blood Angels were the coolest thing in the world – they were bright red, and they had their own separate Codex with cool unique units! They were the Chapter that liked to run up and punch things! They were cool space vampires! Their scheme was also a complete nightmare to paint in the year 2000 especially when you have no idea what you’re doing! After several years of painting Blood Angels very badly (along with a motley mix of other armies, none of which got to the stage of being playable) I cooled on the hobby and went and did other things, principally playing World of Warcraft very intensively. I logged in to check my /played recently and it was a number I do not feel comfortable disclosing at this time. Thank you for your understanding.

Around the time I started uni I started cooling off on WoW, and Warhammer bubbled back into my mind. I was living in Manchester and the Arndale Centre Games Workshop was easy to get to, and one thing led to another and I’d bought some models again. To begin with, I was painting some Orks, which was the last army I’d messed around with at the end of 3rd edition before losing interest in 40k, but I quickly came back to wanting to paint some Space Marines. I didn’t especially want to do Blood Angels again, but the Imperial Fists were calling to me – Dorn gets a lot of negative press as a primarch, but his rigid sense of duty appealed to me, and the scheme is fantastic. Unfortunately, much like my youthful Blood Angels, I wasn’t much cop at actually painting it. After a few frustrating attempts at getting a yellow that wasn’t absolutely awful, I gave up – but luckily there was a solution at hand, the other sons of Dorn, the Crimson Fists. Blue was a colour I could actually paint!

As the above picture probably indicates, this ended up being a fruitful course. I played a ton of 5th edition 40k, and my Marines grew and grew. The vast majority of the small Marines in the picture were painted in 5th – the big block of Tactical/Assault/Devastator Marines on the right, the Predators and Vindicators, all the Rhino chassis (including the three pressed into service as Whirlwinds), all the Terminators, including some which are now illegally assembled since they were built to play with the old 4th ed Dark Angels codex as pseudo-Deathwing, all the bikes (including, again, now Legends-ed bike Command Squad), most of the Dreadnoughts, all the Land Speeders. A lot of stuff, basically. It was all on resin bases too, which seemed like a good idea at the time. This was my core army for the whole of 5th, although I also picked up Imperial Guard and Dark Eldar, and messed around with some new Blood Angels, too.

I took a second gaming hibernation and missed most of 6th/7th, which I understand to be a good decision, before coming back again for 8th edition and the scary new world of Primaris Space Marines. With my gigantic pile of old Marines I was pretty weirded out by the idea of them being sunsetted, but I’ll be honest – I’m a much better painter now than I was then, and some of my oldest Marines look really rough. Part of me will be very glad to just leave them in the foam as a neat little relic of when they were worth having on the table, and drag them out once in a while to set up for a giant photo like this.

Marines weren’t great for most of 8th edition (please ignore the last 9 months), but they were cool and they kept getting new toys and I kept buying and building and painting them anyway, because Space Marines are cool and Crimson Fists are the first army I really managed to take from “buying a few models” to “a complete thing I can put on the table painted to an ok standard” and they’ll live in my heart eternally on that basis. Obviously all the Primaris stuff is an 8th edition add-on, as are the Forge World Dreadnoughts and the big pile of Centurions in the middle there. The paint scheme has evolved a bit with new paints and better techniques, and I also gave up on the resin bases – for one thing I can’t remember who manufactured them, and also I found them kind of annoying.

Well, you’ve probably seen that awesome new Indomitus box, and you’d best believe I’ll be getting one and painting it in the old blue and red. Beyond that, the main goal here is to fill out the options that are left for me to cover – chiefly fliers, but also some Impulsors, another couple of Repulsor Executioners, basically just filling in all the gaps so that I can eventually pull out any Marine unit I please. I should also probably rebase everything to be on 32mm, but that’s a big chore when I have stuff like “a pile of 100 Tactical Marines I’m never going to use all of” and I will probably only bother to do it as and when there’s a reason to.

Here’s some pictures, first up a big gallery from laying them all out in my garage the other day:

And some individual photos: