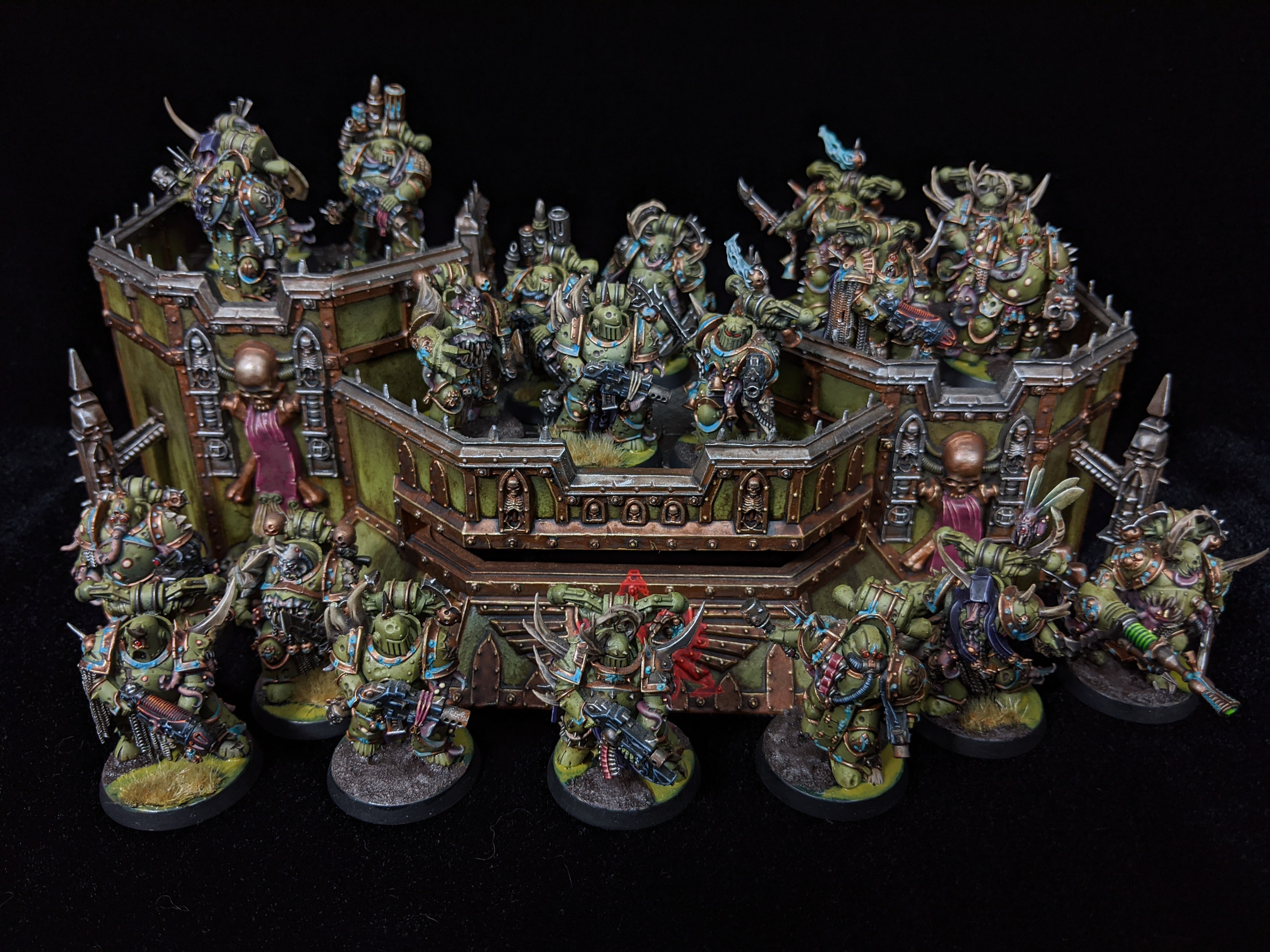 Finishing your own army is core to the Warhammer 40,000 hobby. In our Army Showcase series, Goonhammer contributors take a look at the armies we’ve been collecting for years, and the new ones we’ve just finished – what drew us to them, why we keep building and painting, and how they play on the table. This week Gerald Miller is talking about his Chaos Undivided

How did I get into Warhammer 40,000 you might ask? I’m afraid dragons are to blame. No really, Dungeons too. Now that I have asserted dominance via my dad joke; I can tell you how I got into citadel miniatures.  I was trying to fill the ranks of the orc army I’d been building for an AD&D campaign setting as a teenager.  I didn’t have a ton of cash and getting ten orcs for like fifteen dollars was insane.  Not only because they were reasonably priced, but because you could pose them too! I was hooked. I later found out about the game systems that went with these amazing miniatures and the magazines that accompanied them.  I bought the Angels of Death codex, rule book, and one box of Death Company.  I then NEVER PLAYED. What can I say; my community was terrible.  I put table-top aside and didn’t pick it back up (dig it out of a dusty shame box) until 7th Edition.

With the computer.com era firmly in the rear-view mirror and becoming a Dad freshly notched into my belt; I was looking for something that I could put down and pick up at a whims notice.  I was still playing AD&D plenty and had been painting very casually. I started to shift my focus away from world building to the painting aspect of the hobby.  It was fun, difficult, engaging, and downright easy to pause-mode.  As a side effect of not being the GM I needed a game system that demanded more than one miniature every few months got done; and this is where Warhammer 40k really started to get some appeal.

So…you all know those guys who love the game in theory, but have VERY LITTLE exposure to real game play? Yeah, that was me for quite some time. Pretty much the entirety of 7th Edition was spent living this life. It was a combination of having kiddos and a demanding job that really kept me from hitting the tables in any real sense. Although my interest in the hobby aspect of the game had grown and grown, becoming a good general never seemed all that important to me.  I had come to an interesting place in my journey with Games Workshop.  I loved their product, but it was painting that kept me buying my army.  In light of this realization I decided that I wanted to start collecting Games Workshop miniatures purely for the sake of painting competitively.

This brings us to 2010.  Essentially, I had been collecting Warhammer for about six years, and had little to no table experience.  I pushed trying to get better at the game aside and started buying random models for interest.  Honestly, when you are looking at models for competition there are really only two ways to view a model.  Either the model is incredibly detailed, giving you the opportunity to get lost in the sculptor’s work. Or the model is sparse, leaving you room to interpret the model in your own way.  I’m certain you can imagine which is easier to paint for competition when you are new to the competitive painting scene.  This is how I ended up falling in love with Nurgle models.

I started local at first and managed to win quite a few little painting competitions all around Southern California, 2013 was my year though. I won Orccon, Gamex, and Gateway in multiple categories including best in show. After that I started running their “paint and take” in following conventions and teaching. That year was also the year I ended up attending the last North American Games Day for seven years.  I finished in the finals for multiple categories and was featured in Games Workshops current iteration of White Dwarf.  It was a good year, The next two sucked though. Long story short, we ended up moving to North Dakota and starting over.  The good thing about that though was the very active and engaging community playing 40k in the state. 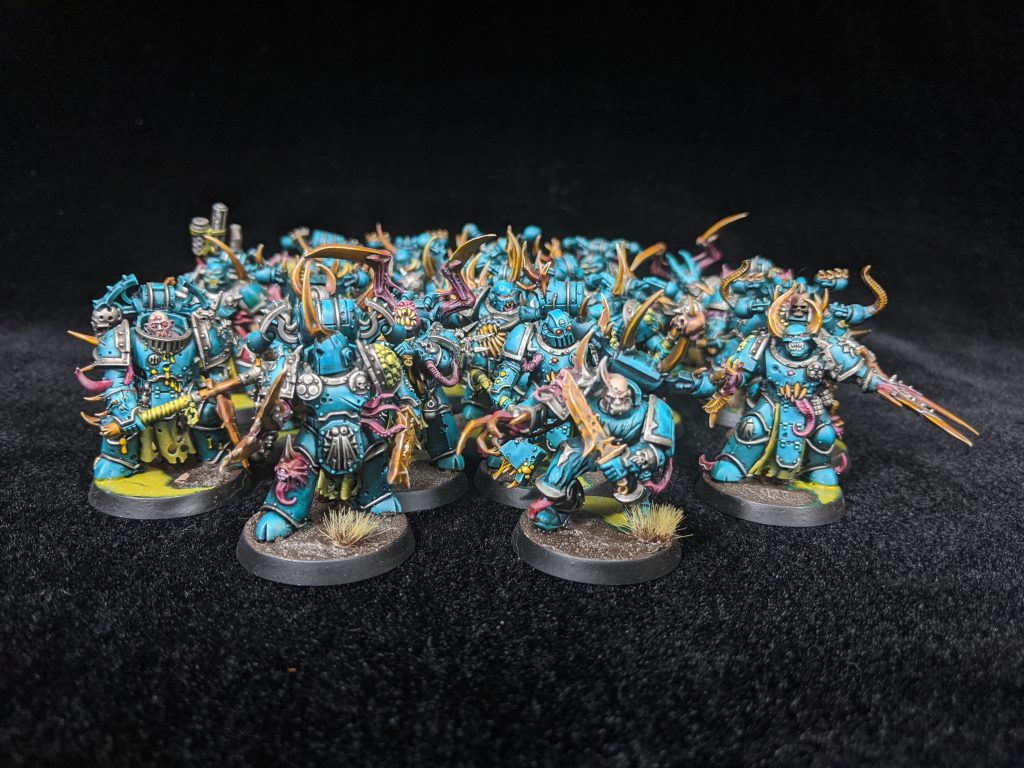 So here I am in North Dakota surrounded by some of the most enthusiastic players in the Midwest.  I had Blood Angels and Space Marines, and absolutely no desire to play either of them. (Sorry Loyalists) Then Death Guard came out.  I was in hog heaven. I had never forgotten about my love affair with the incredibly detailed and intricate Nurgle models from my competitive painting stint.  They grinned at me from my painting cabinet. “Give us Brothers”, they said, Now I was interested, Truly interested in these new and revoltingly beautiful models.

What could I do? Sell everything I owned and collect Nurgle sounded about right.  I had given my soul to this dark force of nature without my even knowing it.  Like an oblivious obsession I wanted everything. The Lord of Foul Putrescence had his grubby little hooks in me and there was no getting them out.  It just kept coming, they just kept releasing new stuff.  The joy I got from painting these bad boys totally stayed with me while playing them on the table, and suddenly I wanted to get better at playing the game too. 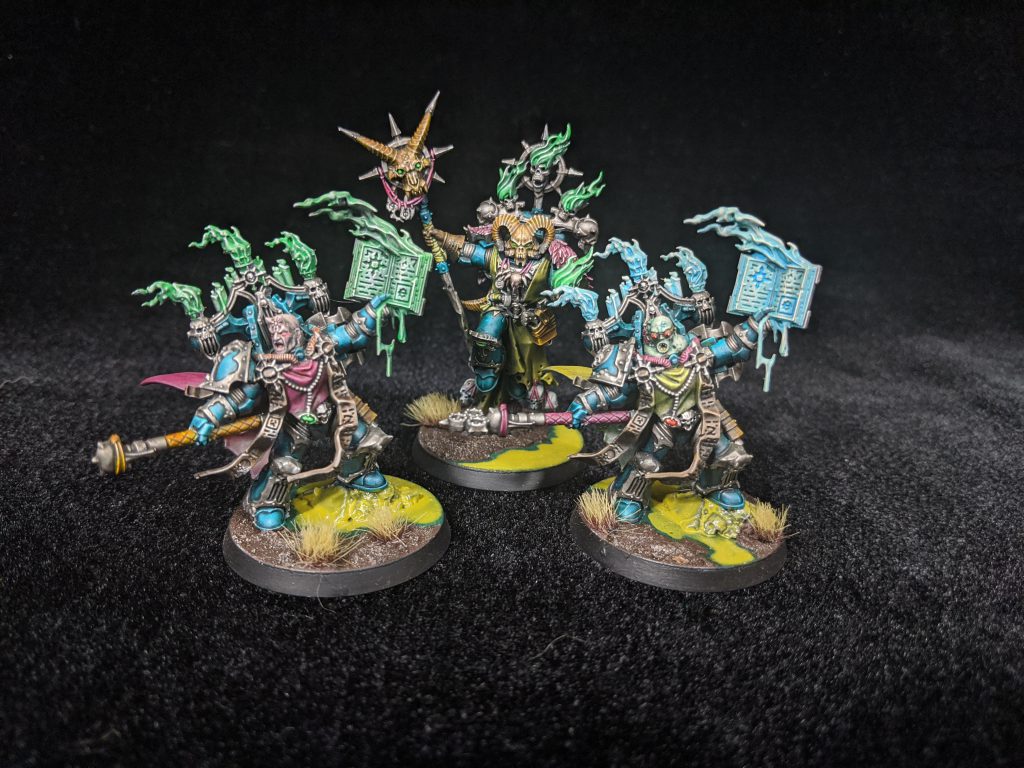 The desire to improve as a player and have the options I needed to make improvement viable is where most of my army comes from today.  I certainly wanted to own all the models I could, but the driving force for what to buy and when (mostly) came from what kind of army I wanted to field.  I’m sure you can tell from the pics that I really love Daemon Engines. Something about encasing an unwilling flesh beast in a machine half against it’s will seemed great! So I made plenty of these monstrosities.  I think the crux of what it means to play Nurgle themed armies comes from having to face down the inevitable custom model.  Daemon Princes were my first, there just aren’t any Nurgle Daemon Princes worth mentioning. Let’s be fair, if you’re playing chaos you need Daemon Princes. In order to accomplish my vision, I bought gulp Nurgle Daemons!

That’s when my army became something else entirely.  “Forces of Nurgle” is a much more apt description of what my army looks like today.  I have a respectable Daemon of Nurgle Army that was always intended as a supplement to my Death Guard.  I started chasing all sorts of different avenues.  I purchased some Forge World and heavily modified them for Nurgle compatibility.  I have mark of Nurgle Alpha Legion models, all custom kit-bashing work, I also have added the odd Tzeentch supreme command when that was viable.  I’ve never really chased any Meta while playing this army, although, if a rules change made something viable or interesting, I would buy it and play it.  Now I’m playing competitively for Northern Front and loving every maggot squelching minute of it.  I’ve moved away from painting purely for skill and have pivoted to painting for completion.  I want my army to look good, But that ever looming tournament has helped me to focus on finishing models and improving as a player. 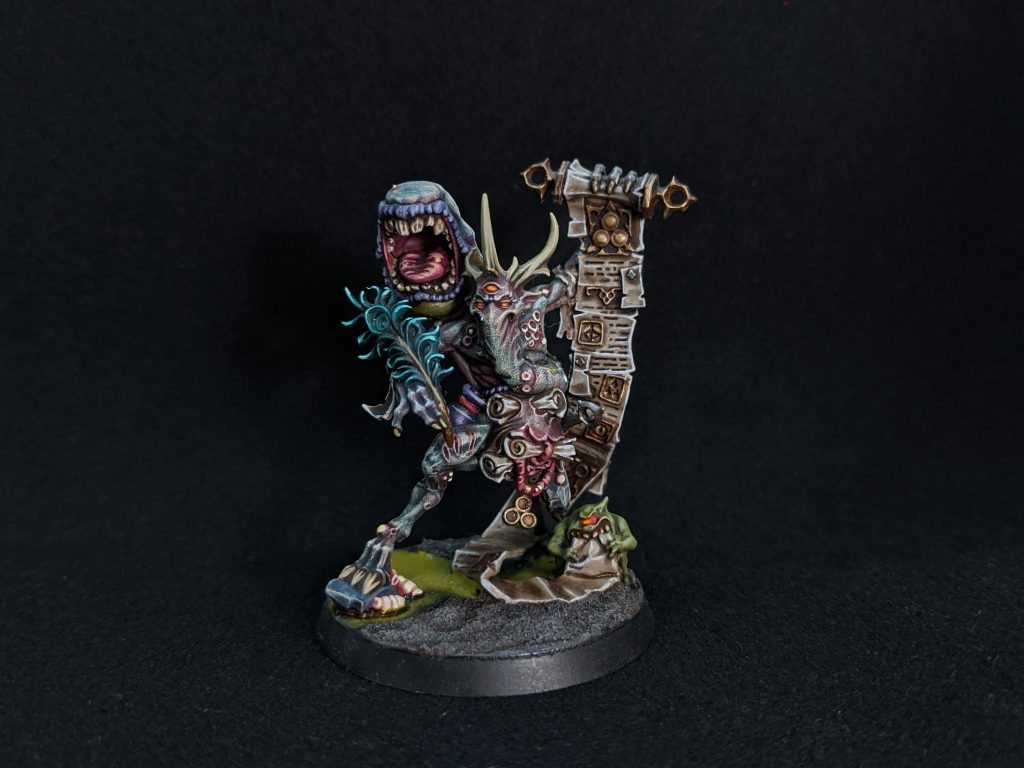 So where do I go from here? As you can Imagine I have an entire shelf full of unpainted models, not the least of which is Mortarion.  With the latest Psychic Awakening rules, changes to the marine wound counts, weapon updates, and a new codex just around the corner I have already planned to expand the army in a few ways for sure. I have many more marines and more Blight Haulers on the block. Also, an exciting new Lord of Virulence to paint. I don’t as of yet own any of the Death Guard Space Marine Heroes models; so, there’s that. Moreover, I would love to create some custom Beasts of Nurgle. I could really do with some Nurgle-themed chaos spawn as well. 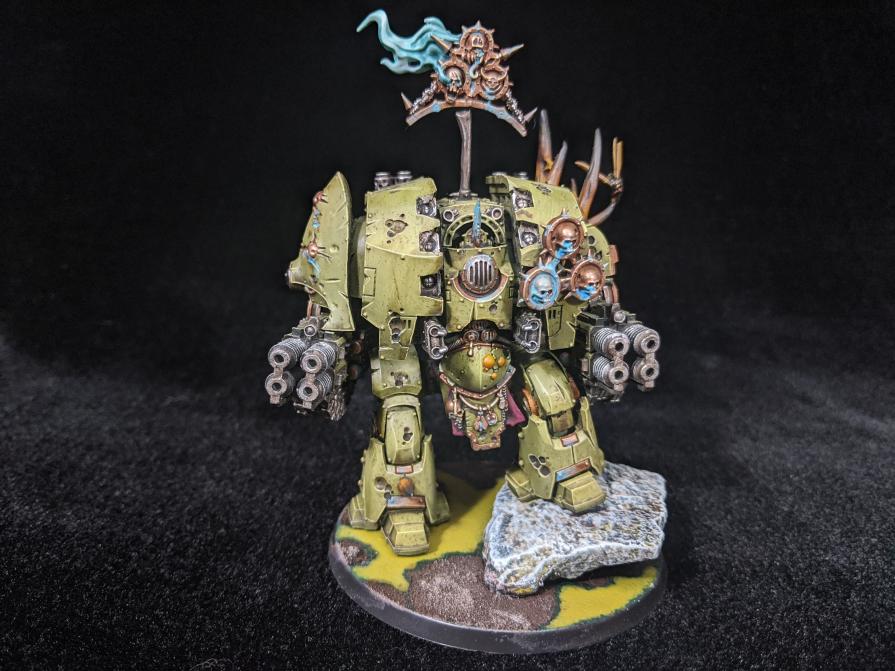 On the painting side of my goals, I am working a lot with contrast paints in a variety of ways to enhance my capabilities and speed.  They are excellent glazes and shades.  My alpha legion models were done almost entirely with contrasts, I know they have a lot of potential. I have a few things brewing on the horizon, but I’m not here to shamelessly plug anything yet. I’m just happy to share my collection with all of you! Win or lose, I always want to look good (or horrible) doing it!

From myself, and everyone over here in the 13th Legion:

Grandfather’s Blessing Upon you. 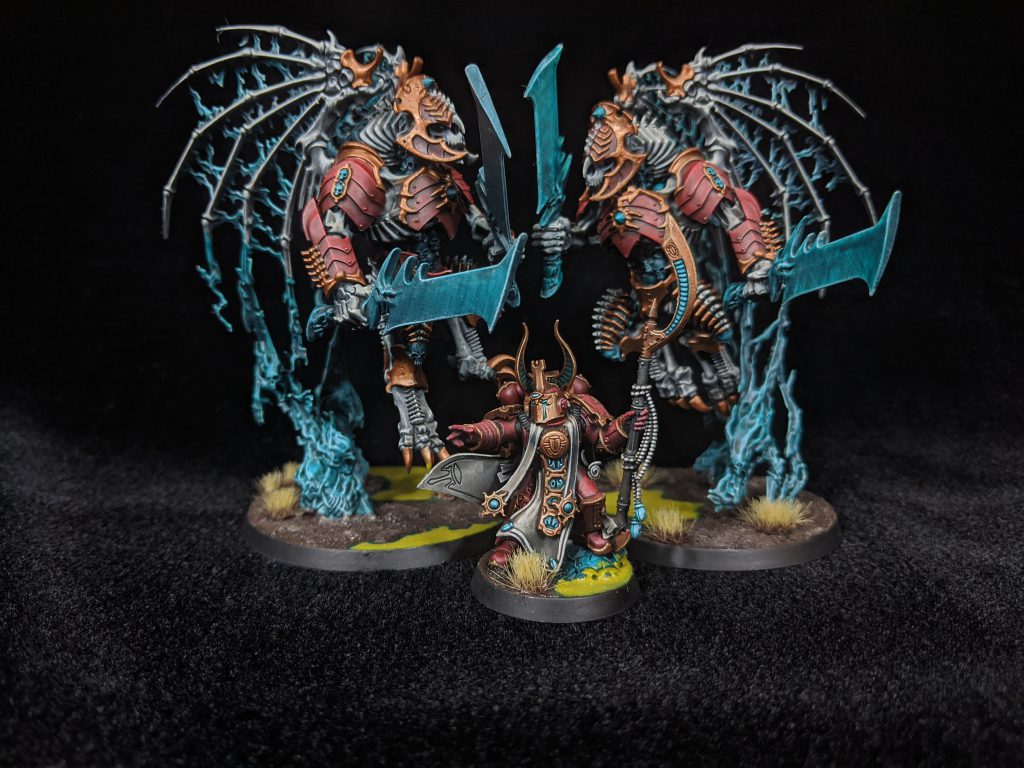 The gang all together