Finishing your own army is core to the Warhammer 40,000 hobby. In our Army Showcase series, Goonhammer contributors take a look at the armies we’ve been collecting for years, and the new ones we’ve just finished – what drew us to them, why we keep building and painting, and how they play on the table. This week Goonhammer author Greg is talking about his Fallen Angels Heretic Astartes army.

The Player: Greg
The Codex: Chaos Space Marines, kind of
Points: 750
Collecting Since: 2019, kind of

I’ve talked about my Dark Angels a few times on this site, and while I’ve spent years kicking around the idea of a Fallen Angels CSM army to tie in with them, it never came particularly close to happening – either I had other too many projects to work on, or I just didn’t feel like it, or I thought I couldn’t do it justice, or it seemed like a ton of work for something that would never have rules support. Most of that is still true, but a couple of key things made me finally get around to it, instead of firing up battlescribe while bored, before giving up without saving the roster.

One was the release of Gathering Storm 3: Rise of the Primarch, the last real rulebook of 7th Edition. It had rules for Fallen and – more importantly – a slick new model for Cypher. I instantly pre-ordered the book and the models (at the time, Cypher only came in a set with Guilliman and Voldus, so I have a Primarch mouldering somewhere in my backlog that I’m almost certainly never going to bother with), immediately assembled Cypher, and proceeded to not paint him for another two years.

The other major event was that I finally started building out Primaris infantry. I quickly realized, after working with the new kits, that I was never in a million years going to build any more small marines when I could be using Primaris instead. Which meant that my fairly extensive bitz box had nowhere to go, though I suppose you can guess where it eventually ended up.

Finally, toward the end of last year, well after Vigilus had happened and given Fallen their own specialist detachment, I ran out of other armies. I wanted a break from Booley’s Tau, and I’d resolved not to do anything with my Dark Angels until their Psychic Awakening update released.

An odd thing that drew me to the Fallen list and their weird specialist detachment is that it presented, in a way, a solvable problem: a 40k army that could be Completed. We don’t generally think of armies as something that can be “done” – to a point, I suppose, after finishing every kit in the pile, or having a planned GT list all done, or hitting a certain points level – but all of those milestones end up being temporary. As the meta shifts and new models get released, we often end up dipping back in and either adding units or wargear options. How many of us have gone back to “completed” lists and added power fist or thunder hammer Intercessor sergeants, since that became an option?

It’s one thing to retroactively declare an army done by virtue of having not worked on it for a while, when a temporary break becomes clear abandonment, but here was something I could actually plan for, from the beginning.

Due to a particular confluence of the 8th edition rules, there’s actually only one way to run a Battle-Forged Fallen list: in a single Vanguard, with exactly 3 units of 5-10 Fallen each (you need minimum 3 to fill out the detachment, and they aren’t troops, so the Rule of 3 prevents taking any more – the minimum and maximum are the same here), 0-1 Cyphers and 1-2 Chaos Sorcerers, plus an optional Rhino for each unit. If that wasn’t enough, it turned out there were really only 2 powers worth taking (ie, that didn’t key off of the HERETIC ASTARTES faction, which Fallen lose). You cannot take other units. The only choices that can accept the FALLEN keyword are Fallen (obviously), Cypher, Sorcerers, and Rhinos.

I can’t readily explain why this clicked with the part of my brain that controls my hobby time, but somewhere between the interlocking rules for detachments, faction keywords, the vast options on the Fallen datasheet, and the limited access to units, it absolutely did. For some reason I had a similar response to Necrons, before their re-do in 5th, when every single 500pt Necron list was a Lord and 2×10 Warriors, with a few points left for wargear. Something about try to optimize your decisions, despite a complete lack of choice, I’m honestly not sure.

With the most expensive wargear options on everyone – which is massive amounts of Thunder hammers, in case you were wondering – you can pad this out to around 1100 points, but I settled on a more reasonable 750, to get around having to buy 4 extra Rhinos and to allow for some variety in loadouts (read: swords). That said: yes, I know you can fill out points with summoned daemons or fortifications and not technically break the Fallen faction keyword while still getting to 2,000 points or above, but that doesn’t count. (Editor’s Note: Gunum actually did this and ran it at an RTT late last year and won a game and he refuses to write about it and I will never forgive him for that)

Between the bitz box and a few last minute purchases, what I had on hand was:

In my head, I didn’t want them to read as totally bent out of their minds on warp syrup, but I also didn’t buy that they’d be unchanged from their days as loyalists. I wanted them to look weather-beaten and dull, but for the signs of heresy to come off as scavenged parts, not obvious corruption. I decided on that before I started clipping out parts, because I needed to know to avoid Imperial Aquilas, as well as the freakier mutation bits. I leaned heavily into the Heresy-era armor, and managed to scrounge up 29 Dark Angels shoulderpads, very nearly enough for everyone to have one.

Slapping bits together completely at random, I ended with this:

I’m not sure exactly when I started referring to them as the Disloyal 32, but it popped into my head and hasn’t come out since. I had a blast mashing up all the different marks of Space Marine armor – there’s bits in here from 3, 4, and 6 through 10, if you count the Reiver helmets and legs (which made the sergeants slightly taller without them standing on a big dumb rock). I think it’s a real testament to how well-designed the range is that you can staple together random kits separated by decades and intended for different codexes, and it all kind of works.

Or, as it happens, all of the models, because there aren’t that many. I won’t go into the paint recipe too much here, since I covered it in HTPE: Dark Angels already, but the main challenge I gave myself was to make them look different than the black on my other black army, the Ravenwing. 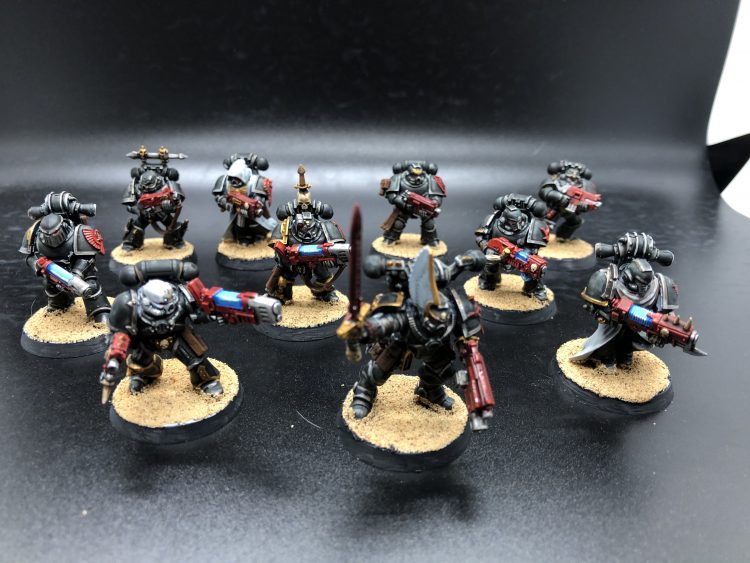 Maxed out plasma, with one combi- and five -guns. There was no way I wasn’t going to max out on these in at least one squad, since plasma is as much the Dark Angel’s bit as swords are, and I’m particularly a fan of the combination of loyalist and heretic variations on the guns.

Squad 3: Post Fallen Angels and the Heresiest Astartes u got

HQs: Cypher and a Sorcerer 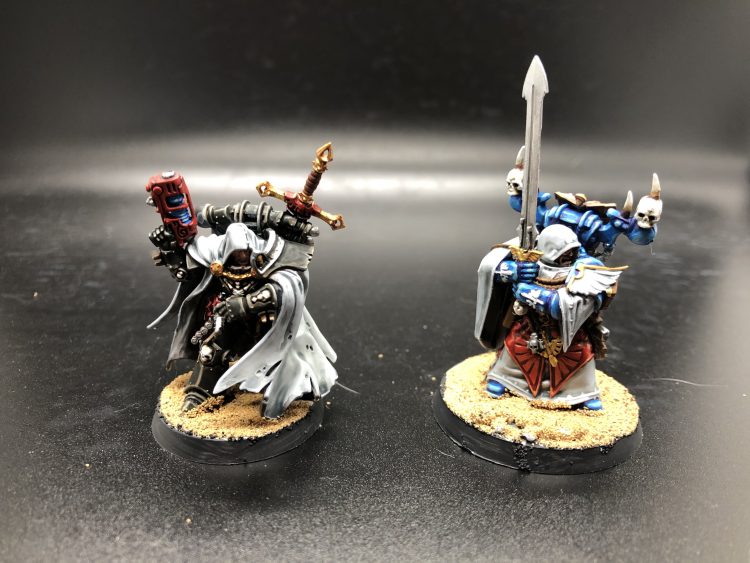 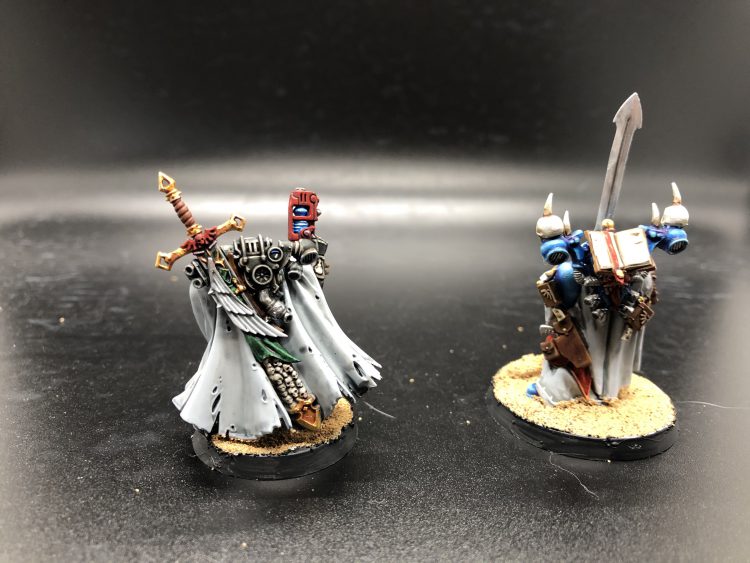 All the time I didn’t spend on the 11-point bolter joes, I put into these two. Lesson learned here: I should absolutely not have assembled Cypher before painting him. Those robes were particularly unkind, and results would have been both easier and better if I’d done him in sub-assemblies. I put more than the usual effort into the Sorcerer, who is the Dark Vengeance master with a Chaos backpack, a Deathwing head, and every single book-shaped bit I had stuck on to him. He was painted as a Librarian more because I wanted to see if I could remember how to layer than anything else. His armor was built up from Vallejo Stormy Blue in the deepest recesses, to a 50/50 mix of Bone White and Electric Blue on the very highlights. 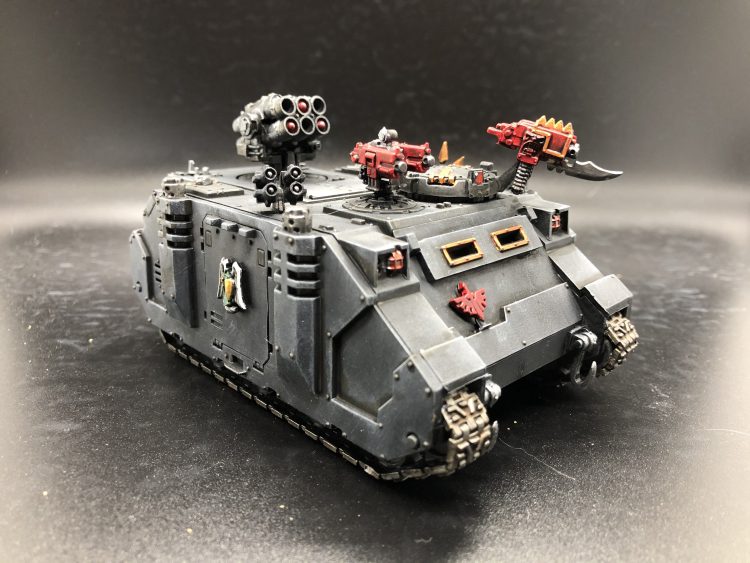 Ah, the venerable old Rhino kit. Easiest thing in the world to dry-brush and pinwash. I wish I’d had more stowage options to make it look more weighed down, but I wanted to up-gun it as much as I could, and it has the same mix of loyalist and heretic iconography, without overdoing it.

Honestly, none. I’ve already accomplished everything I wanted with this project.

I don’t have any more models to build for the army, and it’s functionally complete anyway – absent a major rules change, I literally can’t add any more units to it, even if I wanted to. I’m not likely to play any games any time soon either, let alone at 750 points, so I don’t see this hitting the table. I could see this being used in Kill Team, at least, if I can convince my wife to have a go at it. If she does, I have basically every option for a KT roster, outside of Cultists (which means I have all the options to make a terrible Kill Team).

But none of that was the point. This was never something I expected to play games with, and you can forget winning with it. It was mostly a conversion/kit-bashing project, something thematic to tie in with my main army, and a new thing to paint. Something less than a “real” army, but more than painting one-off figures, it occupies a weird niche, and I’m weirdly proud of it.

We’re always looking for more armies to feature on Army Showcase – if you have an army you’d love to see published on the site, then let us know about it at contact@goonhammer.com or on our Facebook page!