Where it came from:

People who know me know I love painting gross stuff. (Editor’s Note: This is upsettingly true.) This initially started when I got into the hobby back in 8th edition with Death Guard. Eventually I thought to myself “Man it’d be cool as hell if they had knight support” (this was a bad idea and a bad purchase in retrospect but it worked out). The issue was, the default Knight Despoiler kit isn’t very gross at all. Sure it’s got a cool skull face and it’s spiky but there’s not a single tentacle, eyeball, or pimple to be found. So I decided to make my own! I found out about greenstuff and custom sculpting and decided the best way to try all that out was on my first $150 model (again, really bad purchase). Behold The Green Knight!

From there I made a couple of Armigers to go with him and while they spend most of their time on the shelf, since Knights and Death Guard don’t really work together, they still represent the first step of my journey into sculpting and kitbashing

Fast forward to the middle of 9th edition. My Death Guard are mostly done, and I’m itching for a new painting project. I had come a long way in my hobby ability since the Green Knight, so I wanted to do a challenge for myself. One Armiger every week, for a month, culminating in a huge kitbash. I called this, very creatively, The Armiger Project. Here were the results:

Doing these really cemented my process for kitbashing and modeling. Basically my conversions either work “Top-down” or “Bottom-up”. “Top-down” is when you have a cool idea for what you want the end result to be (the spider Armiger came about from a want of a quadruped Armiger) while “Bottom-up” is when you have a cool bit or kit you really want to play around with and see on the model (the Tervigon belly was a great example of that). No matter how it starts however, the process is almost always the same: I gather what could only be described as a disaster of bits onto my hobby desk and mix up what is probably too much greenstuff. Then, as I construct the model, I compare the current step of the build with any bits within arms reach (or greenstuff) and do some dry fitting. Sometimes it fits like a charm, sometimes it takes some greenstuff and frustration. If I can share a tip for anyone getting started with these sorts of “advanced” conversions, don’t give up on a conversion, especially if it involves sculpting. Paint can do a ton of heavy lifting to make two things that look very unrelated unprimed look harmonious.

This was probably my favorite kitbash from the group created during the Armiger Project. The idea, as stated above, was to get a quadruped Armiger for the army. First I looked for some inspiration by looking at insects and such (and found this very cute moth), and decided I really liked the look of something that had assumed the carapace of the armiger for extra protection, like a parasite, but seemed small and diminutive underneath. From there I started my hunt for bits! The most spidery things I had on hand were bits from the Tervigon/Tyranofex kit I had lying around. In retrospect there were probably a good amount of better picks for the legs like the Arachnarok Spider. Tyranids are really distinctive in their style and tend to overshadow the Nurgle side of things, but I try not to inflate the prices of my kitbashes unless I’m feeling particularly inspired. That said the bits worked out well with some finagling. Basically I stuffed some greenstuff into the leg joints on the torso and then stuffed the legs into it and smoothed down the connection to make it look like a seamless joint. This was accomplished using a flat headed tool (I believe I had started using wax workers tools at this point, but honestly don’t remember), dipping it in vaseline, and rubbing the joint vigorously until I kneaded out the seams. The head swap was a simple one using the Plague Drone Head. This is a great example of what I was referring to earlier about not judging the conversion until after priming. The connection looked like crap and the model looked bizarre, and not in a good way, but all said and done here’s where we ended up:

It looks pretty seamless! The only issue is he overhangs the base a bit, but who cares he’s a cool little guy.

For the Knight Despoiler I’ll be talking about the crown jewel of the army. The frothy moldy creme de la creme. This conversion was one I knew I had to do when I saw the original model (The Glottkin for those who are unaware). To knight-a-fy him I knew I needed to add weapons for both hands and at least 2 accessories to bring this fantasy model into the 41st millennium. The lamprey fist was easy, just shove a battle cannon in there. The chain sword was quite a bit harder, I needed to saw apart the tentacle whip on the arm and greenstuff a flesh connection point for the weapon. The result was….. Fine. Most people will never ever see the defects of the connection on the table but it will haunt me until the day i die (or I cave and make another)

The sword is made up for though by the really fantastic hat. The idea was “If a stupid mutated brute was told ‘You’re a knight’ I assume the first thing he’d do is demand a helmet”. It really looks very silly and captures the fun stuff I love about Nurgle.

Painting the model took me longer than any other model I’ve ever done. For reference I’ve built and painted a Warmaster Titan in 3 days, but something about the Glottkin proved to be a huge challenge for me. It took over a month to finish but I’m really happy with the result.

He’s one of my more recent kitbashes so he’s a bit farther along in terms of skill. The goal with him was to kinda go freeform and use it as a palate cleanser after painting 40 Genestealer Cult neophytes. So I gathered a bunch of bits I’ve always wanted to use and got a big glob of greenstuff to kinda go nuts with. I generally use these sorts of freeform projects as an opportunity to learn new things and this was no exception. The left leg became an experiment to see if I could use a combination of oddly shaped leftover bits and greenstuff to build volume while keeping detail. Overall I think the experiment was a success.

The other parts of the model were mostly me just messing around. I refined my flesh blobs and how I did plastic connections on the top and added a poop waterfall coming out of it, which led to one beautiful message in the Goonhammer Patreon discord that has been pinned for posterity

The nurgling seems to like it so who am I to argue.

If you noticed the scheme on the Armiger and the Tyrants are different from The Green Knight’s, you’d be right because I really didn’t like the old scheme. The initial thought was for The Green Knight to be sworn to the death guard so I used their traditional scheme for it…Even though my Death Guard aren’t the normal Death Guard scheme…Yeah I dunno. Anyway these Armigers needed their own identity, and from there House Gloam was born. The paint formula was made to be simple but stand out on the table and allow weird fleshy bits to stand out and be harmonious against it. Here’s the breakdown:

Start at Runelord Brass (I usually prime this color)

Then do any other metallics in literally whatever paints are nearby, I find the variety helps make the knights look more unique

And that’s it for the standardized knight stuff! I really wanted the scheme to be simple so I can get past all the knight parts and focus on the weird stuff like skin and bones and diarrhea and pimples and such. For those here’s some recipes for some of the more common materials I work with

Layer up to Ushabti Bone

Wash down with Agrax Earthshade

Special tactic alert: You can put crackle terrain paint directly on the skin of the model to add a scabby texture to it

Base with Dechala Lilac (I know its weird)

Liberal use of Volupus Pink

Glaze with thinned Blood for The Blood God

Where We Are Now and Future Plans:

Currently I’m working on a knight despoiler that’s been hanging out for far too long, here’s a peek behind the curtain:

He’s getting there but .I’m kind of running out of steam on him at the time as of the writing of this article.

As for future plans, you best believe I have big ideas about the new knights coming out. I’ll probably be getting 2 copies of the box and build one set as intended and absolutely fuck up the second. I’m thinking about making the Abominant into a plague sorcerer using some leftover Great Unclean One bits. For the dogs I’m just gonna go nuts with whatever bits I have lying around and see what comes out.

And that’s it! I hope you all liked seeing the knights of House Gloam. If I may submit a challenge for people who made it this far, consider doing a small replication of my Armiger project. Buy a box of Armigers and kitbash one of them and try to have them painted up within a week! It’s more fun than it sounds, I promise. I’d love to see what you all come up with, gross or otherwise! 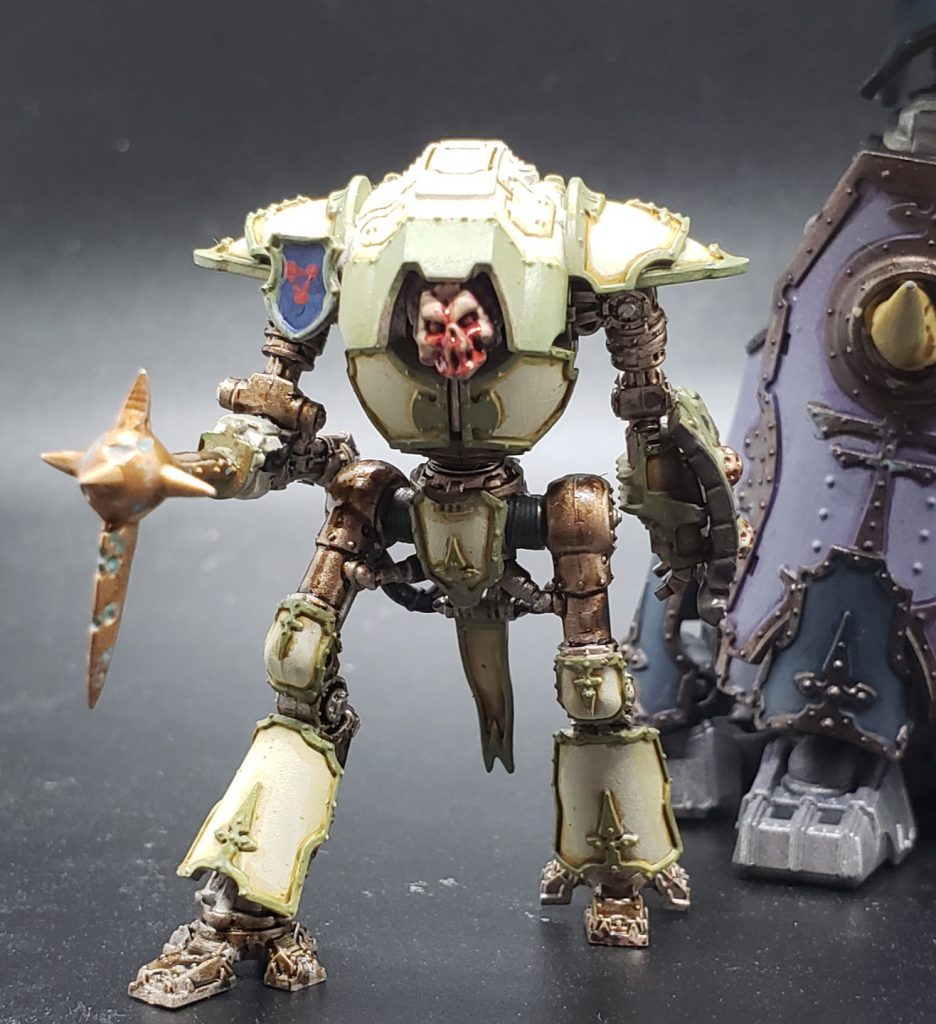 Oh huh, something huge was in the shot, I wonder what’s up with that.