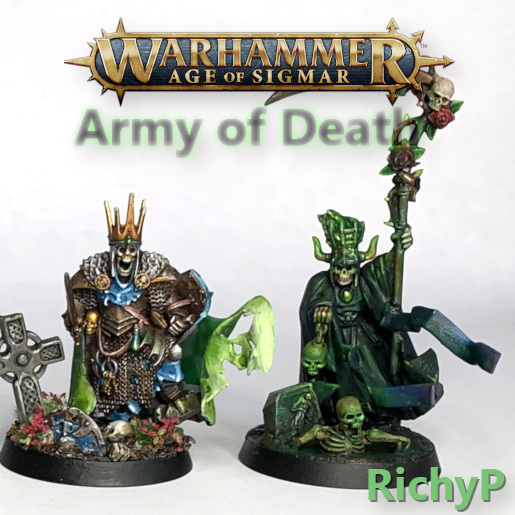 Finishing your own army is core to the Warhammer 40,000 hobby. Every Thursday in our Army Showcase series, Goonhammer contributors take a look at the armies we’ve been collecting for years, and the new ones we’ve just finished – what drew us to them, why we keep building and painting, and how they play on the table. This week RichyP is changing things up from our usual talk of grimdark millenniums to discuss his equally grim and dark Age of Sigmar Nighthaunt army.

This site’s been around for almost a year and there’s a massive dea(r)th of non-40k content. Fear no more friends of Sigmar, for that void shall now be filled as I’ve finally gotten around to getting better photographs of my mostly Legions of Nagash army that was my Christmas painting project. Like all the stuff I’ve painted in the last few years these guys are painted for fun and will most likely never see a battle to face certain undeath.

The painter: Richyp
The battletome: Legions of Nagash + Nighthaunt
Points: 1400
Collected: Since December 2018

My first Warhammer Fantasy Battles Army (henceforth known as WHFB) was the Bretonnians back from a very old starter set back in the late 90’s. Between WHFB and 40k I’ve painted nearly every army in both game systems, and subsequently Age of Sigmar (AoS). I’ve always had a fascination with fantasy undead armies and the iconic scene in Jason and the Argonauts where the skeleton warriors of the Hydra’s Teeth rise from the ground is one of my favourites.

Obviously Orcs and Goblins are the best, but an army of ethereal energy and shambling bones owns, err, bones.

I bought the Soul Wars stater box when it came out, mainly for the Stormcast guys with the Nighthaunt remaining forever attached to their sprues. Then over Christmas last year I did my usual thing and bought something new to paint, the Dreadblade Harrows or the “ghosts on ghost horse guys”. For fun I tried to make them as eye-searingly bright as possible by using white primer and a lot of yellow and green glazes.

Happy with the result I did what I always do, move on to something different, so I bought a box of skeleton warriors and thought about how I could make them part of a coherent army. My solution was to make the greeny/yellow glow a kind of Necromantic Ethereal energy that runs through the whole army, so what’ll you see is the most ethereal aka the Nighthaunt units almost entirely green and the organic units with a bit of green glow powering them (skeleton eye sockets, torches etc…) In the case of the Necromancers they’ll have the source of the energy painted on to their spell casting implements.

To reiterate the guys were painted for fun, are probably not entirely game legal (though I think as Grand Host of Nagash and Nighthaunt allies, it is legal) and were painted over about 6 weeks or so (Dec 2018 – Jan 2019)

Like the circle of life (and death) I’ll probably come back around to death for another pass soon and add some Flesh Eater Courts units to the gang, even though thematically it doesn’t really work. In the meantime though here’s the state of paint right now.

Above are the units of the army all together, it’s very Hero heavy with 5 out of the 6 allowed Heroes (got to have them spells) and the bare minimum of 3 Battlelines, IF I run the Skeleton Horde as 2 blocks rather than 1, because GHoN lets you rock Grave Guard as Battleline.

These are 4 of the 5 Hero units, for some reason I forgot to include the allied Guardian of Souls in the shot. From left to right, Necromancer, Vampire Lord, Wight King with Tomb Blade and another Necromancer (kitbashed mostly from the Battle Wizards box). You can see the aforementioned green glow coming from the necromancers skulls and the skeleton being summoned from the grave on the right. Also the Vampire’s dagger is glowing with the same green energy hence the reflection on top of the grave.

Up next are three spirit hosts. These guys were painted entirely with a Hexwraith Flame, followed by a drybrush of white and a glaze of Casandora Yellow + Athonian Camoshade + Lahmian Medium (all equal parts) This was the mixture I made up for the Dreadblade Harrows that I bought earlier and is used on all the ghosts.

I managed to grab the Start Collecting: Flesh Eater Courts box for cheap, so the (as yet unpainted) Terrorgheist and the Vargheists were assembled to join the gang. Being mostly vampire I had to bring the green in another way on these guys and therefore opted to do their hair in the lovely green mixture used on the Nighthaunt.

I decided to use some of the Soul Wars units to add some more green to the army. Above are some Glaivewraith Stalkers, Guardian of Souls with Nightmare Lantern and the Dreadblade Harrows that started the whole thing.

I got these guys in a Secret Santa on our Discord so it would’ve been rude not to include them. The 10 pots of Baharroth Blue also in the Secret Santa parcel however were mostly absent…

… like I could not use it. The Skeleton Warriors from the Start Collecting: Skeleton Horde box were joined by a second box of Skeleton Warriors. They were really easy to paint too, prime white then liberally cover the whole thing in Seraphim Sepia. I drybrushed some Ushabti Bone on a couple of them (mainly on the top of the heads) to give them a bit of variety. The blue is Thousand Sons Blue highlighted with Baharroth Blue. I also added a bit of purple to some of the ragged cloth on the shields just to tie them into the Vargheists earlier, and of course the green glowing eyes.

The final unit I painted up before moving on to armies new was the the Grave Guard. I painted these guys the same as the Skeleton Warriors, but as there’s so little exposed bone it would’ve been a lot easier to prime them in metal and paint the bone. Speaking of metals, the rusty armour is: Lead Belcher, lots of Rhinox Hide stippled on, with some orange stippled over that, and washed with Agrax Earthshade. Finally stipple on some silver on the sharpest edges to make it look scratched where it may have recently moved or been hit.

The green torch was just another way of tying these guys with the Nighthaunt.

I painted a similar size Chaos Army too and may do another piece on those guys in the future.