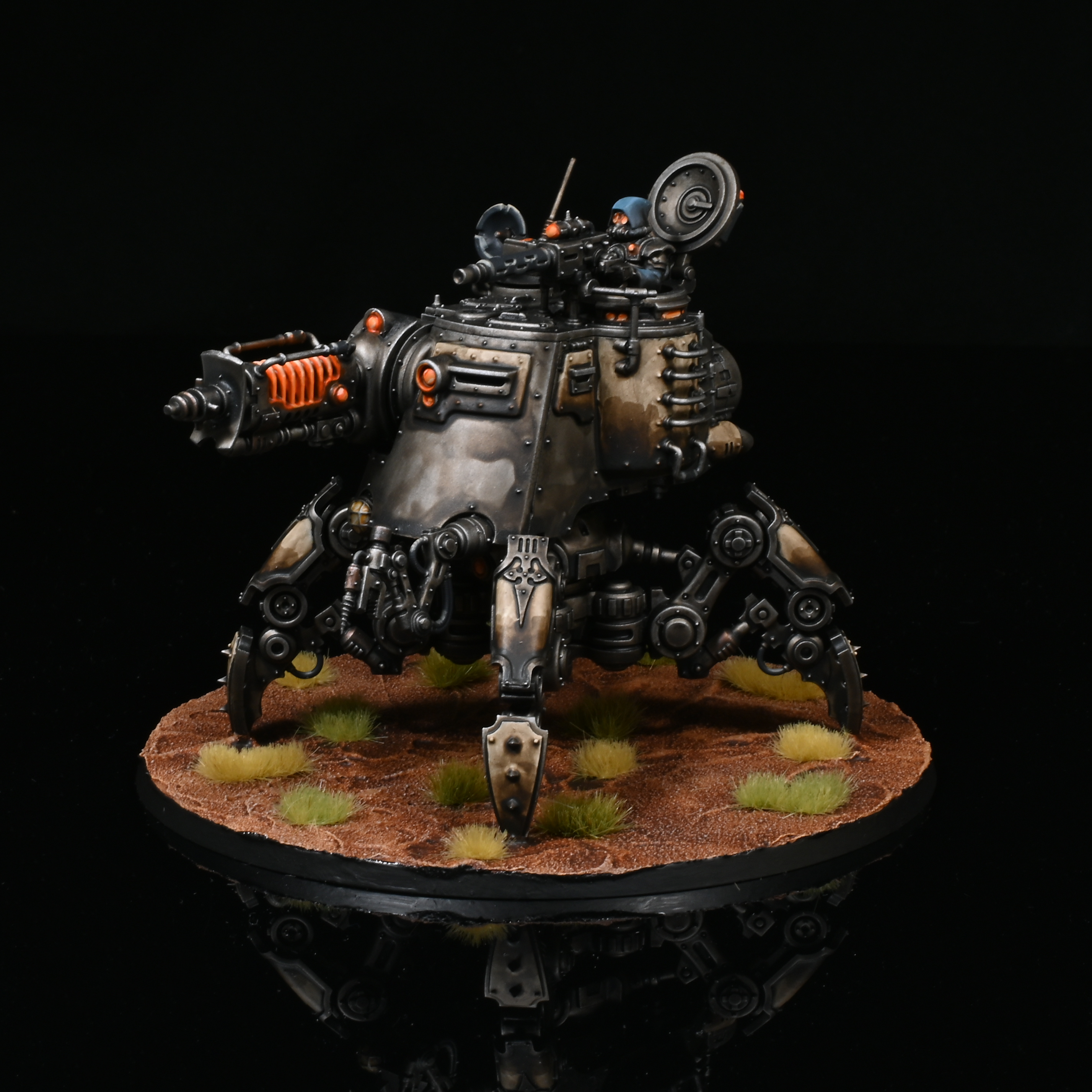 Finishing your own army is core to the Warhammer 40,000 hobby. In our Army Showcase series, Goonhammer contributors take a look at the armies we’ve been collecting for years, and the new ones we’ve just finished – what drew us to them, why we keep building and painting, and how they play on the table. This week Rockfish is talking about his Adeptus Mechanicus force!

If you have been watching our Hobby Round-up articles you might have noticed that I tend towards having both a pretty decent output and army ADHD, as my year in review can attest I am not the best at keeping myself on track. This has been made worse by the lock down continuing to stretch on here in southern Ontario, so I can’t say its too surprising that I would start yet another army.

I don’t remember exactly what prompted me, but I believe it was probably Pendulin gushing about some model or other shortly after some teaser about the upcoming book late at night on our discord, regardless of what it was, I assure you that I need no high minded reason for starting a army!

When I was trying to come up with a scheme I went into it with a few key points I wanted to focus on:

After that the colours actually came together pretty quickly, I had a bunch of Iron Hands Steel lying around from my Necrons already and I reused the idea of how to get a get a rich metal from multiple washes.

When I was messing with the ceramic colour, I realised that I could really lean into the grime to create the contrast within panels by darkening the lower areaswith washes rather then trying to glaze up or edge highlight the highlights in

After that the secondary colours in the cloaks and glowing energy kinda came in organically as I had not painted either of those recently and just felt like it.

If you have interest in copying anything from the scheme, take a look at my write up here:

As of time of writing I have around 1700 points in this army, which is pretty good for only 3-4 months of painting when I have also been working on a assortment of other projects! Beyond what you can see here, I already have a knight on my work bench that is all but done, which will catapult me over 2k on its own.

I have yet to give this army a go on the table, but hopefully with more vaccines coming in I will get a chance before too long. I have the Charadon Act 1 book and the aforementioned knight so I was probably gonna be running these fellas as Metalica, but I am open to whatever strikes my fancy at the time.

At time of writing the codex was just announced for pre-order so I am pretty hype for that! I will say that I was not expecting for the book to have been delayed long enough for me to have passed 2k before it drops, but it looks like that’s what will happen.

I ended up magnetizing vehicles but I will confess a slight worry that being driven by rule of cool for infantry loadouts might come back to bite me, but with luck there should be some fun stuff I can whip together out of what I have so far.

I am not really sure how large I am intending the army to get to, I already have a decent little force with most of the models I like so I might just fill out those existing units. however, I am also expecting that some of the twists the book brings will make me want to pick up some unit or other.

The one set of models I really don’t have in my eye for the future are the newer models with wings, and I am really not interested in dealing with the abominable new flight stands so I am not sure when I will get around to them. They are very rad models though, so I am not exactly gonna count them out, particularly if they are pushed in the new book.

You can already see pretty much everything in the army shot besides in progress models and a tech priest, but here are a few more shots of the models on their own.

I work at a pretty brisk pace, so check my insta out for pretty regular updates if you want to keep up with this army.