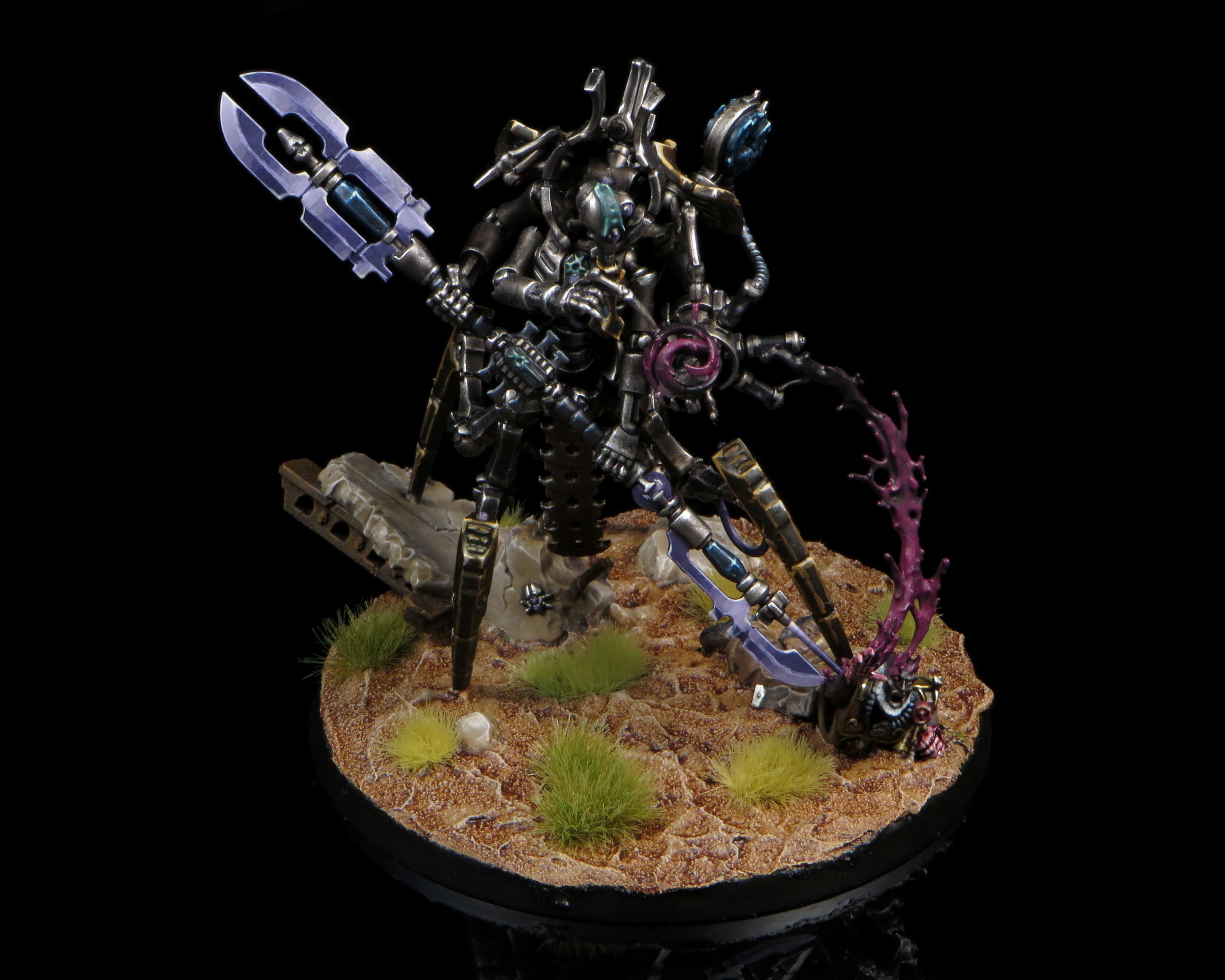 Finishing your own army is core to the Warhammer 40,000 hobby. In our Army Showcase series, Goonhammer contributors take a look at the armies we’ve been collecting for years, and the new ones we’ve just finished – what drew us to them, why we keep building and painting, and how they play on the table. You’ve previously seen him talk about his beautiful T’au army in this space, but this week Matthew “Rockfish” Herrington is talking about his Necrons!

I have considered starting a necron army from relatively soon after I started into 40K, but I was always more attracted to a theoretical version of necrons then the models that were actually available. I hope I don’t offend anyone, but I found a large portion of the existing range kinda goofy with their weird green rods and giant dollar store diamonds. They had some great models, but the army was held together by a few more ugly models then I was willing to deal with. However, when they announced Szeras it was such a fantastic model that I knew I had to paint him, and well if I was doing that I may as well suck it up and deal with the stuff I found a bit janky.

I ended up ordering a SC Necrons shortly after Szeras was unveiled, but given the complications of the time, the box took well over a month to get to me. Of course, once the box was about to arrive the 9th trailer came out along with a glut of new models being revealed through leaks and warhammer community articles.

Seeing the fancy new warriors was a bit of a bummer when I literally just got the old sprue, but the hype train from all the new stuff was not to be stopped by that! I ended up replacing the green rods with the ones from the immortal’s gauss blasters, and to be honest it can be surprisingly hard to tell them apart from the new ones at a distance. It was at least good enough I was willing to put the effort into finishing the warriors rather then having them end up in the box of shame, but before I could paint them I needed to figure out what scheme I was going to do…

I already knew at this point that there would be new marine kits aplenty, as a result my Salamanders were going to be expanding at the same time as I was just starting a new army. So the necrons had to be simple to paint, preferably a colour I have not really done and I also wanted the scheme to reasonably unique so I did not have to agonize over potential rule changes from being locked to one of the existing Dynasties. (Yes I know in casual games it’s normally fine to do whatever, but I feel weird playing rules other then my official sub-faction so whatever.)

In stepped the old warriors who were sacrificed at the altar of colour scheme development! I started with the metal since it was going to dominate the scheme by dint of necrons being egyptian terminator knock-offs. I ended up messing around with washes over a base coat of iron hands steel, but got frustrated with how weak the washes were and just threw contrast paints at the problem. It turns out a combination of agrax followed by a rich wash of basilicanum produces a wonderful battered and aged metal. After that, I went for a fairly limited colour palette and minimized highlights, initially only having four main colours on the models themselves. This would not last as I cannot really control myself and it looked a bit plain, so when szeras came out I knew I was going to be working in a few more colours and push the highlights a bit further.

I am pretty pleased with how Szeras tuned out, and if you want to see how I painted him, which also helps to cover the scheme in its entirety, check it out in our How to Paint Everything: Illuminor Szeras along with RichyPs fantastic scheme!

I will be honest in saying that I still have not actually played a game with this army as it is right now, by the time I felt comfortable to play a game locally it was but a month or two to the new codex. So it seemed prudent for me to just get some games in with my other armies, since I knew once the new codices started dropping it would be pretty tough to drag myself back to the old stuff.

I use the excuse that it would be inefficient to learn the old codex with the new one just around the corner, but to be honest I didn’t really want to be disappointed with their current state. While I imagine it’s not quite as bad in casual games as the internet makes out, I know enough people to doubt it would be the height of excitement that one would hope for for a army that had yet to see the table top.

At the time of writing there are less then two weeks before the codex drops, and I am rushing through my backlog to be ready in time. I have managed to finish off the necron half of Indomitus with plenty of time to spare, but I still have one marine from the box set left and a handful of unbuilt older necron kits. At my current rate, I might even finish it all off in time!

On the Covid-19 front, I am hoping that the second wave is not too bad in southern ontario, but cases are ramping up fast enough that I am somewhat concerned that I might not get to play a game with this army before next year. Unfortunately, all I can do is cross my fingers and wait to see what happens. I comfort myself that at least there is a absolute glut of insanely cool models coming to occupy my free time if we do go back into hard lock down.

I actually have individual photos for the majority of this army thanks to being recent, you may have even seen them pop up in a few other articles! I have amassed a decent collection given how recently I started the army and having not entirely focused on them, it is a bit heavily weighted towards HQs, but with the new stuff coming I am sure that will begin to change. (Szarekh is not going to help, as I am 100% painting the big fella)