The Painter: Robert “TheChirurgeon” Jones
The Army: Death Guard
Points: About 1,000
Collected: Since 2017

Leaks of Death Guard models and Mortarion started dropping about 6 months before 8th edition did and boy I was ready for them. At the time, it was a huge bonus, coming off the back of a new Thousand Sons release and the Traitor Legions supplement, which added all kinds of cool new rules for Chaos Space Marines (R.I.P. Traitor Legions, 2017 – 2017). And you may remember from my previous Army Showcase that I’m a bit of a fan of Chaos Space Marines going way back. So I jumped in head first on the new 8th edition Death Guard, grabbing up everything I could. I loved the models and they looked like a blast to paint. Now two years and an overhaul of the standard Chaos Space Marines line later, I’ve played exactly zero games with my Death Guard. Which isn’t to say they haven’t been used — I’ve run my Death Guard in Kill Team on several occasions now, using Plague Marines as the core of a mixed team. I just haven’t gotten any games of 40k in with them. Which is in part because I haven’t painted most of them yet and I only play with painted models.

Well, that’s going to stop. Heading into the fourth quarter of 2019, I’m finally coming back to my Death Guard with a plan to finish them by mid next-year.

Currently I have about 1,000 points of Death Guard painted, including a squad of 10 metal Plaguebearers. This includes the entire Dark Imperium set, plus a Necrosius the Undying (the Forge World Plague Marine Sorcerer, a much better model than the Malignant Plaguecaster) and a single Myphitic Blight Hauler. 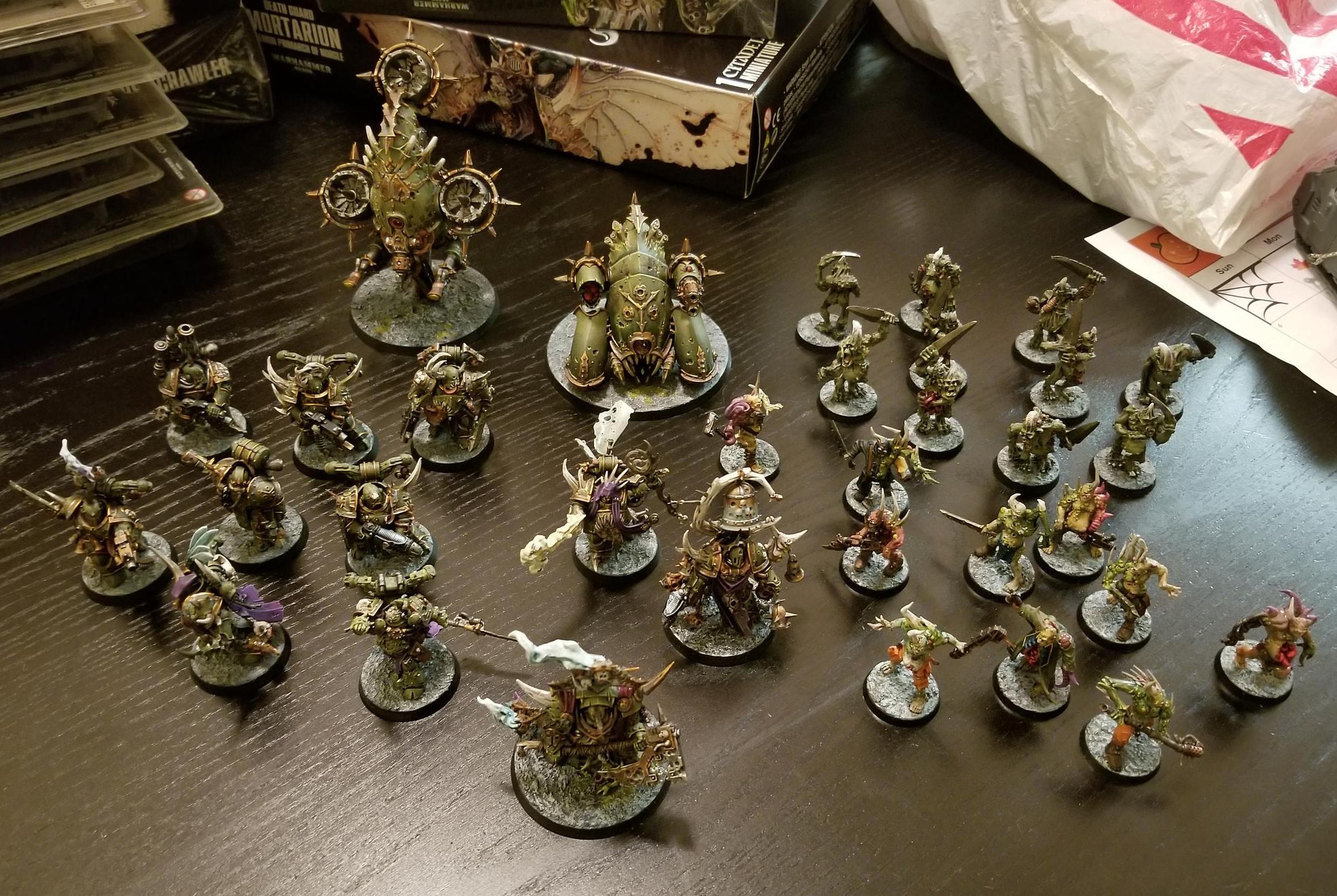 Overall I’m going with the green look over the white. While I like the white/bone-colored look, it’s a lot harder to pull off and I’m partial to the more classic green-hued Death Guard. I already covered how to do my paint scheme for Death Guard back in Monday’s How to Paint Everything: Death Guard article, so if you’re interested in replicating my effects, I’d check that out. Otherwise, these guys have been a blast to paint. It’s cool being able to play with almost every one of the GW technical paints as I work on these guys, and it’s great to do an army that’s designed to look somewhat sloppy and gross. The Lord of Contagion, the Bloat-Drone, and the Blight Hauler are some of my favorite models I’ve ever painted and I’m not at all worried about painting more of them. I’ll eventually have 3 of each, so it’s good that I’m not already sick of them. One of my life goals is to one day have a Fleshmower Bloat-Drone mow a jet out of the sky. 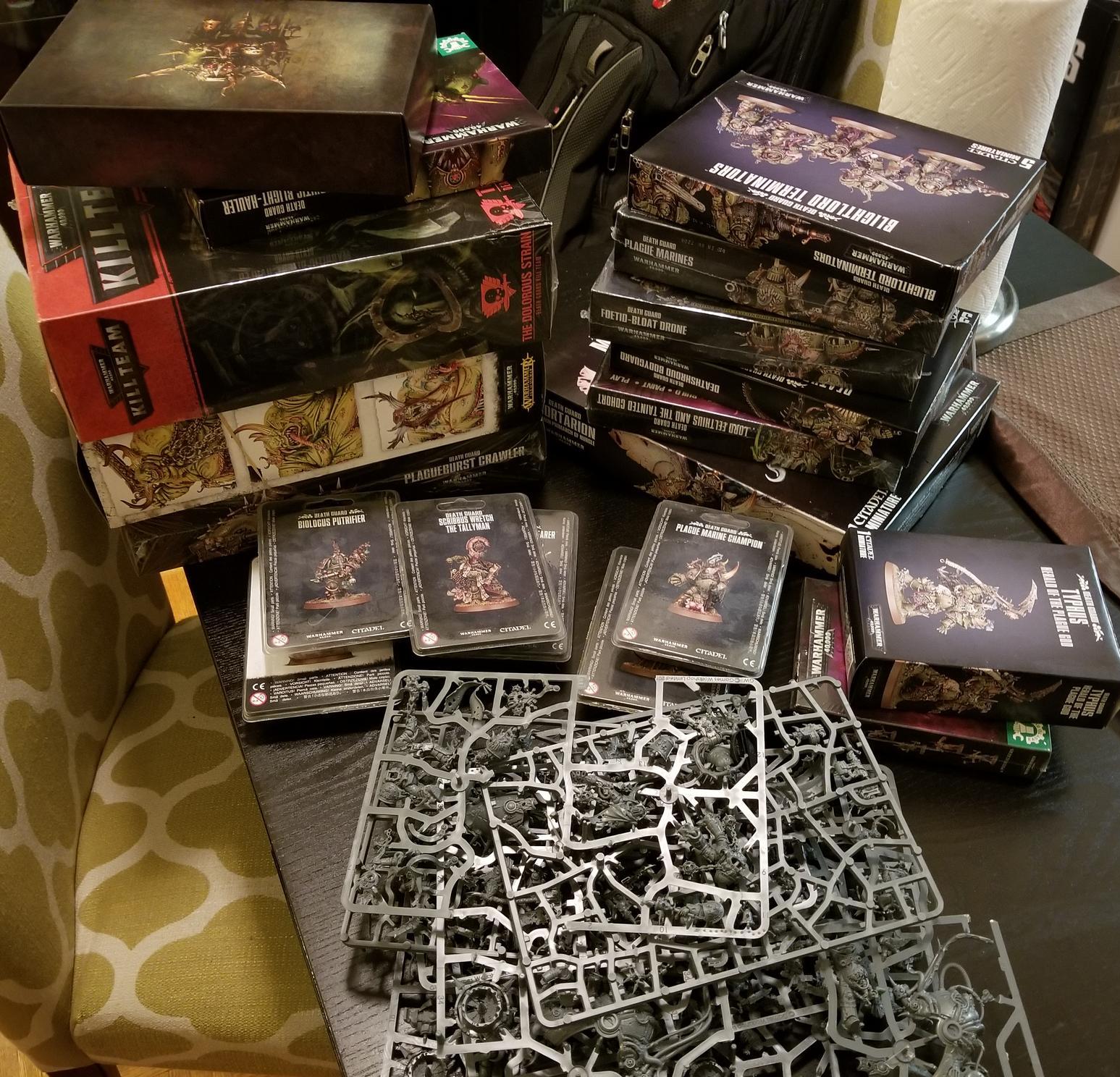 In that stack is a set of Dark Imperium Sprues, plus pretty much one of every Death Guard Kit, a Great Unclean One, and a Dolorous Strain Kill Team Elites kit. So basically, another two to three thousand points of stuff to paint, and that’s before you figure that I’m gonna add one more Bloat-drone, a Myphitic Blight-hauler, two more Noxious Bilebringers, and two more Plagueburst Crawlers to the stack! Oh and also I just ordered a set of the new Wave 3 Space Marine Heroes minis that feature the Plague Marines because I don’t want to have a single duplicate model in my Death Guard army because I’ve got brainworms. The good news is that Death Guard paint up faster that most models I’ve worked with, so I’m hopeful that I can get a good chunk of this done by the end of the year or early next year. and really put some work into culling my backlog. Then I’ll just need to find shelf space to store all these beautiful new painted models…

Alright, let’s talk about the models. My favorite model in the army is the Lord of Contagion. This guy turned out really well and was a lot of fun to paint. In particular, I’m happy with how the metal on his Plaguereaper turned out.  It’s such a nasty-looking weapon.

Next up is the Malignant Plaguecaster. This guy turned out OK, but I hate the model for this thing. His face and head just look so doofy. I get what they were going for with him blowing the miasma of pestilence from his hands but the effect doesn’t work at all.

On the other hand, the Forge World Death Guard sorcerer is a much better model and I can use him as the much better Necrosius the Undying when I play with him. Height-wise, he’s on par with the new models but not quite as bulky, owing to being several years older.

The Noxious Blightbringer rounds out the character set. I probably won’t use this guy much, but I’m pretty happy with how he turned out too. It’s a cool model and I like the bell and cloak combo. Doing the freehand design on the front cloak was pretty easy and overall it turned out very nice.

On to the troops! I’ve got a single squad of Plague Marines done, from the Dark Imperium box set. These guys were also fun to paint, though I’m not a huge fan of that champion model who is missing a face.

And I have 10 Poxwalkers painted. Which is not nearly enough, I know. I’ve got 30 more around here somewhere to paint. 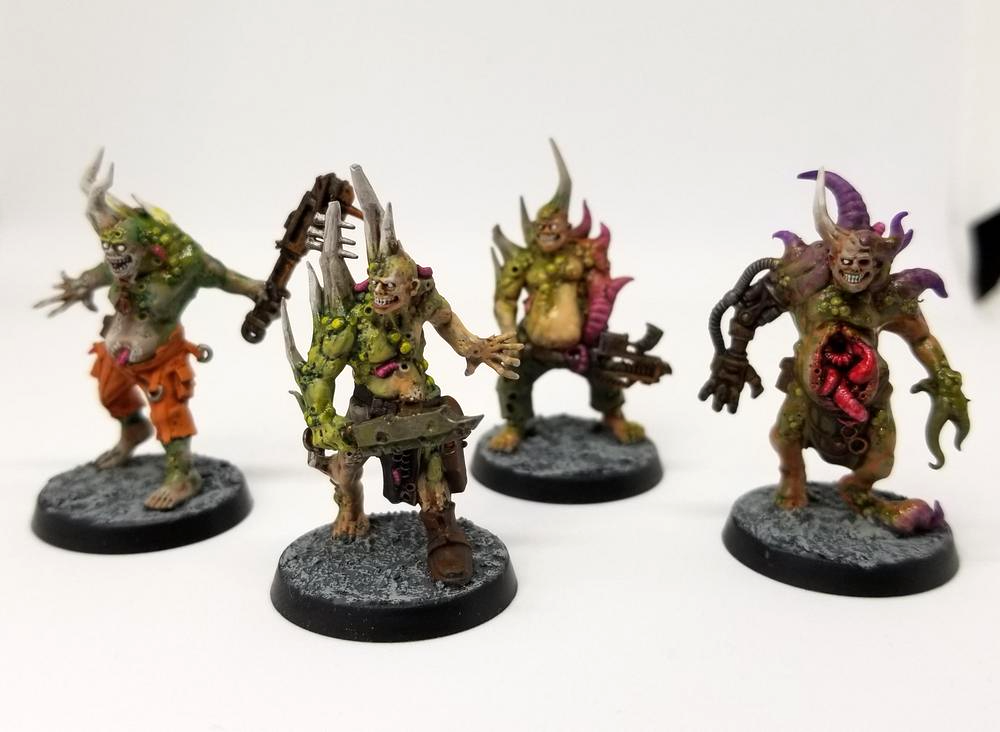 Next up, the vehicles, my two favorite models in the army. Here’s my Foetid Bloat-Drone. I’m really happy with how the eye lenses turned out on this one and the Blight-Hauler. One secret I use is that I paint over the lens with ‘Ardcoat when I’m done, to give it a glossy finish.

And the Myphitic Blight-Hauler to round things out. This little guy is a very cool model and I’m already looking forward to painting another.

Next Time: Even More Chaos Mans

The Death Guard are probably my smallest Chaos army that I’m actually working on, so the next time you see an Army Showcase from me, it’ll either be a more finished version of this army or it’ll be one of my other armies. Probably my Iron Warriors, since my Black Legion are in the process of being replaced with newer models. Either way, should be a fun next few months as I dive back into these jerks. Until then, if you have an army you’d like to share for our Army Showcase series, shoot us a note in the comments below or email us at contact@goonhammer.com. We’d love to have more armies to showcase!