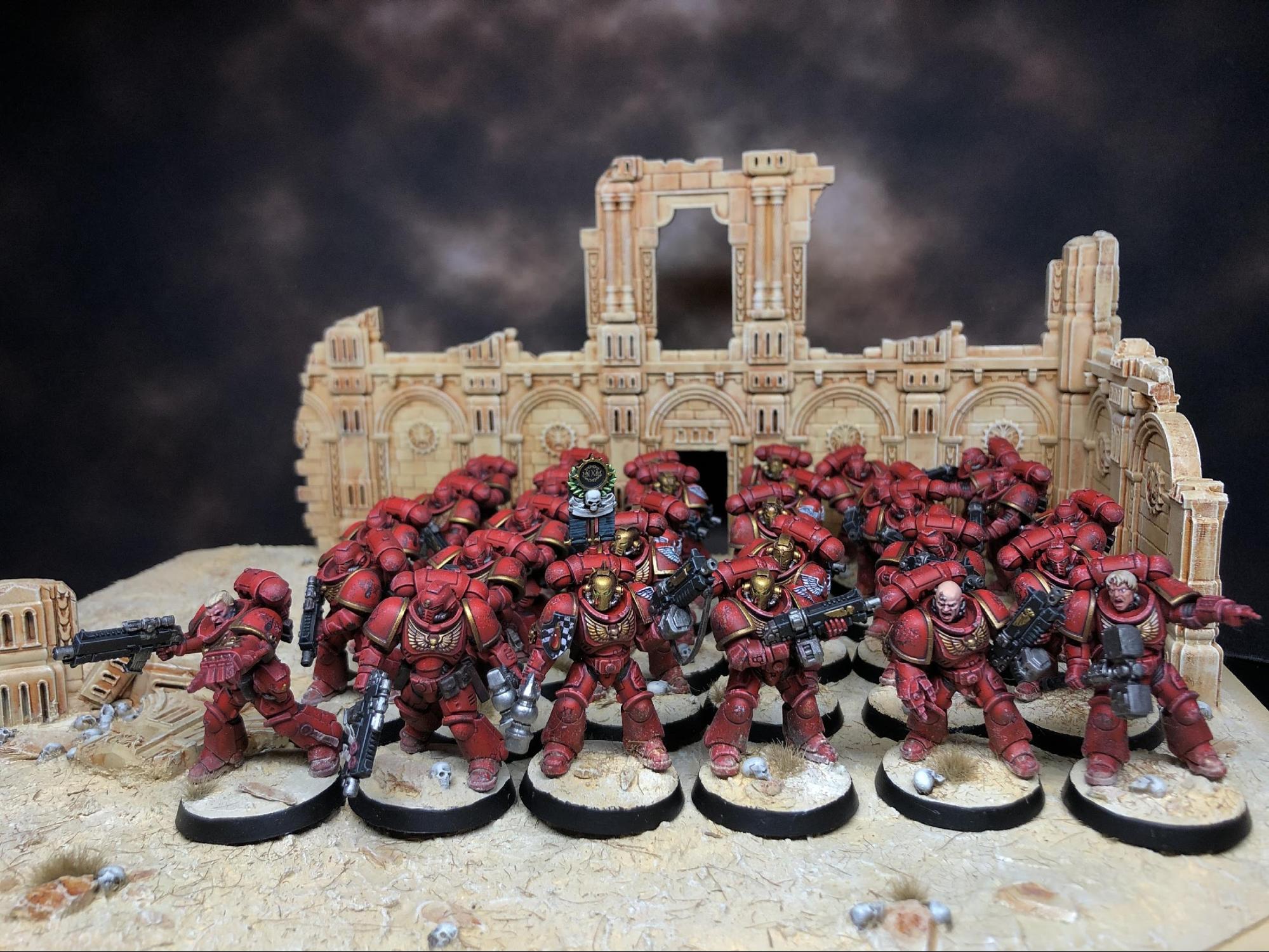 When I decided in late 2019 that I wanted my next army to be a Primaris Space Marine army, I didn’t have a concrete idea of which Chapter I would collect. I did, however, have a good understanding of what I wanted from the project. I didn’t want to just paint the same armor color over and over again, so the Chapter had to have specialist units or alternate schemes within the army that would present new painting and modeling challenges over time. It also had to fit my play style on the table: hyper aggressive and close combat oriented, preferably with a chain weapon! And thus, it did not take me long to settle on Sanguinius’ sons: The Blood Angels.

Whenever I start a new army project, I try to identify different areas of my painting/modeling that I want to improve on with that project. Because I was starting a Space Marine army from scratch in the post-Primaris era, I resolved to only include first-born Space Marine units if I could figure out a way to make them appropriately scaled to fit in alongside Primaris Marines (with notable exceptions for vehicles). This was the first area that I wanted to focus on improving: my converting and kitbashing skills. I also wanted to improve my weathering techniques and my basing scheme.

An important question at the onset was also: If I’m going to do a Blood Angels army, what is going to make it different from other Blood Angels armies? Scaling up the models to fit in with Primaris was one way, but I also wanted to distill the paint scheme down to a core palette, and then scrape that palette across the parking lot to scuff it up. Red. Gold. Black. White. The sand of Baal.

I eschewed the more modern 40k iconography in favor of a more Horus Heresy-era apporach: Red armor, gold shoulder pad trim, green lenses, black bolter casings. Gold helmets for veterans/officers. Forgeworld’s Blood Angels Legion transfer sheet for icons. Chipped and dusty armor. Blood. Minimal OSL. I wanted to take the image of the perfect and polished artists, the flawless Sons of Sanguinius, and make them look like they’d been fighting across shattered rockrete for months. Later I would throw in another homage to an earlier aesthetic by painting a forward operating force within the army (mostly Phobos units and fast movers) in a desert camo scheme inspired by 2nd Edition camo Rhinos and Land Raiders.

Looking back at the project as it stands now, I am very proud of how those areas of this army have progressed. Going into the project with a clear idea of how I wanted it to ‘feel’, not just how it should be painted, has been a constant source of inspiration as the army has taken shape. I’ve loved painting every unit in this army, and I can’t wait to add to it!

This is, by far, my favorite army that I’ve ever worked on, and the one I’m most proud of. At present this army stands a little north of 11,000 points painted, with plenty more to come in the future (more on that in a bit!). Blood Angels are a very character-heavy faction, and also have a number of iconic chapter-specific units to choose from. I think those areas are where this project really coalesced into what I had envisioned at the beginning.

The models that stand out the most in this army are the characters I converted using Primarchs from Forgeworld as the base models. From my first, Captain Amareo Castivar, to Astorath and Lemartes, and most recently, Chaplain Ikembe Basollus, these models absolutely set the tone for the entire army project. The other iconic Blood Angels units that got scaled up were the Sanguinary Guard (using Custodian Guard bodies), and Death Company (using Phobos armor bodies). The Sanguinary Guard required some careful trimming to get the jet packs and helmets to work, but the Death Company were very straightforward kitbashes with the original kit.

The other standout is my Relic Leviathan Dreadnought that was heavily inspired (read: shamelessly stolen) from the incomparable Andy Wardle and his Ultramarines Relic Leviathan. I would also be remiss if I didn’t mention the largest (and ironically almost completely useless) model in the army: The Mastodon Heavy Assault Transport. It’s enormous, it’s absurd, and it can’t even carry Primaris Marines, but it’s glorious and I love it.

It speaks to the strength of the Primaris Marines line of models that they hold their own in the collection alongside extensively kitbashed and converted specialist units. The forward ops contingent of the army is also a great example of how just changing the color scheme for these models can give them a completely new impact. The forward ops/fast mover contingent of the army has emerged as one of my favorite parts of the project. I use shard camo stencils from Fallout Hobbies to lay down the camo pattern, and then apply an oil wash filter over the models to shade them and give them that gritty finish that’s expected of units in the field. Painting that portion of the army is such a different approach that it feels like painting an entirely separate army, which is a welcome respite when working on a sea of red models!

Though I feel like I can play a myriad of lists with my Blood Angels as they currently stand, there are some glaring omissions that I’ll need to shore up as I get back to playing in person and heading to events post-vaccination. Key units like Assault Intercessors and Eradicators are assembled and patiently awaiting paint alongside cornerstone characters such as a Librarian Dreadnought and Primaris Chaplain on Bike. But that’s really just scratching the surface of what I have planned for this army.

Going forward, I want to finish off the core Indomitus-era units for the main force (baseline Primaris units) so that I have a large pool of basic units to draw from when writing lists. I want to finish adding some Assault Intercessors and Dreadnoughts to my already outsized Death Company contingent, as well as a Death Company Captain (made from Angron) and Lieutenant. This will enable me to play a complete Death Company army if I wanted to (which I absolutely will).  I also have a few units to add to my forward ops contingent (Incursors, Storm Speeders, Gladius Tanks) before they’ll be able to be fielded as their own army, which will be especially cool for Crusade campaigns! One-off projects like the Astraeus Superheavy Tank will also be sprinkled in along the way. I’m also looking forward to building a display board for when I attend events, and to compete in Armies on Parade later this year.

As the baseline units are finished and added to the army, I’ll be able to go as far afield as my inspiration will take me in search of new units and characters to add to the army. I’m already having fever dreams of scaled-up Assault Terminators pouring out of a dedicated Spartan (or the Mastodon!), led by a Librarian; or tortured Death Company characters and Astorath’s Erelim Honor Guard. Hopefully I’ll have made a significant dent in my backlog by the time Games Workshop releases their next wave of Primaris Marines! Whenever they do arrive, I’m sure I’ll make room for them in my collection.

Ultimately, what I’m looking forward to most with this army is just getting back to gaming in person and going to events with my friends. As the overwhelming bulk of this army has been painted during the pandemic, very few people have actually seen them in person! So I’m really excited to take them to the FLGS and to friends’ houses and stand around, roll dice, talk painting, and just enjoy the full experience of this wonderful hobby of ours.

The name plates on the Characters and Dreadnoughts were supplied by Versatile Terrain. I can’t imagine the army without them.

If you’d like to see how I’ve painted this army, I have tutorials covering nearly every aspect of painting the army on my Patreon page. Full access to over 250 video tutorials is only $6/month!