When Kill Team 2.0 was initially announced I was incredibly excited for it. I had been a big fan of 1.0 and was eagerly looking forward to an improved version of it. Unfortunately this eagerness turned to disappointment as I bought the Compendium and played my initial matches. While I had many complaints a lot of it boiled down to hoping for a game closer to Necromunda than what we got. Of these complaints, my biggest was just how generic the Compendium Teams felt. Nearly a year has passed since this rough start, and Kill Team has become one of my favorite games, however over half the available teams still haven’t received an update. With this in mind I figured it would be good to revisit these teams, and do a deeper dive on what they bring to the table, and give advice on how to best employ them in a competitive environment.

Welcome, reader. Do you like a challenge? Do you enjoy stalking through the jungle and hunting your prey down like a Predator? Do you eat your kills to absorb their knowledge and favorable genetic traits? Are you OK working with metal models and rules that are updated about as often? Then a Cadre Mercenary Kill Team may be for you.

Kroot in Kill Team are a hybrid ranged and melee horde team whose operatives are slightly more durable and lethal than your standard guardsman. They pay for this with a near complete lack of special weapons.

The Kill Team 2.0 Compendium surprised us by containing rules for Cadre Mercenary teams that consist of Kroot mercenaries. Kroot are a horde team with melee and ranged capabilities that tend to rely on cover.

Your team can only include up to 4 Kroot Hounds and one Krootox, and the Krootox counts as two operatives. Nice and simple. This makes building your roster pretty straightforward, and your only real decision is going to be how many Kroot Hounds you’ll want to take in a given game, and usually that number will be at least two (but probably not four).

While Compendium teams tend to lack team-wide abilities like Blooded or Cult Ambush, their data-sheets often share traits and special abilities. In the case of Cadre Mercenary teams, all operatives aside from the Krootox have the Master of Camouflage ability.

Kroot also come with the “slightly tougher than a human” statline of 8 wounds. This is a very important threshold in Kill Team as very few melee weapons deal 8 damage, meaning your Kroot will almost always be afforded the chance to either Strike back at an attacker, OR potentially survive with a parry. Additionally, this means your opponents will often require an extra successful hit with most lasgun/boltgun equivalent weapons to incapacitate a kroot versus a human. Finally, all Kroot operatives have similar shooting and melee profiles, with +4 hit/wound at 3/4 damage on the former, and +3 hit/wound at 3/4 damage on the later, being the commonalities with minor changes depending on the operatives speciality.

While this operative is in cover, it has a 4+ save. This is excellent as it goes a long way to offset the Kroot’s standard 6+ save, and in most situations will make them more durable to shooting attacks than most other horde teams.

Your standard operative, with a Kroot Rifle and blades. You’re going to be bringing at least 7 of these guys, and one is going to be your leader, who comes with an extra wound and +1 to hit over the rest of the team. Armed with basically a boltgun, and roughly equal to an unarmed Space Marine in combat, these are a decent step up from a standard Guardsman considering you could potentially take 13 of them versus the 14 operatives generally available to other horde teams.

A Kroot Carnivore that can’t take equipment and trades in its gun for +1 attack and Rending. However the twist here – and it’s a BIG twist – is that the Hound can move eight inches as opposed to the standard six. In fact, this ability is currently unique to the Kroot Hound as no other operative in the game can move this quickly. This makes the Kroot Hound a fantastic melee option, since they can move a full 10″ when charging, covering huge amounts of ground and catching opponents off-guard.

Ok, this guy is the BIG outlier for the team. Coming in at a whopping 16 wounds, 4+ Save, and 3 APL the Kroot have access to a specialist that is nearly equivalent to a Custodian, and only uses 2 operative slots. He has both strong shooting and melee profiles with +4 hit/wound, 5/6 damage, and Rending on the former and +3 hit/wound, 4/6 damage, and Brutal on the latter. In a surprising twist the Krootox is superior to almost every other specialist operative that takes up the place of two generic operatives (E.G. Traitor Ogryn, Wyrmblade Sanctus, etc) that we have seen introduced since the Compendium’s release. 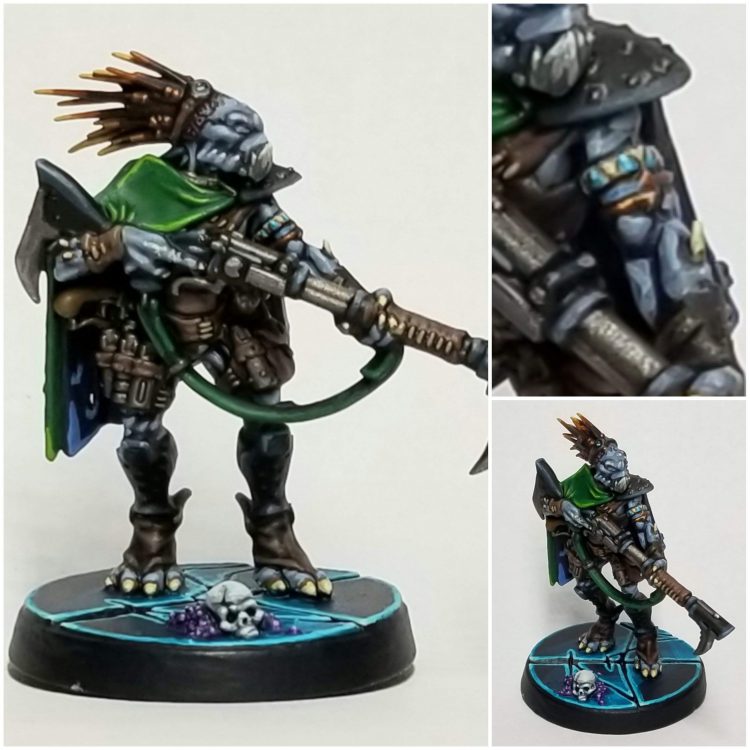 Kroot actually have a surprisingly strong set of ploys. While there are a few that are operative specific, you’re either always or almost always bringing all the operatives anyways. It also helps they’re all priced at 1 CP.

Until the end of the Turning point each time a friendly operative performs a Fight Action, in the Roll Attack Dice step of that combat you can re-roll one your attack dice. This is just a solid standard Ploy; Cadre Mercenary operatives all hit/wound on a 3+ in combat, so this ploy just serves to ensure they get as many hits in as possible. It isn’t something you’ll necessarily use every Turning Point, but it will likely be a decent option in any turning point beyond the first. C+

Until the end of the Turning Point, friendly operatives can perform a charge while they have the conceal order. Very straightforward, and excellent for keeping your operatives alive, especially when used with Kroot Hounds. B

Until the end of the Turning Point, friendly Kroot Carnivores gain the Fieldcraft (1 AP) action to change their current order. While this initially seems powerful it is greatly limited by the fact that your operatives have 2 APL. This would be most useful in situations where you wish to shoot with your operatives, but not have them move, specifically operatives holding objectives. That said, you are unlikely to use this Ploy simply because you will be spending your Command Points on other Ploys. D only because you have better options.

Allows operatives to change their order during the first Turning Point. Basically Cult Ambush for the Kroot. This is an excellent ploy that allows you to start your entire team under the Conceal order, and switch according to your opponent’s moves. This synergizes especially well with Patient Stalkers. B

Use this when an operative incapacitates an enemy operative in combat. That operative regains up to D6 lost wounds and gains 1 APL. This is a great tactical ploy. Not only can it negate the damage your operative received in combat it can provide them the ability to perform a Shoot Action or a Mission Action if they are on an objective. This doesn’t have any value on Kroot Hounds, but on an Carnivores you’ll want to make sure your last action with them is the fight action so when you get the extra APL it applies to their next activation. A

Allows the Krootox to ignore Light Terrain and other models when making a Normal Move, Dash, Fall back, or Charge Action. Another good ploy that is simple to perform. The Krootox is an incredibly deadly close combat operative, and this ploy can do a lot of work opening up unexpected avenues for a successful charge. B because it can only be used on a single operative.

The Kroot equipment unfortunately alternates between Excellent and Useless. The downside to this is that there isn’t anything here to make up for the team’s shortcomings, but the plus side is that selecting equipment is rather straightforward.

One word. Why? A Kroot Rifle that does 1 less damage on crits, and gains the Silent, Heavy, and MW1 traits. This thing sucks, primarily because of the heavy trait, even without it this would only be a small upgrade for 3 EP. F

Essentially allows the bearer to ground activate with any operative within 3 inches when it activates. Simply a fantastic item. Being able to activate multiple operatives at a time is one of the best abilities in Kill Team, especially in the case of this item as it can be used EVERY turning point, and can be used in conjunction with the Krootox. One of the best options in the entire game. A

A solid upgrade over the standard melee ability of a carnivore granting +1 Atk and +1 critical damage. Slightly better than most melee upgrades of this sort, but also more expensive. C

The hunting rifle, if it had Blast 1, Balanced, and Range 6. More of a sidegrade than an upgrade. D

Grants operatives the Bolas (1 AP) action that reduces an enemy operative’s APL by 1 if they’re within 6 inches. However, to perform this action you must roll 3D6 and surpass the target’s wounds characteristic. This element of randomness unfortunately makes this equipment rather useless. Another “what were they thinking?” item as you’re basically spending an action to have a chance to STUN the enemy. F

Cadre Mercenaries gain access to Seek and Destroy, Infiltration, AND Recon, which compared to other kill teams is an impressive range to draw from, and thanks to their decent lethality, numbers, and speed all of those are worthy options for them. Personally I recommend Infiltration, especially with an eye towards Implant and Behind Enemy Lines, while I see Seek and Destroy as the weaker category simply due to the team lacking any weapons with the AP or Indirect traits.

Thanks to the simple nature of this team you are going to want 7-9 Kroot Carnivores, 1 Krootox, and 2-4 Hounds with the Sure-Footed Charm on your leader and Skinning Blades on your Carnivores. While still lacking compared to non-Compendium Teams, this is a strong choice for Compendium users.

That wraps up our look at Kroot Kill Teams, which are surprisingly solid as far as teams go and one of the more interesting Compendium options. They’re not competitively strong or anything, but they’re likely to surprise an opponent or two. As always, if you have any questions or feedback, drop us a note in the comments below or email us at contact@goonhammer.com. Otherwise, good luck – you’re going to need it.