Bathe Your Blade in the Blood of Your Foe: It Owns

I am not a particularly clever man. Choosing secondary objectives in 40k can often feel to me like throwing blunted darts at a dartboard in the cash-only Communist themed bar I spent much of my early 20s frequenting. I fumble and stumble and occasionally hit a bullseye with a well-picked Engage on All Fronts, but at best I usually only choose two attainable secondaries of the three allotted.

Typically, when something is considered an “auto-include”, “auto-take”, or “dominant strategy” I avoid it at all costs. Going with the crowd is not something I have ever been particularly fond of, and anything that homogenizes a play experience is something I wish to avoid. See also: netlists, netdecks, or other netnouns yet to be defined. However, sometimes an option speaks, no, screams to me at a volume that I cannot ignore – no amount of wax blockage or density of earplug can wholly shut it out. Sometimes, something touches me on a spiritual level and I simply must engage with it. Today, that nebulous thing is a solitary perfectly named secondary objective:

Bathe Your Blade in the Blood of Your Foe

This objective is simple: You nominate one of your characters, and your opponent nominates one of their own. If you kill their character, that is 5 points. If you do so in melee, that is a further 5 points. Finally, if you strike the killing blow with your nominated character, that is 5 more points on top of the rest. There is a middle school purity in this objective: your dude kills their dude for a secondary-maximizing 15 points, with partial credit readily available.

I have been playing Black Templars since 2017. I was amongst the first to play the newest iteration of Black Templars when I reviewed their army box for this very website. My lower-case-c crusade sits at about 4500 points at time of publication. I own the gag gift all-over print faux-silk button down Black Templars shirt that smells like gasoline and feels like television static. I won three medals at Adepticon 2018 with my all-small Black Templars army. I hope these are sufficient bona fides to let you know: I’m kind of a Templar guy. Not in the problematic online LARPer sense, but in the sense that I like painting these very bad men and their very good models then pitching them to victory and/or defeat on the tabletop. With that in mind, let me be circle ever slower back to the point of this article:

Bathe Your Blade in the Blood of Your Foe is the most Black Templar objective in the entire game. I am yet to play a game where this objective was available to me where I did not choose it. It has become that previously maligned auto-include, but not by the merits of a greater community of savvier minds than my own – purely by its death metallic naming convention and chocolate and peanut butter-level fusion of lore and mechanics on the tabletop.

Sigismund was the first Emperor’s Champion, a duelist par excellence who would strike down the strongest of the Imperium’s foes in single combat, except for the one time he didn’t. He was also, as it turns out, the first High Marshal of the Black Templars. Dueling is at the core of the chapter’s posthuman DNA, and Bathe Your Blade in the Blood of Your Foe exemplifies this. While Sigismund is long dead, The Emperor’s Champion lives in on the generic store brand version:

This particular cruise missile that walks like a man might not be able to solo every character in the game, but he can certainly solo a lot of them. This Toasted Oats Cereal of a murdermachine caused 18 wounds in one round of combat to my friend’s tooled-up Archon last game we played. Chocolate Sandwich Cookie over here solo’d Belisarius Cawl in one of my first games of 8th. I’ve leveraged Honorable Brother Strawberry Toaster Pastry against everything from Warbosses to The Silent King and he’s either bested them or come perilously close. With his track record and character-killing abilities, not only is he a shoe-in for most of your lists, but he’s an exemplary candidate for Bathe Your Blade in the Blood of Your Foe. He’s the most Black Templar unit, tailor-made to accomplish the most Black Templar objective. He’s priced to move at a cool hundo points, and there’s precious little that can deal with him at smaller point sizes.

To belabor the point yet further, he has a boatload of special rules to pump him up when fighting enemy characters. Your opponent will have to deal with a 6 attack blender that fights first with either S+3 AP-3 D2 attacks or Sx2 AP-3 D3 attacks at a -1 to hit. This of course is ignoring the further AP-1 from the Assault Doctrine (which will likely be active) and the luck of the dice (which will all be rerolled), or even your Chaplains yelling at him to fight better. Opposing characters also have a -1 to hit him, and he has a respectable 2+/4++ should something survive the first round of combat. This isn’t marketing speak telling you this guy kicks ass and chews bubblegum and he’s all out of gum, but demonstrable proof he never had any gum to begin with.

The Takeaway, Or 15 Points In Your Pocket 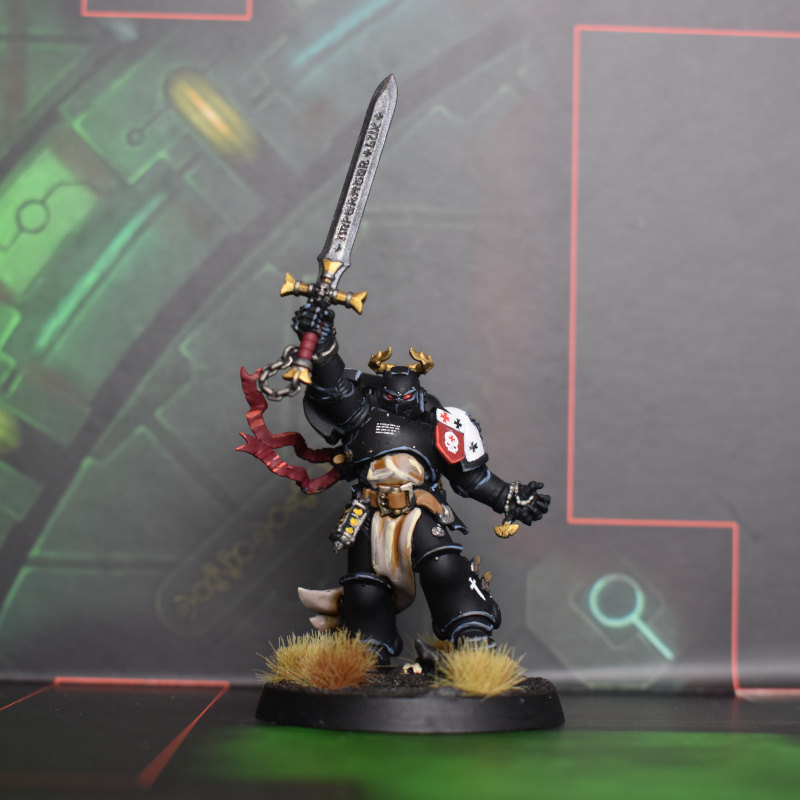 You might not score Bathe Your Blade in the Blood of Your Foe every game. However, merely by attempting it, you are submitting your threads to the tapestry that makes up this fine, fine objective. Even in failure you are attempting something noble, brave, and most importantly, cool as hell. Narratively? It’s what the Black Templars and their champions would be attempting every single battle. Competitively? It’s a trivial 5 points, a simple 10 points, or an attainable 15. If you have not yet tried it and you find yourself in possession of a Black Templars army, give it a go in your next game. It is by no means limited to The Emperor’s Champion, and is absolutely attainable by anything from a humble Castellan to High Marshal Helbrecht – I merely used The Emperor’s Champion as the vector for my thesis. If my bowling ball-smooth brain can comprehend and accomplish this objective, yours certainly can.

The only disappointment to be had with Bathe Your Blade in the Blood of Your Foe is that, to the best of my knowledge, no metal band has yet taken it as their namesake. It is a name at least as good as …And You Will Know Us by the Trail of Dead with the benefit of not including ellipses in the title. If you are intrepid and talented enough to do so, I will buy your album, and I will listen to it. I will pay one dollar per victory point I intend to score with this objective in a single game, so if you want my fifteen dollars, you know what you have to do.

Have any questions, feedback, or a self titled thrash metal EP? Drop us a note in the comments below or email us at contact@goonhammer.com.