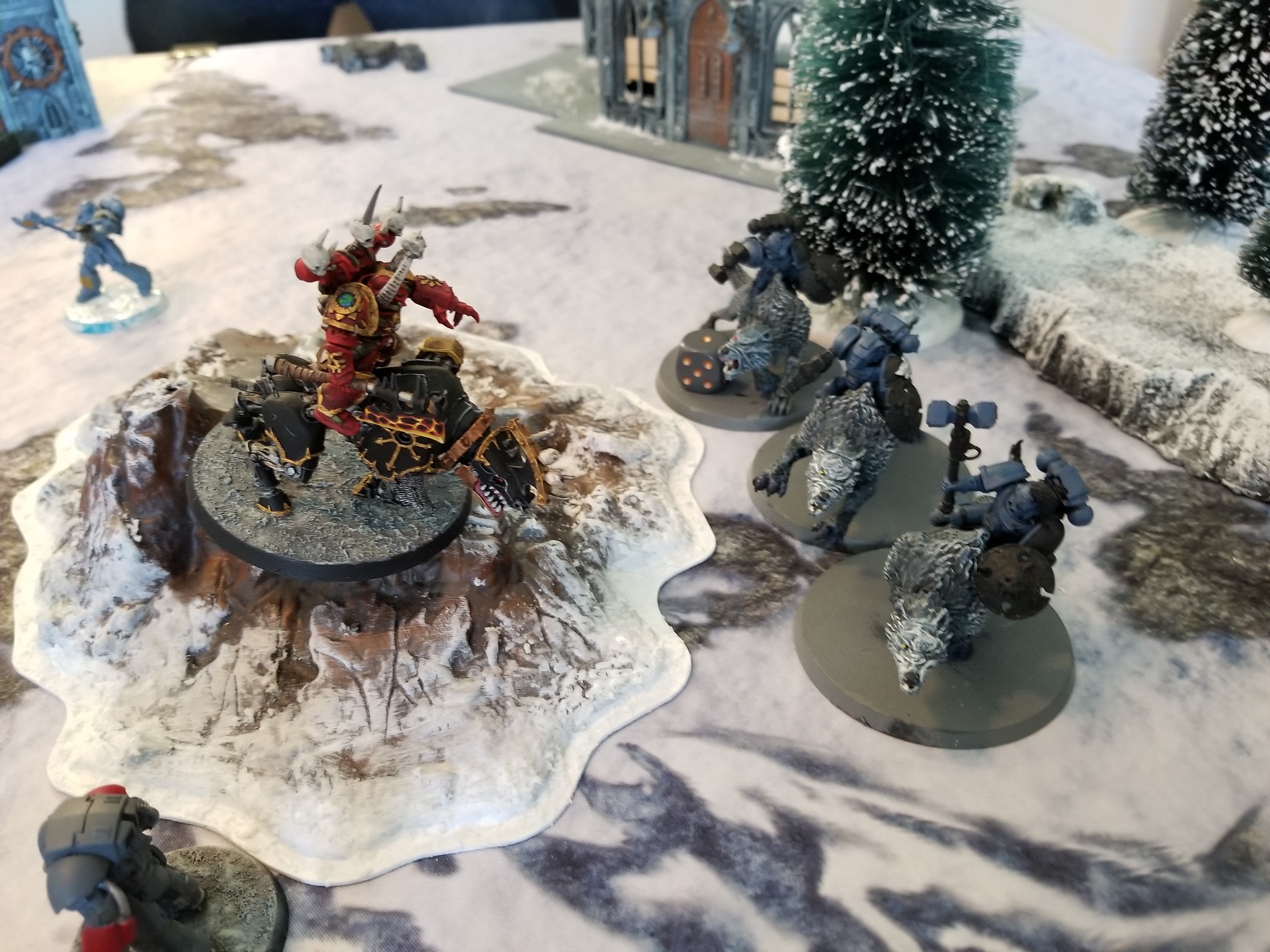 A lot of really salty, bitter 40k gamers will tell you dumb things like “combat in 8th edition is no good” and “it’s too hard to murder things with axes” and “World Eaters are bad” but I’m here to offer definitive proof that all of that is bullshit. World Eaters own, combat owns, and killing things with axes has never been easier. Let’s dive right into the details in my latest B-B-BATTLE REPORT.

Having discovered that fellow goon theKingsl4yer and I only live about 30 minutes from each other, we finally organized a game of 40k, hosted at my place. The game was 2,000 points, and having agreed ahead of time to make it a semi-casual affair, I chose to dust off my World Eaters and do some good old-fashioned melee.

The strategy here is pretty simple: Punch everything off the fuckin table. Keep Kharn more than 1″ away from my guys in combat so he doesn’t pulp them in his fervor, and use the two rhinos to soak up OW fire before bit charges. If there are any big vehicle targets, then the Bikers will use their meltaguns to threaten them, but miss spectacularly every time they shoot. I got two of those bikes painted up this week just for the game.

We did Maelstrom of War. The Mission was Recon, which is notable in that it requires you split your army into three equally-sized (in unit count) portions. One randomly comes in turn 1, while your remaining units arrive either on T1 on a roll of a 3+ or on T2. I figured I’d break out the speediest chunk as one group — Heldrake, bikers, Juggerlord, and the Dreadnought. Those ended up being my initial deployment, and Kingsl4yer started with the primaris marines, long fangs, both dreadnoughts on the table. We were playing the new FAQ rules, so he chose to deep strike the Interceptors, who’d have to wait until turn 2 to enter. Deployment map was Dawn of War (the one where you deploy on long edges up to 12″ in). I won the roll for first turn. 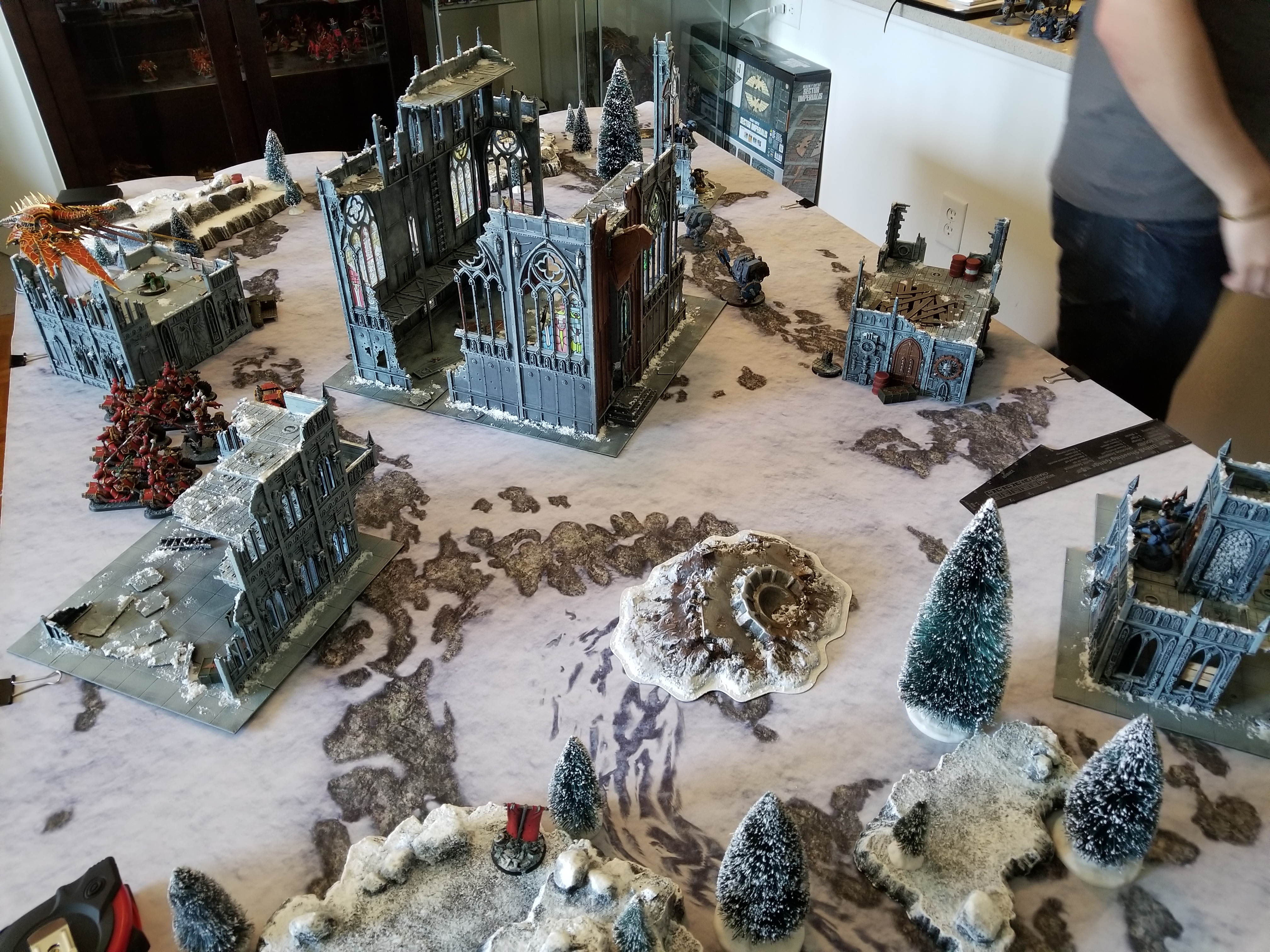 My strategy was pretty simple: Rush up and beat the shit out of things. The Maelstrom though, she’s a harsh mistress, and she had other plans. Turn 1, she throws two cards at me: Priority Orders Received, with the mission of capturing Objective Marker 1 (it’s there in my deployment zone on that building on the left) with my Warlord, and Hold the Line, which tasks me with keeping 3 units in my deployment zone. Neither was possible to score on turn 1, and Using Kharn to score the Priority Orders would mean keeping him from fighting for two turns. UGH, FINE. Turn 1 is pretty uneventful; I only kill a couple intercessors, but then Kingsl4yer charges his Wulfen Dreadnought into my Bikes on his turn and eats a few wounds to Overwatch and another few in combat and I use the Khorne Strategem to double fight and finish it off to claim First Blood. My reinforcements that show up are Kharn and his Rhino and the Land Raider full of Terminators. Kingsl4er gets help on his turn from his Terminators, Wolf Priest, and two Razorbacks full of Grey Hunters. He decides to deep strike the Terminators and Wolf Priest, so by the new rules, they gotta wait another turn to drop.

Kingsl4yer used the new Prepared Positions Stratagem to get cover his first turn, but it didn’t really matter much. He might have been better off not using it, since only his dreadnoughts got the benefit, and one had an invuln save anyways.

So reluctantly, I opt to drop Kharn out of his rhino and use him to capture the objective. It sucks, but 4 VPs is 4 VPs. Kharn hangs back while his Rhino full of Berserkers plows forward. The Cultists and the Other rhino arrive, and that puts 3 units in my deployment zone to score Hold the Line. Now we’re cooking. The score is 5-0 and I’m ready for blood. Drunk on the easy high of a quick hit of easy victory points, I charge my rhinos and Heldrake into the aggressor squad.

This was a mistake. Did you know that Aggressors have T5 and a bunch of fuckin powerfists? Yeah, they apparently do, and they’ll wreck your bike shit pretty quick. So I did that, lost a few bikes, and only killed two of the three Aggressors. That was really bad because it meant I was stuck there while Kingsl4yer’s Thunderwolves arrived to hit my bikes in the face with hammers. What saved me was that his drunk-ass space wolves showed up bombed out their minds, and whiffed on most of their hammerblows. The good news is that I was able to fall back the following turn, so they could chase me and hit me again.

While Calvary clashed on the north end of the table, Dreadnoughts dueled in the large church in the middle of the board. And by “dueled” I mean “my Helbrute punched a hole clean through the middle of Kingsl4yer’s idiot Venerable dreadnought, then got blown to pieces by lascannon and plasma cannon fire the turn after.” Oh well. Killing another dreadnought and eating a turn of heavy weapon shooting is pretty much the best-case scenario for a double-CCW Helbrute most games, so I’m still pretty happy with this performance.

I was riding high coming into the bottom of turn 3 with 8 Victory Points to Kingsl4yer’s 3, but that was mostly because his reserves hadn’t done much yet. He’d dropped his Wolf Priest, Arjac, and Terminators into midfield and his Interceptors into my deployment zone, using them to chip some damage off my land raider before charging it with Arjac. Ready to duel, I emptied the land raider of terminators, then fell back with it so it could pick up Kharn and shift him 6″ on the following turn. Then I charged the Wolf Guard with my terminators and cultists, only to have the Wolf Priest use the armor of Russ to force them to fight last, so two of them died from being power fist-punched in the dome before they could fight. The remaining three killed the wolf priest to score me Slay the Warlord.

This was a punchy game, with lots of back-and-forth. My lead quickly dissolved as Kingsl4yer used his Grey Hunters to score a “Defend” objective, used his interceptors to force my cultists to fail a morale test, and killed a unit to score 4 VPs, dropping my lead to 2. Those fucking Thunderwolf Cavalry continued to put in work, charging after my Heldrake and literally hammering it out of the sky.

THE MILLER LITE ICE COLD PLAY OF THE GAME

When the Land Raider fell back and left Arjac open, that cleared the way for the Chaos Lord to charge in. Dodging the hammer thrown in overwatch, he landed 7 hits with his power axe and 3 with his juggernaut, dealing the 5 wounds needed (props to Kingsl4yer for rolling like shit here), and dumpstering Arjac’s Thrift-store Thor-wannabe ass. Remembering that Arjac was a character, I immediately opted to use the CHAOS BOON stratagem, spending 1 CP to roll on the Boon table. The result: 9 – Cosmic Fate: Add 1 to all saving throws made for the character. That would end up being a major deciding factor as my Chaos Lord used his brand new 3+ invulnerable save to shrug off 5 thunder hammer blows fighting Thunderwolf cavalry, stymieing their advance and holding them in place until Kharn could arrive to murder them.

Speaking of which, see Kharn over there? ‘Ole Mister “KILL MAIM BURN” finally made it into combat, wiping out the remaining Wolf Guard Terminators and 3 Thunderwolves en route to cleaning up the right flank of the table. He almost cost me the game at one point though, when he killed two cultists in combat and almost took them off an objective they needed to claim. Fortunately they passed their morale check and the Land Raider wiped out the Interceptors with some good lascannon shots, giving me control of the right side of the table.

On the left side of the table, the Berserkers dropped out of their rhinos and took out a squad of Grey Hunters and a Razorback, netting me +1 point for Big Game Hunter. Then they got wiped out by Razorback Assault cannon fire to score Kingsl4yer a victory point. With the mission calling for Variable game length, we roll at the bottom of turn 5: 1, the game ends and the World Eaters are victorious, scoring an extremely narrow 10 – 9 victory. The only thing that saved the tie was Kingsl4yer pulling bad cards on the final turn and his inability to kill Kharn, who finished the game with 1 wound remaining.

This game was a blast. Kingsl4yer is a swell dude, and was fun to play against. The game was really tight despite the initial lead, with lots of back-and-forth and some sweet unit-on-unit violence. It had Bikes fighting Thunderwolves, Thunderwolves fighting Juggernauts, Rhinos fighting Razorbacks, Dreadnoughts fighting Helbrutes, and Terminators fighting Terminators. In the end, The World Eaters’ superior number of attacks due to their legion trait and Death to the False Emperor were the edge I needed, frequently giving me insane numbers of attacks. Oh and also Kharn fighting twice per turn. That dude is such a hilarious monster.

All in all, this was one of the most fun games I’ve played in a while, and I’m glad I decided to go super-punchy. I don’t know if this is a list that would hold up in most other games, but I’d certainly consider playing it again. It’d be cool to see how it plays when I don’t have to devote 3 turns of Kharn to capturing one objective. I also wouldn’t make him my warlord again–his warlord trait wasn’t relevant, and it’d be better to give an extra attack to my Juggerlord.

Also holy shit Chaos Boon being the difference-maker was completely unexpected and hilarious. The Chaos Gods definitely smiled on me today!