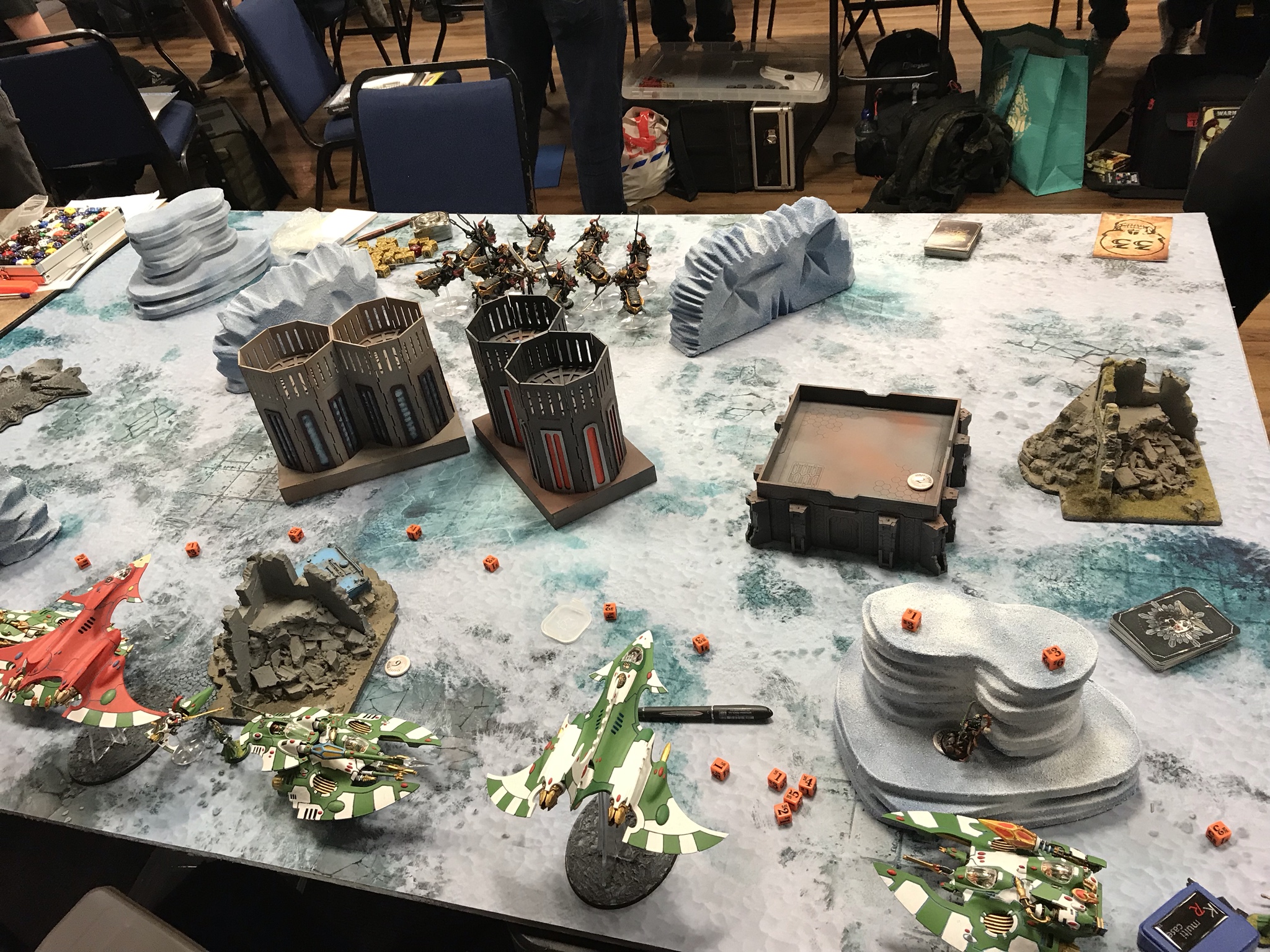 Welcome back to part 2 of the exciting chronicles of a ham slam in Birmingham. Sorry.

When last we left, The Flock, my 15 lovingly painted Haywire Scourges, had just claimed their first victims. Hopefully next round would let me get more legwork out of them considering the absurd amount of effor that went into turning them around in time for the event.

Another army with no vehicles. Naturally. 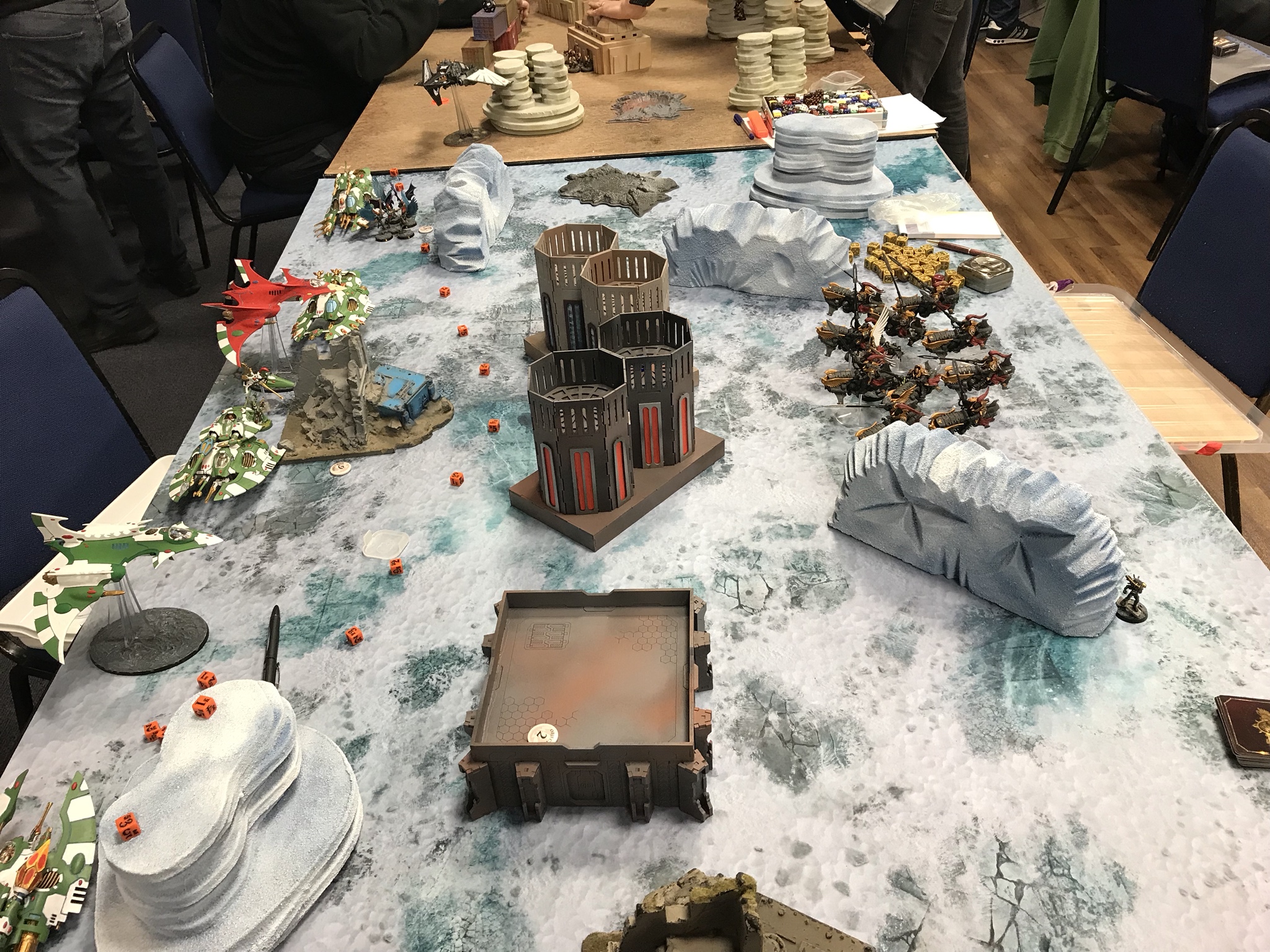 The good news is that I’ve played this matchup a *lot*, as one of my playtest buddies mains it, and can practically do it in my sleep. It’s also not the best version against Eldar – against Eldar, there’s pretty much nothing you’d rather have than “more basic bolter bikes” beyond the first Culexus or a guard farm – none of the additional stuff here was scarier to me than another few bikes would have been. I set up my forces >27″ away from him, one bike squad was in DS and we rolled off for first turn, and I took it.

That turned out to be game over right there. On my first turn, I landed Doom and Jinx on one Bike squad and took it off the board (forcing Jinx through the Culexus aura with a CP re-roll), and killed one from a second unit. Hilariously, via careful positioning I also had one Culexus closest to and visible to my Dark Reapers (who obviously wasted it) and another was closest to my wave serpernts after the bikes died, and got blown away by the shields.

5 dead bikes and 2 dead Culexus before you move a model is quite hard to come back from. On his turn, everything except Celestine went after the Hemlock, while she blazed forward to try and get a kill on a Wave Serpent. Shooting scattered some minor damage around, but not really enough to make a major difference. In the charge and melee phase, Celestine took lots of wounds off a serpent, while the entire rest of his on-board army charged my Hemlock (using a 3++ SC to soak the overwatch). Obviously they killed it.

It only went and exploded.

On my turn, I reduced the board presence against me to a wounded shield captain, a Culexus and a recently re-incarnated Celestine. I also used my wave serpents to build a giant bubble around my army’s vulnerable innards, so that when the final bike squad turned up the next turn all it could really do was go after Wave Serpents. It did, and I’m pretty sure one got mauled to death, but on my turn I basically just mopped up, and we essentially called it.

My opponent was very cheerful about the whole thing, and had remembered my army from the last one, and was very complimentary about the old metal models I still have in it.

Between rounds a very bad piece of foreshadowing happened – Corrode made joking reference to the fact that I never seem to fail Agents of Vect, so it’s much better when I use it than when he does. Hmm. We would have to see what round 5 held.

Finally, a target rich environment for the Flock!

I was moderately confident going into this – Crusaders are merely “OK” against Eldar unless they high-roll on their thermal lances. In fact I’d said that very thing online only a few days before. Hopefully that wouldn’t come back to bite me.

I set up one unit of Scourges on the board and otherwise castled sensibly – I put the Fire Prism on the hexagon stuff as we’d agreed it was area terrain, and I’d calculated (correctly) that he’d likely keep his nearby knight 50% concealed from it, which would in turn mean I’d get cover on the return fire. The fire prism was the most obvious target, so I was hoping this would give me an edge. I also put a unit of scourges behind the LOS blocker to add some first strike capability if I got the first turn. This was a mistake – if I’d had the first turn I don’t think I’d have needed their help to take a Crusader off the board, and the ironstorm rockets don’t care about LOS blocking. Four rounds of those should kill 3-4 of the unit, so it was just a bit of a waste. Still, a minor thing, and I thought I could afford to lose them. The rangers deployed to prevent any turn 1 full tilt shenanigans from the Gallant. 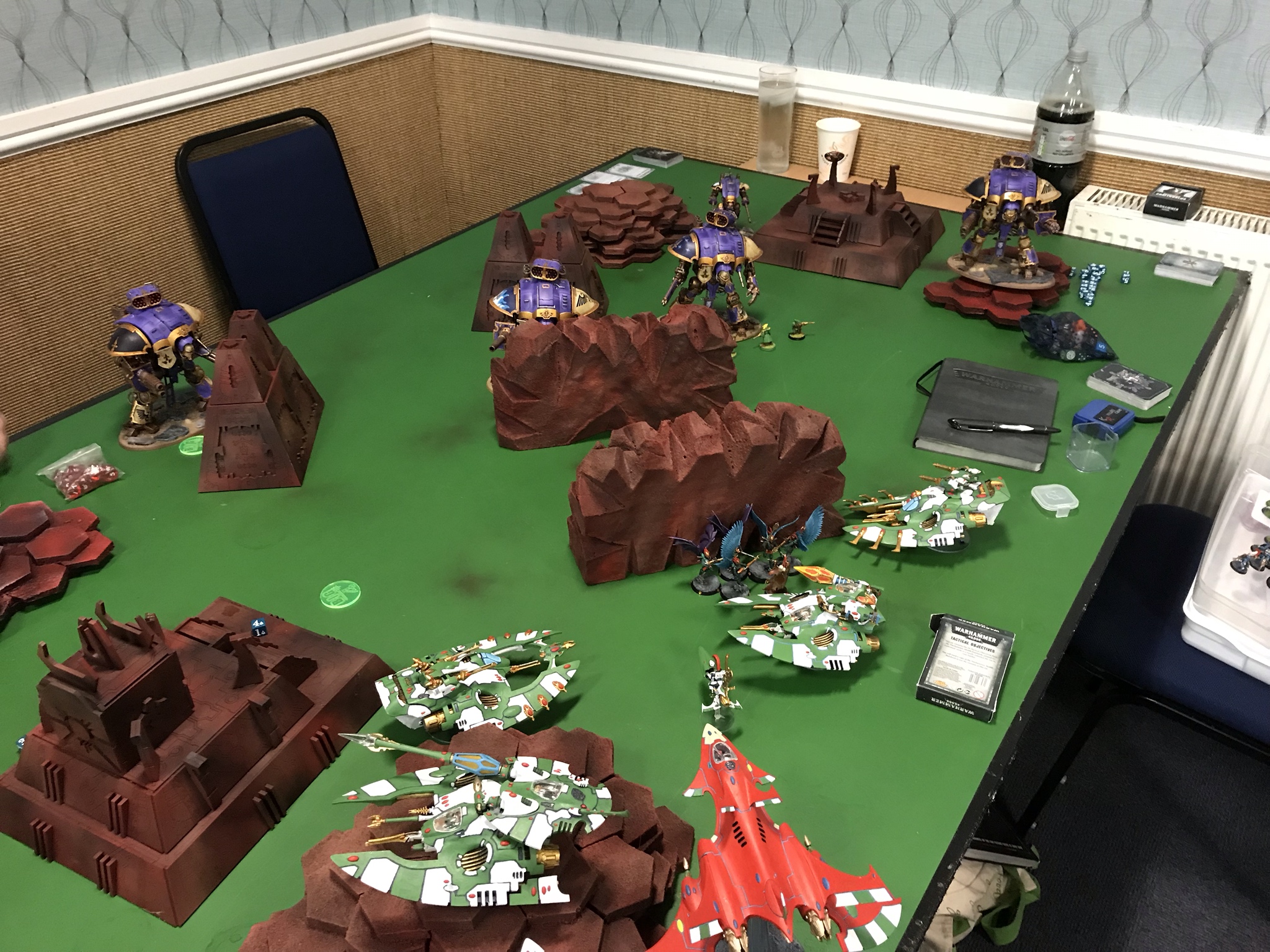 As was probable, my opponent took the first turn. and moved roughly as expected.

He started the shooting by declaring the leftmost crusader on the Fire Prism. Naturally I popped lightning fast to which his response was “yup, just wanted to bait it out so I could try and drop the Hemlock”. Average damage from a gatling and thermal at a lightning fast FP in cover is 3.6 wounds (see previous comments about Crusaders not being very good against my army).

It blew the Fire Prism clean up. The Avenger Gatling cannon scored 4 wounds (already a high roll) then he rolled 6 shots into 4 hits with the lance, got the three wounds and scored the 9 damage needed to execute it.

Next, his Endless Fury/Battle cannon one went after my Hemlock, slamming it for another high roll damage quantity of 9 wounds (average is in the ~5 region). The Helverin slammed 4 wounds into right hand Wave Serpent (average – 2), and various missiles had picked away the Scourge squad. With one Crusader left, I was thinking “OK this is bad but survivable”. The Gatling Gun on this one finally whiffed a bit, and we moved on to the Thermal Lance. Unfortunately, this high rolled for shots again, and put through 2 wounds. Still, he’d need 11 damage (after shield) to get the kill.

Naturally, he rolled a five and a six. Five guardians died in the crash, forcing me to pop the morale strat to keep them around (honestly this was a mistake in hindsight, but apart from everything else in this game I got literally 0 CP regained over a total of about 16 spent while my warlord was on the battlefield, so I was expecting to have more to play with).

Fucking ouch. I knew at the time that this was an unusually good first turn, it wasn’t until I later sat down and did more of the maths that it emerged just how absurd it was, but I still felt like this was salvageable. With the scourges able to drop in range of the left hand crusader, and the rest of my army as it was, killing that was still a reasonable prospect, and if his second turn was more normal I’d still have a decent shot of pulling it back.

I healed the Hemlock up to 5 with Tears of Isha with this in mind (pro-tip – it’s technically a Wraith Construct), and put all my threat units over to the left flank, with the scourges coming in there too. I made a mistake with my guardians – I drew defend one, so moved them onto that, whereas they should have thrown themselves towards the Gallant to bugnet it for another turn.

I landed Doom and Jinx on the Crusader and opened up. The Scourges did incredible work (something like 12 wounds between 2 squads) which is good, because the rest of my army whiffed like crazy, and in the end I *just* put it down.

It used the “shoot when you die” strategem. I used my last 3 CP on Vect. I rolled a 1. Well shit. Hold on though – technically (at least by the LGT’s ruling and RAW – apparently the ETC play this differently) you get to roll your regain dice for the CP spent before you get to the point of needing the re-roll. All I needed was one 6 on 5 dice and I’d be fine.

Well, he needs sixes to hit the Hemlock with the Gatling, that should only work out to 1-2 wounds average, and it’s out of range of at least some of his other stuff, maybe…

5 hits. 6 damage. Fucking blows it out of the sky.

That, as we say, was game boys. On his turn, my mistake with the guardians came in to bite, with the Gallant making it into the Fire prism and my warlord, killing both (prism with fist, warlord with Death Grip). Helverin profiles my CH and a decent number of Scourges die. The one saving grace is that more reapers and Scourges lived than really should have, but without the Hemlock to draw at least some of the aggro it was just nowhere near enough, especially as I hilariously low roll everything on my turn 2. The game effectively ends on turn 3 as my five remaining infantry models try to salvage some honour by downing the gallant, only tragically taking it down to a single wound remaining before being stepped on for their troubles. If I’d screened the Fire Prism with the guardians properly I might have lasted another turn, but it really would only have delayed the inevitable – and without any CP to Vect, I wouldn’t have been able to get much through the Gallant’s invuln anyway, a large proportion of the damage it took was scourges and smites. I might have got the pity kill I suppose.

At least I won a fancy dice bag for being one of the first two people tabled in the round!

What I will say – making it all five rounds, my opponent was once again a lovely guy, and made the experience of being stomped harder than I have ever been stomped at 40K before a surprisingly pleasant one.

I’m a bit sad about my performance – I think my army was better than 2-3, and it’s my worse performance at any event I’ve been to. I definitely did make a few mistakes and have some things to keep an eye on next time. I did learn from my mistakes during the event – in the Custodes game I went to put my CH in his deployment zone turn 1 and another part of my brain diving tackled my arm while screaming “noooooooooo” and stopped me feeding it to deep striking bikes.

Really, in at least games 2 and 5 it just felt like the dice were out for my blood – if the Tyrant had died when it should have in 2 I would have had a very good chance at taking the game, and the last round was just a wild ride of statistical anomalies in my opponent’s favour. I was also sad to get 2/5 opponents with zero vehicles, which was incredibly unusual in the meta.

I did, however, get five fun games against great opponents (seriously, worth saying again that I would cheerfully sign up for another game against any of them, which certainly isn’t how I felt after the LGT) out of the event, saw a cool bunch of people and won a fancy new pity dice bag, so hardly a weekend wasted.

Next big event is the Glasshammer Open on 20th October, which is almost certainly post-FAQ. Obviously that may or may not shift things around. If it doesn’t change much, the only swap I’m likely to make is:

Second unit of dire avengers in

The rangers did very little in all my games here, and in most cases nothing that some dire avengers couldn’t have done, while the latter would be much more likely to be a “going concern” at the point I need them. The guardians almost never get to shoot turn 1 anyway, and got popped out of their boat and murdered too many times for my liking.

Hope you enjoyed reading, and look for more exciting reports on October for Autumn Tides of War (1500, and I’m taking a Wraithknight!) and Glasshammer.