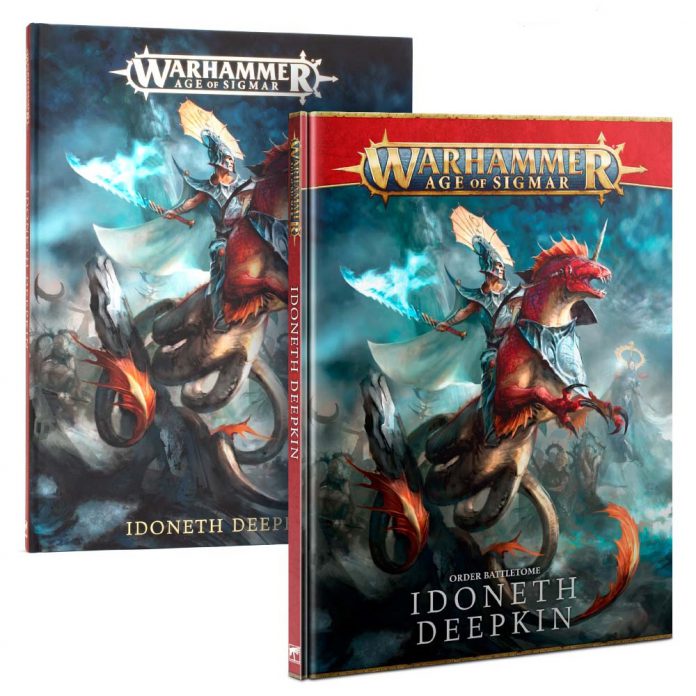 The core defining feature of the faded Aelves known as the Idoneth Deepkin is that they require a steady stream of souls, harvested from unwilling surface dwellers, to maintain their way of life. And (not to put to fine a point on it) their actual lives. Accordingly, the core feature of Deepkin on a Path to Glory is called the Quota of Souls.

After destroying a unit in melee combat you get to roll a number of dice depending on how powerful that unit was. Heroes and Monsters grant you 2d6, units with a Wounds characteristic of 3+ grant you 6 dice, and everything else gives you 3 dice. When you roll these dice every 4+ increases your Soul Quota by 1.

At the end of the game these Souls can be spent as a resource. There are a few options, but they’re all focused on mitigating injury. You can spend souls to improve your Casualty Rolls, reduce the risk of Injury, and to recuperate/reinforce hurt units. This is appropriately thematic: souls are the life-stuff of Idoneth Deepkin so it’s appropriate they’re spent on unit health.

Unfortunately, this is all they’re spent on which does make it a little boring. Psychologically, avoiding a negative is never as exciting as gaining a positive. Getting to spend Souls will save you Glory Points, which could be nice when it comes up upgrading territories but unfortunately…well, we’ll get there.

Idoneth Deepkin players have 4 unique quests to choose from.

The Shelled Colossus – This quest requires you to have a Leviadon on your order of battle. When you embark on this quest you can choose a Leviadon Mount Trait, and when you complete the quest add that trait to your vault. It can only be applied to the specific Leviadon you selected initially, so if it dies you lose that trait.

Essential Soul-Raids – A fairly standard quest that scores points for Minor and Major victories. Once complete you’ll unlock The Reaping, one of the Path to Glory battleplans. No rewards here unless you win that one so bring your A-game.

Soul Skirmish – A quick one that completes as soon as you win a Major victory. When you do, add 1 to your Soul Quota for each of your units left on the battlefield.

Fat of the Land – Again, win a Major victory and have a Soul Quota of 12 or more souls. The benefit here is rather nice; once you’ve completed it then you can heal D3 wounds to every unit on the battlefield during each of your hero phases in the next battle you fight. Huge!

Soul Harvesters – Pop this off at the start of the combat phase to increase your soul quota by 1 for each enemy model slain by an attack made by this unit. Since there is no rolling, this can give you a huge burst of souls.

Abyss Dwellers – After charging you can use this to grant your unit the benefit of the High Tide from the Tides of Death. This grants it Strike First and the benefit from the appropriate Ritual if you chosen it. This can really screw with your opponents plans if used right.

Tsunami Strikers – Turns any melee hit rolls of 6 into two successful attacks instead of 1.

Flash-flood Militia – Just like Abyss Dwellers but you get access to Flood Tide (and the Ritual, if active) allowing you to shoot or charge after running.

Summoners of the Gloomtide – Now we’re talking! Straight up summon an entire Gloomtide Shipwreck onto the battlefield more than 3″ from objectives and terrain. Is this useful? Not sure, the positioning could get in the way but the ability to just plop terrain that grants 5+ ward saves could be legit. Also it’s just cool, so do it.

Ritual Practitioners – This grants the Tidecaster’s ‘Master of the Ethersea’ to this unit. This means you can activate 2 rituals instead of 1 at the beginning of the battle. This doesn’t do anything if you already have a Tidecaster, but if you need to leave it at home access to this ability is nice.

Crescendo of Crashing Waves – The Deepkin player is launching a soul raid at a unsuspecting village! The defender player’s deployment zone is the entire map, while the Deepkin raider must enter along one of the long edges and attempt to either slay their opponent entirely or push off the other side of the map. Units removed along the Exit Edge are not slain. The Defender has a few tricks, however. A die roll for each Deepkin Unit on the battlefield represents the efforts of harrying ambushers and will reduce movement or prevent shooting! If the Deepkin player wins they can add a unit to their Order of Battle

The Reaping – This is your Quest Reward battleplan, and opens with the defender controlling a strip along the center of the map, designating one short edge as the Settlement Edge. Objectives represent groups of civilians that will move towards the Settlement if enough defenders are nearby or run away from the Deepkin. If enough Deepkin surround them, those civilian’s souls are gathered by the invaders! A win allows you to set the casualty score of a unit on your Order of Battle to 0.

Three Warscroll Battalions are provided. They basically boil down to “The King and his Bros”, “Mounts”, and “Footsoldiers” and all gain the same ability, which is a good one. While affected by the High Tide (remember there are a lot of tricks to gain this), each unit in the Battalion gets to roll a number of dice equal to their charge roll and deal 1 mortal for each 5+.

And now we come to the Deepkin Territories. The Core Rulebook released with a note that subsequent publications would add faction specific Territories. We’ve seen these in White Dwarf and other Battletomes and they inject a good bit of flavor to the ruling faction. Here, unfortunately, they’re a bit of a let down.

The Pitch Black Abyss – “This territory cannot be controlled”. Yeah, it’s literally a do-nothing zero effect, blank. I guess when you roll a 61 you just go pick a Core Rulebook territory.

Concealed Whirlway – “This territory cannot be controlled…”. Wait what?! “…but you can pick any other territory from this table to control instead”. Ok…so at least it’s something.

Undersea Volcano – OK now we’re talking. Once upgraded (10gp, and remember Deepkin will have more GP thanks to their Soul Raids) during deployment you can set up 1 friendly unit in reserve and deploy it more than 7″ away from enemy units. An excellent sneak attack!

Deserted Island – If you win a Major victory, you’ll gain an extra quest point on a roll of a 3+. Not helpful for the Deepkin specific quests, but nice for others.

Seamount Overlook – This ability allows you to subtract D3 from the cost of upgrading a territory and once upgraded lets you make 2 exploration rolls instead of 1.

Chorrileum Plateau – Once upgraded, you can add a flat 3 to your Soul Quota.

I have been very excited for the new Deepkin book. I am primarily a narrative player, slowly painting my Deepkin in preparation for their Path to Glory. I’m certainly glad it’s here, the core updates are strong and I like the quests and veteran abilities. However, I am a little bummed by the Soul Harvest and territories. Spending to avoid negatives isn’t super exciting, and while the GP savings will be nice until we have more supplement books my excitement is tampered just a bit. I’m also very disappointed in the territories. Having one that is straight up a blank and another may as well be is baffling. These two elements come off as a little half-baked, I truly think a bit more could have been done here.

It does lean in to the flavor of the Deepkin, however, which is ultimately what you want. Reaping souls is a huge part of their lore and this leans hard into gaining souls and getting abilities that make it easier to get souls. Both battleplans seem fun and exciting, and I’m looking forward to launching my campaign!