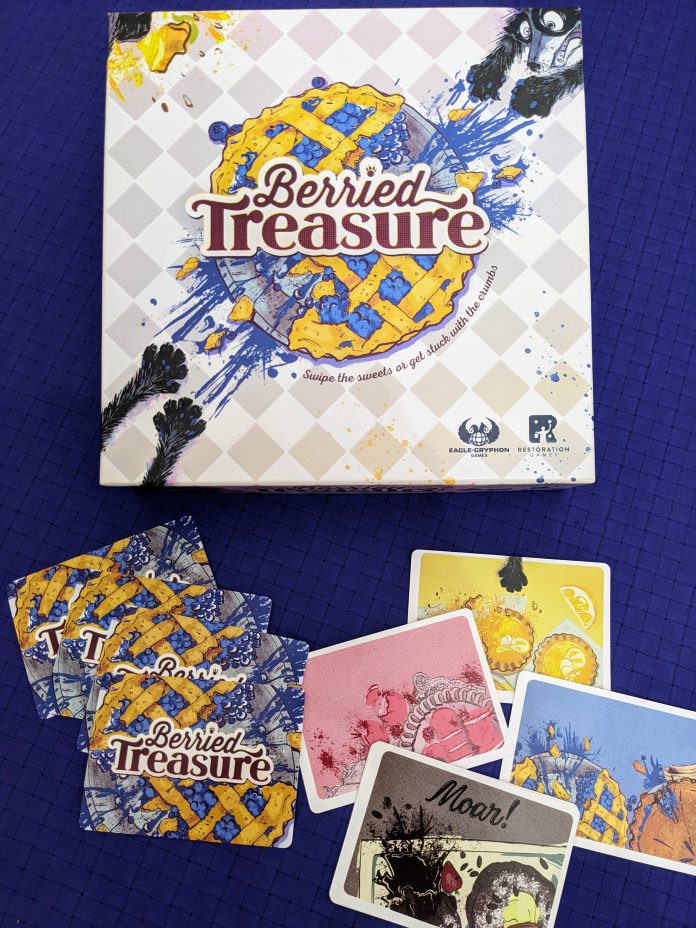 The folks at Restoration Games are ludo-archaeologists. They recover beloved, out-of-print board games, retcon and restore them (natch), then re-release them for the modern game player’s sensibilities.

Some Restoration discoveries are as mythic as the Holy Grail – as in literal “grail games” like Fireball Island and Return to Dark Tower, which both went supernova on Kickstarter and made strong cases for nostalgia being an addictive and powerful source of unlimited, renewable energy.

Not everything on Restoration’s slate is as capital-E epic as those 80’s blockbusters. They make space for lesser-known “indie” prestige titles too – like Berried Treasure, a reboot of Sid Sackson’s first-ever published board game. A long-lost and instant Sackson classic, unearthed sixty years later? Buried treasure, indeed. Berried Treasure is a perfect dessert for game night. Even if you prefer to eat dessert before the main course.

Previously known as Buried Treasure (yarrrr!) and High Spirits with Calvin and the Colonel (an obscure Saturday cartoon tie-in), Berried Treasure is the definitive version. In it you’re raccoons or other furry fiends that have breached a bakery and must make haste to heist the most treats you can gobble (for points) over three rounds of thieving.

Four different color-coded baked “treasures” (suits) comprise the 60-card deck: Blueberry Pies, Raspberry Macarons, Mocha Lava Cakes, and Lemon Tarts. Some cards have added effects illustrated on them such as grabby critter paws or the word “Moar!” in textbook I Can Has Cheesburger-ese. 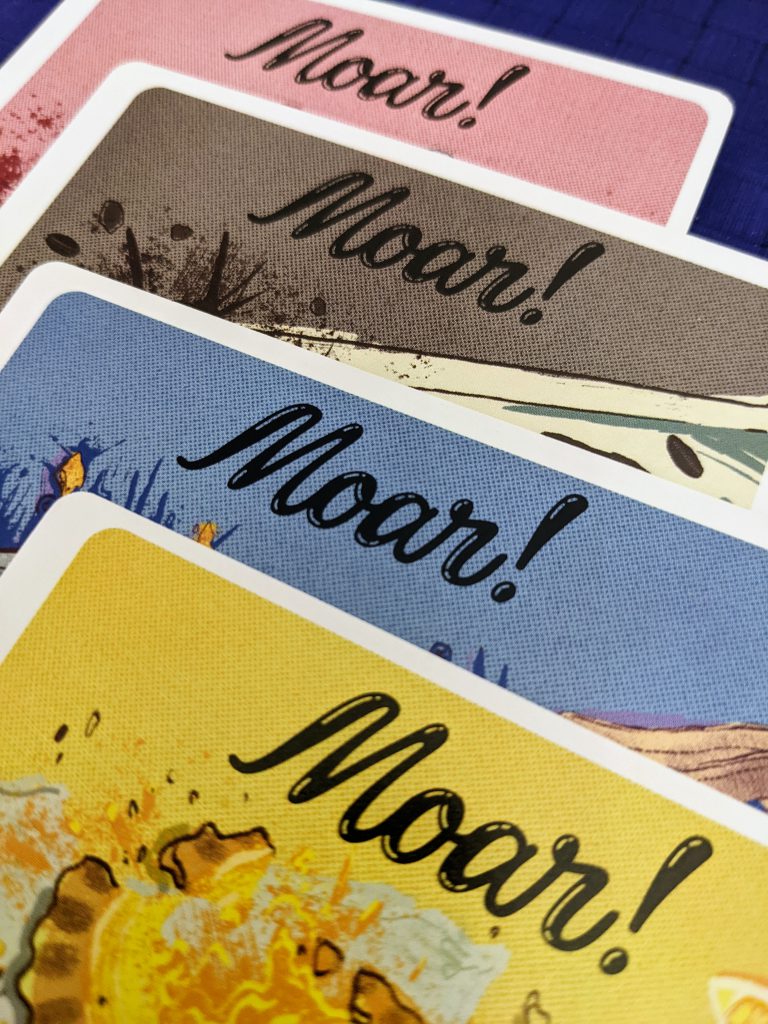 Each round 20 random Treasure cards are splayed face up on the table (aka the cooling racks) into four rows of 4-5-5-6 cards per row. On your turn you take a card from the (open) end of any row. Cards tucked under other cards in these splayed rows cannot be removed until exposed or uncovered by the cards covering them. Cards you take create sets face up in front of you, organized by suits.

About those special effect cards:

Moar! – these let you immediately take a second card of the same suit as the Moar! card (if it’s legally available to do so). You ignore effects of the bonus card you gain (aka no chaining).

Grabby Paws – for cards with one or more paws on it, select another player and steal a card or cards of matching suit if possible – one card for each paw on the Grabby Paw card. (The grabbing hands grab all they can.) These are added to your collected sets.

The round ends when all 20 cards have been cleared from the table. Points are then awarded to 1st, 2nd, and 3rd place for each suit based on who has the most of that suit. After three rounds, that’s it. Or, that would be it if it wasn’t Sid Sackson we were talking about. I’ve already established I’m in the Sid Sackson Fan Club. And one thing that made Sid Sackson a supernaturally great game designer was his always remembering the maxim “simple doesn’t mean simplistic.” With Berried Treasure he adds the following basic ingredients to make it mouthwateringly delicious:

Variable scoring cards. Each round all four suits are scored, but their point values change based on which scoring card is active that round. (There are four different end-of-round scoring cards, and you’ll see three of them randomly each game.) So hoarded treats may or may not translate to higher scores depending on the current market card. And since scoring cards are visible each round, you always know the going rate for pies, tarts, macarons, and cakes, and thus can gank and swipe and steal mindfully.

Cumulative set collection. When you take Treasure cards you keep them for the rest of the game (unless stolen or unless you steal them back). So the sets you build (and score each round) are cumulative and progressively add to your most-of totals in future scoring rounds. Do you play the short game and quick-hit lemon tarts for a fast end-of-round point gain, or do you steadily amass mocha lava cakes across all three rounds to make sure you have the no-doubter monopoly for a big finish?

Ties don’t score. When scoring each round, if any players are tied for the most cards of a suit (no matter what place they are in) then that suit scores for each tied player as having ZERO of those cards in the round. Ties are the X factor in the game.

The frisson of decisions and strategy in Berried Treasure is as rich and deep as a multilayer cake. Start with the 20-card tableau. It’s perfect information and you are forced each turn to take a card. Sometimes the choice is obvious; you want suit monopolies in the short- and long term. But sometimes the last thing you want is to take a card. Because with each card unlocking another, there are times you have no choice but to set up your opponents for big plays that are bad for you. You may tee them up for a free Moar! or Grabby Paws card which grants bigger payouts, and quickly swings the four suit majorities at the table.

There’s also tactically playing for the tie. Sometimes you intentionally take a blueberry pie to the face so that your opponents won’t score any points on them either, and so you can keep it close in future rounds.

For a game with such a proliferation of “take that” given all the Grabby Paws and Moar! cards, Berried Treasure never feels mean. For one, card play on the racks invariably lead to underdog point swings, and surprise tactically advantageous ties. Also, since rat-a-tat take that is so ubiquitous, the relentless thievery in the game goes down tart and sweet for all the players, like the yummy baked goods you’re constantly trading back and forth. It’s fun and funny to savor so many losing moments and be perpetually, brazenly sneaky. You are hungry trash pandas, after all; this is your nature. 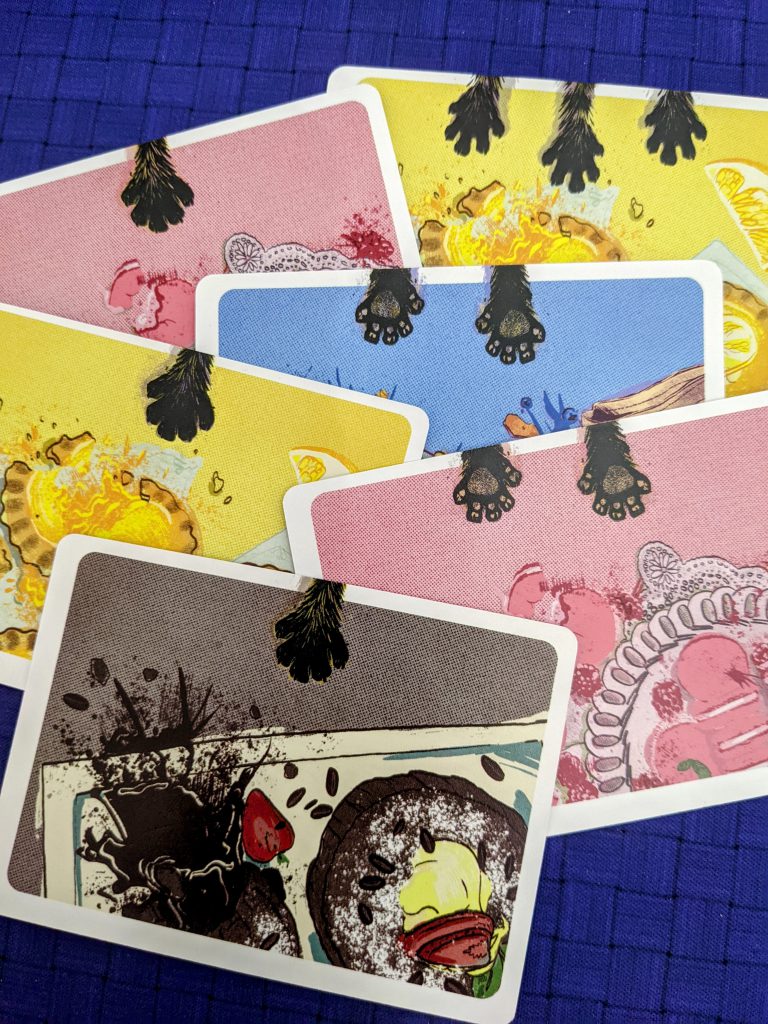 As expected from a Sid Sackson game components are simple and sparse: 60 Treasure cards, 4 scoring cards, and enough thick cardboard point chips of various values and sizes to keep score (illustrated to look like cookies). And the game’s artwork (by Heather Vaughan) is wonderfully prickly whimsy – the grubby critters aren’t cuddly, but are still cute somehow.

And “prickly whimsy” is exactly what playing Berried Treasure feels like. Sweet and tart. A mix of mechanics that flood players with a pleasing sugar rush, despite the baked-in sting of losing cards and points, and being shut out of set majorities. Take that and a series of snack-size failures in a card-playing free-for-all seems at odds with a gamer’s enjoyment, like raisins in an oatmeal cookie. But not with Sid Sackson as Star Baker. Berried Treasure is scrumptious. To play it is to eat your cake and have it too.