Blood Bowl for the Blood God, a team guide to Khorne

The Khorne team is one of GW’s new additions to the game, a completely original roster very different from the Daemons of Khorne team that players encountered in the original BB video game and the tabletop fan-made roster.  Superficially, it is quite similar to the Chaos Chosen roster, and might serve as an indication of how GW will develop Tzeentch and Slaanesh teams in the future, but in terms of its playstyle, I think players will find it starts to feel similar to the Norse team.  I’ll explain why and much more in our guide below! 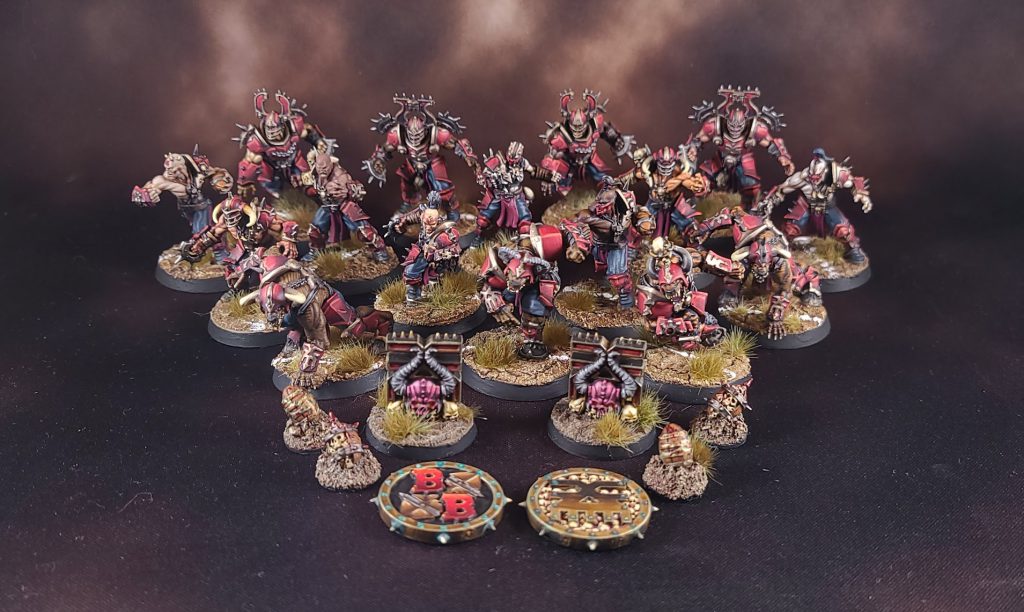 So why do I say the Khorne feel more like Norse than their Chaos Chosen cousins?  The simple answer is Frenzy.  Frenzy is a skill that completely changes your approach to the blocking game (We’ll be doing a Guide to Blocking soon that will delve into this concept in more detail).  It forces both you and your opponent to position very carefully; it can help you cause mass damage and create unique opportunities; but it can also increase the chance of suffering turnovers.  Khorne, even moreso than Norse, have an absolute ton of Frenzy, including on their base linemen, and this means on most turns a Khorne coach will need to do some careful thinking if they are to avoid playing themselves into bad situations with their normal blocks.  Khorne also lack the Norse safety net of mass Block, so they have a double challenge to face when playing even this most basic aspect of the game.

On the flip side, with some good positioning and some hot dice, Khorne can absolutely shred.  No one is generating more blocks and almost no one has more potential to move their opponents into places they really do not want to be.  Throw in their high Strength, a smattering of Mighty Blow and Claw, and Khorne have all the tools to be one of the nastiest teams in the game.

All of the above means Khorne are likely to have the same kind of boom/bust games as Norse.  Sometimes they will wipe their opponents from the field, and sometimes it will all end in frenzying into the wrong places and skulls.  What Khorne do have over Norse is significantly more armour, and thus durability.  Only the linemen have AV8+, meaning this is a team that should not bust too quickly.

Let’s take a look at the individual players on the team and see how they fit into that overall approach.

These are your humble blood-crazed followers of Khorne.  They have average human-type stats, but low armour, and the Frenzy skill.  At 50k they are at least relatively cheap, and that means they make good fodder, screeners, and foulers.  Their inability to take a hit or make a block reliably means they must be managed carefully, but at the same time opponents must respect their Frenzy capability.  Block is an obvious development option, though Wrestle is worth considering.  You might well consider Dirty Player to add even more nastiness to the team.

Our Khorne-flavoured beastmen are an interesting variation.  They have the standard beastman statline but have the Juggernaut skill on top of their Horns skill.  This means they are one of your safest options for a Blitz action in your starting roster.  As they are only players on your team without Frenzy, you will want to develop one Khorngor as your main ball carrier by giving it Sure Hands or Extra Arms.  But their wide skill selection options mean they have many strong development paths.  Wrestle and Tackle make them great ball-hawks.  They can potentially be good users of Guard.  But whichever route you do go, you want to get your max allowance of these as soon as possible.

Our Khornate Chaos Warriors are probably the most important and potentially powerful players on the team.  With ST4 and Frenzy they have great damage-dealing and opponent-position-disrupting potential.  However, unlike their Chosen cousins, their poor agility means turning them into makeshift ball-carriers is not likely to be a good route for success or SPP.   Block and Mighty Blow are obvious skills that automatically improve them at what they do well.  Guard and Claw are also strong options, though I personally think that Guard on Frenzy players has less value because it can be difficult to control their positioning.

The Bloodspawn is effectively a Minotaur with Claw.  And just like a normal Minotaur it is a very expensive, somewhat vulnerable piece, that has enormous damage-dealing potential.  Just like a Minotaur, you will need to manage its negatrait Unchanneled Fury carefully to ensure you get the best out it.  I believe that with the naturally swingy, higher risk-reward style of play that the Khorne roster is tooled for, the ‘Spawn is even more important to this team than the Minotaur is to Chaos Chosen.  The ‘Spawn does not actually want for much in development, but Juggernaut is the most readily available option to mitigate failure.  If you are prepared to save your SPP, Block will be even better.

Khorne have been given access to the “Favoured Of…” pool of stars, which currently includes a lot of high-strength bruisers that certainly fit the Khorne playstyle, like Scyla Anfingrimm and Grashnak Blackhoof, who both look like great value at less than 250k each.  Two interesting options are the Skaven players in this pool, including Glart as a ST4 Claw Blitzer-type for 195k, and the infamous Hakflem Skuttlespike at his newly increased but still-bargain price of 210k.  If you can make him fit in whatever your play format is, you couldn’t ask for a better ball-carrier.

In league play, your main decision is whether to start with the Bloodspawn or not.  I would suggest not, as it is a large and risky investment.  The following roster will give you a strong start with most of your key positional players and enough RR’s to prevent immediate Frenzy implosion.  I would suggest spending the remaining 10k on additional Dedicated Fans.

Your main goal will be to pick up the following as soon as possible:

The priority order will really depend on your own taste, with the RR being the safest investment, and the ‘Spawn having the highest upside.  An Apothecary is also a consideration, but I consider Apothecary to be of less use in League play in BB20 because of the changes to the casualty table.

In Tournament play, the Bloodspawn absolutely comes into the team.  This is a roster that has huge potential to blow opponents off the board and the ‘Spawn will be a major factor in that.  Also in tournament play, his relative vulnerability will only hurt you for the game in question, not the rest of the season!

The below roster has been built to an 1150TV limit.  This has become a common standard for BB20 Tournaments, but every tournament is different, so you may need to tweak this for a given event.

As skill packages can vary tremendously, i would offer the following general priorities:

I would consider Khorne to be a high Tier 2 team, and expect most tournament organisers will see them as such.  As a new roster it’s not quite clear exactly how good Khorne are yet, but I think much like Chaos Chosen they need the extra skill support from lower tiers.

GW have given us a strong thematic and well-balanced roster in their new take on Khorne.  Their distinct frenzy-based play style and huge damage-causing potential will make them both fan-favourites and a strong Resurrection Tournament option.  In shorter developmental leagues I think they will require careful management until they are able to skill a little and round out the roster, but they will be a very rewarding team to develop and will probably compete for the Most Casualties title!

As always, if you have any questions or suggestions for us you can drop us a line at Contact@Goonhammer.com.