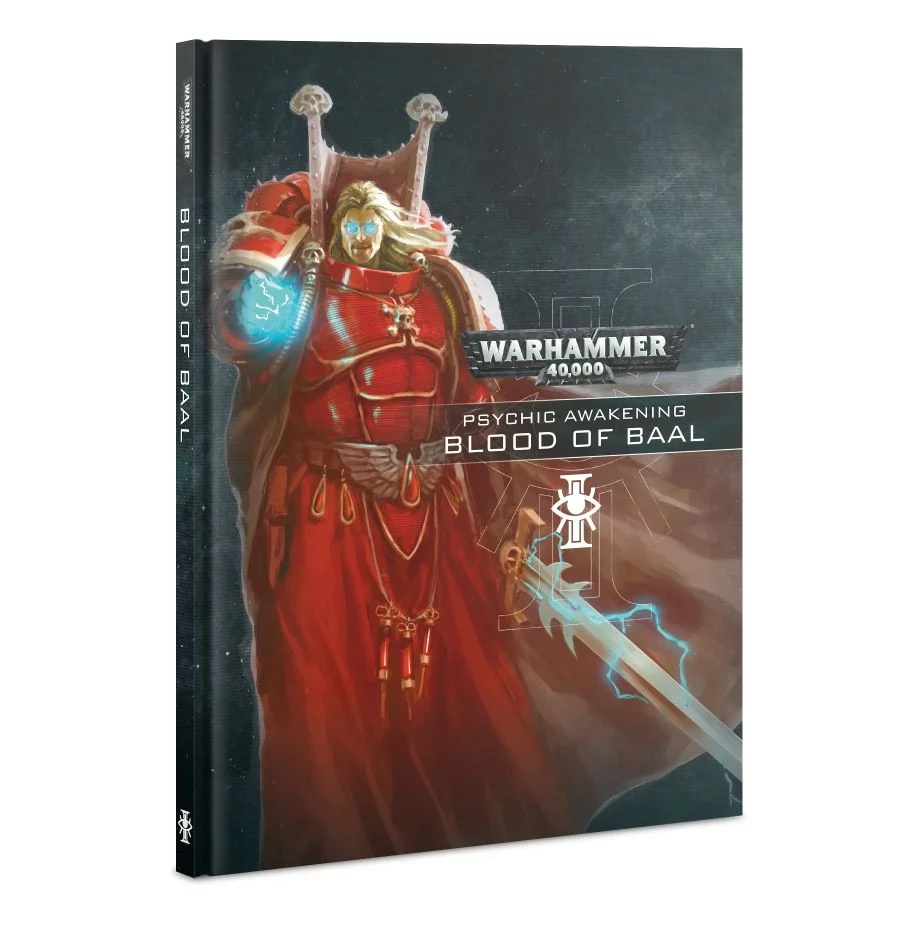 Tyranids have been in a rough spot for a while, and we’re extremely excited to see them near the front of the queue for some Psychic Awakening goodies. The army has the dubious honour of being one of the first to get an entirely new rule added (the “Rule of 3”) aimed at taking out one of their best lists right back in the first big FAQ. Unfortunately, what seemed reasonable and proportionate at the time quickly turned out to leave them a bit behind the power curve of the codexes that started dropping in mid-2018, and pretty much since Imperial Knights were released it’s been tough to be a bug. As we covered in our Start Competing article on the faction, they’re stuck in a kind of weird limbo where they have many units that are decent, but not good enough for competitive play. The end result is a Codex that just doesn’t quite get there, but has elements that are worth using in a Genestealer Cults/Forces of the Hive Mind list.

With the advent of Blood of Baal, Tyranids get access to a host of new abilities, rules, and stratagems that change the game completely, giving them multiple exciting new options and angles of attack. But are these rules enough to get Tyranids out of the valley and into a space where they can compete? Join us as we dive into the new rules in the upcoming book to find out. And if you missed part 1 covering the Blood Angels, you can find that here.

Gunum is here too! I’m incredibly excited to see these changes applied to one of my favorite armies, especially with how underpowered pure Tyranids have felt of late. I have over 20,000 points of these gribbins and I really can’t express how badly I want to put them back on the table. These new options GW came up with are very flavorful and I think something every aspiring Hive Tyrant will be able to get behind. There’s going to be some tricks, there’s gonna be some just Brutal abilities, and I can’t wait to dig in. Let’s go!

The new special rules in Blood of Baal only apply to Tyranid armies, and can’t be used by Genestealer Cults. The preface to the Tyranid section defines what a “Tyranid unit” is – any unit that has both the TYRANIDS and <HIVE FLEET> keywords. The new content includes new bio-artifacts, stratagems, Adaptive Physiology (see below), custom Hive Fleet Adaptations, and new psychic powers specific to each hive fleet.

I was really on the fence about this one. The nice thing about having a warlord trait is that the buff provided by it is protected by the character rule. Giving up your Warlord trait to turn one of your units into a target didn’t seem very great to me. Then as I thought about it, the Tyranid Warlord traits are all pretty sub-optimal, so going the way of an Adaptive Physiology bonus could be pretty awesome!

Additionally, if your army has a Tyranids CHARACTER, you get access to the Progeny of the Hive Stratagem, which for 1 CP lets you pick a Tyranids Infantry unit or Monster model from your army to give an Adaptive Physiology. You can’t double up, and you can only use the stratagem once per battle. This means that Tyranid armies can have up to two units with Adaptive Physiology if they forego a Warlord Trait.

Wings Note: I love this – it’s incredibly flavourful and a really interesting use of design space. I also like that the price of entry is low (just a CP). We’ll dive into the actual options later on, but I am hyped for this and want to see more ideas like it!

There are seven new psychic powers for Tyranids in Blood of Baal, and each one is tied to a specific Hive Fleet. Knowing one of these replaces a power in the Hive Mind discipline from Codex: Tyranids.

Note: In this section all “in-line” takes are from Gunum!

Tyranids get five new relic-like bio-artifacts to augment their characters.

This model can manifest an additional power per turn and deny an extra power. Also, when you take a psychic test, add 1 to the total. This is straight fire. Windmill slam this thing onto your Hive Tyrants for triple easy-casting action. S+ Ultra GOLD
Chase: Take this forever. Every time. I don’t say this lightly, but it -slaps-. Neurothropes are just gonna be in love.
Wings: Oh my god I take my eyes off them for one second they’ve invented a new and higher grade. My life is never easy. That being said, an A+ would be correct for this – it immediately becomes Tyranid’s best relic and there’s almost no reason you would ever run a detachment that could take it and chose not to. Don’t forget to combo it with Power of the Hive Mind and Synaptic Channeling to let you have a quad-casting Hive Tyrant that knows every spell. weeps in elf

When you make a melee attack, unmodified wound rolls of 5+ inflict an extra mortal wound on top of other damage. A solid ability, and better the more attacks you get. C
Chase: Taking Toxin Sacs alone isn’t super great, so having an artifact version really only helps Gorgan or Leviathan Hive Tyrants kill more. Still isn’t terrible.
Wings: I can’t really find a unit that has the right mixture of “lots of attacks” and “isn’t already murdering whatever it touches”. D from me.

Goes on a model with a stranglethorn cannon or heavy venom cannon. When you shoot the cannon, it always does its maximum number of shots. C+
Chase: Again, another item that might not be the best thing to have around as it is a weapon option that isn’t super efficient to take. This could be nice on a Walk-rent in Jorgamunder or even a Tyranid Prime to help with some light AT shooting.
Wings: I’d actually have this as a B+ – I think it’s just fine on a basic Kronos walkrant with either gun, turning them into a reliable shooting platform. It’s a nice combo with a stranglethorn cannon and the Kronos spell too, allowing them to menace larger units.

Add 8” to the range of the model’s ranged weapons and when it fires Overwatch or is chosen to shoot with, you can re-roll a single hit roll and a single wound roll. B+
Chase: I feel like this was made for Flyrants with double Brain-leech worm machine guns. Moving their range from 18” to 26” is huge and can allow you to skirt the enemies edges without fear of getting too close to things like Smash Captains.
Wings: Agree. It’s another one that’s just straight up fine on a gunned up walkrant too.

Replaces adrenal glands. When you make a charge roll for this model, roll an extra D6 and discard the lowest die. Also, you get +1 to your Advance rolls. B+
Chase: Another item that is just awesome, but at the same time is a tough pick. In a weird way, this is a required item for Trygon Primes. Giving them an extra dice to try and charge in will make those murder machines actually get into combat before getting slaughtered by your opponents’ heavy guns.
Wings: This starts to make hitting melee out of Deep Strike look real reliable for Behemoth, which is nice

Tyranids get a bunch of new Stratagems in Blood of Baal. Most of them affect a single unit type and offer a strong bonus.

Now the true test. This is an interesting idea that has been put forward by GW to adjust to the sub-par Warlord traits in our book. Is it worth giving up …uh… 8” bigger synapse ranges for one of the following abilities? This idea really begets building units to their maximum amount of models. Is it worth it?  Let’s find out together here.

Wings Note: The really important thing here is that nothing about the wording stops you using these on models that would already have been eligible for a warlord trait, so you can think about these as effectively being extra warlord trait options for relevant models. In fact, currently (I expect this to get FAQed with maximum prejudice) there’s nothing stopping you dropping these on Named Characters! I’m not going to dwell on the impact of that especially because I’m pretty sure it’s going away, but enjoy two weeks of fun with turbo-powered Old One Eye and Swarmlords I guess.

Tyranids now get access to the ability to make their own Hive Fleets. These work similar to Successor Chapters, but you don’t get to pick a parent Fleet or anything so we avoid getting any of the cool stratagems and powers that the Codex hive fleets get. When you make your own Hive Fleet, you pick two of the following rules. Being unable to pick a parent fleet does kind of feel limiting when we get to see everything the Space Marines get on top of their own faction rules, but what’s here creates some pretty silly combinations to think about, especially if we want to focus on a specific unit type. And unlike with Space Marines, we won’t lose anything by combining multiple hive fleets in the same army.

Overall, Blood of Baal provides Tyranids with some great options that really improve their chances moving forward. We think there are a few things here that help give them a much-needed push into the realm of respectability. Whether your strategy focuses on charging into melee, shooting from a distance, or overloading the enemy with psychic powers, there’s something here for everyone and we’re excited to see Tyranids get some love because these days anything that helps a non-marine army compete is a blessing. As always, if you have any feedback, questions, or comments, feel free to drop us a note in the comments below or email us at contact@goonhammer.com.