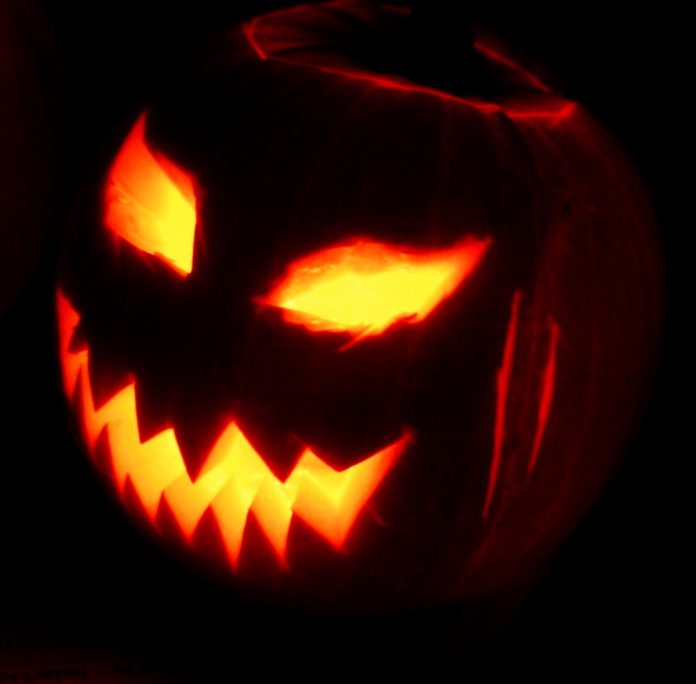 Pour yourself a pumpkin latte and pass the candy, it’s scary season! While actual horror can be hard to get across over a board game, there is no shortage of moody, eerie, or Halloweeny games to celebrate! Stay tuned all month as we share even more October appropriate games.

Who Goes There? Certifiable Studios

In this The Thing inspired sci-fi horror game, the players start as humans trying to survive the tundra in a shack. You have banded together to gather supplies and build weapons to fight off rabid animals and madmen, but you have to fix the boiler, secure the doors, and fight the freeze until you can escape. You’d better stay fed and don’t sleep alone at night, or you will be even more vulnerable to the infection from the shapeshifter that may be posing as one of your teammates!

The humans are eventually trying to escape in the helicopter for warm and safe territory. However, so are the infected folks that are now being controlled by the alien entity. If an infected party member makes it onto the helicopter, they can cause the humans to fail their escape roll and they will bring the infection home with them, dooming humanity worldwide. Tread carefully!

A rapid set collection game that depends on dexterity. If you have enjoyed the classic game Spoons, you should check out this one. Players pass 9 different spell types around as quickly as possible. The first player to gather 4 of a kind slaps the cauldron marking that type of hand, which opens the table for others to mark the hands they possess. Players pick the targets of their collected spells and Counter-Spell actions are taken until only one witch is left standing to gain control of the forest.

This is a light and funny game that is good for sugared-up kiddos that need to burn some energy or a party of goofy-yet-competitive players hell-bent on eliminating everyone else. It is mostly based on luck and speed. The rules are fairly simple and not heavily detailed and a good gateway game for extended family who aren’t used to deep strategy gaming.

One player acts as the silent ghost trying to tell the story of how they died through vision cards and the other players are the mediums trying to piece the puzzle together in this co-op murder mystery game. The game is played in 7 rounds as the ghost deals out vision cards to each player who must determine the suspect, the murder weapon, and the location of the victim’s demise based on the vague clues. The players vote on each other’s visions and gain clairvoyancy tokens as they get their theories confirmed and try to get to the epilogue with all the answers before the ghost disappears forever. Correct answers move you to the finish and help you bring justice to the murder victim so the ghost can move on to a more peaceful plane.

It is a visually captivating game that requires a good amount of focus; players only have 2 minutes per round to try and suss out what the ghost is trying to say with the cards they have been handed. Its main challenge is the interpretation of cards (this publisher also created Dixit, so if you’re a fan of that one you will probably love this one too) and trying to be a mind reader. Plays good with larger groups of people who don’t need a lot of complexity to enjoy a game.

Fluxx is a series of card games with rapidly-changing rules, and Zombie Fluxx is a great Halloween Twist! Players draw and put down cards to try and reach one or more goals on the board before they (and most of the other rules) can change as each player makes changes to the board. This particular game throws in Creeper cards (with one or more Zombies on each) that can stop you from winning the game even if your other cards match the goals. You will want to shake off the Creepers and strategize your plays so that you throw your cards in just the right order before anyone else can beat you to the punch. But beware of cancellation cards that can snatch victory from your hands at the last possible moment.

Zombie Fluxx can be highly competitive or a riotous game depending on your players. The different cards and the big dose of luck can end a game crazy fast or drag it out for several more rounds. Names will be cursed and threats will be made as the Zombies move around, but as the game is constantly changing, you have to pay attention to stay on top of the rules. Nothing is more frustrating than accidentally tossing or losing a card only to find out it just cost you a win!

Betrayal at the House on the Hill, Avalon Hill (Hasbro)

I don’t think it’s possible to make board games that are actually scary, but Betrayal at the House on the Hill does a fantastic job of hitting all the correct vibes for a Halloween gaming session. Players take on the role of a number of relatively unassuming characters, such as the jock, the scientist, or the little girl, each with their own stats for things like speed, intellect, physical prowess, and sanity as they explore the titular house on the titular hill. Games of Betrayal are split into two parts: In part one, players explore the house cooperatively, uncovering ancient artifacts and secrets in its eerie rooms and triggering omens, with each omen increasing the likelihood they’ll trigger the second part. In the game’s second half, one player becomes the traitor (typically the player who drew the Omen kicking off the game’s second half), and they suddenly become the game’s supernatural villain, working against the players until they can either escape the house or stop their evil plans.

The house itself is made up of a series of connected room tiles that are added randomly as players explore; this first part of the game tends to be the more fun half, as players uncover the mysteries of the house and reveal creepy new rooms and suspense builds with each new Omen revealed. In this way, the game can be more fun on repeated playthroughs, as players will be more aware of how the mechanics work and as a result there’s more suspense about the increasing odds of triggering the betrayal with each new room. The second phase is fun enough but often a bit too random – the traitor’s run can range from “an unstoppable reign of terror” to “standing by helplessly as everyone runs out of the house” depending on when and where they are when the second half kicks off.

Overall it’s a fun enough game to play once or twice per year and simple enough that you can easily pick it up after a long time away and explain it to new players without much trouble. It’s casual enough that no one is going to feel upset about losing or take it too seriously and its off-brand Scooby Doo vibes are perfect for the Halloween season.