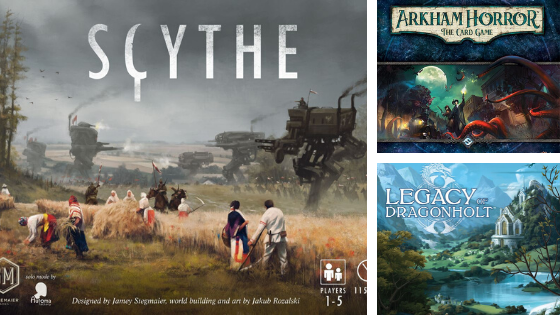 Board games tend to be a social experience. I’ve been an avid board gamer for years and while the game is an important part of a successful board game night, the people are for more important. Games gives us a reason to step away from screens and sit down around a table together to repel invaders, defeat our enemies, or even save the world. So what do we do when—either by choice or by governmental order—we can’t hang out with our friends? On this week’s Boardhammer I’m going to explore solo board gaming. There are hundreds of games designed to be played solo, and thousands more that have great solo modes.

So if board gaming is a social experience, why would you ever sit down to play by yourself? For me it’s about the tactile comfort of analog gaming and the strategic arcs that board games deliver. There is a comfort in the clacking of tiles and the shuffling of cards. It provides a connection to the game that I don’t get when holding a controller.

Played solitaire, a board game becomes a quiet moment of respite from an otherwise screen-filled day. This is especially true right now when I spend all day on my laptop trying to work while either Frozen II or 101 Dalmatians plays in the background entertaining the kids. On days that I’m up early a quick round of Escape the Dark Castle, with its big chunky engraved dice, supplements my coffee and gets me going. At night a longer game of Gloomhaven or Posthuman Saga gives me a way to let the stress of these days fade away for a while.

Video games also provide a satisfying strategic escape, but its of a different sort. Most of the video games I play are designed to provide hours and hours of play. Untitled Goose Game was a roughly 5 hour experience and that’s both shorter than any game I own and longer than any board game I’m willing to play alone. When I set up a board game I know I’m going to get a full arc of strategic growth in an hour or two.

Generally speaking, there are games designed to be played solo and games that you can play solo. Pandemic (and nearly every cooperative game on the market) can be played solo simply by setting up for 2 or more players and taking control of all of them. As you’re working together with no hidden information, this is a perfectly functional and satisfying way to explore cooperative games. You can also technically play any game against yourself. There are, however, games specifically designed with solo play in mind and I’d like to feature some here. Some of these may have cooperative or competitive modes as well, but they are all designed so that you can play completely by yourself as a single player.

Arkham Horror: The Card Game is absolutely my favorite go-to game for solo play. The card game belongs to the Arkham Files family of board games published by Fantasy Flight Games. The other titles—Arkham Horror, Elder Sign, and Eldritch Horror—all feature solo play and are solid games in their own right, but none of them hit the narrative highs of the card game.

In this card game you’ll build a deck representing the objects and abilities of one of your investigator. These can be literal objects like flashlights, guns, or books, but they can also be metaphysical items. There are spells for those that dabble in arcane arts, and even cards that represent the memories or lived experiences of your investigators. Ashcan Pete is a homeless drifter who has fallen on hard times; one of his cards is Peter Sylvester, the former football legend. If this card comes out of Pete’s deck, Pete gains strength and power as he draws upon his glory days to face the darkness.

It isn’t all positive, however. The investigators of Arkham Files games are damaged and broken people. Every campaign begins with players placing flaws and enemies into their own character deck. This laces every card draw with dread mirroring the dread felt by the fictional characters. Agnes Baker’s deck always includes a Dark Memory; the player can either share the memory with the table and advanced the Doom counter or hold it close in hand where it causes recurring psychic damage.

This careful weaving of game mechanisms and narrative is not restricted to player cards. Each scenario is defined by the Act and Agenda cards that tell the story, and a series of locations. These use symbols to create adjacency. In one early scenario they will represent buildings in town and share adjacency with each other representing how easy it is to move around. In another, your players begin on the back of a train and must move sequentially forward car by car. It’s brilliant and engages you in each story.

The card game is released as  “Living Card Game” which means that expansions continually trickle out. Unlike collectible card games, LCG expansions are fixed and include full playsets of every included card. No chasing rares or other limited distribution systems. Unlike other LCGs, each expansion is the next chapter in an ongoing narrative. New cards are provided that can be added to your character deck but most of the box is dedicated to the story, enemy, and location cards that form the foundation for the narrative.

A core set includes enough for two players. Start there and if you like it the next step is the Deluxe Expansion that catches your fancy followed by the Mythos Packs that are associated with the Deluxe expansion. The first arc is the Dunwich Legacy. You’ll begin by traveling to Dunwich to investigate dark rituals and work your way through 6 story packs that culminate in a cosmic showdown with dark forces.

Scythe blew the lid off of Kickstarter when it was originally launched, with good reason. The design is by Stonemaier games who have a list of well regarded titles under their belt, including Spiel de Jaher winner Wingspan, with stunning post-apocalyptic agrarian dieselpunk art by Jakub Rosalski.

Scythe takes place after the war, with fallen powers seeking to build dominance in an alternate 1920s Eastern Europe. You’ll begin walled in by rivers in your province before expanding out to farm resources and threaten your opponent’s with towering mechs. It’s a great multiplayer game, but I’m featuring it here because of its stellar Automa mode. Many competitive board games have “solo modes” that pit you against a dummy player in search of a high score, but not all are as robust as in Scythe. In fact, playing solo can feel completely different to playing multiplayer.

In multiplayer Scythe, there are myriad ways to score points though many will come from dominating territory. Combat is punishing for both the aggressor and defender, as it can deeply lower your popularity with the common folk; war is exhausting. Because of this, combat in Scythe can feel passive aggressive. Its the threat of combat that is more powerful than actual fighting. A clever commander will navigate their forces to create positions of mutually assured destruction and force their opponent to adjust in a different direction.

The Automa, however, is coming ‘atcha. This gives an already fun game an new lease on life, especially for those of us ensconced in our own personal pandemic bunkers. Scythe is a big game, with a lot of replayability. Grab it now knowing that it will have a long shelf-life even after our shelter-in-place orders have passed.

Finally we come to Legacy of Dragonholt. I sometimes feel like a madman, forever screaming the praise of this overlooked gem also published by Fantasy Flight. Dragonholt is a wholly different kind of game. It is a radical innovation on the old Choose-Your-Own-Adventure style fantasy genre that manages to blend the character growth and epic story of your D&D session with the packaged ease of a board game.

After creating your character and assigning all of their stats, skills, and so on you’ll begin your adventure by turning to Page 1 Paragraph 1 of a large adventure book. From there, what happens is up to you. Each entry in the book will see you faced with a choice that shoots you off to another paragraph. You’re probably familiar with the system from your childhood:

That’s where the similarity ends, however. Each choice sends the narrative sprawling off in one of a million directions. Along the way you’ll be directed to mark boxes on a narrative grid. Many of the choices you’ll face will only be accessible if you’ve previously marked certain boxes. This can be something minor, like having spoken to a different NPC previously. They can also be major. If, for example, a significant NPC dies then entire story arcs will be closed off.

This structure allows for lead designer Nikki Valens to build a non-linear story. Each session of play will cover roughly one in-game day and usually begins with you waking up. From there you can explore the city of Dragonholt sandbox-style. NPCs will behave differently on different days and you can even romance certain characters or play match-maker. The design also allows for directed personal growth. If the Blacksmith implies that you aren’t strong enough to head to the mines, you have the freedom to go do strength-building activities and return when you’ve unlocked the appropriate dialog choice.

It feels a bit like a BioWare RPG writ in paper and cardboard, though the transition to tabletop makes it easier to get friends you’re quarantining with in on the action. A few cards and flyers also provide for puzzle solving opportunities. Is that a hidden code in the letter you’ve received?

Legacy of Dragonholt is wholly unique in the tabletop gaming space and I’m sorely disappointed we haven’t seen more. It was originally billed as the Oracle system, leading me to believe we might see an Arkham Files or Android one (CAN YOU IMAGINE). Unfortunately, it seems as if this may be the only one we say so definitely snag it while you can.