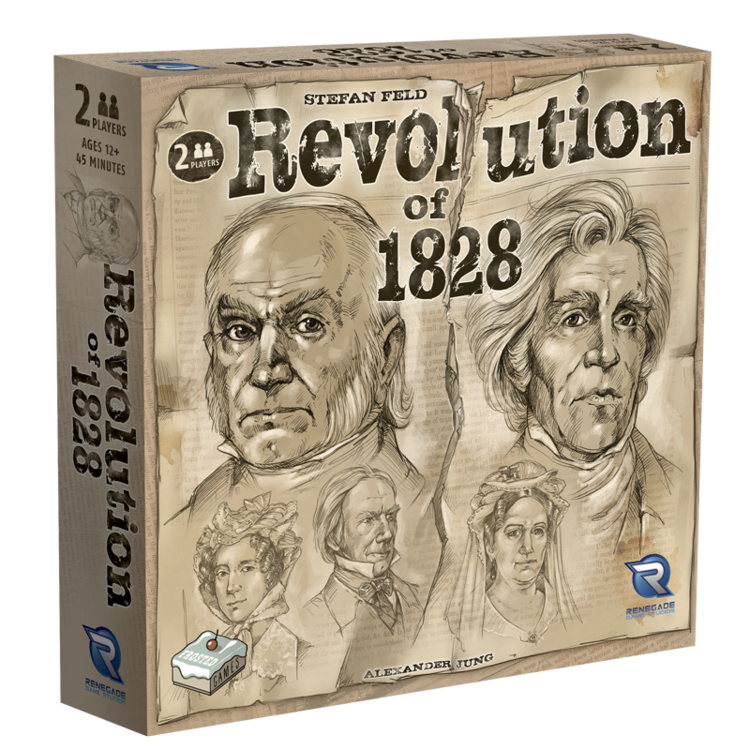 It is 1828 and the time for elections has come around again in this newly-formed democracy we call the United States of America. John Quincy Adams and Andrew Jackson are the candidates vying for the people’s votes. For the first time in history, this grand campaign is also fought on the pages of newspapers and the eager public audience. This was an election that found its way into history books with its yet unseen ruthlessness and malevolence. This was America’s first smear campaign. [Ed. Look at us now, baby!]

In this two-player game, you are trying to become the next President of the United States! To reach this lofty goal, each player will try to take Election tiles that suit you best and hinder your opponent’s campaign. Election tiles allow you to garner the allegiance of Electors and use the power of Smear Campaigns to skew the populace in your favor. If you also use the powerful Campaign Actions to your advantage and have the press look the other way, nothing should stand in your way!

Gain the most votes by the end of the game and start your work as America’s 7th President!

In Revolution of 1828, you get to play as either John Quincy Adams or Andrew Jackson running for the Office of the President of the United States, in what history would label as the first campaign where the press was used to smear their opponents across the US. You will be working on gaining control of different regions across the US and getting the votes to win, played out over a number of rounds. Work on smearing your opponent while winning the regions, but make sure you can control the press before they change the tide of play and sway voters away from you.

Setup of Revolution of 1828 is incredibly simple, as the game space consists of a small game board, a bag of tokens (called the election tiles), a small pile of vote tokens for tracking score, and a handful of meeples (called the ‘elector figures’). The game board has six different sections—each a different color—that represent different regions of the US. There is also a black section that is labeled as The Press. You will take each Elector Figure and and place it in its respective region by color. Each meeple should be placed in the white oval area; game play will have them moving to the player who controls that region. Place all the tokens into the provided bag and shake the bag to mix them up. Place the remaining vote tokens to the side in a pile. Pick a starting player and begin!

Revolution is played over 4 rounds, with each round consisting of 3 phases: Prepare, Campaign, and Count Votes.

In the Prepare phase, the active player will draw 18 tokens and place 3 of them face up randomly on each region of the game board. This will show you all the available actions that can be used on that turn.

The Campaign phase is where the game-play and strategy come into play. In this phase, both players will be alternating turns taking one of the election tiles that were placed face-up during the Prepare Phase. Pretty simple, right? Let’s talk about what makes this game so challenging.

The Delegate tokens each have a colored border around them, and when you pick them, you will place them on your side of the playing board underneath the region that matches their colored border. This is done immediately when a delegate is picked from the board. Delegates are important, as at the end of the round whoever has the most delegates in each color will get 1 vote (victory point). Pretty straight forward in their purpose.

When you choose a Smear Campaign token, you can place it on any region you want. Think of it as a Delegate wildcard. Sounds too good to be true, right? There must be a downside, and yes, there surely is. But we will get to that shortly. Let us move onto the Campaign Actions and what those do.

As mentioned above, there are a total of seven different type of Campaign Action tokens. Each one of these allow you to manipulate the playing area and tokens that are in play. From the Agenda token, where you tell your opponent what area they are going to draw from the next turn, to the Gerrymandering, which allows you to move a token from one region to any other one [Oof], to Polling, which allows you to take a delegate from your opponent’s side and move it to your side. Most of the tokens are used immediately upon picking them, but you do have some that are played at later times. Once one of these tokens are used, the player will place it to the side of the board in the area marked campaign piles.

All this talk of tokens, and no discussion about what happens to the delegates in the region, or what happens when the last token has been taken. Let us address both of these. When the last token in a region has been taken, the player that takes that last token will take control of the Elector (meeple) AND get another turn! That is right, another turn. And remember, there are only 3 tokens per each region per round. And that Elector that the player takes counts as additional points during the scoring phase, where you get additional votes for each delegate you control in that area.

You can see where the tricks all happen, and strategic planning is needed, as you do not want to let your opponent pick up the last token of a region as it will give them another turn along with the Elector for that region.

The final phase of the round, called Count Votes, occurs when all tokens and actions have been taken in the round. Each player will start by comparing their campaign piles. Whoever has the highest amount of election tokens will gain 3 points. You then go down a small checklist to get additional votes. Once you have counted out the points, you then need to take all those Smear Campaign tokens you have and move them to the Press Area. Whoever has the Editor on their side of the board will give their opponent 1 point for each Smear Campaign they own. Remove all the tiles on the board except for the Smear Campaign tokens, put them aside, and start the next round.

Play continues until all 4 rounds have been played, and the winner is the person with the most votes!

What can I say about a game mechanic where all you do is pick a token and place it on the board? Tons. Because it is all about the strategy hidden inside of this game. Mechanically, it is quite simple. Pick a token – if it has a colored border, place it in the corresponding spot. If it does not have a color, take an action that ruins your opponent’s day. Pretty sweet and straight forward. Even when it comes to scoring, every action you take will contribute to gaining a victory point (or a vote, so to speak). Setup of the game takes less than 5 minutes, teaching the game almost the same amount of time. You think you know your next move? Ahh, that is the rub. Can you force your opponent to take a token they don’t want so you can take two turns, or can you stall them from picking a wildcard when you might take negative votes from the editor but win points in a region? It is all about that strategery.

Game play is smooth and while the box states it can take 45 minutes per game, we rarely went over 30 minutes in it. The slowest part of the game for us has been looking at all the ways to score victory points, and even then, scoring between rounds helps that move along. With the player alternating taking the tokens from the board, and only 18 on the board per round, you will fly through once you’re familiar with the token types. The one thing that we have noticed during all the playthroughs is how some players fall into a pattern of choosing their victory path, so it is very easy to capitalize on that and use it to your advantage.

There are currently no expansions available.

Renegade Games did a great job with the artwork and coloration of the game, giving it that dated 1800’s look. Even the artwork on the tokens purposely have the hand drawn look of the early newspaper days. Component quality is, as expected from Renegade, high quality thick cardboard. The meeples are standard wooden meeples, and the bag to hold the tokens made of a good quality material with a drawstring to close the bag when in storage.

Let me start by calling out that this is a Stefan Feld game, so you know how he loves that simple, yet heavy decision-making style of gaming. Each token you choose is a point and can also impact your opponent’s side of the board. Throw in some tokens that, while they can help, maybe just maybe cost you points during the scoring phase. As you play the game, you will find yourself thinking 3-4-5 moves ahead to try and optimize your path to victory, while throwing shade at your opponents campaign.

It is boring. Now, hold on and hear me out. I have played this over a dozen times with different groups to get a feel for the game, and really enjoyed the games I played. But it is the same thing time and again. While I love that it’s a simple 18-tokens-per-round setup and fast rounds, that’s really what you’re doing time and again. And if your opponent is one who has to think and rethink before they go (aka Analysis Paralysis (AP)), then you’re just waiting for it to end. The simplicity that I called out above as working is also the one thing that I wish was different or had more to it. It’s almost too simple in its mechanics, where you’re just doing the same action over and over for the entire game. Yes, there is a great strategic part of the game where you must think multiple moves ahead, but then it is just taking the token then waiting. And I wanted more. Maybe a set of cards with secret objectives or special moves to help counter or manipulate either side of the board? Maybe we will see an expansion that will help add more to the game.

I’ll also call out that for those that have issues with colors, you will have a hard time to differentiate between the colors of the tokens. As it is, Renegade Games has included words on the tokens that will help you see what regions they go into, and images that give a clear definition of what the actions are.

Ok, you have seen me both praise and call the game boring at the same time. It’s that love/not-love relationship I have with it. I love the simplicity of the game play, the artwork and coloration based on the time-frame, and the ease of picking it up, learning it, and playing games with it, but feel that we need a little more interaction or depth to the game. I do not mean I’m looking for another Trajan or Oracle of Delphi by Stefan Feld, but I was left wanting with this. Will I play it again? Yes. Was it enjoyable? Yes. Did I wish it had more meat to the bones? Definitely.