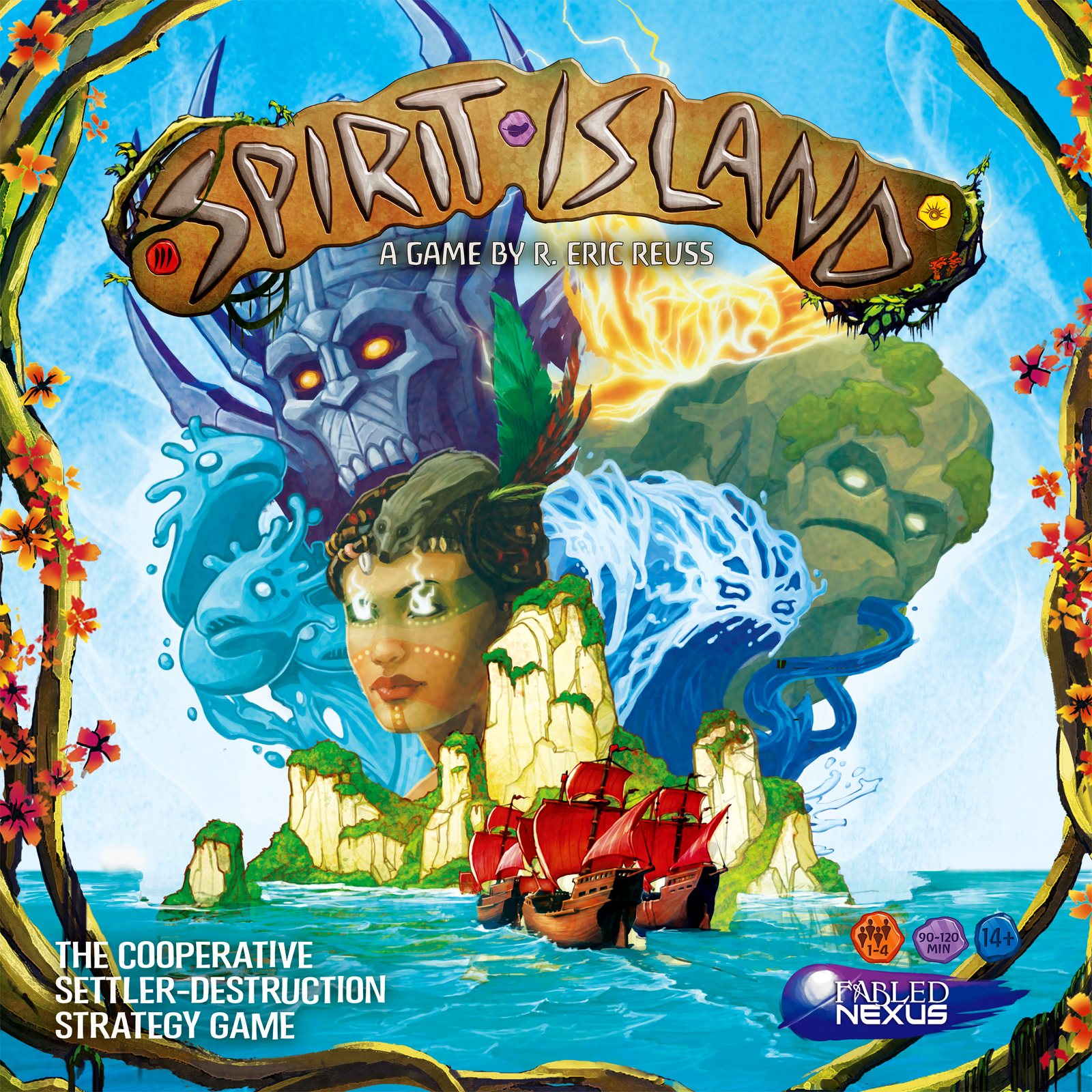 There are a surprising number of boardgames where you play as colonists, or exploiters taking advantage of unspoiled lands and the indigenous people there in order to further your own goals. The unpleasant side of them tends to be abstracted just a bit so no awkward questions really have to be asked (Puerto Rico is a good example here). Thankfully, someone who is actually good at game design thought this exact same thing, and used it as inspiration to create Spirit Island, which flips it all around; you’re the one playing as the unspoiled land, the inhabitants of the land, and the increasingly angry and powerful gods that live there.

Spirit Island is a 1-4 player cooperative game where you play as guardian spirits of a tropical island. The objective of the game is to help the native inhabitants of the island (called Dahan) completely drive out the invaders.

The spirits run the gamut from personalized aspects of the environment (such as the forest, or the ocean, or the people that live there), personifications of concepts (such as the goddess of fear), or just creatures that are hanging out (like the giant rock dude, the bird that really likes fire, or the really powerful snake that doesn’t want to get out of bed but if these invaders don’t stop making noise…)

Each spirit is represented by a double sided card. One side has lore and a general description of how they play, while the other side has the nice, juicy mechanics—namely the double trackers. This is one of the things that really separates Spirit Island from other games, so it’s worth its own section.

In most engine builder games you have a collection of workers on your board, and you use actions to place them onto the general game board to do things. You shuttle the workers to the board and that’s that. In Spirit Island, each Spirit gets a list of growth options, which include: Gaining Power Cards (how you learn new abilities), reclaiming Power Cards (required so you can play an ability again), gaining Energy (how you use your abilities), and most importantly of all, adding Presence to the board.

Presence manifests as the coloured beads on your double trackers; you add presence to the board by removing the leftmost bead from either row and then placing it on the board (conforming to the rules for placing presence). Presence on the board functions thematically as your spirit’s location and mechanically as a locus for abilities. Taking presence off the tracker uncovers more circles, and these circles manage the amount of energy a spirit receives a turn, how many abilities they can use per turn and any extra elements they receive as a bonus.

What this all means is that growth expands your presence on the board and makes your spirit much, much more powerful. Some spirits have slower starts than others, but to compare 3 different spirits with different power curves at the beginning and end of the game:

Despite this, due to how the growth mechanic works, you generally have to make a choice between energy, abilities, or presence, which is part of the fun of the game.

So you’re probably wondering: What am I using all these powers on? And the answer to that question is you’re using them on the invaders seeking to colonise the island. These are explorers, pioneers and wannabe empire builders from Britain, France, the Netherlands or Sweden. Each of them play in a slightly different way but their base objective is the same. They want to Explore new areas of the island, Build settlements there and Ravage the island, which will kill the native inhabitants and spread corruption and blight. The targets of these actions are determined before the players even begin their turn, but the effects don’t get resolved until halfway through, allowing players to react and deal with them accordingly. If too much blight appears on the island, then really bad things begin to happen, and if the blight continues you’ll lose the game as the island becomes some sort of colonized hellhole.

Thankfully, the spirits and the Dahan (the native people of the island) won’t take this lying down. While the Dahan are generally peaceful, they will strike back against the invaders if they ravage their territory, and any survivors will hit back, hard. Enough of them will be able to take down fortified cities, or even an entire settlement group. Despite this, the Dahan are only the side show here, with the real focus being on the spirits.

Spirits are able to expend their energy to play minor and major powers These effects run the gamut from subtle to outright apocalyptic.

On the one hand, a spirit can summon a swarm of fireflies, or just generally distract the invaders, which works out to protecting an area from harm or moving invaders and Dahan around.On a more offensive level, a Spirit can do damage to an area—or a set of areas—destroying towns and killing invaders and possibly Dahan. Finally, by the time you hit endgame and the spirit gloves are off, you can unleash your full power and literally remove one of the boards from the game by shifting a tectonic plate and dragging an entire chunk of the island, and everything on it, down into the ocean.

Naturally, the more ludicrous powers cost much more energy to use, as shown in the top left. The speed of the power determines if they will happen before or after the invaders do their actions for that turn; ones that move invaders or defend territories tend to be ‘fast’, while the more destructive things tend to be ‘slow’. The other important thing for powers is the icons on the left, which represent elemental energy and can either boost the effects and strength of a power, or can activate your spirit’s ‘innate powers’, which is one of the things that are unique to each spirit, and along with their special rule, tends to make that spirit their own thing.

The elemental requirements for the innate powers tend to force you down a certain, thematic path. River Surges in Sunlight wants Water and Sun, Vital Strength of the Earth wants Sunlight, Plant and Earth and Bringer of Dreams and Nightmares wants Moon, Air and Animal. The Innate Powers vary from spirit to spirit, and range from the spirit centered around Fear being able to look through the Fear deck (we’ll get to that shortly) or just add general Fear, to the Ocean Spirit just flat out drowning invaders, to the Snake beginning to wake up and supercharge the other spirits while annihilating invaders.

Spirits win the game by driving the Invaders from the island. They accomplish this in one of two ways. The first is to completely fill up the Fear meter, causing the Invaders to judge the island to be completely and utterly uninhabitable – you can’t even leave your house without getting beaten to death by a tree or something, so they all just up and leave. The second way is to hit a destruction threshold depending on the current terror level (a low terror level requires everything on the island destroyed, while a high terror level requires only cities to be destroyed), which pretty much represents the invaders breaking from fear due to feeling unsafe. Either way, your island is saved and you win the game.

Fear is generated by either destroying invaders, or through certain powers. The more destruction you cause, the more fear is generated. When a certain threshold (determined by the number of players) is hit, a fear card is drawn and the effect is resolved after the first half of the players’ turn. All these effects are positive and they scale UP depending on how scared the invaders are. You want to generate fear, and you want to take advantage of these essentially positive random events.

Speaking of random events, it’s time to talk about the few things in this game that I’m not really a fan of. The main culprit is the random event deck that you can choose to draw from after you cast your fast spells, but before the invaders move. Due to how the game is played (using foreknowledge of the invaders’ actions to counter/mitigate them), this just throws a complete wrench into the system that you’re not really able to elegantly counter, especially when most of the events boil down to dilemmas where the spirits have to kneecap themselves, or lose Dahan, or take damage, or even lose powers. It makes the game harder, but not really in a fun way, especially when compared to buffing the strength of the invaders or using one of the custom scenarios.

Secondly, as in most cooperative games, there’s still the issue of quarterbacking. The pace and style of the game slightly discourages this (there’s more actions and choices than in something like Pandemic, which allows greater player freedom), but there is nothing preventing a better player from completely taking charge and telling the other spirits what they should or shouldn’t do. Of course, playing with a good group does prevent this, but just keep this in mind if your group does have problems with quarterbacking.

Besides those few minor issues, this has probably been one of my favorite games of 2018-9 (pretty much in a dead heat with 7 Wonders Duel). The combination of theme, the fact it’s a co-operative game, and the growing sense of progression as you play all add up to make something really fun. If you’re into co-operative games and you’re sick of Pandemic, I can’t recommend this enough.

If you’re interested in picking up the game, you can pre-order it, alongside the new Jagged Earth expansion, currently on Kickstarter

Let us know what you think about Boardhammer! Was there anything we missed in this review, or something you wish we’d have mentioned about the game? What games do you want to see covered? Drop us some feedback in the comments below, or email us at contact@goonhammer.com.