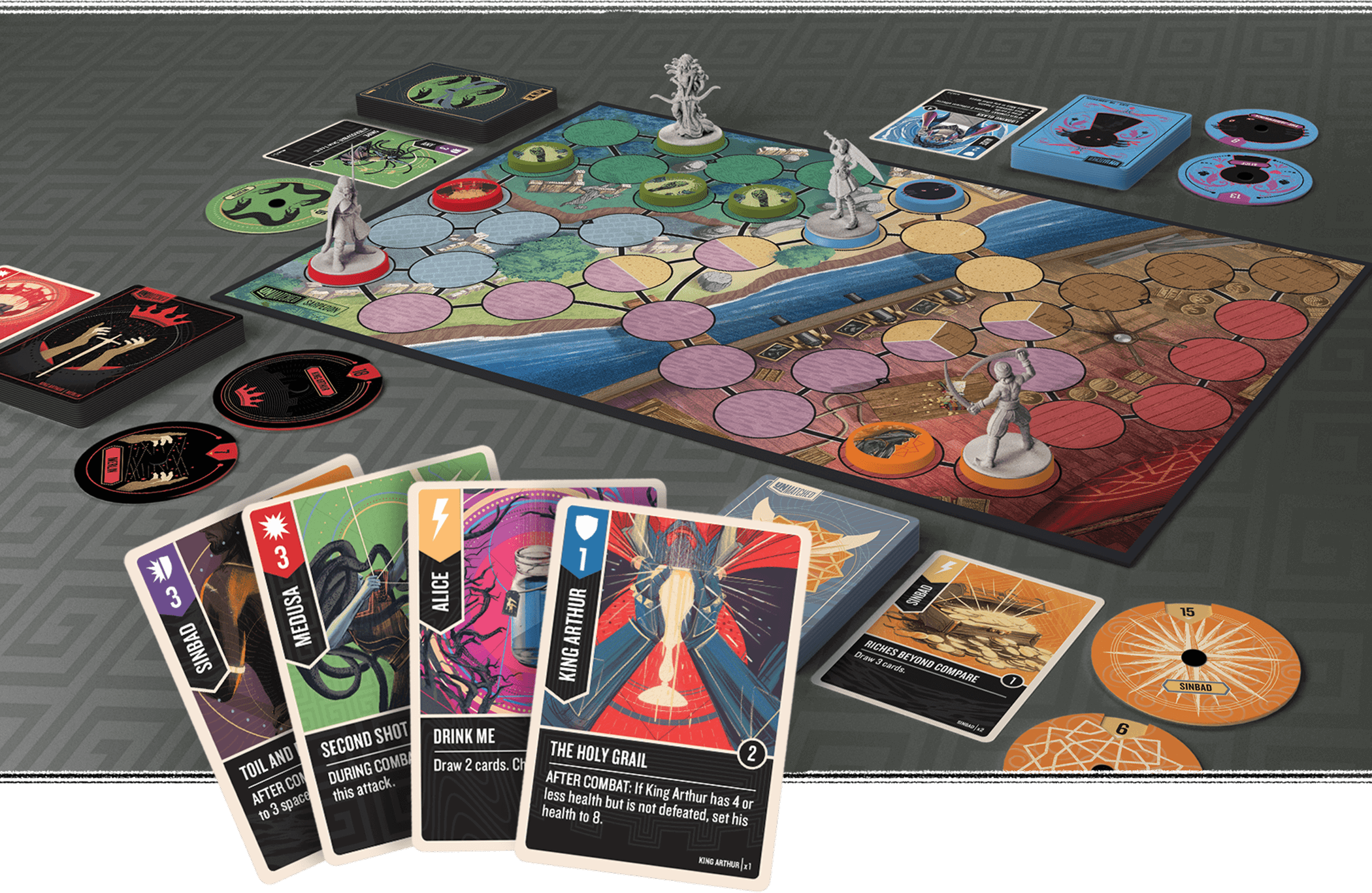 2019 was a banner year for skirmish games. Warcry, Undaunted: Normandy, Funkoverse, and even Aeronautica Imperialis if you stretch the definition a bit, all landed on our shelves last year. It shouldn’t surprise anyone that Games Workshop and Osprey games put out bangers. However, it may surprise you to hear that the best skirmish game of all may just be Unmatched by Restoration Games, a company that is most well-known for their refresh of the old children’s game Fireball Island.

Restoration Games’ raison d’être is taking older games that are no longer in circulation and updating them with new art and modern design sensibilities. Fireball Island was originally a fairly linear roll-and-move that relied on kinetic marble madness to carry the game. The new one maintains the Pachinko-marble elements while adding various paths to success and card play to make it more palatable to the modern gaming audience. In a similar vein, Unmatched is an update – or restoration – of Star Wars: Epic Duels, a skirmish miniature game originally published by Hasbro.

In Unmatched, you’ll take control of a primary fighter. The game initially launched with re-imaginings of some familiar characters drawing from public domain properties. In Battle of Legends Vol 1, the first core box, your available fighters are King Arthur, Medusa, Sinbad, and Alice. Fighters have unique combat decks with truly stunning art that will drive all the action, and most include a few sidekicks. Medusa is joined by a coterie of harpies, King Arthur brings Merlin with him.

With only those few components, you’ll deploy on battlefield with a few branching paths dotted with circular spaces. Most of Unmatched is presented in gorgeous fashion, one of the benefits of having partnered with Mondo. The large circular spaces are the only part of this game where the visuals suffer a bit, however using them eliminates any confusion about line of sight. Every circle has one or more colors in it and a model has line of sight to any space sharing any of those colors. This allows the design team to create evocative boards that represent elevated terrain, wooded cover, and more without introducing any additional rules.

Everything about this game is designed to be simple and intuitive. On your turn you take 2 actions chosen from a menu of only 3 options: Move (which includes forced card draw), Attack, or play a Scheme card. That’s really only 2 things: Move or Play a Card. Without exaggerating you can teach and play this game in about 20 minutes and every minute will be tactically rich. Ranged fighters can dance around the edges of the board launching volleys of arrows into their opponents, while a fighter like King Arthur will steadily advance until he can unleash some powerful attacks with Excalibur. Once you kill your opponent, you win. Simple.

Combat works by comparing opposing values on your offensive or defensive cards. Excalibur does 6 damage, but if you play a Defense card with a value of 2 then you’ll only take 4 damage. Most combat cards also have abilities that can provide benefits or mess with your opponent’s. Common abilities include additional card draw, bonus movement, or extra damage. All characters have access to an effect that cancels an opponent’s card ability which can come in handy or turn the tides if you manage to play it just right.

Unfortunately, the one downside to the card play is that there isn’t really a way to predict when a Feint might be wasted. With rare exception, you don’t need to do any set-up to enable cards which means you also can’t look at the board state and think “Ah, she’s set up for a certain card I might want to block”. This is, however a minor quibble that I mention almost out of an obligation to share my one issue.

To be blunt, this new version of Star Wars: Epic Duels kind of blew me away. I’ve liked almost everything that Restoration has published, but I’m always a little wary of combat games where each player is represented by 1 model. Games in this genre have a tendency to devolve into two pieces of plastic getting next to each other and players just rolling dice back and forth at each other while they activate abilities with little reason to move around. Not so in Unmatched; the use of unique fighter decks and restricted card draw options create a dynamic battleground.

Every attack or defensive play requires spending a precious card out of your hand. The only way to get more cards (with the exception of special abilities) is to take the Move action. What this does is force players into a natural flow of aggression and defense. All combat is card driven; by not giving characters a base attack ability on their character card players are forced into movement which is what makes a skirmish game dynamic. The game encourages you to move around; not through convoluted terrain rules or positioning requirements to fire off abilities, but by tying draw to movement. Movement no longer feels like lost opportunity to attack.

Each deck is also where a fighter gets their unique flavor. Sinbad’s cards all get more powerful the more “Voyage” cards end up in his discard pile; these represent adventures that make him stronger. Alice can use cards to shrink or grow, conferring defense or offensive bonuses as needed. Again, the design is simple and intuitive. If you pick up the Robin Hood vs Bigfoot expansion you don’t need to learn any new rules to control Bigfoot and his Jackalope, you can just shuffle up and play. There are of course nuances to unlock, and strategy to develop when you play as or against each fighter, but Unmatched is a game that gets out of the way and lets you play fast.

The bulk of the announced combatants are drawn from literature or myth. In additional what I’ve mentioned so far, the upcoming Cobble & Fog expansion introduces Sherlock Holmes, The Invisible Man, Dracula, and Dr. Jekyll & Mr. Hyde. The public domain is not their only source of inspiration, however. Restoration Games has dipped into licensed properties as well. If you’ve ever wanted to pit Buffy against the velociraptors from Jurassic Park – with Bruce Lee flipping around the board as well – then you’re in luck. That’s all coming this year.

Ultimately, Unmatched packs a ton of combat and tension into a small package. Short play time means you can play multiple games quickly, throwing various combatants into the fray or mastering one. It’s easy to learn and play but at no point does it feel simple or basic. Restoration Games has navigated a tricky genre and released one of the best 2p skirmish board games on the market, and I can’t wait to see how they incorporate new fighters. Editor’s Note: As of this writing, they’ve already released expansion packs for Robin Hood vs. Bigfoot and Bruce Lee. We may cover those in a future Boardhammer.

Next Time: More Board Games

Let us know what you think about Boardhammer! Was there anything we missed in this review, or something you wish we’d have mentioned about the game? What games do you want to see covered? Drop us some feedback in the comments below, or email us at contact@goonhammer.com.