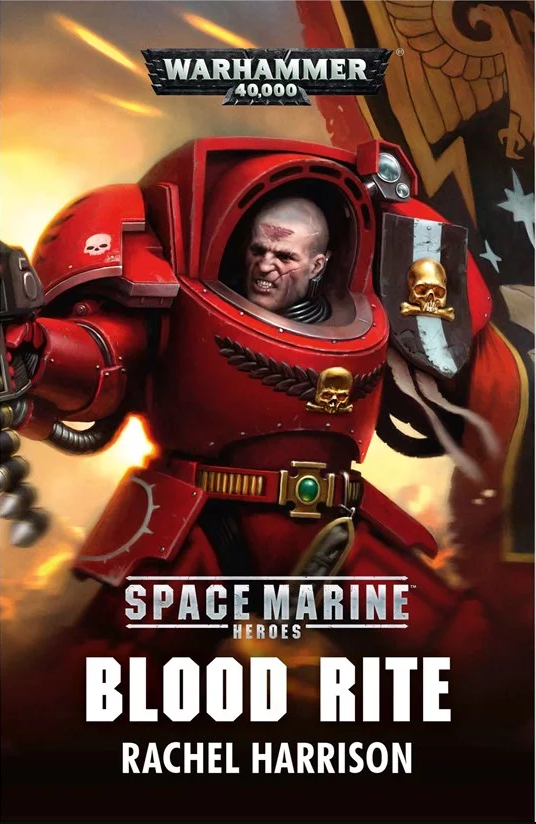 A little while ago, Coda reviewed Honourbound, Rachel Harrison’s first full-length novel for Black Library. His review of the adventures of Severina Raine and the 11th Antari Rifles was enthusiastic enough that it made me, someone who habitually avoids Black Library novels, pick it up. It turned out he was completely right – Honourbound is a fantastic book which I really enjoyed. Harrison brings genuine quality to the task of writing 40k fiction, a genre where other authors have often been long on enthusiasm and perhaps a little shorter on ability.

Enthused by this discovery, I was keen to read more, but as mentioned previously Honourbound is Harrison’s only full-length piece (so far – Mark of Faith, a Sisters of Battle novel, is set to arrive in the near future). There are a number of Raine-centric short stories available on the Black Library site, and she’s a character I’m definitely interested in reading more about, but what caught my eye instead was Blood Rite, a novella centred on the Blood Angels. The Sons of Sanguinius are my original 40k army from back in the year 2000 or so, and they remain one of my favourite Space Marine Chapters, so this was right up my street.

The novella runs to only 110 pages or so – consulting my phone the whole thing runs to 136 pages, but there’s a fair chunk of front matter in the form of Black Library advertising and then a full chapter of Deathwatch: Shadowbreaker at the end. It’s divided into three sections, entitled Brothers, Weapons, and Angels in that order. Each section takes the point of view of a different character, all veterans from the 1st Company of the Blood Angels – Company Ancient Darrago for the first section, Captain Donato for the second, and Brother Sanyctus in the third. The narrative flows back and forth between the present, aboard the warship Sanguine Tear, and the past, where the action takes place in Sanguis Gloria, an Imperial shrine dedicated to none other than Sanguinius, Primarch of the Blood Angels. A Dark Apostle of the Word Bearers, an old enemy of Captain Donato’s, has arrived to despoil the shrine, and it’s up to the Blood Angels to stop him.

Plot-wise, it’s fairly simple stuff, as you’d expect from a shortish novella about Space Marines. The Blood Angels have arrived to find a world which is special to them under attack by Chaos, they descend to fight Chaos, violence happens, and in the end the Blood Angels are victorious. A lot more happens than that, of course, and the story is full of incident, action, and all-around mayhem, but that isn’t what’s great about it (though it is very good – Harrison has a good eye for a set-piece battle).

What is especially interesting is the characterisation of the Blood Angels themselves. Something I really liked about reading Honourbound was how deftly Harrison was able to breathe life into her characters, spinning up developed personalities for them with little apparent effort. The same holds true here – you very quickly get a sense of the individual members of the two squads sent down to rescue the shrine. The three central characters mentioned above – Darrago, Donato, and Sanyctus – are particularly well-drawn. This isn’t always easy with Space Marines – the whole point of them is that they’re the saviours of a humanity they no longer really belong to, and that’s more difficult to get right than it first appears. They often float between being boring cardboard cutouts or quipping Avengers heroes, which rather misses the point. This is even more the case when it comes to the Blood Angels and their two great flaws – the Red Thirst and the Black Rage. In my opinion the Blood Angels represent one of the great concepts of 40k. The tension between their noble, angelic countenances and the savage bloodlust which is always boiling away beneath the surface is a great source of drama, but challenging to get right.

Happily, Harrison executes it perfectly. All of the protagonists feel the call of the Thirst, hungering always for violence, but Brother Sanyctus feels it most. Sanyctus spends the shortest amount of time as a point of view character, but in many ways he’s at the centre of everything that happens on Sanguis Gloria. Right from the start, we know that he’s closer to falling to the Black Rage than any of his other brothers, as he struggles to maintain control against the pull of the Flaw. What stands between him and becoming the monster that all Blood Angels secretly fear is his own adamantine will and the fraternal bonds of his battle brothers, in particular the Company Ancient, Darrago. The exercise of restraint is a difficult thing, especially when the one thing the Blood Angels need on their side in their battle against the Word Bearers is the capacity to dole out shocking violence on demand, and the tension ratchets up as the fiendish plot of the Chaos Space Marines is gradually revealed.

There is one other character who forms a core part of the story being told, though he is of course not a direct participant in events. At its core the Flaw is rooted in the death of Sanguinius, and Sanguis Gloria is sacred to his memory. At the heart of the shrine rests a grail supposedly belonging to the Primarch himself, and this is what the Word Bearers have come to corrupt. As such the setting has a huge resonance for the Blood Angels, and the novella skillfully explores their relationship with Sanguinius, and the loss still felt by them after ten thousand long years.

For me, the strong characterisation is what does all the work here. Despite its short length, Blood Rite takes on all the great themes of the Blood Angels Chapter, and deals with them in a deeply satisfying fashion. I rattled through in an hour or two – I knew what was going to happen, because the book says Space Marine Heroes on the front and that only ever ends one way, but I wanted to know how and why it happened, and experience the journey the characters go on. I was greatly rewarded for doing so. For a mere £2.99, I experienced what has immediately become one of my favourite pieces of 40k fiction, and one I would fully recommend to anyone.