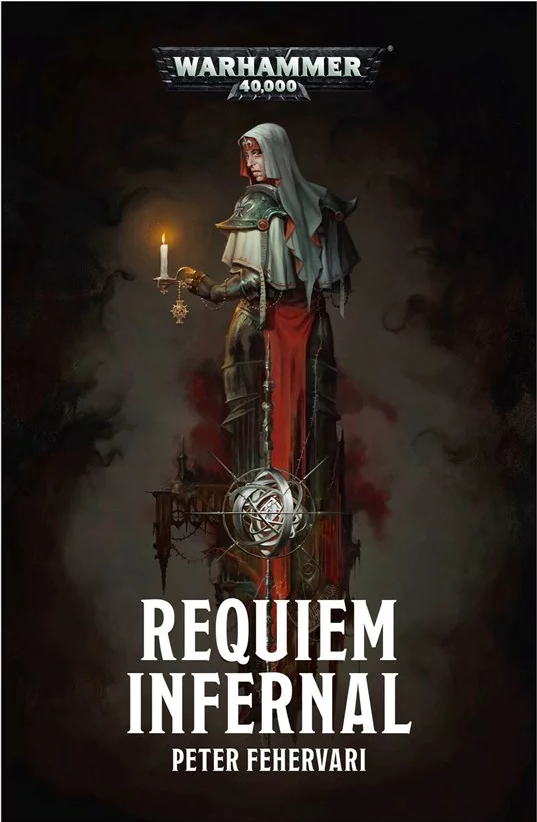 It’s fair to say that, after years in the doldrums, the Sisters of Battle are back in 40k in a big way. Not only is there a gigantic new plastic release which, at time of writing, is still ongoing, there’s also been a number of recent Black Library books written featuring the Adepa Sororitas, including the recent Mark of Faith. Requiem Infernal continues this trend, though from an altogether different perspective.

Rather than centreing its story around one of the prominent militant orders like Our Martyred Lady or the Bloody Rose, as other authors have done, Requiem Infernal’s focus is on the dark corners of the 40k background, and it picks a suitably shadowy order to focus on – the Last Candle, and their homeworld of Vytarn. Though there are warriors in the order, its interests are esoteric and its focus insular, isolated as it is on the mysterious Koronatus Ring.

As the back cover blurb will tell you, the ostensible protagonist is one Asenath Hyades, a Sister Hospitaller who left the Candleworld (as Vytarn is often referred to) many years ago, and now returns on a mission of mercy with the survivors of an Astra Militarum regiment which has encountered something in the depths of space and is worse for the experience. Secretly, she is also charged with investigating her old order for suspected corruption, though she expects to find only evidence of their innocence and faith. Rather than focusing on Asenath alone, however, the book has a sweeping cast of characters, many of whose points of view are explored, including Lemarché, the Commissar attached to the Exordio Void Breachers, Toland Feizt, their Breach Sergeant and a kind of mythic figure in the regiment, and a number of others. Chief among them, and in some ways the real protagonist of the piece, is Jonah Tythe, introduced in the prologue as a hiver in a world swallowed by night and whose story takes a long, winding path from there, which is revealed throughout the book.

There’s a lot going on here. In broad terms, the book divides into three acts – the opening third or so covers the travels of the Blood of Demeter, the ocean-going ship which transports the Void Breachers from their landing place on Vytarn to the Sisters’ base on the Koronatus Ring, the middle third takes place in and around the Sacrasta Vermilion, the hospital which sits atop one of the seven spires which makes up the ring, and the last third explodes outwards into a sprawling finale across the planes of space and time. That conclusion becomes pretty mind-bending, as Chaos descends on Vytarn in all of its maddening glory, secrets are revealed, and we’re steered through a non-Euclidean nightmare of ups and downs (or, rather, ups and backwards).

Fehervari definitely has an eye for the horrifying, and a tremendous grasp on some of the details in here which bring them to life in all their baroque weirdness. The monks who chant endlessly on the Blood of Demeter and their catamitic attendant are an early highlight, but I particularly liked the longer working-through of the corrupting touch of Chaos. In the Mark of Faith review I briefly touched on the difficulty of writing horror narratives in 40k, a universe which is already drenched in horror, but Fehervari does a brilliant job here of examining just how someone or someones – loyal, faithful Imperial servants all – might fall to Chaos. He also has some great fun entwining his own concepts with the more standard visions of Chaos presented in Games Workshop fiction.

The parts of Chapter 12 which focus on Jonah Tythe and the Celestians of the Iron Candle are a particular highlight, and showcase Fehervari’s writing at its best. Characters who have been with us for much of the narrative, but barely explored, are suddenly thrust into the foreground and are developed in a remarkably short time. This is the central chapter for the playing around with time and space which I mentioned before, and it’s executed perfectly, as the Celestians plunge ever deeper into what was, once upon a time, sacred ground of their order and is now an open pathway into the Empyrean. It’s a great piece of action writing.

The main disappointment, then, is that for all the high points the book hits, it has some significant lows as well. The early parts are slow, even glacial, and there is kind of just too much going on to the point that it feels fatty and a bit kitchen sink, like Fehervari had a dozen ideas for what the book could be and decided to just use them all. I also disliked the Asenath Hyades arc – she and her soul-twin Mercy routinely cross the line into cheesiness, particularly in the letter-writing segments which open each chapter, and for a character with so many words and pages devoted to her she seems to disappear into the background whenever the focus is off her. Some of the things which seem to be going nowhere early on are just slow burners, but some of the others are simply snuffed out entirely.

Late in the book there’s a not-so-veiled reference to Italo Calvino, the Italian master of metafiction, and the afterword makes explicit the metafictional ideas that Fehervari is exploring. I am also given to understand that there’s a larger, interconnected metaplot threading throughout his various different pieces, most obviously in this case the appearance (though in minor part) of the Angels Resplendent, his recurring Space Marine Chapter. The obvious issue here is that Calvino was a master of his craft; Fehervari is definitely not a bad writer he is not at that level, and at times it feels less like he’s working on great themes about the nature of fiction and reality and more like he’s lost control of his sprawling story and is trying to corral it back together while only dropping some bits of it along the way.

Overall, then, the question is “should you read this book?” My answer is: maybe. Ultimately, some of my issues are merely personal – I was hoping for a tighter, smaller, more contained story, heavy on the oppressive and gothic which is certainly present at times but is not Fehervari’s focus. If you already like Fehervari’s previous work, I suspect you’ll find a lot to like here too. If you’re a regular Black Library reader but you want to try something with a different focus from the big-picture, military-based narratives which typify the genre, then this is definitely worth a try. If you’re just dipping your toe into 40k fiction for the first time, and you’re more of a bolters and battle brothers type than someone interested in the deeper themes Fehervari is attempting here? Maybe try something else first.