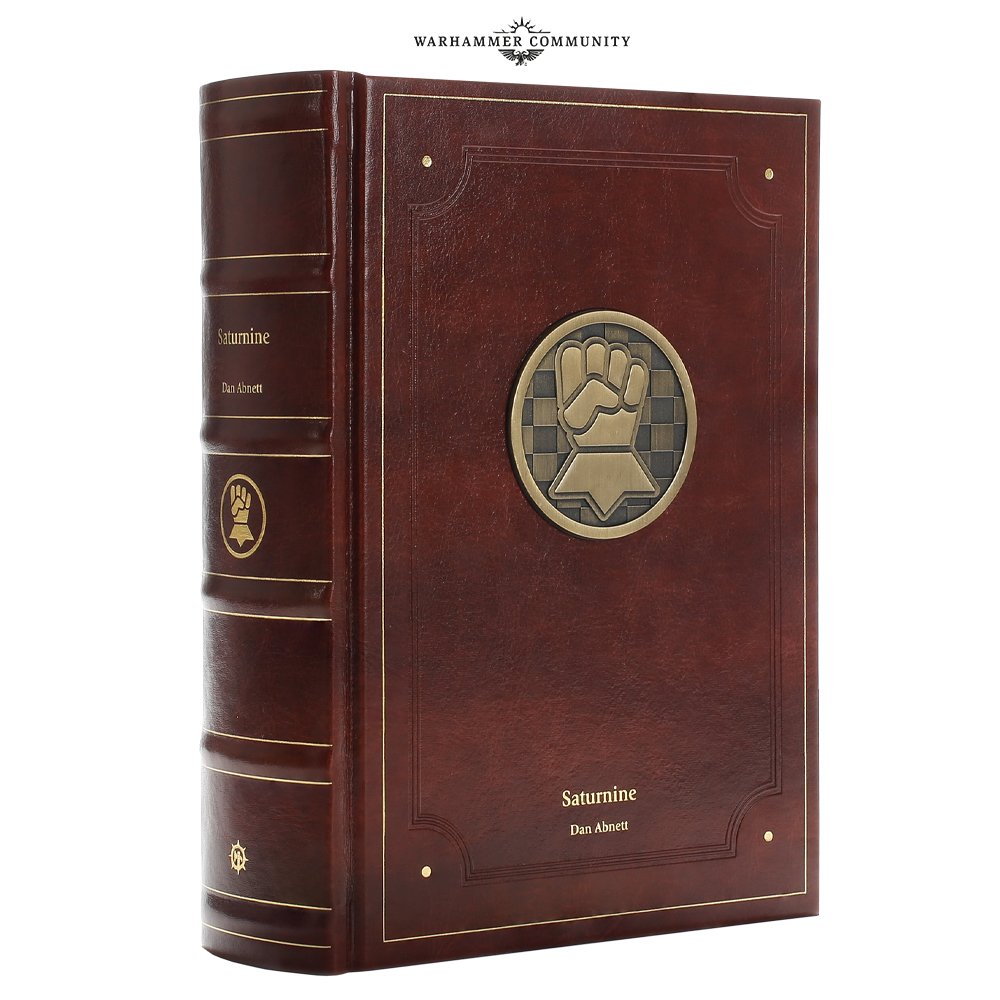 This review does NOT contain spoilers for Saturnine. That wouldn’t be nice.

“There is work to be done,’ he announced.

Dan Abnett is inarguably one of the most talented voices in the Horus Heresy series and has been a titan throughout the history of the Black Library’s catalog. Saturnine sees him returning to the story of the Horus Heresy, filling in some of the empty canvas between Horus’s first assault on Terra, and the inevitable and galaxy-shattering showdown on the deck of the Vengeful Spirit.
Saturnine is set at the midpoint of the siege; the traitors are making real and serious gains across Terra, and within the Palace perimeter. The end of the previous book in the series The First Wall sets the series up for the beginning of the true assault on the Imperial Palace, turning the grueling siege combat that was established in the Horus Heresy lore way back in issue 268 of the Citadel White Dwarf Magazine into shockingly rendered combat scenes throughout the theatre of operations. Saturnine picks up a scant hour after the final act of First Wall, with Rogal Dorn and his commanders scrambling to secure the palace perimeter in the face of ever-growing odds and ever-increasing threats.

As I promised above, as I am one of the very few people with access to this book, I will avoid spoilers, and skim over details but, my intent for this review is to hove to the characterization and presentation of two primarchs who have been around for the vast majority of the Horus Heresy series, but have never really been fleshed out to the extent of the major characters in the Prosperine War/Ultramar Shadow Crusade books.

So far, three out of the four published siege books have focused on single primarchs doing what they do best against the backdrop of Horus’s grand assault on his father’s capital city. Lost and the Damned had Dorn hovering in the background while Sanguinius did his thing. First Wall had a fairly nuanced depiction of the Iron Warriors’ relationship with their genefather, Perturabo, but also focused on Dorn’s relationship with his sons, both favored, or otherwise.

Rogal Dorn and Perturabo have been described as the bitterest of rivals ever since the inception of the grander Horus Heresy Narrative, brothers evenly matched in knowledge, skill, and ability, but with such a gulf of animosity and…. familial recognition between the two of them. The set up for this rivalry borrows heavily from the trends and genres that feature fraternal rivals and was only really ever going to come to tears. The characterizations of the resolute defender and the grim, unstoppable attacker have been established throughout the narrative, but at the end of the conflict, we know that the two men share more than just complementary skillsets. Perturabo is a cultured and surprisingly sensitive soul-  he appreciates and seeks art in his personal time, he indulges in the hope (well, early on) that his work will be for a true, better imperium, he keeps plans for Imperial cities that are filled with art, beauty, and peace. Similarly, Dorn is all-in on the idea of preserving the Imperium his father has set out to build. Time and again, the Praetorian is described as being a master at defense, and an utterly immovable opponent in anything from argument to personal combat. Dorn lives and breathes his duty to the Imperium.

Such unyielding faith, loyalty, and clear-sighted focus are the greatest strengths of the Primarch of the VIIth Legion, and maybe the only things holding Terra together, but they’ve also been shown to be the cracks that get past the Primarch’s stoic exterior. 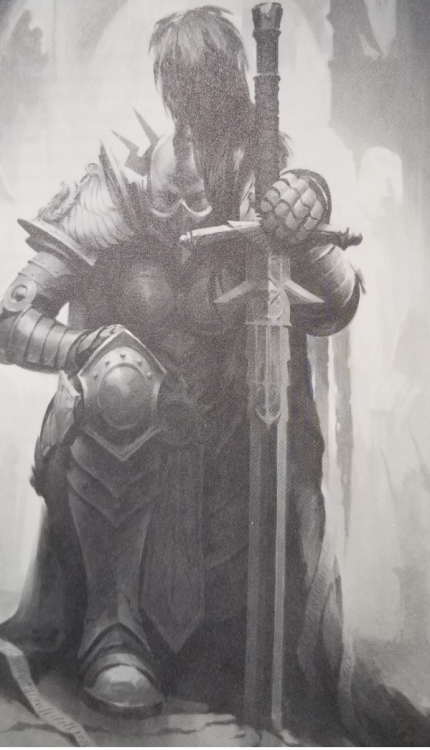 Faith, whether literal or figurative, has been a huge part of the Heresy story until now. The atheistic faith of the Great Crusade kept the momentum going to recapture the galaxy. The personal faith of the individual Astartes in their captains, chapter masters, and Primarchs is what led to the establishment of Legiones Astartes characterizations. The faith Lorgar held that must to be something bigger led to the (re?)introduction of Chaos into the Emperor’s armies. The faith of a small band of remembrancers in the Emperor’s suppressed Divinity is what led to a warning of Horus’s rebellion reaching the Emperor in the first place.

At the opening of this novel the Imperial Palace,and its defenders are enduring their 100th day of the assault. For the transhuman demigods in charge, it is uniquely stressful and frustrating that they cannot find the decisive fulcrum to break through. For the unaugmented humans, soldier, civilian, and administrator; it’s mind-shattering. Faith begins to break down, in institutions, in individuals, in systems of operation, and entire ethical frameworks. The entire human identity seems to be in freefall for Traitor and Loyalist alike. The unfolding battle sorely tests the mental and physical strength of even the transhuman Astartes, and the grinding attrition of the siege erodes even Dorn’s legendary resolve.

Rogal Dorn seems to discover a sense of humor in this situation, cracking uncharacteristic jokes with Constantin Valdor, Kyril Sindermann, even human General Staff officers. Such a break in the normal stony facade of the VIIth primarch is what begins to worry both the reader and the shell-shocked defenders. Perturabo has similarly found an STC cache of chill pills, shocking the traitor command structure by taking a day off to unwind and run literal tabletop war games with himself, inviting Abaddon along for commentary and company. The effect of these scenes is subtle but telling. Dorn maintains faith because he not only has to but wants to; the loyal son refusing to acknowledge the alternative should he fail. Perturabo announces he has given up his hope of there ever being peace, and finds himself further at odds with his brothers than ever before, fondly recalling learning via observation of Dorn’s war-making. The Primarchs, genetically and metaphysical avatars of human perfection start to show strain under the magnitude of their set roles. This slow erosion of monolithic personalities sets a tone of creeping unease for the majority of the novel, and that’s before the metaphysical angle gets involved. Sanguinius and the Khan, among others, make appearances in this book, but they fill known aspects of long-established lore; there is a wild Chogorian cavalry charge, and Sanguinius continues his habit of big-game hunting at the worst moments, but nothing more.

The Traitor Primarchs are… around (refer to my opening quote), and a few make appearances towards the climax, but the story doesn’t focus on their somewhat dull shenanigans in favor of the more grounded combat.

The themes of faith, duty, rivalry, and self-worth are what has kept me coming back to the Black Library, and wider Warhammer universes as I’ve gotten older. Beneath the stories of superhumans wailing on each other with industrial power tools, are heavy concepts that touch on character flaws instantly recognizable to millions of people. Dorn’s struggle with duty, reality, faith, self-doubt, and managing expectations of others puts a previously-inviolate demigod in a position of surprising vulnerability, and that’s where this novel starts. Similarly, the Siege of Terra series has so far, done an amazing job on focusing on the human cost and the experience of the average palace defender. Saturnine is not a break from the action in any sense, but it does take time to let scenes and coordinated actions breathe amidst all the horror and artillery fire.

This book is a welcome return from Abnett, and sets the series up for a truly apocalyptic second half. I cannot wait for the wider release to hit in July, and hope that you all have a chance to read. I will update this review after that release with spoiler information.

A note on these Limited Editions:
These are spectacular collector’s items. The artwork is gorgeous, and the overall construction, presentation, and just physical feel of the books make each a definite showpiece item. Unfortunately, I missed the initial window to buy this beauty and had to buy this one off an eBay reseller. It cost me $160 US to get this particular item, but I also had it in my hands the day after the seller received it. Now, I don’t begrudge the secondary market their profit, but I feel as though there has to be another way for the wider reader base to get these amazing products. Perhaps a secondary run of unsigned items might alleviate the mad-dash for the checkout button on a Saturday evening?

10/10 – A master returns to the Heresy, and everything is richer for it.

Want to discuss the book? Have any questions or feedback? Drop us a note in the comments below (but be respectful about spoilers!) or email us at contact@goonhammer.com.