Book Review: The Deacon of Wounds by David Annandale 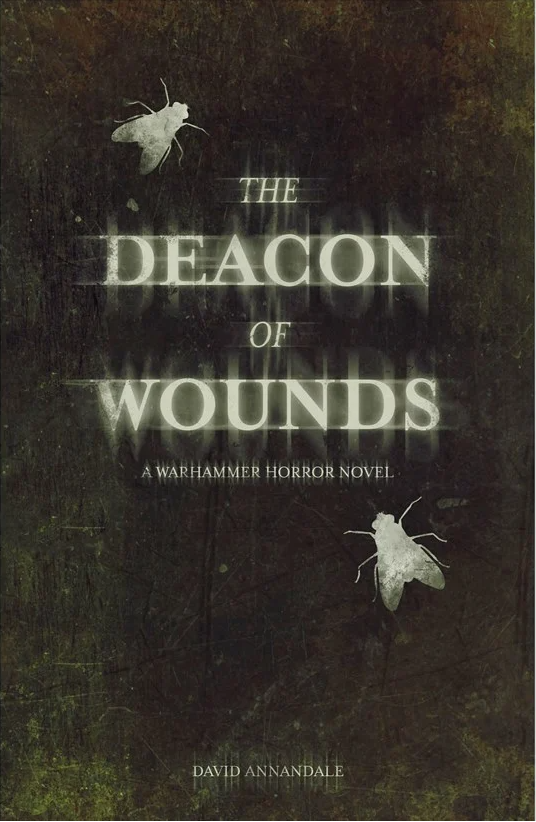 SPOILER ALERT: This review contains significant spoilers for The Deacon of Wounds.

It’s been a while since we looked at anything from Warhammer Horror, but today we’re back reviewing The Deacon of Wounds, a novella written for the imprint by Black Library regular David Annandale.

The story here is one of corruption, disease, and good intentions paving the road to hell – we follow Arch-Deacon Ambrose, a priest of the Ecclesiarchy on the world of Theotokos (“Mother of God” in Church Greek). Theotokos is the Ecclesiarchal seat of Cardinal Lorenz (who we meet having a very disturbing experience in the opening prologue), and it is a world that is running into trouble. In the opening chapter Ambrose is returning to the Ecclesiarchal palace having toured the planet trying to assess the situation, and he comes back with a dark report – a years-long drought has destroyed Theotokos’ cities and killed most of its population. The only substantial city left is Magerit, the capital, in which the palace sits, and even that city is dying of thirst, even as the Cardinal sits in his palace and hoards the world’s one remaining supply of reliable fresh water.

A familiar contrast is built up here. Lorenz is squatting on his throne, tired and disinterested, refusing to take any action that might risk his own security; in his ear whispers Rosarius, the relic-keeper, a man of minor official post but great influence thanks to having Lorenz’ ear. Anyone who’s seen or read The Lord of the Rings (and I’m going to assume for anyone reading this review that particular Venn diagram is a perfect circle) will recognise the Theoden/Wormtongue dynamic at play here. Ambrose naturally slots into the opposing role as the good, generous-hearted cleric who despairs at his master’s unwillingness to even attempt to aid his population. There’s some particularly nice writing in this early going as Annandale takes a moment for us to explore the consequences of this inaction; Lorenz is a Cardinal of supposedly great influence, with a parish extending far beyond Theotokos, but his sloth and inattentiveness has led to other cardinals carving off bits and pieces of his domain until he’s left with just this one dying planet he’s not even trying to save. Theotokos is an Imperium in miniature, rotting away as its hidebound and myopic bureaucracy loses its grip on the galaxy from sheer inability.

There are a few rays of hope in the early going, with some of Magerit’s citizens organising relief centres to try and at least stem the bleeding. Ambrose’ role as arch-deacon includes running the Ecclesiarchal finances, and while most of his formal powers have been stripped away thanks to Lorenz’ conniving and distrust (and Rosarius’ energetic egging on of same), he remains empowered over the Ecclesiarchy’s charitable works which includes supporting these relief efforts. He takes this duty seriously for its own merits, but it has another attraction for him too in the shapely form of Bethia, a manufactorum worker in the city and a rose among the muck of the common or garden Imperial citizen. The clergy on Theotokos is formally celibate and Ambrose knows the inappropriateness of his feelings towards her, with each meeting taking place on an emotional tightrope. Despite Bethia’s energy and faithful devotion to the Emperor, however, the relief centres are struggling with a problem beyond their dwindling resources.

Enter Nossos. This mysterious Cenobite appears as an unlooked-for counsellor to Ambrose, and if you’re at all familiar with 40k lore your alarm bells are already ringing at the prospect of an unknown religious figure showing up in a time of need with a few words of sage advice and suggestions that maybe, if you really hope for something to change, it will. Ambrose, of course, is desperate for exactly that – and shortly after Cardinal Lorenz dies in horrendous circumstances.

From here the spiral begins in earnest as Lorenz’ corpse proves to be infected with a mysterious disease, which also afflicts his supporters and nobody else. A disastrous funeral service for the Cardinal unleashes the plague within the city, and as control collapses the well-meaning, kind-hearted Ambrose – now empowered as acting Cardinal – self-justifies his way into utter disaster, culminating in a devotional ceremony which summons the Rainfather – and the three-circle symbol on the hilt of the knife used to make sacrifice in this ceremony will surprise nobody who’s been following the thread of “a world in despair, with a plague running rampant” as to who the Rainfather turns out to be.

This point does hit on one of the issues with Warhammer Horror generally and Chaos narratives in particular, which is a circle I’m sure it’s very difficult for Black Library authors to square – Warhammer is already effectively a horror property, and it’s very hard to properly establish something fresh within the conventions of that genre when things like “the ultimate victory of Nurgle plague daemons” is just something that happens all the time in the fiction anyway, never mind that there’s thousands of players across the world enthusiastically building and painting the little green guys. It’s a bit like trying to sell The Shining in a world where every hotel you check in to has a river of blood flowing from the elevator. What it means for us though is that anyone familiar enough with Warhammer to want to buy a Warhammer Horror novella can guess pretty much from word one how it’s going to go, and especially so in a narrative like this centred around the inexorable drift into corruption.

There’s also something of a lack of agency in the piece. Ambrose makes some disastrous choices as the narrative unfolds (and reflects consciously on them with a kind of end-justifies-the-means rhetoric that becomes increasingly absurd as he initiates a city-wide purge of ‘heretics’ and burns Imperial citizens in their homes, in an orgy of violence that would make the most radical Witch Hunter blush), but the jumping-off point is a little ungainly, with Ambrose doing little other than state objective facts to Nossos about the planet’s situation. It’s probably meant to show us the insidiousness of Chaos, worming in to the slightest crack in anyone’s spiritual armour, but with such a thin opener it rather suggests that there’s nothing any human can do and the situation will play out as mightier forces have determined in advance – which works from a cosmic horror point of view, but is somewhat at odds with the more personal scale 40k usually plays out on. If believing it would be quite nice if there was some water is enough to collapse Theotokos inside of a week, it rather suggests the rest of the Imperium should have messily imploded long ago. Just a little more spikiness from Ambrose in the early going might have helped sell the worm-of-corruption angle better; a brief and barely-articulated fantasy of taking over as Cardinal and really fixing the problem whispered to Nossos in the dark of the night would have gone a long way to sell the idea that this is something Ambrose actively chose rather than just sort of had happen to him.

Quibbles aside though, there’s some excellent stuff in here when Annandale is just riffing on themes, or presenting imagery – the closing quarter or so as the planet completely goes to shit and Ambrose loses all restraint are wonderfully depicted, and the closing scene with the final victory of Chaos is very well done. The character descriptions are also well-balanced, with a few choice phrases sketching out the exact feel of all the key individuals – getting across a strong feel for the characters on the page in a short piece like this is important, and everyone who matters here stands out on the page.

Is this worth picking up? Hard to say. It’s something of a 6/10, with a lot of quite pedestrian stuff and an utterly predictable plot interspersed with some scenes that really sparkle. If you’re a Warhammer Horror completionist you’ll enjoy it just fine, or if you’re keen to take another trip through the key beats of “corrupted Imperium seals its own doom” then this is a fine example of that. If you’re more of a generalist reader who’s mainly into Black Library for vigorous Space Marine battles, you can probably afford to skip this one.